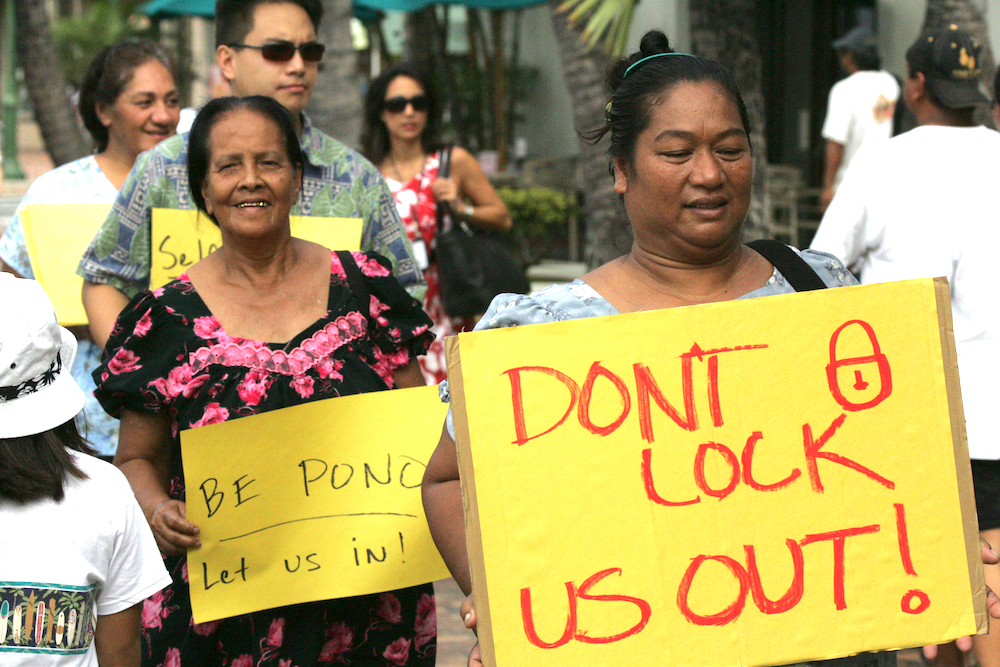 Residents of Honolulu's Kakaʻako homeless shelter picketing at the Waikiki Beach Marriott Resort & Spa in 2006. Some Micronesians who migrate to Hawai‘i in need of medical care or education find the cost of living unaffordable. Photo by Craig T. Kojima. Courtesy of the Honolulu Star-Advertiser.

With its multitude of ethnicities, cultures, and languages, Hawaiʻi might appear at first glance to be a post-racial society. The predicament of Micronesians in Hawai‘i, however, gives the lie to that myth. What’s more, Micronesians must pay for their second-class status through their health, already affected by nuclear weapons testing, because of the state’s discriminatory health policies.

Micronesians, mostly from the Republic of the Marshall Islands (RMI) and Chuuk State in the Federated States of Micronesia (FSM), are the newest group of migrants to Hawaiʻi. They come in search of opportunities: better education for their children, better jobs, and better health care. In this way, they are no different from other immigrants who preceded them. Only the Kanaka Maoli (Native Hawaiian) people are indigenous to KaPaeʻaina, the Hawaiian Islands. The rest of us are settlers and some of us are colonialists.

Those who have come before control the political economy. Lacking marketable skills, many Micronesians end up with minimum-wage jobs: dishwashing, serving fast food, hotel housekeeping, or attending parking lots. The high cost of housing forces them to stay in public housing or in crowded housing conditions in neighborhoods where their children attend underfunded public schools.

The slights suffered by Micronesian migrants—from name-calling in the schoolyard to maltreatment by law enforcement—have been many. But the bigotry and backlash against them did the most damage when they provided the inspiration to exclude migrants from Medicaid, the federal health program for the indigent.

This is a recent story of how a group of people, living in the United States, were reduced to second-class status.

In 2009, in the face of budgetary constraints during the Great Recession, the State of Hawaiʻi removed from the Medicaid rolls all migrants from the Compact Nations (the Marshall Islands, the Federated States of Micronesia, and Palau), who are permitted by a compact with the United States to live and work here. A court battle ensued, in which a federal district judge ruled that Micronesians and their allies were entitled to Medicaid benefits under the U.S. Constitution’s equal protection clause. Subsequently, the 9th Circuit Court of Appeals reversed the decision. And so the state rolled out its plan to remove the migrants from Medicaid.

I am a family physician in Hawaiʻi who has learned firsthand about the special health challenges of these migrants. Over the years that I have taken care of Micronesian patients, I have had a number die from hematological or thyroid cancers, legacies of nuclear testing in Micronesia. The scale of that testing is stunning. The total yield of U.S. nuclear tests in Micronesia between 1946 and 1962 was 152 megatons. The total yield of all the tests at the Nevada Test Site was one megaton. The nuclear bomb dropped on Hiroshima (my hometown) was 15 kilotons.

The most powerful detonation that the U.S. conducted was the Castle Bravo test of March 1, 1954, at Bikini Atoll in the Marshall Islands. As the thermonuclear device was encased in uranium, which underwent fission, the test released extraordinarily dirty radionuclides. This fallout was deposited over the populated atolls of the Northern Marshall Islands.

Afterward, Marshallese people who had been exposed were followed in a U.S. government study called Project 4.1. (That Project 4.1 was included in the planning documents, from fall 1953, four months before the test, demonstrates that the human experimentation conducted on Marshallese people without their knowledge or consent was deliberate.) Over the subsequent decades, this cohort of people, including children, were subjected to human radiation experiments—again without their knowledge or consent. Is it any wonder that many Marshallese believe that their human rights were ignored because they were viewed as less than human?

Over the years that I have taken care of Micronesian patients, I have had a number die from hematological or thyroid cancers, legacies of nuclear testing in Micronesia.

Despite the toll of these tests, there is another, larger factor in the social production of disease for Micronesians: population displacement from land. Traditional food production, based on indigenous plants and reef resources, has been abandoned, creating an unhealthy dependence on poor-quality, commodity foodstuffs such as white rice and canned meat. Ironically, many now prefer canned fish to fresh fish. The result has been an epidemic of obesity, diabetes, cardiovascular disease, and other non-communicable diseases such as cancer.

Now with global warming and sea-level rise, life in Micronesia is becoming more precarious. Much of Micronesia, including all of the Marshall Islands, consists of low-lying atolls with an average elevation just a few feet above sea level. It isn’t only the inch-by-inch rise in sea level that poses the greatest threat. With more severe weather come storm surges and higher waves that inundate croplands with saltwater. These gardens are used to produce taro—a Micronesian staple crop—and when they are flooded with salt water they cannot produce taro again unless they remain salt-water free for five years. Father Francis X. Hezel, the foremost scholar of Micronesia, says it is questionable how much longer human habitation will be possible in the remote islands.

While the compacts allow the citizens of Micronesia, the Marshall Islands, and Palau free entry to the United States and the right to work without a visa, there is no pathway to permanent residency or citizenship. The current compacts between the United States and the Marshall Islands and the Federated States of Micronesia end in 2023, encouraging many to migrate before its expiration. These days many Marshallese skip over Hawaiʻi and settle in Northwest Arkansas, where there are many jobs in chicken processing, the cost of living is lower, and they feel more welcome.

Since Compact Migrants in Hawaiʻi were removed from the Medicaid rolls, many have become uninsured. This makes it more difficult for me to take care of their medical needs. It is difficult enough to deliver medicine to vulnerable populations. It becomes more difficult when the state ignores the human right to health.