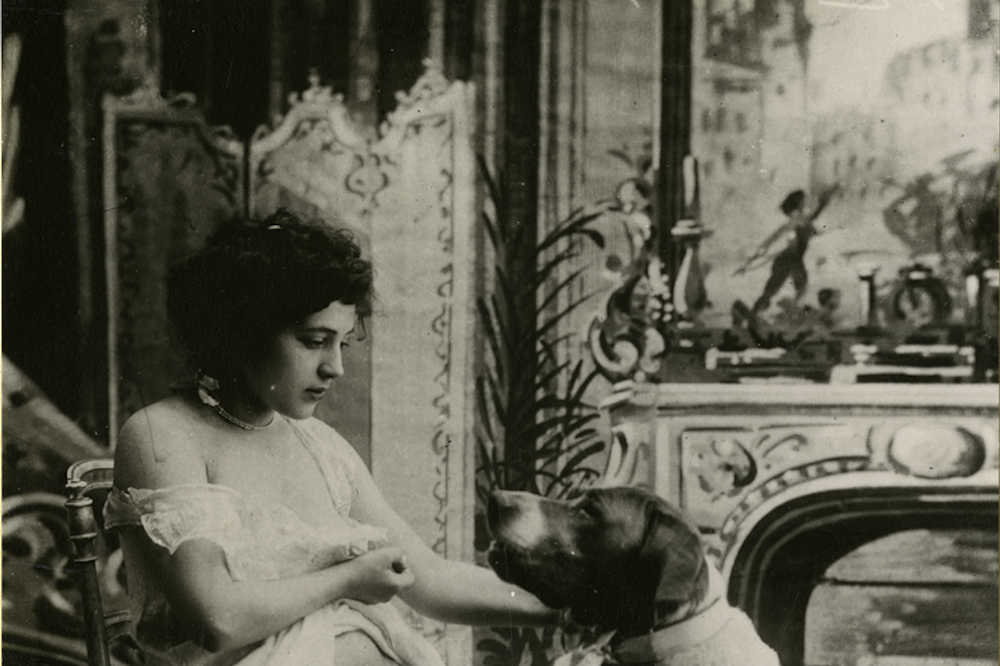 Lulu White, the most notorious madam in the turn-of-the-century Big Easy. Courtesy of the Collections of the Kinsey Institute at Indiana University. All rights reserved.

In 2016, music and pop-culture idol Beyoncé released the album Lemonade to rapturous reviews. As a historian of New Orleans, I was especially intrigued by the video for one of the songs on the album, “Formation.” The video includes iconic images of the city: Katrina flood waters and post-flood graffiti; “second-lines”; marching bands; crawfish eating; and even a dancing “Mardi Gras Indian.” As we move through various neighborhoods, we visit a church service, a St. Charles Avenue mansion, and, in what appears to be a move through time into the city’s past, a bordello.

The bordello scenes in the video recall famous photographs from Storyville, New Orleans’s notorious red-light district, which flourished from 1898 to 1917. And while the song is clearly about Beyoncé, the persona she embodies in it resonates with an earlier iconic black female: Lulu White, the self-styled “Diamond Queen” of New Orleans’s turn-of-the-century demimonde. Knowing Lulu White’s story helps us see Beyoncé’s artistic creation within a complex historical framework, for in it are woven together threads of American history: stories of sexual slavery and prostitution; revolution and exile; and, not least, capitalism and the American Dream.

Lulu White was the most notorious madam in Storyville. She earned fame and fortune as the “handsomest octoroon” in the South, and her bordello, Mahogany Hall, featured “octoroon” prostitutes for the pleasure of wealthy white men during one of America’s most virulently—and violently—racist periods. It was also the dawn of consumer culture and the beginning of modern advertising. Thus, Lulu White crafted a persona for herself through stories that had long circulated in New Orleans; she repackaged those stories to create what today we would recognize as her brand.

The first story in White’s compendium was that of the “tragic octoroon.” The word “octoroon” describes a person who is seven parts white, and one part black. By the 1890s, the female octoroon was already a stock character in literature, having entered public discourse as part of antislavery efforts to highlight the moral and sexual depravity of the South. The label “octoroon” actually told a story about the women it described: in it their fathers were always white, and the “black” (enslaved) mothers always got successively lighter, finally producing a white-looking “octoroon.” Even in spite of paternal wishes, their daughters remained in slavery, where their light skin added to their value in the sexual slave market. The octoroon often takes her own life rather than submit—hence the “tragedy.”

The most famous abolitionist novel featured the “tragic octoroon” trope. In Uncle Tom’s Cabin, Harriet Beecher Stowe described Eliza as the picture of feminine perfection, with her “rich, full dark eye,” “long lashes,” and “ripples of long silky black hair.” The reader encounters Eliza through the eyes of a visiting slave trader. “The brown of her complexion gave way on the cheek to a perceptible flush, which deepened as she saw the gaze of the strange man fixed upon her in bold and undisguised admiration.” The trader offers to sell Eliza in the New Orleans slave market. In spite of the “brown of her complexion,” she was fair enough to pass. “You would scarcely know the woman from a white one,” remarks one of the characters.

Even as stories of tragic octoroons protested slavery, they reinscribed “race.” Neither “octoroon” nor other terms, like “mulatta” or “quadroon,” were meant to be precise; the point was “one drop” of “black blood” producing something hidden deep under white skin. This played into a prevailing 19th-century stereotype of upper-class white ladies as sexually pure, pious, and submissive; black women, free or enslaved, were imagined as the opposite—sexually passionate and depraved. The very word octoroon evokes white male racial and sexual domination over several generations, with a prurient twist. The octoroon’s dormant black blood held the promise of intense, and forbidden, sex. She may have looked “white,” but, to quote Beyoncé, she had “hot sauce in her bag.” By incorporating the story of the octoroon into her brand, Lulu White reoriented her tragic fate into a modern sexual fantasy, and promised its fulfillment at Mahogany Hall, also known as the “Octoroon Club.”

The second story White wove into her brand was that of the Caribbean diaspora in New Orleans, which she used to confound her own racial status. White was born in Alabama, but she often claimed to be from the West Indies. After a racetrack refused her entry, a newspaper reported White’s complaint that “some people take her to be colored, but she says there is not a drop of Negro blood in her veins. She says that she is a West Indian, and she was born in the West Indies.” White thus asserted control over her narrative by playing on the illegibility of race in New Orleans.

Knowing Lulu White’s story helps us see Beyoncé’s artistic creation within a complex historical framework, for in it are woven together threads of American history: stories of sexual slavery and prostitution; revolution and exile; and, not least, capitalism and the American Dream.

What did “West Indian” mean there? Several things. New Orleans had a large Caribbean-descended population, stemming from the migrations during the French Revolution, through what became the Haitian Revolution in 1804, and then exile from Cuba several years later. All tiers of Caribbean society entered New Orleans—free whites, enslaved blacks, and free people of color—adding to a diverse population that already had a substantial percentage of free people of color. New Orleans, unlike the South as a whole, was a three-caste society, where one’s “race” did not always accord with “free” or “enslaved” status or, later, heritage. There are instances on record of Creole women suing for libel after being labeled “colored.” White’s assertion of West Indian provenance left her “race” ambiguous.

It also increased her value, because when it came to women, “West Indian” signified sublime, ineffable beauty, seemingly created by the mixture of races and the environment. The New Orleans writer Lafcadio Hearn described the type as “certainly” among “the most beautiful women of the human race,” having “inherited not only the finer bodily characteristics of either parent race, but a something else belonging originally to neither, and created by special climatic and physical conditions.” Antebellum travelers to New Orleans rhapsodized at great length about the beauty of New Orleans “quadroons.” Some of these women participated in a kind of institutionalized concubinage, whereby they entered contracts with white men. The terms of the contract, Frederick Law Olmsted remarked, varied “with the value of the lady in the market.” The female creoles of color were thus imagined as quasi-free “tragic octoroons.” Instead of being fated to sexual slavery, these women were thought to “pass their life in a prostitution,” in the words of another visitor to the antebellum city.

Lulu White’s claim to be at once West Indian, not “Negro,” and “octoroon,” blurred the matter deliberately. In a sense, she claimed both the heritage of white male creoles and of their female creole of color mistresses. This blurring was integral to White’s brand, a selling point for her business. Perhaps Beyoncé is drawing on some of this history, too: “My Daddy Alabama; Momma Louisiana; you mix that Negro with that Creole make a Texas Bama.” Lulu White turned the history of Caribbean “creoles” in New Orleans to her own use at Mahogany Hall, where light-skinned black women were literally prostitutes. White was the proprietress there; she determined the value of the lady in the market.

This brings us to the third story White’s brand comprised: the self-made man. The story of the self-made man is among the oldest in American culture, beginning at least as early as Thomas Jefferson’s fabled yeoman farmer, and, of course, Alexander Hamilton. The turn-of-the-century version still reassured Americans that by hard work, honesty, and a bit of luck, anyone could rise from humble circumstances to achieve greatness—or at least a comfortable living. Northern businessmen had long come to New Orleans to make their fortunes. The New South desire to develop the region along the lines of Northern industry created new opportunities for strivers. Lulu White’s self-promotional brand encompassed the men she sought for customers. She could make their (American) dreams come true at Mahogany Hall—as she had her own. 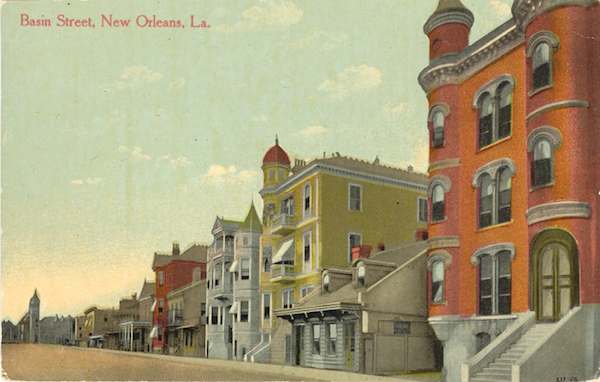 White’s narrative of self-made success presented a distorted, winking reflection. She was a woman of color; her business was selling sex. Yet, it scarcely mattered that “legitimate” New Orleans did not believe White’s self-creation myth. Her customers were unlikely to have believed it themselves. A promotional pamphlet touting the success of “this famous West Indian octoroon,” described Mahogany Hall as having cost $40,000 to erect, and called it “unquestionably the most elaborately furnished house in the city of New Orleans, and without a doubt one of the most elegant palaces in this or any other country.”

White operated in a netherworld of transgressive pleasure that flouted the morality of respectable society. Lulu White, the brand, was not diminished by newspaper reports deriding her and calling her “negress”; the notoriety amplified her appeal. And men seeking sex with lovely “octoroons” knew just where to go. As the historian Roland Marchand explains about the dawn of the consumer age, “popular convention permitted advertisers to exaggerate, as if all their statements were placed within qualifying ‘quotation marks.’” Lulu White’s keen marketing sensibility predicted the transformations in American mass culture ahead of their time.

Long before Beyoncé sang, “I dream it, I work hard, I grind ’til I own it,” Lulu White built a similar narrative of self-made ascendancy, and even a brand that allowed her to profit from the interweaving of historical narratives. And Beyoncé continues to play with these ideas, so that while her success is premised in part on her sexuality, no one imagines that she’s literally a prostitute, or that she’s really treating her lover to dinner at Red Lobster. Rather, Beyoncé embodies a fantasy, crafted from multiple stories, tinged with the hard realities of racial, sexual, and economic subordination, but, in the end, triumphant.

To be sure, the similarities between White and Beyoncé can be overstated. Lulu White was a real madam who trafficked in young women and girls for the purposes of prostitution; Beyoncé reimagines that role to inhabit all at once the prostitute, the madam, and even the pimp, while embodying a brand that is at once autobiographical and relatable to her millions of fans. If White pioneered this kind of self-packaging, Beyoncé, also known as “Queen,” perfected it.

Lulu White died in obscure poverty in 1931. But her brand has been revived over the years as an emblem of a mythic, romanticized Storyville. The older stories persist, too. At the end of the “Formation” video, Beyoncé lies atop a police car floating in the Mississippi River. She sings as the car sinks into the deep, an homage, perhaps, to the tragic octoroon.