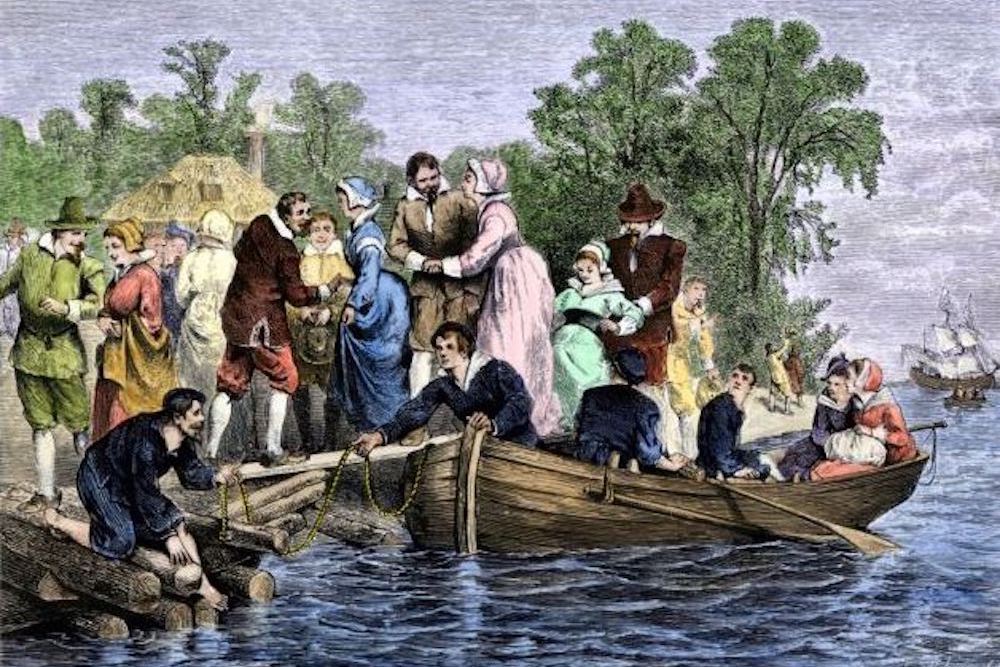 “Wives for the Settlers of Jamestown," by William Ludwell Sheppard, 1876. Courtesy of the New York Public Library.

The history of government-sponsored matchmaking in the United States is a long one, with roots in the very founding of the colonies. In his account of life in the early Virginia colony, John Smith depicts a land teeming with sexually available Native American women, where a young Englishman like himself could expect to have several fighting for his affection. Describing a visit to the village of Pocahontas’s father, Powhatan, he wrote that he was greeted by “30 young women [who] came naked out of the woods (only covered behind and before with a few greene leaves) their bodies all painted, some white, some red, some black, some partie colour.”

Smith’s account of his time in Virginia undoubtedly appealed to many would-be colonists, but the Virginia government was less enthusiastic, outlawing most English-Native American relationships. Still, they recognized that such prohibitions would have little effect if they did not offer alternatives. As a result, the government declared its intention “to plant [the colony] with women as well as men” and embarked on an ambitious plan to send ships of unmarried Englishwomen, later known as “tobacco brides,” to the Virginia colony.

Today, American men are once again facing a lack of potential marriage partners, for entirely different reasons. American women have more choices, both economically and socially, than ever before, which allows them to reject men their grandmothers might have married (or been forced to marry). This has been a primarily positive change for women, but not always for the men left behind. In his book The Decline of Men, Guy Garcia describes these changes, writing, “Men are opting out, coming apart and falling behind. They are losing their sense of place in society and their direction as individuals.”

One answer for these men is to simply advise them to adapt, to work harder, dress better, and wash more dishes if they wish to remain desirable to American women. However, if some men can’t or don’t make these changes, does this mean they must be romantically written off?

At various points in American history, gender disparities have occurred that impeded the formation of romantic partnerships, leading the government to step in. Historically, these disparities were usually caused by the uneven geographical distribution of men and women, unlike modern disparities, which result from the changing status and expectations of women. In both cases, men seeking relationships exceed the number of women available or interested in them as marriage candidates, resulting in a large population of unhappily single men. Throughout U.S. history, the government has made many efforts to reduce gender disparities and assist with partner redistribution. And while the idea may seem quaint or bizarre in the age of Tinder, it’s worth looking at how those programs worked in the past and which ones might be worth reconsidering.

Not all government matchmaking attempts were the same. While the 17th-century bride ships were a national effort, there have been many other initiatives on the state and municipal level, through various forms of legislation and administrative agencies. Some of the most significant assistance occurred after Western expansion, the California gold rush, and the Civil War left large regions of the country highly gendered.

In the late 19th century, men far outnumbered women in the West, while the reverse was true in Eastern states. Western men became increasingly unhappy with the lack of available marriage partners—meaning white women—and as a result, state and territorial governments began discussing ways to bring these women west. However, such concern and assistance was limited to white couples. At the same time, the state and territorial governments were bringing white women west, they were also seeking to prohibit the immigration of most Asian women.

At the state level, many solutions to the marriage crisis included enacting legislation benefiting women, such as liberal marriage and divorce laws, martial property reform, and women’s suffrage. It is no coincidence that male-heavy Wyoming was the first state to give women the right to vote. The Wyoming legislature was quite explicit about its motivations, stating that members enacted suffrage because “the territory desperately needed immigrants, particularly the feminine variety.” Economic incentives and various criminal protections were also commonly proposed.

By the turn of the 20th century, the geographic gender disparity had been largely remedied, yet the belief that the government had an obligation to facilitate matchmaking remained strong. In fact, demand for government-assisted matchmaking among men and women was so widespread that cities began creating their own matrimonial bureaus. Cities like Des Moines, Omaha, and Los Angeles all ran large municipal matrimonial offices. The one in Los Angeles was set up in 1907 by Mayor Arthur C. Harper, providing free matchmaking services to single men and women, and according to a Los Angeles Herald article entitled “Life Partners for the Asking,” it was populated by numerous “men and women ready and anxious to marry” whose only “trouble has been the lack of opportunity.”

The Des Moines matrimonial bureau, which described itself as “a clearing house for lonely souls,” was run through the mayor’s office and advertised its services to all “men and women desirous of securing a helpmate.” Interested women were told to send “their address, their age and description. A photograph must accompany the description. Men must furnish reference from their banker, minister and postmaster.” The bureau emphasized the serious nature of its services by noting that “Beauty will not be taken into consideration in the classification of feminine applicants.”

Demand for government-assisted matchmaking among men and women was so widespread that cities began creating their own matrimonial bureaus.

Singles living in places too small for local government intervention began requesting help from their elected representatives. In 1910, the press secretary for Speaker of the House Joseph Cannon mentioned to a reporter from The New York Times that Cannon had received a letter requesting matrimonial assistance. Shortly thereafter, the Congressman found himself inundated with similar letters from singles throughout the country. Others began requesting the creation of a national marriage bureau.

One such demand came from the editorial board of the Otter Tail Press, a newspaper based in Otter Tail, Montana. After reprinting a story about the thousands of poor single women and girls struggling to live in New York, the newspaper penned an editorial calling for the “formation of a national association with branches everywhere whose object shall be the collection of statistics showing the relative population of the sexes in every city” and “for distributing the women fairly and evenly over America.” Other papers, such as the Anaconda Standard of Montana, heartily agreed with the Otter Tail’s sentiment but suggested that such an important organization should not be left to individuals; rather, they suggested it be made “a distinct department at Washington in charge of a cabinet officer.”

A national marriage bureau never materialized, but government involvement in partner redistribution did not disappear. In fact, today’s family-based immigration laws providing immigration priority to the spouses, fiancés, and fiancées of American citizens continue this tradition. Through these laws, the government encourages lonely Americans to expand their pool of potential partners beyond the borders of the United States.

These relationships, often derisively called “mail-order marriages” are a form of partner redistribution, but it is far from a dystopia. In fact, studies indicate that due to government involvement in these relationships and the various protections and incentives provided, foreign women typically benefit from these marriages. For example, as Zina, a young bride from Russia, explained, “In Russia, all the men know what women’s obligations are—to sew, to cook, they know that by heart. But they have no idea whatsoever, what their obligations might be. Here [in America] it is just the opposite. The men know what is wanted of them and what their obligations are.” Other foreign brides typically echo these sentiments while also adding additional ones such as American men’s willingness to marry older women, divorced women, and single mothers. Consequently, despite the stereotype of the desperate and exploited mail-order bride, these relationships can actually be empowering for women.

American women tend not to seek spouses through dedicated international matchmaking services, but many still take advantage of laws permitting them to fast-track the immigration of a foreign fiancé or spouse. Similarly, since Obergefell v. Hodges was decided, LGBTQ men and women have also started taking looking outside the United States for potential marriage partners.

Violent assertions of a right to sex or a partner, as has happened in recent months, are undeserving of sympathy. But the idea of addressing and reducing loneliness is valid. There was a time when the government took the romantic concerns of single people seriously, and it may be time to do so again. Today’s plethora of internet matchmaking services means the need for government-sponsored marriage bureaus no longer exists, but modern government can still play a part in aiding marriage redistribution. This role could range from providing tax credits for using matchmaking services to offering travel and relocation subsidies for men and women interested in moving to areas with better marriage prospects (similar to Vermont’s recent efforts to increase its population). Such measures would demonstrate the government’s ongoing support for marriage, as well as its recognition that these relationships play an integral part in many people’s happiness and well-being.