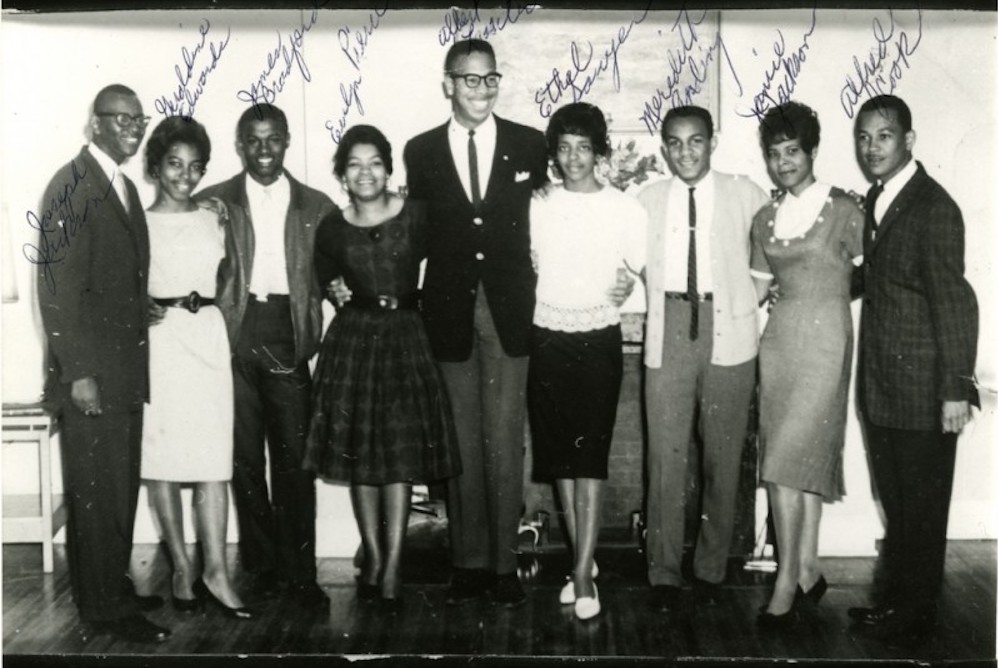 Autographed photo of the Tougaloo Nine, the black college students who helped desegregate the public library system of Jackson, Mississippi. Courtesy of Mississippi Department of Archives and History.

Historians of the civil rights era, between 1954 and 1968, have crafted an impressive body of literature focusing on the resolve of young black community activists who bravely resisted racial discrimination at lunch counters, on buses, and in countless other public venues throughout the Jim Crow South. But one particular site of their valor has remained largely hidden in the historical record: public libraries. Ubiquitous civic agencies that for nearly a century had justified local taxpayer support as valued educational institutions because they were “free to all,” libraries remained segregated in America’s South into the 1960s.

The complexity of the struggle to desegregate public libraries can be seen in the way it played out very differently in two Southern cities: Jackson, Mississippi, and Birmingham, Alabama. In Jackson, nonviolent protest unleashed brutal white violence against blacks, and was resolved only by means of federal intervention and the National Association for the Advancement of Colored People’s filing of a class action lawsuit. In Birmingham, despite initial pushback from whites, public libraries were desegregated surprisingly quietly and relatively peacefully, though the city would soon be reeling from a series of bloody confrontations elsewhere.

In Mississippi, the participants in the struggle included a band of courageous black college students called the “Tougaloo Nine.” Named after the historically black Tougaloo College, a private, liberal arts institution that had been founded by Northern Christian missionaries to educate free slaves and their descendants, the Nine were highly disciplined and organized, and used the tactics of nonviolent resistance to draw attention to the institutionalized racial discrimination and inequality around them.

Shortly after opening the Jackson, Mississippi Public Library on March 27, 1961, the white director was asked by two newspaper reporters if she was aware that a group of black students was coming to the library that day. She was not, she said, but after the reporters left she immediately phoned the police. “Contact us when the students arrive,” they responded. Unbeknownst to the director, while she was talking to police, the nine Tougaloo College students—four women and five men, and all members of the NAACP—were preparing for Mississippi’s first sit-in demonstration. NAACP mentors told all to dress well, sit quietly in the library, and avoid violence.

The four women wore dresses, the men dress shirts and ties; some added sport coats. First they visited Jackson’s George Washington Carver branch, which served blacks, and requested books that they knew were not there. At about 11:00 a.m., they walked to the main library.

“I went into the library and I stood up by the card catalog and was thumbing through it,” Ethel Sawyer later recalled. “After I didn’t see the…title of the book I wanted, I went over and sat at one of the tables…until the time I was interrupted.” Albert Lassiter stood in front of the card catalog with a clear view of the front door. “I had seen what a billy club could do to a guy’s head, so I positioned myself so I could see the blows coming. I didn’t want to get a blind shot.”

Ten minutes passed. During that time, the librarian called police, then approached the students, asking if she could help them. We’re doing research, they responded. She suggested that they visit one of the two black branches. Immediately thereafter, a group of policemen came in and told the students to get out of the library. But “nobody moved,” Sawyer said. About a minute later, the police chief told them they were under arrest. Six officers placed all the students into squad cars, and at the station charged them with breach of the peace.

In jail that evening, Tougaloo students worried. “Reflecting back on Emmett Till, the history of lynching connected with Mississippi,” Joseph Jackson told an OC Weekly reporter in 2015, “the later it got that night, I was in fear of my life.” He began rehearsing what he would say if the Ku Klux Klan came for them. “Please, Mr. Klansman, don’t hang me. I have a wife and two little children in Memphis, and if you release me this night, I promise you I will never, ever come back here to Jackson, and violate your Jim Crow laws.” “Well, that sounds very good,” one cellmate responded, “but you know what the Klansman would say? ‘N—–, you should have thought of that before you entered our segregated public library!’”

Several days later, the students were taken to the courthouse to be tried, and, again, reporters were ready. So were a hundred supporters who cheered the “Tougaloo Nine.” When the crowd began to applaud the students as they arrived for their trial, the police chief yelled, “That’s it! Get ‘em!” Police then set upon the crowd with nightsticks and dogs, as once again reporters captured the event with cameras snapping. In the melee, NAACP representative Medgar Evers and several women and children were beaten, two men were bitten by the dogs, and an 81-year-old man suffered a broken arm when police beat him with a club.

To describe the melee, white segregationists defaulted to their canned response. In his daily column, a Jackson newspaper staff writer complained, “A quiet community has been invaded by rabble-rousers stirring up hate between the races, and following are the…publicity media feeding an integrated North the choicest morsels from the Mississippi carcass.…The Negro who has so long held the guiding and helping hand of the white,” he warned, “may lose that hand as he climbs the back of his benefactor and teacher to shout into halls where he is not welcome.”

Amid the din, the Tougaloo Nine went to trial. They were quickly found guilty of breach of the peace. Each student was fined $100, and their 30-day sentences were suspended on condition that they “participate in no further demonstrations.” None of the students testified, but a police captain said they had been arrested because their presence at the library could have caused “trouble.” Medgar Evers later argued that the brutality exercised on those black supporters set into motion the broader desegregation activities in Mississippi. On January 12, 1962, the NAACP filed a class action lawsuit and five months later a federal judge ordered the Jackson Public Library to desegregate.

In Alabama, the desegregation of Birmingham’s Public Library progressed quite differently.

In early April 1963, Southern Christian Leadership Council Executive Director Wyatt Walker recruited fair-skinned Addine “Deenie” Drew to pass as white and case the downtown library to prepare for a public library sit-in. Attired like a middle-class white, in blue and white silk dress and hat, she entered the library unhindered, walked through reading rooms and stacks, and after noting all entrances and exits, left the building to call Walker from a pay phone across the street. The experience was so traumatic, she later recalled, she had to “look down at my feet and tell them to keep walking.” On April 9 she and other black students entered the library, and sat reading at desks, undisturbed. Whites stared, but said nothing. When librarians took no action, students left quietly.

Disappointed that they had provoked no incident, Walker planned a second sit-in the next day. He told 12 students to approach the library that afternoon, and asked Shelley Millender, a student at Miles College, another historically black school, to speak for the group once they got inside. As they approached the library two white men came up to Millender. “I was really afraid that day,” he later recalled. If violence occurred, he hoped the media would be there to photograph the incidents. He was unaware the two men were newspaper reporters whom Walker had tipped off. They followed him into the library, and as the other students gathered, Millender spoke to librarians at the circulation desk.

Birmingham had a library for Negroes, the librarian said; Millender should go there. Millender and the librarian then had “quite a little skirmish in terms of rhetoric,” he later recalled, and when finished, Millender sat at a desk with several other students. Police came, but after several phone calls and much muffled conversation refused to arrest them. Forty-five minutes later students left “voluntarily and without incident or disturbance,” the library director later told his board, although when they walked through a crowd of young whites, some uttered remarks like “it stinks in here,” and “why don’t you go home?” “We were there to get arrested,” Millender said; when that did not happen, they saw no purpose in staying.

At a quickly assembled board meeting the next day, the library director wanted approval of his actions the previous day and guidance for what he perceived would be inevitable future sit-ins. The board discussed alternatives, and although it rejected any use of the library for sit-in demonstrations, it approved the director’s actions and unanimously passed a resolution that “no persons be excluded from the use of the public library facilities” because of race. The very next day, Birmingham’s Commissioner of Public Safety, Eugene “Bull” Connor, arrested Martin Luther King Jr. and 132 other protesters, and in subsequent weeks, millions of television viewers across the county watched Connor’s minions using fire hoses and police dogs on black demonstrators. Then, on September 15, the nation was shocked when four adolescent black girls attending Sunday School died in the bombing of the Sixteenth Street Baptist Church.

By “quietly desegregating” in the midst of a violent summer, the Birmingham Public Library actually functioned as a lone mediating site for facilitating racial reconciliation. Perhaps board members approved the effort to counter the national image of violence Connor helped create for their city; perhaps they feared cameras capturing and news media reporting on similar violence in their library. At a July board meeting, the library director reported a distinct increase in the number of blacks using the main library facilities, and particularly the formerly white branch closest to a black neighborhood. When the director testified in court in December, he reported that the Birmingham Public Library was an integrated institution. But the media—national and local—had largely ignored the library in its coverage.

For many years the activists who desegregated these libraries remained “hidden figures” in the history of the civil rights era and the South.

It wasn’t until June 24, 2018, that the American Library Association (the world’s oldest and largest such organization) formally recognized the activists and their struggle, by passing a “Resolution to Honor African Americans Who Fought Library Segregation” at its annual conference in New Orleans. The resolution apologized for the role the Library Association played in supporting segregated libraries and discriminating against African American librarians. And it commended, “African Americans who risked their lives to integrate public libraries for their bravery and courage in challenging segregation in public libraries and in forcing public libraries to live up to the rhetoric of their ideals.”