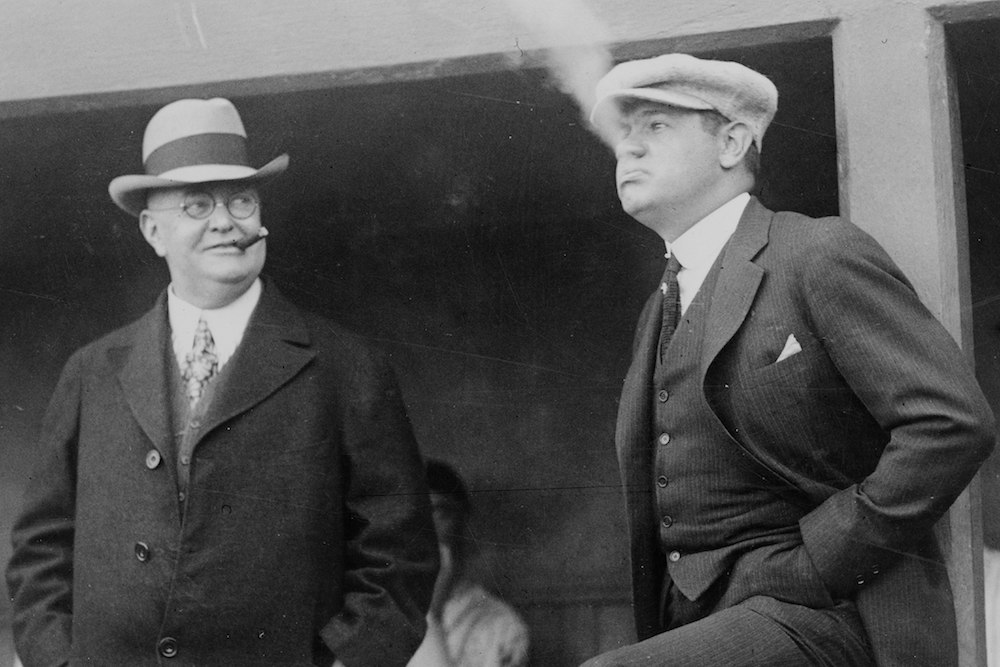 Ban Johnson, the first president of the American League, smoked cigars with Babe Ruth in 1922, before a game in Washington, D.C. Courtesy of the Library of Congresss/Wikimedia Commons.

Babe Ruth was baseball’s greatest hero. So why did the national pastime’s establishment turn against him?

The answer lies in the untold story of Ruth’s challenge to the authorities ruling baseball—a story that defies deeply held American myths about upward mobility and classless democracy.

Today, Ruth is most remembered as the benchmark for excellence. To be known as “the Babe Ruth of…” is to say that you are the dominant figure in some enterprise.

It also connotes popularity. As a baseball player, Ruth personified dominance and celebrity. Leading the New York Yankees between 1920 and 1934, he generated hysterical excitement among fans young and old, and drove the popularity of baseball and modern sports into a new era of commercialization and profitability.

Ruth had the type of American story that embodied the country’s democratic promise. He rose from abject poverty in Baltimore, essentially abandoned by his parents, to become a player of unsurpassed power and confidence—while maintaining personal warmth and generosity off the field that endeared him to fans. His moon face, barrel chest, and spindly legs made him an instantly recognizable, beloved figure. Ruth managed to bridge many of the chasms dividing America in the early 20th century. His appeal crossed regional, class, and even racial boundaries. His record-setting achievements—in a sport and a country given to empiricism—endured for generations.

But, in its darker moments, Ruth’s career also embodied a very American conflict—turning into a clash between a headstrong, independent-minded player and a powerful baseball establishment that wanted, or needed, to control him.

Ruth’s ascent to superstardom came at a propitious time for Major League Baseball. Gambling, violence, and labor strife had dogged professional baseball from its beginnings. The years surrounding World War I saw those forces grow to the point of jeopardizing the future of the game. A players’ union pushed back against dictatorial owners who maintained tight control over their labor force through mechanisms such as the reserve clause, which tethered players to their teams. Violence on the field and in the stands mounted, and revelations that gamblers had influenced the outcome of the 1919 World Series, too, imperiled the national pastime.

Then “Along Came Ruth,” to borrow from a popular Irving Berlin song that sportswriters often associated with the player. The Babe—a pitcher with the Boston Red Sox before he was traded to the Yankees in 1920—offered diversion and entertainment galore. He changed the game from a low-scoring affair based on strategy to one in which power-hitting—home runs in particular—ruled. Ruth’s home runs were frequent, epic, towering events. Fans loved the new game. Attendance soared throughout baseball in the 1920s, largely because of Ruth’s feats. Suddenly, a brighter future for the game showed through the dark clouds.

But Ruth also posed a problem for baseball. He was assertive, outspoken, sympathetic to player rights, and occasionally temperamental. While appreciative of his commercial potential, owners and league officials moved to rein in their superstar. None among the game’s elites wanted another Mike “King” Kelly or Ty Cobb—baseball heroes whose grave personal vices at times overshadowed their brilliant play.

Ruth’s popularity also posed a competitive threat. Major League Baseball had narrowly survived several recent challenges from rival leagues. If a competitor league could lure Ruth away, it would have instant credibility. Ruth’s lucrative offseason barnstorming tours suggested his potential. Accompanied by other star players, the Babe would play exhibition games across the country, going as far as California on occasion. The wildly popular tours underscored Ruth’s appeal, and the threat he posed to the league. He was becoming bigger than the game.

In response, baseball undertook a major campaign to contain and control its marquee player—to force him into line. Before the 1922 season, newly-appointed baseball commissioner Kenesaw Mountain Landis launched the official pursuit of Ruth. Citing the Babe’s failure to ask permission before launching a barnstorming tour, Landis slapped on Ruth a lengthy suspension of one month starting at the beginning of the 1922 season. The issue, huffed the commissioner, came down to “Who is Bigger: Base-ball or the Individual Ruth?” Landis was correct: this was an existential clash.

The Babe initially bitterly protested his sentence, but threats from the league and his lucrative new contract with the Yankees kept him in line. The 1922 season proved a disaster for Ruth. A batting slump lasted into June, and more suspensions, for fighting with umpires and clashing with hecklers, followed.

The media piled on, portraying the Babe as an enfant terrible. Sportswriters had emerged as invaluable allies for baseball owners and officials, who heavily subsidized their work. Teams covered reporters’ travel expenses to spring training, and road trips during the regular season. Writers enjoyed first-class accommodations in luxury hotels, traveled on Pullman cars, and ate at the best restaurants. In return, they largely parroted the official line of team owners and league officials.

So press accounts, while celebrating Ruth’s power at bat and skills in the field, also infantilized him. Ruth was portrayed as an overgrown boy, or an unruly adolescent in need of adult supervision. His profligate spending and penchant for a good time became favorite storylines of sportswriters. They often mocked his earthy personality and limited vocabulary. And, at their worst moments, writers played on shadowy rumors about Ruth’s racial makeup, mocking him as the “big baboon” or a “gorilla glanded baby.” Ruth chafed at the depictions, but he had little recourse against a system stacked against him.

In its darker moments, Ruth’s career also embodied a very American conflict—turning into a clash between a headstrong, independent-minded player and a powerful baseball establishment that wanted, or needed, to control him.

Ruth returned to form in 1923 with a comeback sparked by a towering home run on Opening Day for the mammoth brand new Yankee Stadium (also known as “The House That Ruth Built”). In 1925, however, the Babe’s troubles returned. During the preseason, Ruth issued a stinging public indictment of Yankee manager Miller Huggins and offered himself as the ideal replacement, once again landing in hot water with the league. Later, during a spring training exhibition tour, Ruth fell ill—most likely a victim of a virulent strain of the flu then sweeping the country—but continued to push himself to avoid disappointing fans who flocked to exhibition games. On April 7, 1925, he completely collapsed and was rushed back to New York for medical attention. False media reports of his death generated headlines around the world.

In New York, Ruth began recovering, but the Yankees slumped in his absence, and team officials moved to shift blame for the collapse onto the Babe. He had overindulged his appetite, went the story—consuming too many hot dogs. One Yankee official even peddled an unfounded story to reporters that Ruth’s true ailment was syphilis. By midseason, Ruth rejoined the team, but he was weakened and the Yankees still struggled. In late August, Huggins, now managing a seventh-place team and battling rumors he soon would be replaced, mounted a surprise attack on Ruth, slapping an indefinite suspension on the Babe for violating team rules. Furious, Ruth protested that the suspension amounted to a sorry effort to deflect blame for the Yankee collapse. He threatened to quit baseball, and a firestorm of negative press followed. Newspapers went as far as printing photographs of Ruth’s live-in girlfriend, under salacious headlines. (Ruth’s first marriage had collapsed, but he had resisted divorce.)

Ruth received major league baseball’s message loud and clear. After 1925, he focused on conditioning and controlling his weight, cooperating with Huggins and exemplifying good baseball citizenship. During the 1926 World Series, Ruth caused a media sensation when he promised to hit a home run for a seriously ill boy and socked three homers in the next game, supposedly sparking a miraculous recovery in the boy. Still, while he became a “reformed” man in his public dealings, at contract negotiation time Ruth could never resist taking shots at the unfair reserve clause system that then bound players to teams with no free agency. The only way to gain leverage was to threaten to quit baseball, but when Ruth made such threats, he faced the usual verbal assault from team owners and sportswriters.

He would never escape their ire. Despite the battle between Ruth and baseball, or maybe in part because of it, baseball by the late 1920s had become a much more stable and profitable game. Instances of violence, gambling, and labor strife seemed consigned to the past. In his final years as a player in the early 1930s, Ruth remained a fan favorite. But Yankee management still itched to free itself of the outspoken and expensive Ruth.

For his part, Babe made it clear that he hoped someday to manage a major league team, preferably the Yankees. This dream set the stage for the sad final act of Ruth’s career. In 1935, Yankee officials arranged a deal whereby they would release Ruth, who would then be signed by the struggling Boston Braves as a player/“assistant manager.” Ruth viewed the deal, which was brokered by Yankee management, as a shot at staying in the game and maybe, one day, managing. But over the course of the opening weeks of the season, Ruth came to realize his days as a player were done, and that the Braves had no intention of using him in a managerial role. In anger, Ruth quit the Braves, ending his playing career. He still wanted to be a manager, but Major League Baseball had a long memory, and he never got his chance. The belief that Ruth somehow presented a threat, that he was too independent to be trusted in inside circles, persisted until his death from cancer in 1948.

For all his wealth and popularity, Ruth remained an outsider, even in the sport he popularized. In this, he demonstrated the chasm between America’s stated ideals and its nastier realities. His poor background did not win him respect; instead, it made him suspect among baseball elites, who wanted less volatile stars who would mold the game into a middle-class institution. They had no use for the actual Babe Ruth—not for the young man who railed against baseball’s lopsided power structure, and not for the older Ruth who grew wary of the forces arrayed against him. In the end, baseball won its battle with Ruth—it exploited an icon for its own purposes while maintaining near absolute control over the game and its players.