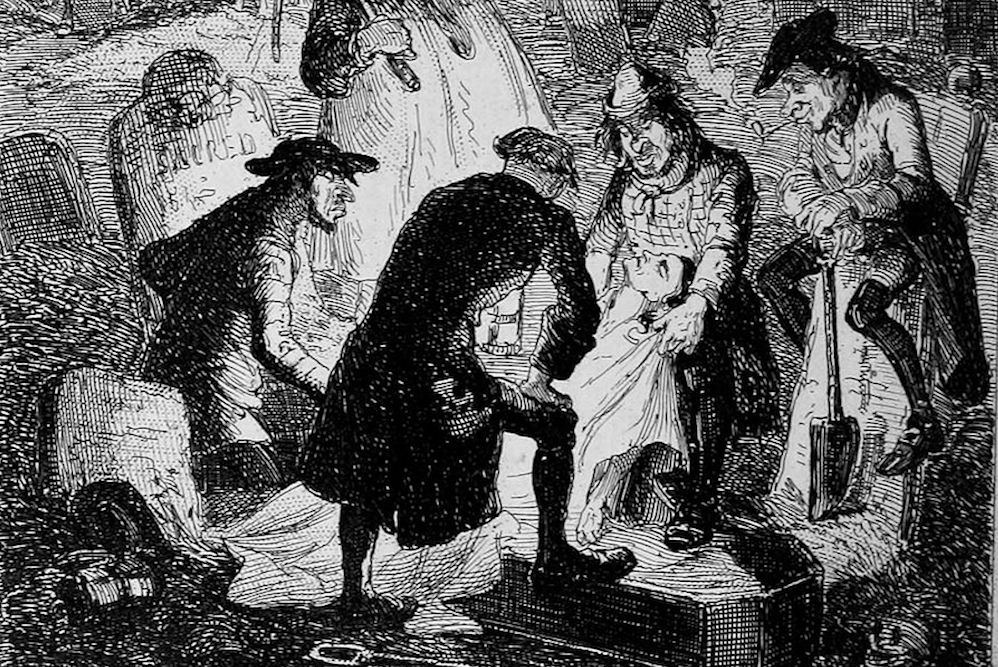 An 1887 illustration by British artist Hablot Knight Browne of “resurrectionists” stealing dead bodies from a graveyard. Courtesy of Wikimedia Commons.

Railroads changed everything. The formation in 1828 of the nation’s first common carrier, the Baltimore & Ohio Railroad, revolutionized transportation, altered people’s sense of time and place, and knitted America together into a nation.

Among the many unforeseen consequences of this transformation was this peculiar note: Body snatchers digging up graves could quickly ship corpses to medical schools needing dissection material. The story of how grave robbing flourished in Baltimore for more than 70 years reveals both the dysfunctional underside of medicine in a place that liked to call itself the “Monumental City,” as well as its racial fault line.

Baltimore became a center of “resurrections”—as grave robbers referred to their business—because a half-dozen medical schools in the city needed a steady supply of corpses. It also helped that the Maryland’s largest population center was located in a temperate zone that often allowed digging in winter when the ground in New England and in the Midwest froze solid.

The plunderers began by shoveling at the head of a freshly buried coffin, breaking the lid, placing a hook around the deceased’s neck or armpit and, with the help of a rope, easing the body out of the grave. For shipment elsewhere, the corpses were folded into barrels filled with whiskey—to mask the odor. At the destination, a medical school took the remains for dissection.

And that wasn’t the end of it: The “rotgut” whiskey was sold to all comers as “stiff drinks.”

Such pillaging, while technically a misdemeanor, was seldom prosecuted. Politicians protected it in the name of common good, and the police looked the other way, unless forced to take action. Lawyers argued that because the previous occupant had vacated the body, its ownership was in doubt. So why bother? There was no victim, or so lawyers contended, unless a cemetery sued, which never happened because many were in cahoots with resurrectionists.

An 1880 grave robbery brought Baltimore’s bodysnatching racket into the headlines for a time, highlighting the state university’s central role. The story began with Mrs. Elizabeth Joiner’s bad dream. Her niece, Jane Smith, had been buried earlier that evening and the more the Federal Hill matron tossed and turned, the more she became convinced that grave robbers had stolen the body afterward.

In the morning, the “handsomely attired lady” from a “wealthy and respectable family” went to Baltimore Cemetery, a 100-acre hillside necropolis that still exists at Gay Street and North Avenue. There in disturbed earth she found the evidence—a crucifix that Jane had worn to the grave when she was laid to rest next to her mother, who had died six months earlier. Now four robbers—all medical school janitors—had pillaged both graves. In the darkness, they first opened Jane’s mother’s grave by mistake. Reburying would take too much time, so they took her putrid remains along and the school used her skeleton.

Supervising this expedition was “Professor Jensen,” a 45-year old Danish medical student (he was still enrolled at the university) who dug up and sold corpses, shipping them as far west as St. Louis and south to Atlanta. He solicited advance orders for winter deliveries—“as a merchant contracts for pork and other goods,” one critic said—when the ground froze in the north.

No one admitted involvement. Dr. L. McLane Tiffany, the medical dean at Maryland, stated that “so far as his personal knowledge goes” no corpses of the description had been taken there. Then an anonymous postcard surfaced, saying that “two colored men” had taken Jane’s body to Davidge Hall, where the University of Maryland conducted dissections. Students there had gasped when they witnessed her naked nubility. Whoever the freckle-faced young woman was on the dissecting slab, she was nothing like the ravaged wretches that came from the potter’s fields. Even with her hair shorn, Jane Smith exuded “refinement,” The Sun wrote.

A grand jury indicted Jensen, along with Emil A. Runge, a white janitor at the University of Maryland medical school, and two “colored” dissecting room helpers, William Warren and Ezekiel Williams. The medical school dean, Tiffany, bailed them out. To defend them, the university provided one of the state’s most influential lawyers, John P. Poe. He was the law dean (soon to be attorney general), a white-supremacist Democrat who would expel black students from the university and impose segregation for decades. But then he defended grave robbers. Judge Campbell W. Pinkney, without a jury, found the accused men innocent. “The testimony implicated Jensen in the affair, but it was not such as to warrant a verdict of guilty,” he ruled.

Frequently, being involved in grave robbery had no adverse consequences to the culprit’s career. Dr. Randolph Winslow, the medical demonstrator at Maryland, had previously relied on Jensen’s services but when that source dried up, he began digging himself. He was apprehended at 5:30 p.m. one October afternoon in 1883, with a “colored” helper, shovels, and bags. Nevertheless, Winslow, a Quaker from a North Carolina plantation family, went on to an illustrious career as an eye and ear, nose, and throat specialist at the University of Maryland, becoming president of the American Surgical Association, the Southern Surgical and Gynecological Association, the Medical and Chirurgical Faculty of Maryland, and the Baltimore Medical Association. His papers are archived at the Smithsonian’s Museum of American History and include material about grave robbing.

The plunderers began by shoveling at the head of a freshly buried coffin, breaking the lid, placing a hook around the deceased’s neck or armpit and, with the help of a rope, easing the body out of the grave.

To be fair, grave robbing in Baltimore had been thriving for six decades before Johns Hopkins medical school opened in 1893. That year, 1,200 students in the city’s seven medical schools had to contend with a meager total of 49 cadavers legally received from official sources. Thus, from the first day onward, Hopkins was confronted with a shortage of bodies.

Its much-anticipated inaugural dissection on November 15 had to be delayed until a proper human “subject” could be found. “We postponed the work until the 16th and then the 17th, and late that evening a subject was mysteriously left in the basement,” recorded Dr. Franklin P. Mall, the famous anatomist.

A janitor was put in charge of securing a reliable supply of corpses. Nicknamed “King Bill,” William Hartley kept a sorrel mare, carriage, sleigh, picks and shovels in the basement of the anatomy building. Thus equipped, he and his wife roamed around searching for fresh graves or bodies left unguarded at the city morgue. His reputation grew—Hopkins soon had 20 cadavers in an ice box built to hold five.

This state of affairs did not happen on its own. As I learned while researching a new book on the life and legacy of Johns Hopkins, the school had anticipated the shortage of dissection material. Two years before it opened, university trustees proposed a solution that would have eradicated grave robberies and taken care of the various schools’ anatomy needs. Approved physicians would have been appointed to do postmortem examination in all cases deemed necessary, and Hopkins would have allocated dissection material to other schools. Although they would have benefited, its rivals howled in protest. “It would be in effect saying that only the Johns Hopkins Medical University shall teach anatomy,” declared James Aloysius Stewart, the city health commissioner.

Potter’s fields for the poor and forgotten were among other preferred marauding destinations, as was the Bayview Asylum, now a satellite medical campus of Hopkins. There in a section in the woods, simple pine boxes were laid out in open pits under a thin veneer of earth cover until a section filled up. Only then were the graves packed and sodded. Pickings were easy, and resurrectionists raided Bayview day and night, once in the middle of the asylum’s board meeting. Even today, old-timers who live near the Hopkins medical school remember having been warned as kids to be back home before street lights came on, or else “a John’ Hopkin’ doctor man will catch you and cut you up.”

The provenance of the early cadavers Hopkins acquired for dissection and distribution underscored how blacks were used a clinical material. “There was a predatory dimension to anatomical dissection, in part because the cadavers sent to Johns Hopkins belonged disproportionately to the poor black, and downtrodden,” writes the medical anthropologist Lynn Morgan.

Race also played a role in prosecutions for grave robbery, as can be seen in the 1886 case of a 28-year-old black man named John T. Ross, who murdered his mother’s white boarder, Ellen Brown, 60, and sold the corpse for $15 at the instigation of the mother’s live-in lover, a Maryland medical school dissecting room attendant. This is so far the only known incident of “burking” in the United States. The term commemorates Edward Burke, who killed at least 16 people and sold their bodies to medical schools in Edinburgh, Scotland before he was hanged in 1829.

The murdered Ellen Brown came from the Eastern Shore, where a brother owned the Easton Ledger newspaper. She drifted to Baltimore at the age of 50, working as a dressmaker. An alcoholic, she became addicted to morphine and opium. She panhandled around Lexington Market and roomed with blacks in a house on Pig Alley in a section near the university called Pigtown because it was a slaughterhouse district. She owed back rent.

After killing her, Ross confessed: “I waited until I got a good aim and hit her [with a brick]. She fell to the floor and then I jumped on her, and hit her again. Then I stabbed her.”

Some 900 curious came to gawk at Ross’s hanging. An hour before the noose and black hood were placed on him, he expressed his sentiments in a verse that a fellow inmate penned for him:

I’ve no excuse to offer,
My guilt I freely own,
But does it look like justice
I must suffer all alone?
Is it fair, kind Christians,
In this land of liberty,
That I alone must suffer,
And the other two go free?

The instigator, his mother’s lover Anderson Perry, indeed went free, and so did Albert Hawkins, another participant in the killing. Perry’s lawyers took a gamble with an all-white jury, arguing that Perry was too dense to do anything as complicated as organizing a grave robbery. “He is known to those who come in contact with him as an exceptionally stupid man,” lawyer John E. Bennett declared. The 60-year-old Perry himself declared: “The doctors will clear me.” And so they did.

After Ross’s hanging, Baltimore moved on but grave robbing continued. One June night in 1887, Dr. William T. Cathell, Jr., an assistant demonstrator of anatomy at the Baltimore University Medical School, was caught at 10:35 p.m. on a joyride of sorts, headed back to the dissecting room with a dead young black woman (and with three medical students). Drinking was involved. “The doctor and his companions had playfully stuck a pipe in the mouth of the corpse, which appeared to be enjoying a smoke,” The Sun reported. Cathell, “arrayed in a pair of high rubber boots and a hunting cap jauntily on his head,” drove “a large dayton wagon, drawn by a handsome pair of bay horses.” He said he needed a “subject” for his anatomy class. No prosecution followed such arrest.

It wasn’t until 1900—several years after the state Anatomy Board was created to allocate unclaimed corpses—that the trafficking ended. The board was headed by the Hopkins anatomist Franklin Mall. Bodies that could not be used immediately were kept in cold storage at Hopkins. Any school in good reputation was entitled to them.