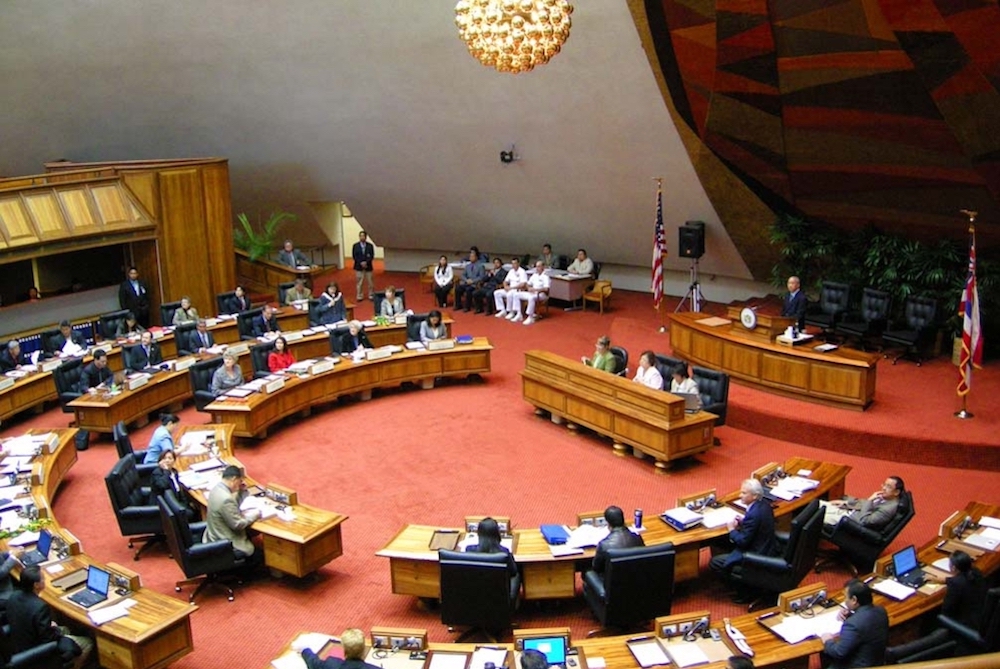 Legislators meet in the Hawai‘i state House chambers in Honolulu in 2008. Courtesy of Wikimedia Commons.

Most Americans have become accustomed to the bitter divide between Republicans and Democrats in Washington. Yet closely fought competition between the parties is the exception rather than the rule in many state capitals. In 34 states, a single party controls both houses of the state’s legislature and holds the governorship. In 1992, this state government trifecta existed in only 16.

No state is more dominated by a single political party than Hawai‘i. Today, there are no Republicans in Hawai‘i’s state senate and there are only five Republicans out of 51 members in the house. And Hawai‘i’s beleaguered GOP appears poised to lose yet another seat after November’s election.

This is nothing new. The Democratic Party has more or less governed Hawai‘i since 1954. That was the year when labor leaders and returning Asian-American veterans of World War II overthrew the ruling oligarchy of sugar planters.

Although individual Republican candidates—including two Republican governors—occasionally have found success by emphasizing their independence from the reigning Democrats, the nationalization of American politics is making that strategy less tenable, and not just in Hawai‘i. Republican and Democratic parties in each state are increasingly unable to distinguish themselves from the national parties in Washington. And in a diverse state like Hawai‘i, with the second-highest rate of union membership in the nation, the Republican Party’s shift to the right has made it nearly impossible for the local party to win state-wide elections.

So what happens to a state when there’s no opposition party?

One sobering answer: not nearly as much as most voters would hope. For many Democrats, especially liberals, the dominance of Hawai‘i’s Democrats might seem like a cause for celebration—things could get done. And, yes, the Aloha State has an enviable progressive record on many policy issues. It became the first state to legalize abortion in 1970. Just four years later, it adopted an innovative health care law that requires most employers to provide health insurance.

But in recent years, the lack of vigorous, two-party competition has led to a culture of complacency among politicians and apathy among voters. Hawai‘i once had some of the highest voter turnout rates in the nation, but today the Aloha State consistently ranks dead last among the 50 states. In the 2016 presidential election, only 43 percent of eligible voters cast a ballot—a rate that was seven percentage points lower than West Virginia, the 49th-worst state.

As voters have disengaged, they have also become critical and distrustful of state government. One poll taken before the primary election this summer by the University of Hawai‘i’s Public Policy Center, which I direct, gave the Hawai‘i State Legislature a 21 percent approval rating. What is more troubling, only 30 percent of respondents thought they could trust Hawai‘i’s state government to do what is in the public’s interest most of the time.

Hawai‘i once had some of the highest voter turnout rates in the nation, but today the Aloha State consistently ranks dead last among the 50 states.

Part of the problem is that voters are rarely presented with a choice between different policy agendas or governing philosophies—even in major statewide races. In the most recent gubernatorial primary, the two candidates, incumbent Gov. David Ige and U.S. Representative Colleen Hanabusa, spent much of the election bickering over small policy differences and forwarding vague arguments about their superior leadership abilities. The lack of public debate often becomes even more acute during the general election. Indeed, Democrats are so confident they will win in November that Governor Ige, who won the primary, has agreed to only two televised debates with his Republican challenger.

With the decline of the Republican Party, the two-party system has been replaced by Hawai‘i’s unique brand of factionalized politics. Unlike political parties, these factions are held together through personal relationships and the legislative favors doled out by powerful committee chairs, rather than shared ideology or policy preferences. Today, the state legislature is run by shifting coalitions of Democrats that go by obscure names like the “Chess Club,” for legislators who consider themselves policy wonks, or the “Opihi”—the Hawaiian word for local saltwater limpets that cling to rocks, thus designating how faction members stick together, no matter the issue.

This has led to a political process that is almost entirely opaque. Without an opposition party to force public debate, even seasoned political observers struggle to understand why some bills are passed and others fail. The problem is compounded by the legislature’s frequent use of tactics such as “gut and replace,” where bills that have moved through the review process are stripped of their original language and replaced with entirely different bills at the last moment.

Finally, the dominance of a single party means that many urgent public policy challenges remain unaddressed. Although incumbents are solicitous about the welfare of reliable Democratic voters such as the members of public-sector unions, they pay scant attention to the problems faced by increasingly disaffected young voters and working families. Unlike many other left-leaning states, Hawai‘i still has no publicly-funded pre-kindergarten education or paid family leave for working families. Its general excise tax is very regressive because it indiscriminately affects all consumers, placing one of the highest tafx burdens on low-income families in the nation.

How to bring back the light of transparency and the pressure of competition to Hawai‘i politics? There are no easy solutions, but publicly funded elections and institutional reforms like California’s “top-two” primary or European-style multi-member legislative districts might provide opportunities for more people to get involved and for more voices to be heard.

Regardless of one’s political affiliation, Hawai‘i’s experience suggests how detrimental one-party rule can be for voter engagement and policy responsiveness. No democracy can remain healthy for long without a loyal opposition.