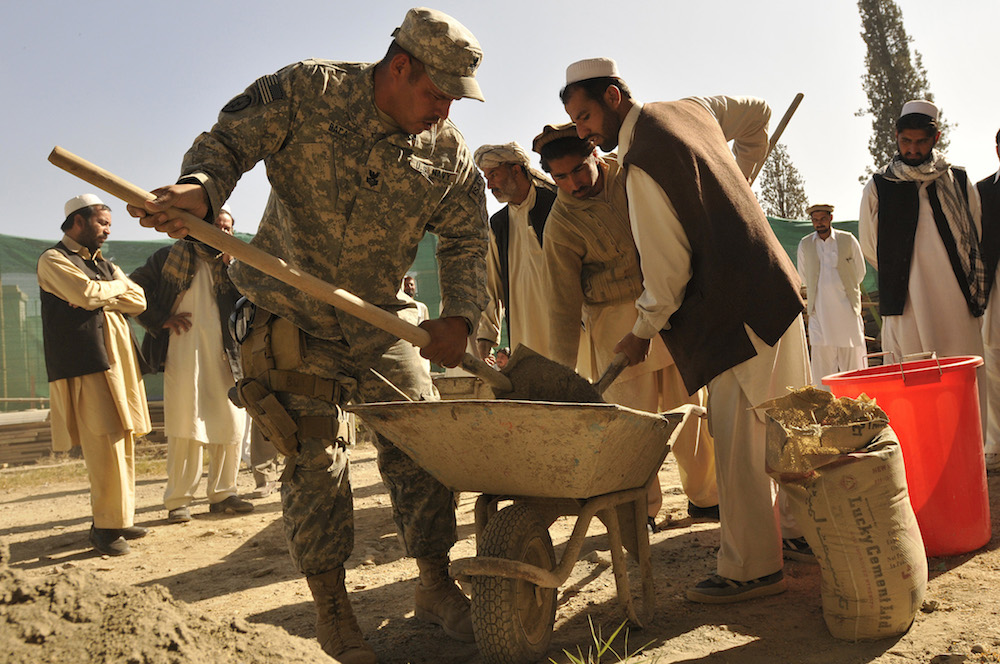 First it was sacks of rice. Then frozen chicken. Later, even a television. The goods were wrapped tightly in plastic bags and thrown in with the other trash in a truck. “It was simple,” Raj, a former employee, told me. “They were buying supplies and then just throwing them out.” Outside the American base in Afghanistan where Raj worked, the bags were offloaded in the market and sold to local Afghans. A piece of the profit went to the head of the kitchen staff, who organized the operation.

While we sipped coffee at a roadside cafe in southern India, about 1,500 miles from the private military compound that supplied fuel to U.S. bases in Southern Afghanistan, Raj explained how his boss made it clear that the missing items were to be labeled “lost” or “stolen,” in order to keep the books balanced.

For six years, Raj was one of over 100,000 non-American contract employees working for the Department of Defense in Afghanistan. For most of this conflict there have been more contractors working on U.S. contracts than there have been U.S. military personnel in the country. Through no fault of their own, the shift from American soldiers to contractors like Raj has made the war more expensive, less democratic, and more dangerous.

Contractors come from countries including Bosnia, Bangladesh, India, Turkey, the Philippines, and Nepal, to name a few—and do much of the day-to-day work of the war. But unlike soldiers deployed to these war zones, they have fewer rights and fewer protections. Most can be fired at a moment’s notice. If injured, some receive compensation, but others I interviewed did not. Many had borrowed significant amounts from brokers to get their initial contracts, meaning they lived in fear of termination. With constant anxiety over deportation, such an environment is ideal for both corruption and rights abuses.

In Raj’s case, being a vulnerable low-level administrator gave him a perfect view of the corruption and mismanagement of the war in Afghanistan, but no ability to do anything about it. As a manager, he oversaw the work of the mostly South Asian laborers on the base and could watch various scams in progress. He knew that his American and European bosses did little to hide these operations, since they did not fear being reported by those below them. By contrast, if Raj complained, he could be fired and sent out of the country on the next flight.

Like many of his colleagues in low-level management, he was from Kerala and had struggled to find work in India. “There are no jobs here,” he said. So he stayed quiet. So did thousands of other contractors who felt they had no other means to support their families, inadvertently becoming a part of a corrupt war economy.

Raj’s story explains some of the corruption and high cost of the war in Afghanistan, but it also helps explain why U.S. voters have lost interest in America’s ongoing wars. With the bulk of the work being done by contractors rather than their children and neighbors, Americans have stopped watching the war. In the process, they’ve given up much of the democratic oversight that is meant to help shape American foreign policy.

Part of the lack of opposition to ongoing U.S. wars is that Americans have become less involved in both policymaking and policy implementation. Without conscription, participation in war is perceived as voluntary. And while numbers of American dead in wars formerly affected public opinion about continuing to fight those wars, with fewer deaths of American soldiers, the public has become disengaged—and so have its elected representatives.

U.S. voters have long been more interested in domestic issues than in international affairs, but the organization of America’s recent wars has made civilian oversight more and more difficult. The shift to contracting means that military strategies are less likely to be discussed in public forums and more likely to be simply embedded in contracting or budget agreements out of the public eye. When things go wrong on a contract, companies have significant incentives to cover up their shortcomings, while lower-ranking workers like Raj are pressured to remain silent. Further, as the work has shifted to international contractors, the result is that wars are increasingly shaped not by generals and soldiers, but by companies and the businessmen who run them and who are primarily driven by profit.

In part, these wars also remain out of the news because of a deliberate strategy by the U.S. military to limit access to information about the war. The majority of international reporters in Iraq and Afghanistan embed with U.S. troops and report primarily through the lens of the experience of an American soldier. They do not visit bases like the one that Raj worked on.

Little reporting is done on contract workers. In fact, the total number of these workers is impossible to track because some U.S. government agencies outside the Department of Defense—including USAID—didn’t even record the number of contract workers they were employing until recently. Other agencies still don’t.

While many of the popular narratives about private contractors suggest that this work is not as dangerous as soldiering, it is not clear if this is true. Department of Labor statistics suggest that almost 4,000 contractors have been killed while working to support the wars in Afghanistan and Iraq, and this number includes only those working directly for the Department of Defense. More importantly, contractors have self-reported these numbers to the U.S. government, so the real number of those killed is no doubt higher.

Contractors also face dangers through exploitation that soldiers may avoid. One of Raj’s colleagues, for example, explained to me how his boss instructed him to climb into an empty fuel truck to inspect a rocket that had been fired at it, even though he was not hired to do security work. Other employees I interviewed described being trafficked to Afghanistan, having their passports confiscated and being forced to work long hours for less pay than they had initially been promised.

Contracting in conflict zones is organized by nationality. At Raj’s base, the security guards were Nepali, the engineers were Turkish, and the cooks and cleaners were Filipino. Generally, it is those from the poorest countries who face the most danger and get paid the least. The outer guards at the U.S. embassy in Kabul, like at many international bases and installations, are all Afghan, while the next layer is Nepali, and only far inside do you encounter American or European contractors.

This economic angle brings up another undiscussed aspect of outsourcing wars: For the majority of the international contracts actually involved, the war is not about service or patriotism, as with soldiers. It is about a paycheck. And a paycheck that their extended family might be relying on to repay high interest rate loans to brokers that trafficked them to the war zone. Contractors find themselves in compromised situations, with complex loyalties, which may affect the conduct of the war itself. Raj was doing nothing to actively try to extend the war in Afghanistan, yet it was also clear that he did not want it to end—because that would mean termination. The majority of those that the U.S. is employing to fight its wars have a vested interest in seeing those wars continue despite their dangers.

While Raj returned home fine, other colleagues were not so lucky. More than one I spoke with had been kidnapped—a difficult situation for someone from a country like Nepal, which had no diplomatic presence in the country. In cases like these, workers become pawns that brokers trade and companies use or simply discard. Another Nepali I interviewed spent three years in an Afghan prison after sitting through a trial he could not understand, with the Nepali government only learning of his fate much later through a reporter.

The economic costs of the wars in Afghanistan and Iraq are staggering and should not be dismissed. According to the Costs of War project at Brown University, when taking into account debt incurred and long term costs, like benefits to veterans, America’s post-9/11 wars will cost the U.S. $5.6 trillion dollars.

But critiques of the war done by the Special Inspector General for Afghanistan Reconstruction and other overseers focus almost exclusively on financial audits and mismanagement of funds. Unfortunately, less work has been done on how contracting has made the management of the war itself even more difficult to monitor. Few are interested in the corruption happening on small contracting bases, and fewer still are tracking human rights abuses that occur as workers make their way toward these war zones.

With the drawdown of troops from Afghanistan, some might hope that democratic control over U.S. foreign policy will improve, but exactly the opposite is happening. While the number of contractors the U.S. is employing in Afghanistan has decreased, it has not decreased as quickly as the number of troops. This means that while in 2011 there were approximately 1.5 contractors for every U.S. soldier in Afghanistan, there are now three contractors for every soldier, making contractors increasingly the face of the U.S. presence. Furthermore, as the war wanes, contractors like Raj are looking for work elsewhere: Syria, Yemen, Russia and the Central African Republic. Some of Raj’s coworkers are now providing security for oil-rich countries in the Gulf, like the United Arab Emirates and Saudi Arabia.

This suggests that we are not far from a world where wars between rich nations could be fought entirely by contractors. Already, proposals to privatize the war in Afghanistan, allegedly to save tax dollars have gained political traction in Washington. But really, as Raj knows, such strategies will further move war away from transparency and democratic oversight and into the shadowy world of corruption.