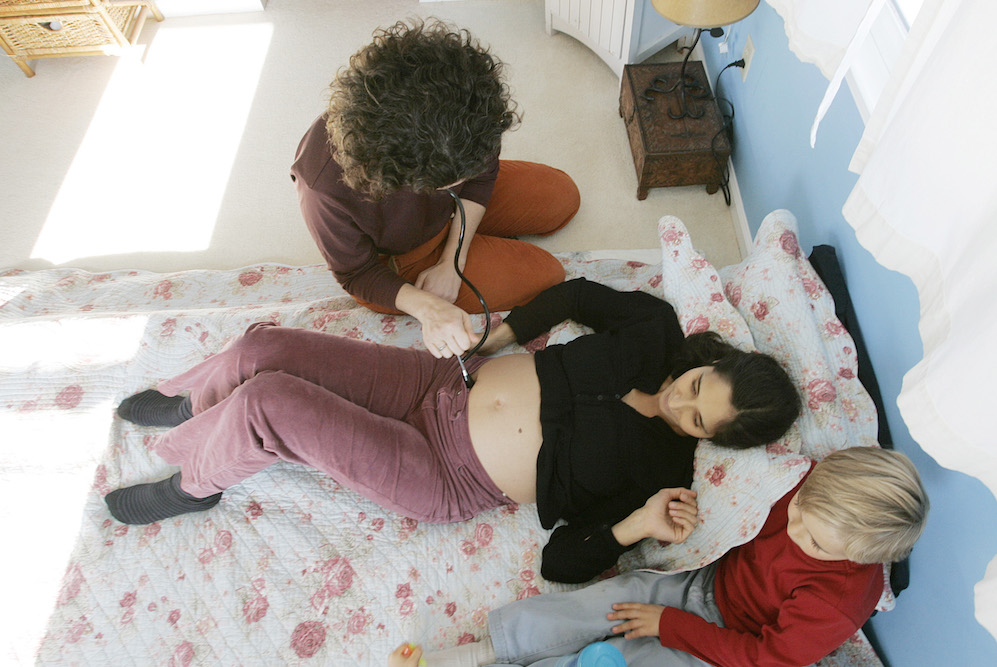 Almost one in three births in the United States today is by cesarean section—a dramatic change from a century ago when physicians avoided the surgery whenever possible. Doctors remained so wary of the surgery’s effects that even in the early 1970s, fewer than one in 20 births was by cesarean section. By 1987, though, cesareans accounted for one in four births in the United States. Since then, the frequency of the surgery has surged worldwide. A recent issue of the medical journal The Lancet condemned this “global epidemic” of unnecessary cesareans.

How did this major abdominal surgery—which poses significant risks—become mainstream in less than a generation? Many factors, including new obstetric technology, the effect of that technology on malpractice threats and costs, and changes in the way doctors are trained converged to make cesareans seem less risky than vaginal births, changing both obstetricians’ and pregnant women’s notions of what constitutes “normal” and “necessary” medical treatment during childbirth.

To see how quickly pregnant women’s attitudes toward childbirth changed, consider two contrasting stories about a woman’s reaction to her cesarean birth—one in 1971 and the other in 1984. Both women were first-time mothers. Both enjoyed problem-free pregnancies. And both were carrying full-term babies, facing head down, when they gave birth. In other words, they each experienced classically low-risk pregnancies—even though both women had a cesarean.

In 1971, the first woman—let’s call her Carol—checked into a big-city hospital at 2 a.m., shortly after going into labor spontaneously. Although only 20, she was not nervous. Her mother had given birth to nine children vaginally and Carol assumed that her own first birth would be a similarly “natural thing.”

In the labor room, someone came in periodically to check the baby’s heart rate with a fetal stethoscope. By dawn, Carol remembered, “they were having a little more trouble finding his heartbeat.” Nurses and doctors began to complain that Carol’s cervix was only two centimeters dilated. At 10 a.m., doctors decided to perform a cesarean, although they didn’t tell Carol their plan. Rather, they informed her husband, who was consigned to the waiting room—the custom in the early 1970s. Carol did sign a consent form to allow the surgery, but no one explained to her what she was signing and she didn’t ask. She was in labor and in no mood to question anything.

Consequently, when an orderly wheeled Carol into the operating room, she was bewildered despite having just consented to the surgery. “I’m going, like, ‘What’s happening?’” A doctor responded cryptically, “We’re going to operate.” Carol was flabbergasted. “Why?” Everyone ignored her. “It was like I was a non-entity.”

Only after her son’s birth did Carol learn the reason for the surgery. Facing difficulty finding a steady heartbeat, doctors feared fetal distress. But the explanation did not satisfy Carol. Her son’s Apgar score, a numerical rating of a newborn’s condition formulated one minute after birth by assessing five vital signs including heart rate and skin tone, had been first-rate. “There was nothing distressed about this baby! When they pulled him out there was nothing distressed!” Today, she remains certain the cesarean was unnecessary. “I really felt that it was clinic day. The doctors were going to make sure that they didn’t have to come in later.”

Fast forward 13 years. By 1984, when Leanne gave birth to her first child, the surgery had become common, constituting 22 percent of births in the U.S. Unlike in 1971, when Carol had her first baby, by the mid-1980s everyone knew someone who had had the surgery.

Leanne was two weeks past her due date when her obstetrician told her she had to come to the hospital. He ruptured her amniotic sac, hoping to jumpstart labor. By then, the electronic fetal monitor, a device that provides continuous information about the fetal heart rate, had replaced doctors’ intermittent use of the fetal stethoscope. Nurses connected Leanne to the monitor. Her baby’s heart rate began to fluctuate, probably in reaction to the drain of amniotic fluid. The obstetrician told Leanne, “We’ve got to get this baby out of here.” Leanne reacted unhesitatingly. “Just do what you need to do.”

After the birth, she harbored no regrets. She was certain that the surgery had been necessary given what seemed to be the potential risks to her child as indicated by the fetal monitor. “We got him out. We got him healthy. We didn’t lose me. We didn’t lose him. Everything was fine.” Leanne, unlike Carol, was sure her cesarean had been necessary. By the mid-1980s, due to the increasing number of cesareans, the notion that vaginal childbirth was risky had become common. Leanne’s favorable reaction to cesarean surgery had become the norm, Carol’s anger the aberration.

Cesareans can indeed be lifesaving. But the grave conditions that demand the surgery are rare—each occurs in fewer than one percent of births. These conditions include the umbilical cord dropping into the birth canal before the baby does, several different placental complications that include premature detachment and obstruction of the cervical opening, and a full-term fetus lying sideways in the uterus. Yet the electronic fetal monitor helped cement the view that vaginal birth is far riskier than it actually is.

In hindsight, it is clear that physicians and hospitals adopted the monitor too quickly. The monitor had been introduced in 1969 but the first clinical trial of the device was not published until 1976. By then, all but one of the hospitals housing obstetric residency programs in the U.S. had adopted the machine, making its use central to the training of new obstetricians.

The authors of the 1976 article that appeared in the American Journal of Obstetrics and Gynecology found that the monitor—although considered by most obstetricians to be a vital tool—did not change outcomes. Apgar scores; stillbirths; neonatal and perinatal deaths; incidence of cerebral palsy; and admissions to the neonatal intensive care unit were effectively identical whether the fetal heartbeat had been tracked constantly by the electronic monitor or intermittently by a nurse or doctor wielding a fetal stethoscope.

The only difference between the two groups was that the mothers connected to monitors had a cesarean rate of 16.5 percent while those checked intermittently with a fetal stethoscope had a cesarean rate of 6.5 percent. Seven subsequent studies, one of 35,000 births, confirmed these findings. But having been taught that the electronic fetal monitor was vital to their own professional success, as well as their patients’ well-being, obstetricians ignored the studies.

This dramatic change in obstetric practice has not been good for mothers.

Edward Hon, the Yale University obstetrician who invented the monitor, complained of his colleagues around the country, “They’re dropping the knife with each drop in the fetal heart rate.” Before electronic monitoring, continual observation of the fetal heartbeat was impossible, so no one knew precisely how the fetus responded to the many nuances of labor. “As we started seeing these dips and things all over,” another obstetrician observed of the monitor strip, “it helped increase the section rate a lot.”

The monitor also helped to create the current malpractice climate in obstetrics. Since the mid-1980s, the continual record produced by fetal monitors has become a tool of trial lawyers to “prove” to juries that a timely cesarean would have prevented cerebral palsy, even though the cerebral palsy rate, at one in 500 births, has not decreased even slightly with the advent of the monitor. As one seasoned obstetrician explained, a lawyer can now point to a squiggle on a page and claim, “‘Well, that’s where the baby was damaged.’ How do you disprove that?”

The litigious atmosphere in obstetrics, aided in no small part by the unreliable but tangible data produced by the fetal monitor, has prompted an ever-increasing number of obstetricians to perform a cesarean in the face of even niggling doubt about the course of a birth. In the legal and medical worlds, no matter the outcome of the operation, an obstetrician who has performed the surgery is considered “covered.” And that has increased the cesarean rate further still.

Through the 1980s and ’90s, the surgery became the first resort for younger obstetricians treating virtually any complication of labor. As one obstetric resident at a large, urban hospital said recently of herself and her cohorts, cesarean section is “probably the skill that we get the most experience in.” She joked, “We could do a C-section on a desert island.” Significantly higher reimbursement rates for cesareans versus vaginal births add to the tangle of factors contributing to the rise in cesareans.

Forty years ago, Helen Marieskind, the author of a 1979 U.S. Department of Health, Education, and Welfare report on the increase in cesareans and ways to mitigate it, noted, “The question must be raised as to how much a climate accepting of C-sections in and of itself promotes more Cesareans.” Marieskind’s “question” was clearly prophetic. Carol’s and Leanne’s contrasting stories indicate how quickly mothers came to accept cesarean surgery. The claim of the obstetric resident that she could perform a cesarean on a desert island demonstrates how casually physicians now view this major abdominal surgery.

And yet this dramatic change in obstetric practice has not been good for mothers. Cesareans carry risks, including intractable postpartum infections, that vaginal births seldom do. One of the most frightening downstream effects of a cesarean is placenta accreta, when the placenta grows into the uterine scar left by a previous cesarean. The condition, which causes life-threatening hemorrhage, has increased 55-fold since the 1950s. Accretas almost always require emergency hysterectomies; seven percent prove fatal.

Undoing the medical ethos that led to the epidemic of cesareans will likely take time and will require concerted effort from, and the education of, a number of players: obstetricians; hospitals, particularly hospitals with obstetric residency programs; insurers; and patients. But it can be done.

History demonstrates that changes in society and medical culture, rather than medical need, prompted the surge in the cesarean rate. There is a lesson here. As new treatments and diagnostic tools become available, no matter the field of medicine, it’s important to remember that medicine is not a dispassionate science, but an art continually shaped by changes in culture and society.