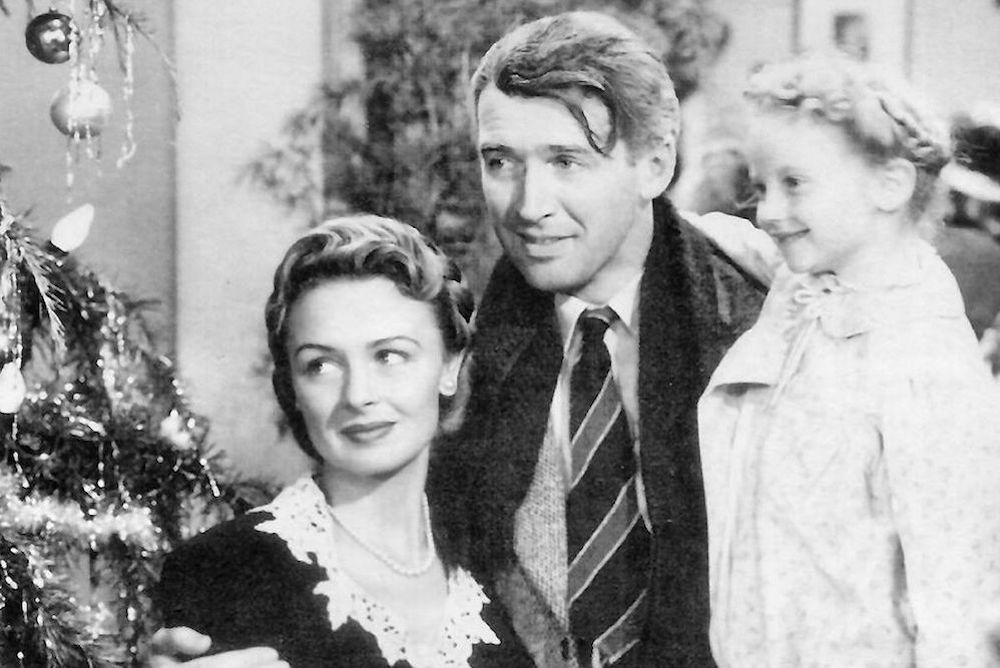 George Bailey tries to kill himself and make it look like an accident, so that his wife, Mary (played by Donna Reed) can get $8,000 in life insurance to save the family business. The failure of this suicide plot makes for an improbably heart-warming classic film.

Isn’t it a little odd that our most cherished Christmas film is about a man seeking to end his life by jumping off a bridge? Frank Capra’s It’s a Wonderful Life is full of traditional holiday themes like romance, friendship, and family. It’s unabashedly sentimental too—“Capra-corn” in its purest form. But it’s also a film about suicide—its causes, costs, and consequences.

The movie’s dramatic arc is built around 40-year-old George Bailey’s attempt to kill himself. The film opens with prayers offered up to heaven by townsfolk worried that George, who has gone missing on Christmas Eve 1945, is about to do something dangerous. “Please God,” his daughter Janie prays, “Something’s the matter with Daddy.” Somewhere up in the heavens, two senior angels hear those prayers and dispatch one of their apprentices, 200-year-old Clarence, to answer them.

George, Clarence learns, has convinced himself that he’s “worth more dead than alive” and is “thinking seriously of throwing away God’s greatest gift.” He is headed to a bridge above the canal in Bedford Falls with the intent to jump to his death so that Mary Bailey, his wife, can claim his life insurance and secure the $8,000 needed to save the family business, the Bailey Bros. Building and Loan.

Bound up in this convoluted plot is a short lesson about the way suicide functions as a religious provocation, and as an event with distinct legal and economic aftereffects.

Take George’s plan to defraud his insurance company. He is not the first person to try to make an intentional suicide look like an accident so that his beneficiaries can benefit. That sort of tragic scam actually has a long history. American insurance companies offered the first life insurance policies in the 1810s, and from the beginning they struggled to deter a range of moral hazards, including the perception that their policies offered perverse incentives to desperate people to commit suicide.

As Sharon Ann Murphy explains in Investing in Life: Insurance in Antebellum America, companies stipulated that they would not pay out in cases when a death could be shown to be premeditated. In 1823, the first life insurance policy ever issued by the Massachusetts Hospital Life Company said that “this Policy shall be void, null, and of no effect” if the insured “shall die by his own hand.”

Such terms quickly became standard and by 1945 every insurance policy said much the same. George Bailey is clearly wise to this because, rather than find a gun or a rope to achieve his purpose, he has decided to jump from a bridge in the dead of night in hopes that authorities will rule his drowning to have been accidental rather than intentional.

And he has good reason to think that they might.

In fact, verdicts of rational suicide (felo de se) are remarkably rare in American history. For decades prior to 1945, when suicide was suspected, coroner’s juries across the United States habitually handed down verdicts of accidental death or non-culpable insanity (non compos mentis). As I’ve found in my own research on suicide in 19th-century America, intentional suicide is notoriously difficult to prove in the absence of eyewitness testimony or a note attesting to the deceased’s state of mind.

Even today, standards of evidence for determining suicide still vary wildly from jurisdiction to jurisdiction. For a long time, coroners’ jurors had to weigh the impact of draconian laws which required authorities to bury the bodies of suicides in unconsecrated ground (or, in the case of colonial Massachusetts, by the sides of highways) and to confiscate the individual’s assets. Refusing to punish surviving family members who otherwise would have inherited those assets, many coroners’ jurors preferred to give the benefit of the doubt to those who seemed to have intended to die, a fact poor George Bailey was surely banking on.

Still, George’s plan to commit insurance fraud by disguising his suicide as an accidental death is full of holes. Had the Bedford Falls coroner conducted a postmortem, he would have found George’s life insurance policy is in his pocket, a sure sign of his deceptive intentions. George should have left it at home. If the policy itself were lost in the swirling waters into which he jumped, his widow Mary might have trouble making a claim on it. She might not know which company to approach. Even if she did, that company could refuse to honor the contract until the Baileys could produce the policy document.

Many coroners’ jurors preferred to give the benefit of the doubt to those who seemed to have intended to die, a fact poor George Bailey was surely banking on.

Of course, Capra never lets things get that far. Clarence plunges into the river first, faking his own accidental drowning. And by doing so, he snaps poor, good-hearted George out of his self-destructive stupor. George dives in after Clarence to rescue him and both men struggle to shore and then into blankets provided by a tollkeeper in whose hut they recuperate. In the film’s final act, Clarence shows George what Bedford Falls would have been like had he never been born, a dystopian alternative reality that finally convinces George to beg for his life back.

This is dark and serious stuff and surely a sign of the times. During the Great Depression, commentators had worried that more and more ruined heads of American households were committing suicide. The same moral panic seized the nation again in the wake of World War II, as home front heroes like George and returning soldiers like his brother Harry tried to process all that they’d experienced and readjust to the rhythms of life in peacetime. Underreporting of suicide in the surviving statistical evidence makes it impossible to know whether or not attempts at self-destruction actually spiked during either period. But the hand-wringing continued nevertheless and It’s a Wonderful Life, which premiered in 1946, does its civic duty as a piece of earnest anti-suicide messaging.

It’s also a vehicle for Capra’s Roman Catholic worldview. As Malcolm Scott explains in Frank Capra and the Cinema of Identity, the film opens with prayers and concludes with the affirmation that God and his angels in heaven love us and want to save us. The original title of the script, by Philip Van Doren Stern, was The Greatest Gift, and on the question of the right to die, the film touts its religious values loudly and proudly.

“It’s against the law to commit suicide around here,” the tollkeeper reminds George after his failed attempt to take his own life.

“Yeah, it’s against the law where I come from, too,” adds Clarence.

Beneath its melodramatic veneer, then, It’s a Wonderful Life is a remarkably rich cultural artifact of the postwar era. It’s a manual for how not to commit insurance fraud, a strikingly conservative treatise that denies the individual right to suicide, and a haunting, pointed study of doubt, loss of faith, and the degradation of dignity.