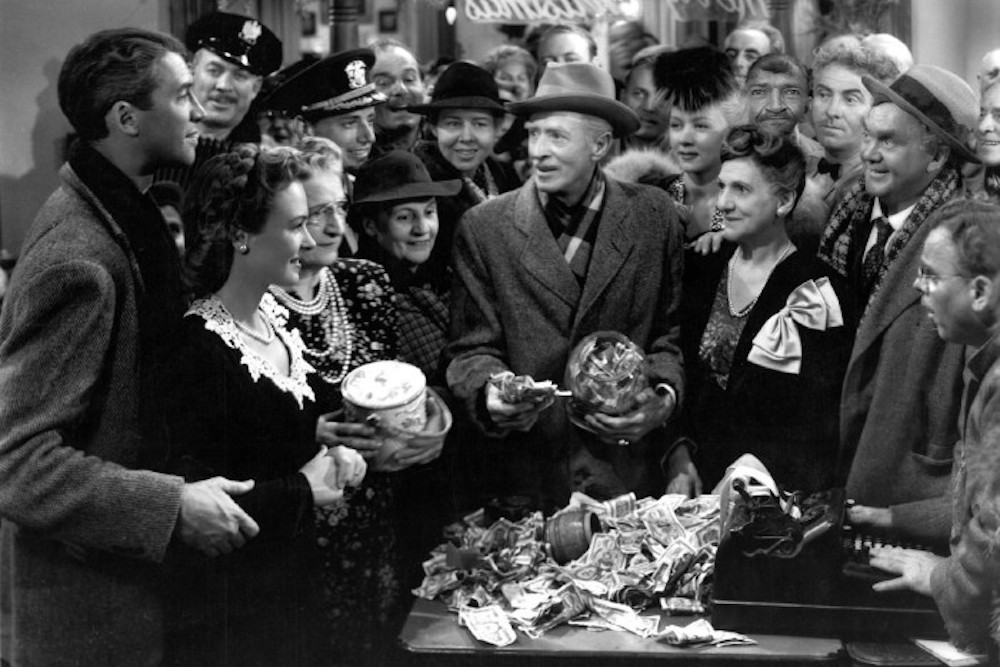 The townspeople of Bedford Falls rally around George Bailey, the honest proprietor of a Building & Loan company, in It’s a Wonderful Life. Courtesy of Wikimedia Commons.

From the Gilded Age and until well into the Great Depression, Americans engaged in one of the most consequential debates in the country’s history: how best to address the economic inequities and societal problems stemming from industrialization, and relatedly, wealth maximization in the private sector.

For some, a bureaucratic state was the answer. As was argued first by the Socialist Party of America in the early 20th century, the state could equalize wealth inequalities. Later, with the Depression, a great number of Americans came to believe that such a state could mitigate the social problems of the country’s volatile economic order.

A differing view came most prominently from steel-tycoon-turned-philanthropist Andrew Carnegie. At the turn of the century, Carnegie argued that industrialists such as himself, not state bureaucrats, were best suited for playing the intertwined roles of wealth redistributor and addressor of societal problems caused by industrialization. If the state provided for citizens’ basic needs, Carnegie feared workers would be disincentivized from improving their work ethic and striving. And he imagined that those who made the wealth would know best how to allocate it on behalf of the public. In an 1889 essay titled “The Gospel of Wealth,” Carnegie argued that philanthropy, rather than the state, was best suited to tame the problems originating from modern industrial life.

This national debate came to a head in the late 1920s and early 1930s, under President Herbert Hoover.

Within months of Hoover’s entering White House, the stock market crash of 1929 introduced Americans to what would become one of the most dire economic traumas in U.S. history. But at first, Hoover did not appreciate the magnitude of the economic crisis that would define his presidency. He focused instead on the country’s general social problems, including its modern economic life and the migration of many people from rural communities to urban settings. In addressing such problems, Hoover was rather sympathetic to Andrew Carnegie’s preference for mobilizing philanthropy.

Hoover invited Rockefeller Foundation President Max Mason to meet with him in Washington, D.C. The Rockefeller Foundation had recently taken over the funding of the social sciences from its auxiliary organization, the Laura Spelman Memorial Foundation. President Hoover wanted to see if the Foundation would be willing to fund a project larger in size and scope than anyone had conceived of previously.

Mason, in his diary of October 2, 1929, wrote that Hoover had told him that he had appointed a committee of five individuals from the Social Science Research Council (SSRC), the Russell Sage Foundation, the University of Chicago, and the University of North Carolina to report on a possible study of trends and problems in the social field. “He expected this committee to determine what problems could be successfully attacked and to propose means of attacking them.” As Hoover explained to Mason, the SSRC could organize and manage the holistic survey of national trends and the Foundation could fund it.

Another president might have asked the U.S. Congress to fund such a nationwide investigation, rather than approaching a private foundation such as the Rockefeller Foundation. But, throughout his presidency, Herbert Hoover would remain hesitant to call upon the state to address social ills. Hoover “stewed in anxieties about the dole and endlessly lashed the Congress and the country with lectures about preserving the nation’s moral fiber, not to mention the integrity of the federal budget, by avoiding direct federal payments for unemployment relief,” the historian David M. Kenney would write in Freedom from Fear.

The project that Hoover proposed was eventually released in 1933 as Recent Social Trends in the United States: Report of the President’s Research Committee on Social Trends. This two-volume manuscript would become the first comprehensive, policy-oriented study of a national problem utilizing U.S. social researchers across the country. The research committee for Recent Social Trends met for three years and surveyed social changes throughout the country. Sociologist Howard Odum, the assistant director of research on the project, would later write: “[a]t no time in the history of the United States…had there been attempted a comprehensive, well integrated, and coordinated campaign in which the social sciences jointly attacked the emerging social problems of the nation.”

In response to Hoover’s insistence on limiting the role of the state in taming modern economic life, the American public subsequently elected his antidote, Franklin D. Roosevelt. Roosevelt, who had endorsed pensions and government-sponsored unemployment insurance, would lead the expansion of the federal government in an effort to curb the national trauma of the Great Depression. His long tenure, from 1933 until his death in 1945, pushed the debate about how to redistribute wealth and recalibrate inequities decidedly in favor of a strong bureaucratic state.

George Bailey brings empathy to his market relationships as a banker; and in doing so, he sacrifices profits and individual opportunity in order to serve his community.

Arriving in theaters a year after President Roosevelt’s death, It’s a Wonderful Life did not echo the national sentiment at the time in favor of a strong state. But neither did it embrace Carnegie’s proposed social role for philanthropy. Rather, the movie provided a third option for taming the volatile and problematic nature of modern economic life: a charitable private sector.

It’s a Wonderful Life tells the life story of George Bailey, an uncelebrated local hero who begrudgingly assumes responsibility for his father’s building and loan company in a small town.

Following in his father’s footsteps (though betraying higher business acumen than his dad), George Bailey builds the building and loan into an institution capable of helping working-class community members build and buy their own decent homes and to provide for their own families. In practice, Bailey brings empathy to his market relationships as a banker; and in doing so, he sacrifices profits and individual opportunity in order to serve his community. In effect, the movie’s narrative arc underscores how Bailey plays a central role in making his town stronger, happier, and more stable economically.

It’s a Wonderful Life thus proposes that market relationships can take on the compassionate perspectives of their participants—and thus tame the negative consequences of modern economic life.

In 1946, this was a rather avant-garde proposition. At the time of its release, after all, many Americans imagined that a robust state, and to a lesser degree charitable giving, could be the key players capable of controlling the negative consequences of modern industrial life. Today, Americans still consider these to be the two main avenues for addressing modern economic inequities. And yet, Americans also have come to embrace a third option proposed by It’s a Wonderful Life. We see this option in Americans’ comfort with (and advocacy of) various forms of more empathetic market relationships from fair trade and impact investing to microlending and benefit corporations.

This is to say that a visible number of Americans today are trying to address the negative consequences of modern economic life by redefining their market relationships to be a bit more humane, empathetic, and driven less singularly by profit. And yet, compared to Bailey and his community in It’s a Wonderful Life, Americans are less certain that charitable relationships in the market will substantively transform economic life in the United States. Because unlike the fictional characters in this 1946 movie, Americans are rooted in actual American life.

And in actuality, Americans remain torn as to whether the market needs to be tamed, and if it does, what exactly could tame it. The answer might be Andrew Carnegie and Herbert Hoover’s vision for private giving. Or Franklin D. Roosevelt’s strong bureaucratic state. Or perhaps—as It’s a Wonderful Life and a growing number of contemporary Americans are suggesting—a more charitable private sector.