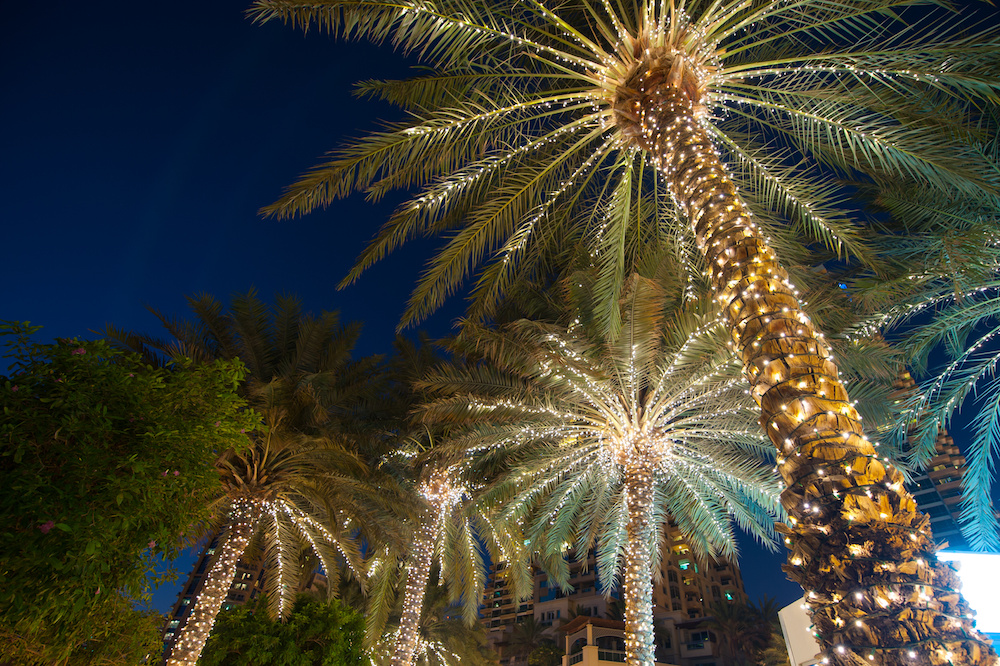 If you’re looking for the quintessential Christmas experience, there’s only one place you should go: the Southern California desert.

The Coachella Valley is the Golden State’s very own Yuletide capital—which might make it the capital of Christmas in America, maybe even the world. After all, California popularized Christmas via Hollywood, and still designs it through our toymakers, digitizes it via Silicon Valley, and distributes it through our ports.

Some Scrooges will call this sacrilege, citing our lack of conifers and snow. Leave such people to their ignorance—the desert is already plenty crowded this time of year.

What they don’t know is that Bing Crosby, the man who first and most famously sang “White Christmas,” was a regular in the desert. For a time, he broadcast his radio show from the American Legion Post in Palm Springs, and he even developed Blue Skies Village in Rancho Mirage, according to The Desert Sun. The other signature voices of the American holidays—from Elvis Presley to Frank Sinatra—also had deep desert ties. Frank Capra conceived his holiday classic It’s a Wonderful Life in La Quinta.

Christmas, of course, has been a desert holiday for 2,000 years, since a child was born in Bethlehem, a little town in the Judean desert still remembered for its failure to provide enough lodging. Palm Springs would never make the same mistake.

Christmas is about birth and journeys, and so is this time of year in Coachella. While the rest of the state slows down at the holidays, the desert starts up. Hundreds of thousands of vacationers make pilgrimages to the region, and various seniors and snowbirds arrive to take up residence for the winter months, swelling the Coachella Valley’s population from 200,000 to 800,000.

It’s worth noting that an estimated 450,000 of these winter visitors are Canadians, who know all too well the horrors of a cold and snowy Christmas.

And why wouldn’t you come to Palm Springs in December? The warm daytime weather is perfect for golf or swimming, while the cool nights make it possible for you to put on your Santa suit and celebrate the season without breaking a sweat. And if you must have snow, it’s usually there—on top of Mt. San Jacinto, which is only a hike or tram ride away.

The desert is simply the most transcendent environment in which to pass this season. “If you don’t die of thirst, there are blessings in the desert,” the great Northern California writer and novelist Anne Lamott once observed. “You can be pulled into limitlessness, which we all yearn for, or you can do the beauty of minutiae, the scrimshaw of tiny and precise. The sky is your ocean, and the crystal silence will uplift you like great gospel music, or Neil Young.”

Seeking such uplift on the first weekend of December, I drove from Los Angeles to Palm Springs, a trip that, at 100 miles, is about the same length as the journey Joseph and Mary made (in a caravan of migrants, some historians suggest) from Nazareth to Bethlehem.

Christmas, of course, has been a desert holiday for 2,000 years, since a child was born in Bethlehem, a little town in the Judean desert still remembered for its failure to provide enough lodging. Palm Springs would never make the same mistake.

During the holidays and the subsequent winter months, the Coachella Valley offers so many festivals—in music, architecture, art, film—that every weekend feels like Christmas. In December, it’s also home to huge light displays, none more awe-inspiring than Kenny Irwin Jr.’s Robolights, which draws so many people—60,000—that the city of Palm Springs is forcing it out of its current location in a residential neighborhood. Irwin is looking for a commercial space for next year.

But I most wanted to see what has quietly become one of the largest holiday parades in California: the Festival of Lights parade in Palm Springs.

It’s a relatively recent tradition—the parade started small in 1991. But it has grown, with city government and corporate support, into a bucket-list event that draws 100,000 people to a city with a population of 50,000, on the first Saturday night in December.

The parade runs for 1.3 miles along Palm Canyon Drive. This year, the crowds were 10 rows deep along the boulevard’s broad sidewalks. There were 84 entries—as many as in California’s biggest parade, the Tournament of Roses in my hometown of Pasadena.

All the participants and floats wear electric lights, including marching bands for middle and high schools, and vehicles from garbage trucks to fire engines to vintage golf carts. Neighborhood groups also inflate and carry giant helium balloons—like the ones in the Macy’s Thanksgiving Day parade in New York City—which are lit with spotlights mounted in trucks that ride just in front of them.

In these angry times, the warm and welcoming atmosphere distinguishes the event. While Pasadena merchants have long shut down their stores during the Rose Parade, Palm Springs merchants stay open during the Festival of Lights. Even real estate offices, spas, and law firms along Palm Canyon Drive hold open houses, with some offering food and drink. The parade also provides announcers at a couple different points to offer personal details about the participants (this included an introduction of a parade marshal’s “new lady friend”).

At this year’s parade, the cheers were especially loud for the Palm Springs Public Library Book Cart Drill Team, the Desert Burners Bicycle Brigade, and the Cathedral City High School Ballet Folklorico, whose members danced while wearing a combination of multicolored costumes and multicolored lights that gave new meaning to the word psychedelic.

The audience also appreciated the entry for a local hotel, a lit-up Hummer with a snow-making machine mounted on top, promoting the hotel’s “DRG Brunch Sundays,” a set-price brunch that includes cocktails and a drag show.

“We’re so lucky,” said Ethan Kaminsky, a local video production guy who held a massive potluck party next to an RV he had parked on a vacant lot along the parade route. “We get to live where everyone else comes for Christmas.”

Make yours merry, bright—and dry as the desert.