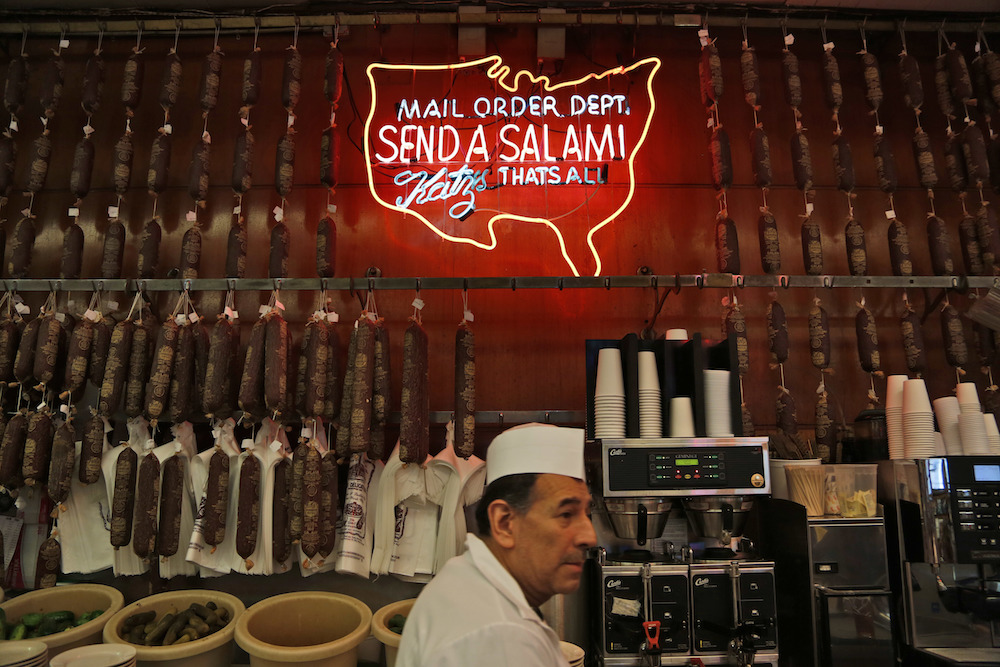 Since it opened in 1888, Katz's Delicatessen has been a staple of Manhattan's Lower East Side. The famed restaurant made a name for itself during World War II with the slogan “send a salami to your boy in the Army.” Photo by Seth Wenig/Associated Press.

While the Jewish heritage industry is booming in many places, it is struggling in New York.

This poses a problem not just for the city but also for those who want to create the broadest and most complete understanding of Jewish heritage.

As the cradle of the Jewish history in America, New York City, and especially the Lower East Side, represents that breadth. Advances in literature, comedy, café life, politics, and labor can all be traced to the Jewish experience here. The city’s popular culture—from Fiddler on the Roof to Woody Allen and Jerry Seinfeld—has mainstreamed a nostalgic version of “schmaltzy” New York culture as a wellspring of American culture.

In the mid-1970s, in the wake of the blockbuster TV series Roots, people rushed to participate in destination travel around the world in search of their heritage. Cities began looking to tourism, including heritage tourism, as an alternative economic engine for their deindustrializing urban economies.

The United States, which provides the greatest number of heritage tourists worldwide, shows how big this trend was. The U.S. State Department reported the number of passports issued grew from 7 to 113 million between 1989 and 2013, an extraordinary 16-fold increase in a quarter of a century.

But all these passports didn’t help New York. To the contrary, the passport surge showed that Jewish Americans were leaving the country in search of their heritage. And New York City lacked what many Jewish Americans wanted to visit: Holocaust sites.

This shift in sensibilities first drew attention at a 1999 conference in New York. The conference had been called to commemorate the quarter-century anniversary of Irving Howe’s Pulitzer Prize-winning history World of Our Fathers (1976), which chronicled the heyday of Yiddishkeit and Jewish socialism among the millions of Jewish immigrants who peopled the Lower East Side after 1880.

At the event, the critic Kenneth Walzer noted a troubling new consensus about the shifting terrain of Jewish heritage: “Yiddishkeit, socialism, and Jewish labor have been displaced by the new centrality of the Holocaust, Israel, and new forms of Jewish particularity.” The historian Peter Novak attributed this new focus to an increased Jewish self-conscious commitment to witness the Holocaust in the aftermath of the 1967 Six Day War.

Since then, other scholarship and my own travels around the world for a book on Jewish heritage and tourism have confirmed the truth that a nationalist redemptive Holocaust narrative has come to dominate Jewish heritage tourism. Cities such a Budapest, Berlin, Krakow and Warsaw are hot destinations that can sate Jewish appetites for Holocaust remembrance.

The irony is that New York’s Jewish history, while broad and varied, has heritage institutions that for all their strengths don’t match the moment.

Today, the City has three major Jewish museums, but its oldest, the Jewish Museum, is an art museum far removed from the Lower East Side. Founded in 1904, since 1947 it has been located in the former home of the banking titan Felix Warburg on the Upper East Side at 92nd Street and Fifth Avenue. While it displays its vast collection of fine art, Judaica, folk art, and ceremonial artifacts to depict Jewish culture and identity around the world, the Museum primarily focuses on Jewish artists, many of whom are New Yorkers of the contemporary era.

The two other major Jewish museums do address Jewish history more directly, though again, with special attention to the New York experience and limited attention to the long and worldwide story of Jewish heritage. Both emerged as part of the major growth of Jewish heritage at the end of the twentieth century. One, the Jewish History Center, opened in 2000 on 16th Street. It is home to five partner Jewish research institutions—the American Jewish Historical Society, the Yeshiva University Museum, the American Sephardi Federation, the Leo Baeck Institute, and the YIVO Institute for Jewish Research. But the Center is less a museum than a major site for historical research.

Each institution within the Center mounts small temporary exhibits. And these exhibit spaces, in a nod to demand, do tend to draw more upon the German and Polish historical archives of the institutions than on records for the history of Jews in New York. Exhibits hosted by the American Jewish Historical Society, often in conjunction with another Center institution like Yeshiva’s Museum, are the exception. They address themes in Jewish history and occasionally detail Jewish heritage in New York. But despite the high quality of the programming, the site is not a major stop on the heritage trail.

Neither is the Lower East Side Tenement Museum, located on Orchard Street. At first glance, it would seem to make the ideal center for Jewish heritage tourism. Founded by two Jewish women, Ruth Abram and Anita Jacobson, with strong senses of their own heritage, the Tenement Museum is however, by design, a museum dedicated to the story of American immigrants. A series of rooms have been outfitted to reflect how individual families of particular ethnic groups including the Irish, the Germans, Jews, and Italians lived in the tenement during different eras. The museum’s cause is not Jewish heritage per se, though the framework adds an illuminating comparative perspective.

Would a direct appeal to interest in the Holocaust work in New York? For tourists seeking sacred ground for a ritual of mourning and remembrance, the answer is a frustrating no. The Museum of Jewish Heritage, opened in 1997 and located in Battery Park, has a focus reflected in the first part of its title: “A Living Memorial to the Holocaust.” The museum’s core exhibit is principally dedicated to the story of the Shoah. But this museum has struggled to turn a profit and match the crowds that visit the uptown Jewish Museum and the Lower East Side’s Tenement Museum. Its 41,000 walk-up visitors per year are one-quarter the number who visit the Tenement Museum and the Jewish Museum.

As important as it is, the focus on concentration camps and memorial sites narrows Jewish identity to a devastating moment in time and space, ignoring the long, lived history of a vibrant Jewish culture.

Beyond the museums, the staple of Jewish heritage tourism in New York remains the walking tour. But such tours in the Lower East Side stick to the Tenement Museum’s broader focus on immigration. To be sure, Jewish themed tours exist. The Lower East Side Jewish Conservancy advertises a roster of nine different tours, but during the eight months between April and November 2016, they advertised public walking tours on just 11 days. In contrast, the Chassidic Discovery Center in Brooklyn offers daily—except on the Sabbath—bus and walking tours of its specific Jewish New York experience: the Chabad synagogue, a mikvah (ritual bath), a matzo factory, and a Torah scribe/repairs shop.

Joyce Gold, described by CNN as the “doyenne of walking tours in New York,” typically offers about 20 public walking tours each year, only one of which (offered each fall and spring) on Jewish Colonial Manhattan is Jewish. And so forth. In sum, Jewish tours are few, and the trend finds them increasingly folded into the kinds of edutainment tours about moguls, scamps, artists, and food lore that can win guides a favorable TripAdvisor review.

In the last decade, I took several tours with Big Onion Walking Tours, whose president Seth Kamil legitimately claims it to be “New York City’s premier walking-tour company.” The company leads over 2,000 tours a year for upwards of 40,000 customers, offering a “rotating roster of thirty history-based neighborhood tours.” A few include Jewish history sites, but only one, “Jewish Lower East Side,” has Jewish heritage as a focus. Most of Big Onion’s LES tours begin in Kleindeutschland, the one-time German immigrant area, and move on to Little Italy, Chinatown, and then northward to the Jewish rialto on Second Avenue.

Others reverse the order and begin at the northern end of the area near Astor Place. Both starts allowed guides to reference the earlier history of the Irish and German immigrants, with stops at the site of the notorious Five Points Irish slum visited by Dickens or the site of the Astor Place Riots of 1849. The Italian, German, Irish, Chinese and other immigrant sites are interspersed with old Jewish sites.

It was not always so. When Kamil began giving tours in 1990, clients wanted to learn about Yiddishkeit and the life of the Lower East Side; twenty years later, this history was eclipsed by interest in the Holocaust, about which the Lower East Side has little to say. Big Onion’s Jewish tour business has now been reduced to about 15 tours a year, 20 percent of what it had once been. As of 2013, the “Original” Big Onion Walking Tour, “Immigrant New York,” had once again become the bread-and-butter of Kamil’s business.

Kamil roots New York’s declining Jewish heritage tourism to the opening up of tourism in eastern and central Europe after 1989. As part of the rise of Holocaust tourism, third- and fourth-generation American Jews identify with the Holocaust, not the Lower East Side, as the core Jewish heritage experience. Increasing numbers want to “go back” to homelands in which grandparents and great-grandparents perished or from which they fled.

Remembrance though has become a religious experience and Holocaust tourism commodified, a ritual of atonement. As important as this is, the focus on concentration camps and memorial sites narrows Jewish identity to a devastating moment in time and space, ignoring the long, lived history of a vibrant Jewish culture.

“If the Germans had invaded Brooklyn and established a concentration camp there,” he quips, “I’d be making a fortune.”