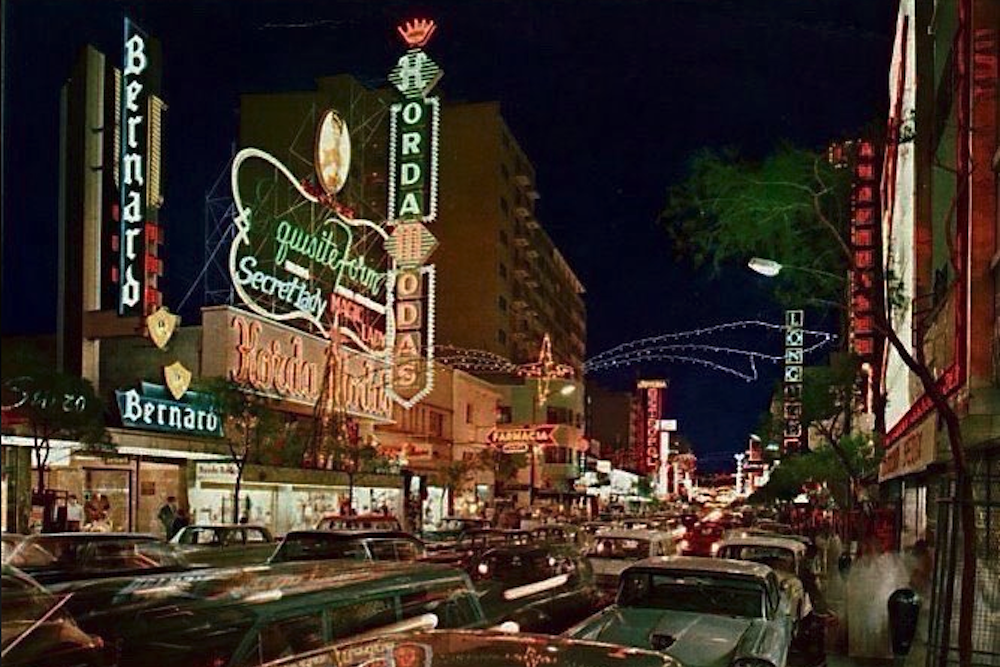 This nighttime photo of downtown Caracas in 1960 is one of thousands shared by Venezuelans on social media today. Courtesy of @GFdeVenezuela.

A few months ago, I made a stop in Miami on my way back to Venezuela. In the last decade or so South Florida, best known as the hub of Cubans in the U.S., has become one of the preferred destinations for over 3 million Venezuelans that have left our country.

A middle-aged Cuban man, the friend of a friend of a relative, picked me up from the airport and took me to Walmart to buy some basic goods to take home with me. Unsurprisingly, the topic of Venezuela’s current situation came up. He said he remembered back when Caracas was an important metropolis—he had visited it in the late ‘70s—and Miami was a small, backward town in comparison.

The man took out his phone to show me a video of a 1985 Christmas greeting from RCTV, the Venezuelan TV network that was closed down by government pressure in 2007. With all the glitz 1980s South American television could offer, the network’s stars—most of them unknown to me—paraded around cartoonish backdrops of folkloric Christmas vignettes surrounding a minimalistic manger while lip-syncing a Christmas-style song about how RCTV is part of your family.

Every now and then, they were interrupted by a lion, the network’s mascot, dancing.

As much as I tried to relate, that Venezuela was foreign to me. The video was made 6 years before I was born and I wouldn’t exactly call tacky Christmas messages a cornerstone of my national identity. I’ve spent two-thirds of my life under the Bolivarian Revolution initiated by Hugo Chávez, and I’ve long been outraged and shed tears about my country. But I also have learned to pick my battles and measure my frustrations. So it was bizarre to sit stoically and nod while this person I just had met cried and ranted for my own country, my fallen country, my kidnapped country, my corpse of a country, which I was preparing to return to while continuing to keep myself afloat.

Nostalgia is powerful. For migrants, refugees, and any group forced to abandon home, nostalgia is not only a way to connect to their roots, but also a tool for preserving part of their own identity. For Venezuelans, nostalgia manifests in a variety of forms with different, contradictory meanings. It can be a respite, an obsession, and a painful reminder of missed chances and losses. At its most extreme, nostalgia becomes the only reality people can face: The present is bleak, the future is uncertain, only the past is safe.

But nostalgia today is not the private experience it once was. This is particularly true in Venezuela, where a constant stream of videos and images shared from dozens of social media accounts focused on the country’s past is difficult to ignore. Many of these accounts are linked to institutions such as the prominent newspaper El Nacional or the Archivo de Fotografía Urbana. Others are focused solely on a medium like television or a place like Caracas.

Many of the most popular, such as GFdeVenezuela, lack any specific theme or time span beyond the sharer’s mood. Today it could be about Christian Dior opening shop in Caracas in 1953. Yesterday, it was Charles de Gaulle’s visit in 1964, or hotel architecture in 1930s Maracaibo, or the commercial hub of Sabana Grande in the early ‘80s.

These purveyors of images have formed a community of dedicated, anonymous individuals obsessively collecting and sharing material from all sorts of sources. A vast majority seem to come from public archives and publications, such as TIME, or from commercial stock. Exactly how accurate these images are is a matter of contention, particularly since many of them are now taken as fact, especially when they reaffirm popular opinions about better days gone by.

Spend enough time falling through this social media rabbit hole, and nostalgia becomes something soothing, an analgesic to a home you no longer recognize. This is understandable. In a way, it’s a logical counterweight to the ever-present reports of inflation, scarcity, violence, and government abuse.

Paradoxically, it’s also a source of pain to remember when our nation was not a bogeyman or a cautionary tale but a regular country with regular problems. It’s especially bitter to recall Venezuela at its best, as something of a beacon of progress, democracy, and stability in a continent beset by hunger, poverty, and military regimes.

But nostalgia is not really history; it’s more an evocation of the past, which may explain why it’s usually born from the most mundane, unsuspecting things, like eating hallacas at Christmas surrounded by family, a TV ad for a toilet cleaner, or old foreign newsreels showing a radiant Caracas that now looks so dim and dismal.

The YouTube comments on the Christmas video I watched in the Miami parking lot are proof of that. “This revolution ended our country. Even Christmases are sad,” said one. “We didn’t see the disaster that was coming,” said another. “How not to cry seeing this? My beautiful Venezuela! You will return! You will reborn!”

One of the most repeated sentences in the comments was: “We were happy and we didn’t know it.” Over the years this expression has become a motto of sorts for this bittersweet variant of nostalgia.

This broad, incoherent limbo where the quaint 1950s Caracas, still with its red-tiled roofs, coexists with the sprawling city filled with skyscrapers from the ‘80s. The opulence of the booming ‘70s merges with the austere ‘90s. All of these past, pre-Chávez Venezuelas are compressed into a simplified composite Venezuela that is both very intimate and easy to relate to.

And whose Venezuela is this? My grandparents’ generation still wants the country where they lived most of their lives; those of my parents’ age want the nation that could have been but wasn’t. My generation inherited a second-hand nostalgia—the evocation of a past that isn’t ours. The youngest, who have spent their entire lives under Chavismo, get conflicted feelings, a strange mix of pride and shame, but ultimately this past is mostly alien.

At its most extreme, nostalgia becomes the only reality people can face: The present is bleak, the future is uncertain, only the past is safe.

Ultimately, when a whole country spends so much time admiring these different images and moments from the past, the question of when we took the wrong turn arises. Was it in 1998? 1983? 1958? Nostalgia then can be an efficient tool not only to stir emotions, but also to create narratives, lead minds, and control people.

It’s interesting that one of the first sites to take advantage of Venezuelan nostalgia on social media was Venezuela Inmortal. At first glance, it appeared to be just another source for pictures and videos from the 1950s, particularly newsreels and publicity stills of large construction projects built under the right-wing dictatorship of Marcos Pérez Jiménez (1952-1958): Housing projects, highways, cable cars, and the Rockefeller Center-like Simón Bolívar Center.

But if one paid enough attention, you would notice videos of military parades and speeches of general Pérez Jiménez—a chubby, dull little man who was friends with Perón, Trujillo, and Franco. And next to those were comments portraying the democratic governments that came after as corrupt unpatriotic populists who caused Venezuela’s decline. Unsurprisingly, Venezuela Inmortal has connections with fringe far-right movements.

Another Pérez Jiménez admirer, at least in his early years in politics, was Hugo Chávez himself. He even invited him to his swearing-in in 1999. Perhaps, Chávez was simply capitalizing on a general disappointment in the bipartisan democracy that had been established in 1958 but came to be considered self-serving and out-of-touch by the early ‘90s.

Like Pérez Jiménez, Chávez saw Venezuela through the lens of nostalgia; for him, the rule of Simón Bolívar as a long-gone Heroic Age. So Chávez’s “Bolivarian Revolution” sought to reframe the century and a half between the country’s independence and Chávez’s tenure as one long dark age of exploitation and injustice—with very little difference between dictatorships and democracies.

In this understanding of history, Chávez was a redeeming figure, seeking to fulfill an updated version of Simón Bolívar’s dream. Complex and pragmatic historical figures and events were clearly divided between good or bad, while a couple of figures were rescued from the dustbin of history to fit the official narrative. Simply having a sense of history was to subscribe to one pole or another: The Chávez revisionist history, or all the histories that came before that.

Venezuelan historian Manuel Caballero, in his book Contra la abolición de la historia (Against the Abolishment of History), argues that the process of reducing history to a straight line between its original, founding myths and the current power figures robs history of its living, collective essence, in the service of creating new, inalterable legends.

Caballero points out that the Chávez movement was hardly alone in using a historical redemption to justify itself. Movements across the political spectrum, from far-left guerrillas to right-wing dictators like Pérez Jiménez, also employed the same narrative—a glorious past, the decadence and corruption that led to the present, and the need to restore that moment of glory, that golden age.

In this way nostalgia, and its simplification of the past, can be dangerous. Instead of being just a shared reminiscence, nostalgia becomes a rock upon which we can crash our feelings of frustration and discomfort with the seemingly unsolvable problems of the present. This surrender to nostalgia is all but a declaration of hopelessness about the future, as if to say that Venezuela, where over 27 million people still live, is only worth existing as a memory.

Now that I am back in Venezuela, my mind often goes back to that Cuban man showing me that nostalgic video in the Walmart parking lot. Of course, it wasn’t his nostalgia, and the truth is that it is not mine either.

I don’t know what’s going to happen in Venezuela in a year or even a week but I deeply hope my people will learn from the past instead of idealizing it. And I wish that, when the time comes, we help each other build a new, better country. One where we can focus our admiration and our hopes on the future, once again.