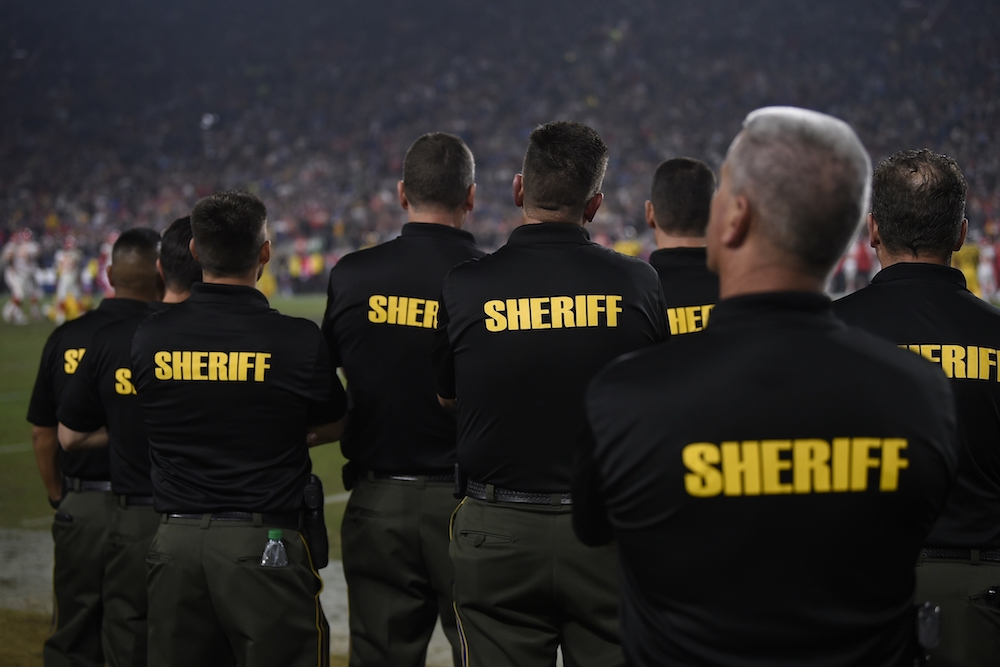 Sheriff’s deputies watch from the sidelines of an NFL football game in Los Angeles in November 2018. Photo by Kelvin Kuo/ Associated Press.

The county sheriff is the problem child among California elected officials. No office is less accountable, or more reliable in producing scandal.

Once elected, sheriffs in all 58 counties have power over jails and policing, and act pretty much as they please. When sheriffs do wrong, there is little that Californians can do to stop them. Under our state’s structure, a sheriff in California can’t really be fired. And those most liable to complain about a sheriff—inmates and those accused of crimes—have trouble gaining the public’s ear, let alone its sympathy.

You can see this absence of accountability in more than just the public swagger of so many sheriffs. In the Trump era, some sheriffs, especially in more conservative precincts, have flirted with anti-California treason, cozying up to the California-hating president by defying state laws designed to protect our immigrant families from federal abuses.

“The power of sheriffs,” historian Andrew Isenberg has written, “is inextricably tied up in the concept of a popular justice that is not bound by anything so mundane as the law.”

In theory, sheriffs should be accountable precisely because they are elected. Indeed, the California state constitution requires every county to have an elected sheriff for that reason. But in practice, sheriffs’ elections are not healthy contests. They draw little media attention compared to other races, so voters know little about the contenders or the issues. Sheriffs often run unopposed, since it’s a scary prospect to challenge an official who holds such virtually unchecked control over who goes to jail.

And when there are challengers, they typically come from among the sheriff’s own staff. This turns sheriffs’ elections into departmental civil wars, forcing deputies to choose sides and distracting departments from their ostensible job of protecting the public. In a typical example, last year’s nasty fight in Santa Clara County between Sheriff Laurie Smith and her former undersheriff John Hirokawa focused on which of these two bosses was more responsible for excessive force, racist texts, and sexual solicitations among their mutual underlings.

The job’s unaccountable nature is, like our two houses of Congress, a nasty artifact of America’s history as an English colony. Going back to the 9th century, English sheriffs apprehended criminals, but mostly used violence to collect taxes and extort bribes. That’s why we still celebrate Robin Hood and curse the sheriff of Nottingham.

That’s also why England turned the sheriff into a ceremonial position in the 1800s. But California, like other U.S. states, has preserved the problematic power of the sheriff. Last year, Governing magazine criticized the American sheriff as highly susceptible to corruption.

Californians know this all too well. The two most prominent sheriffs of this century—Lee Baca of L.A. County and Mike Carona of Orange County—are now both convicted felons (Baca for obstruction of justice in an investigation of inmate abuse, and Carona for witness tampering).

In both cases, state and local officials failed to police their corruption, so federal investigations were required to push them out of office.

The fact that the feds are often the only people who can stop such abuses is an unspoken reason why so many California sheriffs prioritize the immigration-related whims of federal authorities over fealty to state law. In this era, the sheriffs of Sacramento and Stanislaus Counties, facing constant questions about their behavior, have embraced President Trump’s false attacks on California’s sanctuary laws.

Sacramento’s Scott Jones has also been dogged by a constant problem for sheriffs: questions over whether contributions to his campaigns, both for sheriff and for Congress, have influenced his official actions. And like other California sheriffs, he has refused to submit to civilian oversight, even after questionable shootings and uses of forces by his deputies. When an inspector general with deep experience was appointed to look into a deputy-involved shooting, Jones locked him out of department facilities and refused him access to records and personnel.

The fact that the feds are often the only people who can stop such abuses is an unspoken reason why so many California sheriffs prioritize the immigration-related whims of federal authorities over fealty to state law.

In Stanislaus County, Adam Christianson, who has visited the White House to praise Trump’s irresponsible immigration policies, made headlines by falsely claiming that state law was responsible for the shooting death of a local police officer by an unauthorized immigrant. (In fact, ICE had never sought the immigrant’s deportation, and the state sanctuary law was not in effect when the migrant had previous arrests for DUI). The president and national media quickly parroted the sheriff’s claim, while ignoring Christianson’s awful record as sheriff—of millions paid out to settle lawsuits brought against the department, training problems that led to deaths, and accusations of treating all Latino inmates as gang members.

Mercifully, Christianson retired in January, but he was succeeded by one of two deputies who ran for the post. The winner, a Christianson ally, is pledged to uphold his policies. And Christianson, classy to the end, used social media to mock the loser, who had ties to the famous Milwaukee Sheriff David Clarke, who has suggested that one million Americans be shipped to the military prison in Guantanamo Bay, Cuba.

To be sure, excesses are not limited to politically conservative sheriffs. In the November 2018 elections, incumbent Sheriff Jim McDonnell, a distinguished LAPD commander who became sheriff after his predecessor’s conviction, lost in an upset to a little-known sheriff lieutenant, Alex Villanueva.

Democrats and liberal groups backed Villanueva to punish McDonnell, who had worked to soften the sanctuary state law. While Villanueva wisely promised to kick ICE out of the county jail, he won by also promising his fellow deputies to reverse McDonnell’s righteous efforts to fight corruption and install more outside oversight of the sheriff’s department.

In his first few weeks in office, Villanueva, who has no experience running a large organization, sowed chaos by removing 18 high-ranking officials from their posts and reevaluating the ranks of 500 other commanders. Some deputies say it’s no longer clear who is in charge.

When the media questioned these moves, Villanueva’s response was classic California sheriff: “The state constitution lays out that the oversight of the sheriff is the voters.” In other words, you’ll have to wait four years before you can do anything to me, no matter what I do.

There is another solution. Voters should change the state constitution—protecting ourselves by writing the elected sheriff out of it.