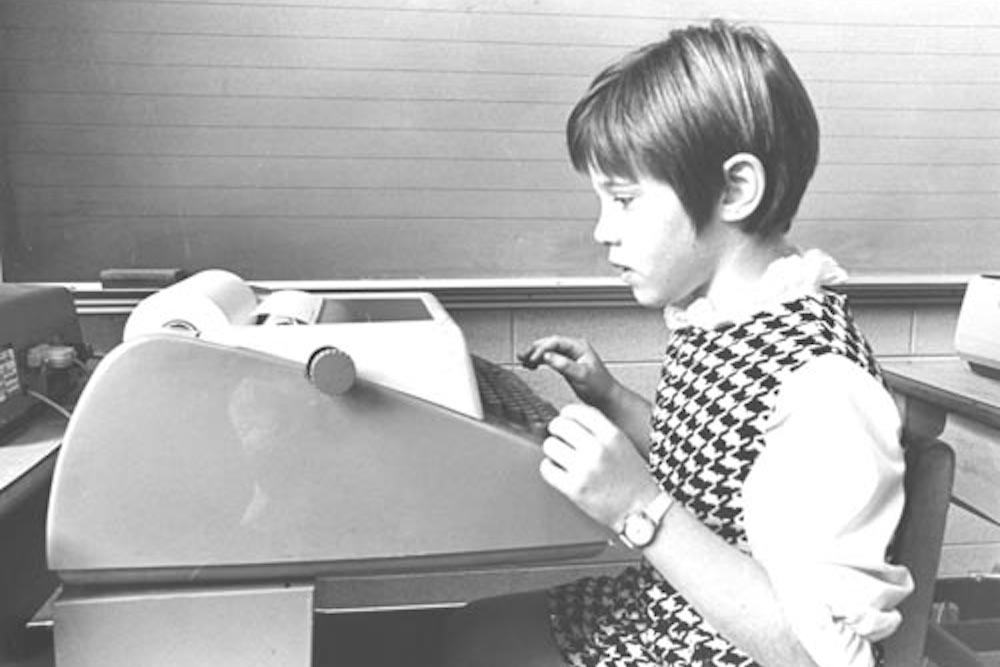 In 1971, three student-teachers in the Minneapolis public school system created the computer game The Oregon Trail for students in their American history class. In this game, players could imagine they were journeying from Missouri westward to the Pacific Ocean, in search of better lives. They had to manage supplies, battle illness and foul weather, and hunt for food to continue along the Trail. Working with rudimentary text-based computer interfaces, they typed “BANG” to hunt and answered questions—“Do you want to eat (1) poorly (2) moderately or (3) well?”—by keying in a number.

OREGON, as the program was known, became wildly popular with students across the United States during the 1980s. Today it is memorialized on t-shirts and in (paper) card games, hearkening to a pixelated time before the PlayStation and the Xbox. But it’s more than cute nostalgia for ‘80s buffs. OREGON is an artifact of an idealistic era in American computing before companies and commerce had taken over digital networks, enticing us to spend so much of our time and money online, tracking, storing, selling, and commodifying our personal data.

It was a time created in, and exemplified by, Minnesota.

During the 1960s and 1970s, Minnesotans created their version of a proto-internet that was centered on community, not commerce. This network wasn’t the domain of dot-com hipsters and billionaire venture capitalists on the make. Rather, it was led by civic-minded Midwesterners dedicated to shepherding public resources for the common good—people who realized that network access would someday be a necessity, and who worked to make it available to everyone, no strings attached.

Just as Minnesota farmers created a pioneering network of grassroots organizations that worked to increase family income and political power during the latter decades of the 19th century, Minnesotan teachers, engineers, and politicians united their state with computing networks starting in the 1960s, at a time when information technology was invisible to most Americans. Although computers proliferated in military, commercial, and university spaces—with several thousand in use by 1960—they functioned behind the scenes, processing checks for Bank of America, managing orders and inventories for Bethlehem Steel, and protecting against Russian airborne attacks.

The term “Silicon Valley” had yet to be coined, but in essence, Minnesota was the Silicon Valley of the Cold War. We forget this today, in part because Minnesota’s computing companies never sold to household consumers, instead providing gigantic, multimillion-dollar mainframe computers to the government, military and intelligence agencies, and other industries. During the 1960s and 1970s, Minnesota-based technology giants such as Control Data Corporation, Honeywell, UNIVAC, and IBM-Rochester anchored a robust high-tech economy in the Twin Cities. Honeywell alone accounted for 14,000 workers at its 21 plants, with an annual payroll of $70 million, historian Tom Misa has noted. Minneapolis-based General Mills, best known as a cereal company, also built “military electronics, torpedo directors, and bombsights during and after World War II,” and later made computers for NASA, the army, and the intelligence agencies. Hundreds of smaller businesses in the Twin Cities region also contributed parts, service, and expertise to the booming computer industry.

This enthusiasm for computing—and the recognition of its profound and growing importance to American life—permeated Minnesota’s schools. At University High School in Minneapolis, a group of teachers arranged for a teletype terminal to be installed during the 1965-66 school year. The teletype had a keyboard where users could communicate with a central computer, or with each other via the network. The terminal connected by long-distance telephone line to a computing network at Dartmouth College in Hanover, New Hampshire.

Suddenly, computing was a tactile, interactive experience for Minnesota students and teachers. They did not have to shuffle old-fashioned punch cards to create computer programs, handing the cards over to an operator who ran them through a remote, room-sized mainframe. Rather, students just sat down, typed in commands or requests, and got the solution to a problem or the latest news from another school seemingly instantaneously, displayed by the printer built into the teletype.

Working through professional associations, University High teachers urged colleagues at other area schools to put the “computer in the classroom,” too. Before long, they creatively employed a uniquely Minnesotan statute to make it happen. Enacted in 1943, the Joint Exercise of Powers law permitted cities, counties, or school systems to join together for specific purposes, attaining legal and budgetary status as a wholly new entity. This turned out to be perfectly suited for the proliferation of networked computing. A single school system couldn’t afford the then-tremendous expense of purchasing and maintaining (or even leasing) a mainframe computer; an IBM 360 model cost around $2 million in the mid-1960s—around $15 million in 2018 dollars. But several school systems could band together to cover costs, linking their teletypes to a jointly-owned (or leased) mainframe.

During the 1960s and 1970s, Minnesotans created their version of a proto-internet that was centered on community, not commerce. It was led by civic-minded Midwesterners dedicated to shepherding public resources for the common good.

In 1967, 18 school districts around Minneapolis-St. Paul did just that, using the state law to create the Minnesota School Districts Data Processing Joint Board to provide computing services for over 130,000 students. The joint board’s network was known as Total Information for Educational Systems, or TIES, and quickly expanded beyond the metro area. Participating schools used TIES for administration, education, recreation, and socializing, with over 26,000 students logging on to the system’s teletypes during the 1970-71 school year.

The TIES newsletter detailed the many ways students and teachers created new uses for the computers. In 1972, math teacher Linda Borry led a computer-composed music experiment; by 1974 students enthusiastically played a network version of the classic dice game Yahtzee, written at a TIES school. TIES’ structure enabled its phenomenal growth: If a student in one district wrote a program, they could save it to the TIES computing library, where it might be called up, used, and modified by another user in a different district.

The computer language called BASIC, short for Beginners All-purpose Symbolic Instruction Code, was key to the rapid growth of the network. BASIC had been created at Dartmouth as a user-friendly way for people to create computer programs. The language itself—and the programs created with it, eventually including OREGON—circulated freely around Dartmouth’s and Minnesota’s networks. Crucially, BASIC created a common language across computer networks. During the 1960s and 1970s, programs created for one brand of computer (say, an IBM) generally could not and would not run on another kind of computer (say, a Hewlett-Packard). But many computer manufacturers created their own versions of BASIC, and many of those versions were similar enough that a program or game written for one kind of computer could run on another with only minor changes. This allowed Minnesota students and their networked friends to eagerly play games such as OREGON, CIVIL (a Civil War simulator), and MANAG (competition in managing a business)—even outside of class.

By the early 1970s, several other networks serving students and educators had emerged around Minnesota, and administrators and legislators began to contemplate building a statewide TIES. Many were interested in managing the ballooning costs associated with multiple networks. But their vision was also propelled by a collaborative, user-focused ethos that paid special attention to the public good. State educational leaders believed that familiarity with digital technology would be essential in the future, and recognized that by the early 1970s, students in the Twin Cities region had far greater computing access than students across much of the rest of the state. They reasoned that teaching computing in public schools could provide a way to “insure a common experience for all children,” as TIES employee Donald Holznagel put it, giving all young Minnesotans an equal shot at digital citizenship. In the state where longtime senator and Minneapolis mayor Hubert Humphrey enacted the nation’s first municipal civil rights law in 1948 to provide equality in employment, it wasn’t a huge leap to strive for equal access to computing.

Starting in 1973, the Minnesota Educational Computing Consortium, or MECC, brought that vision of a statewide network for the public good to life, building on the networks that Minnesotans had already been cultivating for a decade. During the 1974-75 school year, the MECC network connected approximately 800 terminals around the state and served 84% of the state’s public school kids. In just two years, Minnesotans had tripled the number of students outside the Twin Cities area who had computer network access. Governor Wendell Anderson proclaimed October 19-25, 1975 to be “Computer Week.”

By bringing together Minnesota’s multiple networks and the software they had built, MECC fueled American computing’s journey on a path that, at least for a time, valued digital resources as a common good. For a while, it seemed like an ethos that might catch on. And OREGON seemed to prove their point. The game was a runaway success, not only in Minnesota, where students on a typical day during the 1977-78 school year enjoyed over 5,000 user sessions, but in public schools all around the U.S., where MECC became one of the earliest providers of educational software during the 1980s. As The Oregon Trail spread to school-age students around the nation; some started coding in BASIC, and others ventured onto nascent social networks such as Dartmouth’s “Conference XYZ” chatroom, or local dial-up bulletin board systems.

But kids in the other 49 states never had the kind of access Minnesota children enjoyed, and even today, over 30% of Americans, especially those in poor or rural areas, do not have broadband access at home. For Minnesotans of that first Oregon Trail generation, widespread civic support made computing comparable to water or to electricity—a public utility—built on the pillars of community, cooperation, and collaboration. Had other states followed Minnesota’s computing model, their students would have played The Oregon Trail as computing citizens, too, accessing public networks, creating programs, and sharing software—all as a public good. As it turned out, the rest of the nation has yet to catch up.