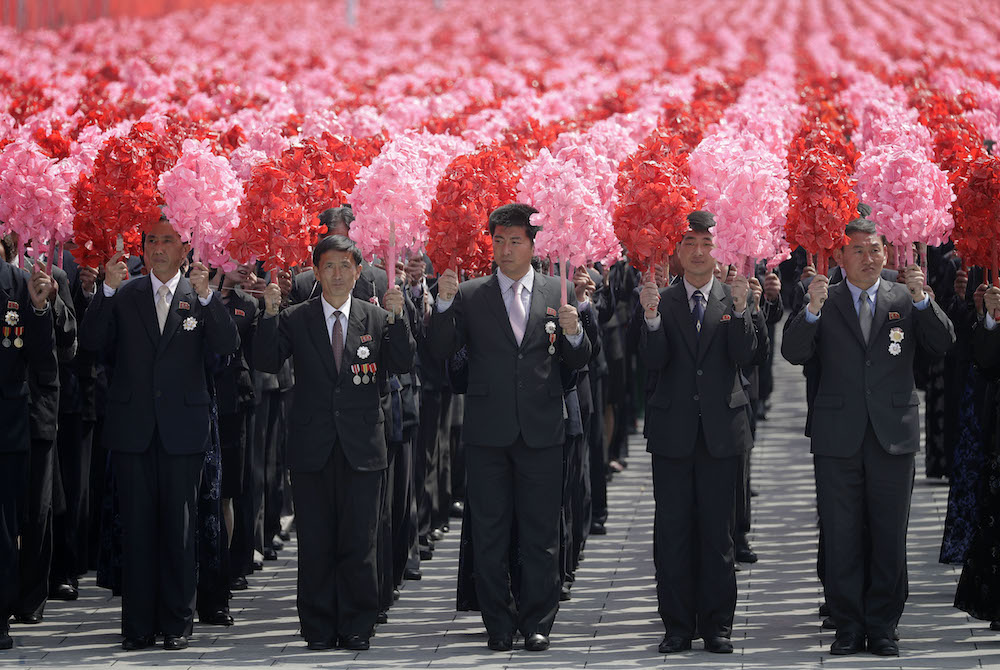 North Koreans wave plastic flowers during an April 2017 military parade in celebration of the birthday of Kim Il-sung, the grandfather of Kim Jong-un. Photo by Wong Maye-E/Associated Press.

The 1950-53 Korean War ended in an armistice rather than a peace treaty, and hopes have been raised that this week’s second U.S.-North Korea summit may begin a process towards formally resolving the conflict. Announcing the meeting, Donald Trump tweeted: “I look forward to seeing Chairman Kim & advancing the cause of peace!” and his special representative, Stephen Biegun, said Trump is “ready to end” the Korean War.

American leaders are not alone in using the word “peace” in the context of this meeting. North Korean leader Kim Jong-un has spoken of charting a “peace-oriented” historical trajectory on the Korean Peninsula. Perhaps the most vocal supporter for establishing a permanent peace is President Moon Jae-in of South Korea, whose “peace first” policy envisions inter-Korean reconciliation driving denuclearization.

On the surface these sentiments are admirable—who can argue against peace? But to be successful, diplomacy must be informed by the difficult history of negotiations with North Korea and the complex security landscape in Northeast Asia. Prematurely declaring “peace” could have unintended negative consequences for denuclearization, U.S. alliances, and existing institutions and norms that provide security. Declaring peace, in other words, could result in instability around the Korean Peninsula—in effect, the opposite of peace.

There are recent developments that provide optimism for North Korea improving relations with its neighbors and the United States. Since South Korea hosted the Winter Olympics with North Korean participation in February 2018, less threatening rhetoric, more diplomacy, and expanding inter-Korean exchanges have improved the situation on the peninsula well beyond what skeptics predicted a year and a half ago. In a positive sign for humanitarian engagement, Washington has signaled a loosening of financial and visa restrictions to facilitate NGOs providing assistance to North Korea. The new status quo, while hardly a sustainable equilibrium, enjoys less risk of unintended conflict. And even though North Korea has not yet given up any weapons capabilities, its rapid advancement of nuclear and missile technology is slowed by a suspension in testing.

The Trump-Kim summit planned for February 27-28 in Hanoi, Vietnam aims to produce dual roadmaps: one elaborating steps toward denuclearization, the other specifying elements of a peace regime. It would be a substantial achievement if the meeting produced a timetable integrating the two. Freezing the production of fissile material, nuclear weapons, and delivery systems could be rewarded with sanctions exemptions for inter-Korean projects. Having the U.S. and North Korea open liaison offices in each other’s capitals would be diplomatically meaningful and could facilitate verification inspections and humanitarian assistance. Such corresponding measures would be a good start toward realizing what the Trump administration has called “new relations” with Pyongyang and the “final, fully verified denuclearization” of North Korea.

But declaring peace, without achieving more concrete steps toward denuclearization first, risks accepting North Korea as a de facto nuclear state. While North Korea’s suspension of nuclear and missile tests may resemble stability, the freeze is easily reversible and likely temporary. The regime continues to produce fissile material, advance its missile and nuclear technologies, and engage in cyber attacks. Even if Pyongyang agrees to disclose its nuclear assets, it is likely to make an incomplete declaration, offer up known and nonessential sites, and then drag out piecemeal concessions using so-called “salami-slicing tactics.” Policy inertia in that direction—after a declaration of peace—would risk allowing North Korea to go the way of Pakistan, with the Kim regime keeping its nuclear weapons while enjoying international recognition and economic benefits.

While some strategists place faith in the transformative power of economics to peacefully change North Korea from the inside out, economic cooperation is already butting up against sanctions restrictions. Moreover, North Korea shows a lack of willingness to open to international trade and capital beyond what the regime can control. For example, a joint rail survey project to link the two Koreas was recently granted sanctions exemptions by both the U.S. and United Nations. But actual infrastructure connections would require significant material improvements which—like restarting the Kaesong industrial park, a now shuttered joint economic project of both Koreas—are not possible under current sanctions. Efforts by previous South Korean administrations in these areas were derailed because the Kim regime did not trust foreign traffic on the country’s infrastructure and aggressively walled off Kaesong from the North Korean economy.

Declaring peace would make it even more difficult to enforce sanctions and to reassemble the international pressure campaign in response to Pyongyang cheating on denuclearization commitments. Even if a nuclear North Korea can be deterred or militarily contained, its rule of law falls far short of international standards. With a record of exporting slave labor, engaging in illicit trade, and breaking business contracts, there is no possibility of an overnight success story for economic engagement.

Furthermore, North Korea would almost certainly use “peace” to drive wedges between the U.S. and its allies. After an end-of-war declaration, North Korea and voices sympathetic to Pyongyang would begin to question the purpose of Terminal High Altitude Area Defense (THAAD) missile defenses, U.S.-South Korea joint military exercises, and even U.S. troops stationed in South Korea. Various training exercises have already been scaled down, delayed or canceled, raising questions about alliance readiness and interoperability of forces. Meanwhile, Seoul’s contribution to cost sharing for U.S. troops has increased with the recent Special Measures Agreement, but the one-year rather than five-year arrangement requires renegotiation soon.

If South Koreans see the costs of U.S. cooperation rising while the perceived threat of North Korea declines, domestic support for the alliance may be at risk. South Koreans are already divided on the proper course of action with the North. Some progressive South Koreans have accused the U.S. and United Nations Command of creating a bottleneck for the inter-Korean liaison office at Kaesong and people-to-people exchanges at Mt. Kumgang by restricting cross-border traffic. They consider Washington’s position on sanctions as the main obstacle for resuming the inter-Korean economic complex at Kaesong and tourist resort at Kumgang. In contrast, many conservatives in South Korea support sanctions and worry about the Moon administration—with its public approval rate tied to the success of engagement—prioritizing inter-Korean exchanges to the point of accepting any show of progress with the North, opening up Seoul to exploitation by Pyongyang.

A further potentially destabilizing consequence of a “peace agenda” is the erosion of institutions that have helped avoid large-scale conflict on the Korean Peninsula for decades. Last year’s inter-Korean summits yielded a comprehensive military agreement that successfully reconnected some communication lines, removed numerous guard posts, weapons and landmines from the demilitarized zone (DMZ), and set up ground, air and maritime buffer zones. North and South Korea also plan to hold joint excavations of remains from the Korean War. Such military confidence-building measures can help prevent miscommunication and miscalculation but raise questions regarding security vulnerabilities.

North Korea continues to increase its conventional military capabilities without noticeably reducing its deployments, training, or readiness. If peace were simply declared, Pyongyang would likely aim to push the United Nations Command and Neutral Nations Supervisory Commission out of the DMZ and call for an end to the U.S.-South Korea Combined Forces Command. A hastily made end-of-war declaration could damage the legal basis for these authorities that maintain the existing armistice, which is still needed until the parties negotiate and implement a full peace treaty.

Perhaps most concerned by the talk of peace are officials in Tokyo. Japan’s strained relations with South Korea over history issues have detracted from trilateral cooperation with the U.S. and summit diplomacy with North Korea. Japanese policymakers worry that mini-deals short of denuclearization, or reductions in American forces, could leave Japan decoupled from its partners and exposed to the North Korean threat.

In contrast to the early 2000s—when Six Party Talks aimed for multilateral responsibility among the two Koreas, Russia, China, Japan and the United States—the old narrative of the U.S. and North Korea failing to make progress has made a comeback since the first Trump-Kim summit in Singapore. This bilateral blaming distracts from the actual problem, which is North Korea’s failure to denuclearize. A false moral equivalency between Washington and Pyongyang lets China off easy in terms of its commitments to nonproliferation and implementing UN sanctions, while any degrading of American alliances opens up space for Beijing to advance its own vision of regional order.

The final barrier to ending the Korean War is Pyongyang’s record on an integral component of peace: human rights. There have been recent improvements in terms of accountability, as the U.S. added sanctions for violations of freedom of speech and individual rights. The UN Commission of Inquiry report advanced an ongoing movement to collect testimony, and the next UN Universal Periodic Review of North Korea is upcoming in May.

But for many survivors of the oppressive North Korean regime, high-level engagement of Pyongyang produces self-censorship on the part of U.S. and South Korean political leaders. Talks on denuclearization and peacebuilding have overlooked the Kim regime’s massive political prisoner camps, brutal loyalty campaigns, and pervasive exploitation of women. While Trump’s 2018 State of the Union address highlighted rights issues, his 2019 speech did not mention them. Without improvement of human rights, it is inconceivable that the United States would normalize diplomatic relations or that North Korea could shed its pariah status to attract aid, trade, and investment.

Whatever agreements come out of the Hanoi summit, the U.S. and its allies are still far from peace with North Korea. Peace is a worthy goal that should be contingent on North Korea’s denuclearization. The temporary lack of North Korean kinetic provocations should not be confused with real peace. Nor should a peace declaration be the Kim regime’s reward for developing what it claims is an operational nuclear deterrent, as this would set a dangerous precedent for Iran and the international nonproliferation regime.

The Trump-Kim summit can improve upon the status quo, but the effort is not without risks. Given potential spillover effects from domestic politics, regional tensions and global trade disputes, it is vital that the White House be on the same page with other parts of the U.S. government and with allies and partners. Apparent gaps between leadership and diplomatic and security officials, heavy reliance on intelligence channels, and lack of working-level progress raise concerns about whether the bureaucracy is vetting policy changes related to summit negotiations.

Denuclearization of North Korea and peace on the Korean Peninsula require that Washington closely coordinate with Seoul and Tokyo, and to the extent possible with Beijing. That calls for prioritizing policy substance over political theater so that North Korea only receives benefits for concrete progress on denuclearization, conventional threat reduction, and implementing the rule of law.