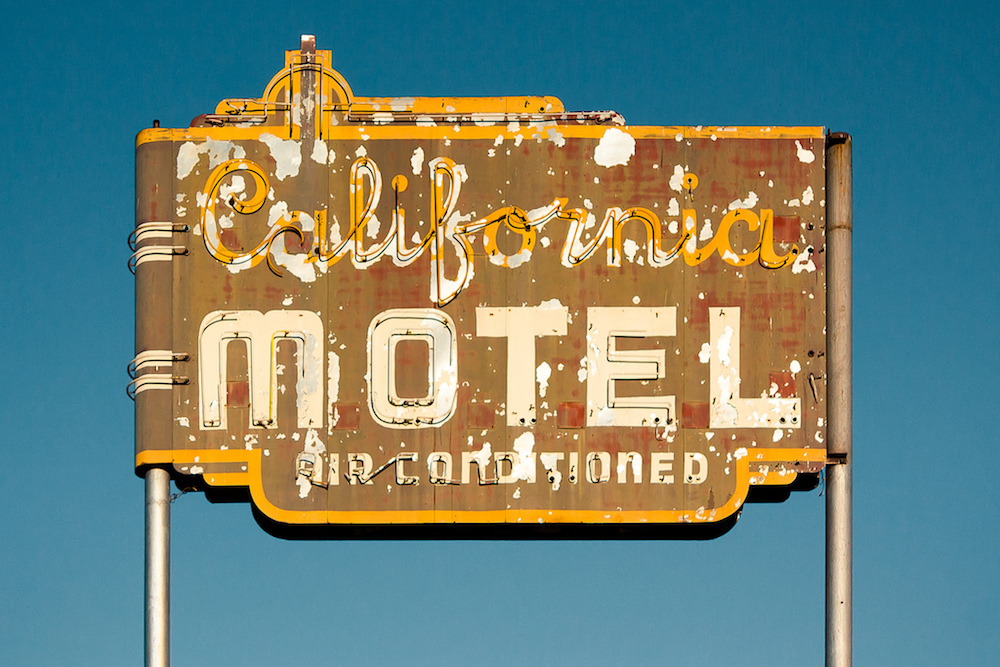 Merced’s Motel California, which is located on East 16th Street, right off of Route 99. Courtesy of Flickr.

Have any grand but unfocused ambitions? Have an idea but no strategy to execute it? How about any half-finished projects clogging up your garage?

Send them to Merced. That’s what the state of California does.

Perhaps this is because it’s so convenient: a city of 83,000 people in the center of the Central Valley, and so close to our most hallowed outdoor place that it’s called the “Gateway to Yosemite.” But whatever the reason, Merced is taking on a role as the self-storage unit for California’s abandoned dreams.

Earlier this month Gov. Gavin Newsom turned to Merced as he decided to slow down the state’s high-speed rail project. In his state of the state speech, the governor said that there wasn’t enough money to complete the first phase of the rail project, from Los Angeles to San Francisco, or even a more diminished plan to go from Bakersfield to San Jose. At least not yet. Instead, Newsom declared that high-speed rail would start at Bakersfield and find its first northern terminus at Merced.

The governor soon faced a firestorm of criticism. And justifiably so. His retreat to a smaller project betrayed years of planning and disruption in the cities along the project’s path—including the condemnation of hundreds of businesses. Since the speech, Newsom has claimed he’s still committed to the entire statewide high-speed rail project. Meanwhile, President Trump is attempting to claw back federal funding for the project.

It’s hard to know what to believe about the project’s future. But if the project does end in Merced, then at least there will be plenty of open land to bury high-speed rail in a large grave, with an appropriately large tombstone to catalogue modern California’s failures of strategy and urgency.

Today’s California thinks of itself as a fast-paced place, but it actually moves quite slowly when it comes to building. High-speed rail was first floated in the early 1980s. In 1996, the state created a high-speed rail authority. In 2008, voters approved a bond to fund part of its cost, and in 2009, the feds gave the project a couple extra billions via the stimulus act. But here it is in 2019, and it looks like this state-of-the-art transit system just might reach Merced. All told, that’s 40 years to create a 45-minute train trip to replace the three-hour drive from Merced to Bakersfield.

And high-speed rail is only one place where Merced represents the terminus of a once-lofty California ambition. Bay Area communities have been trying to create a true transit system to connect Northern California since the 1960s, with the advent of BART. More recently, those plans have extended into the counties beyond the Bay Area with one small train line, the Altamont Corridor Express. The ACE, as it’s known, originated as a collaboration between counties in 1995, and now has plans to reach Merced in the future, perhaps by 2027—which would still be some 55 years after BART’s opening.

“At some point, there will be connectivity from Silicon Valley to the Central Valley,” Merced City Manager Steve Carrigan told the Merced Sun-Star recently. “When? I don’t think anybody knows.”

If the project does end in Merced, then at least there will be plenty of open land to bury high-speed rail in a large grave, with an appropriately large tombstone to catalogue modern California’s failures of strategy and urgency.

The good news is that Merced does its best with what the state leaves it. And the city needs all the help it can get—it suffered some of the largest drops in home values in the country during the Great Recession.

Right now, there is pride and optimism in Merced because of growth that is mostly tied to the expanding University of California Merced campus. But even the UC Merced story is another example of how California treats Merced as a long-term storage unit for grand plans.

The University of California first announced it would open a 10th campus all the way back in 1988, part of what some hoped would be an overdue expansion of the system. But it wasn’t until 1995 that it decided to make Merced the location. And, because of the state’s screwy budget politics and environmental litigation, it wasn’t until another decade later, in 2005, that UC Merced finally opened.

In its first decade and a half, the campus has been the place that admits students who don’t get into their first choice of UC schools. It’s been a leader at serving poorer and non-white students, but it has fewer big-name professors and out-of-state students than other campuses.

Only now does the campus feel like it is ramping up to full build-out, as part of a project to double its size, add research labs and fitness facilities, and accommodate 10,000 students by 2020.

Unfortunately, UC Merced’s expansion has been an isolated case in California. The state’s public university systems have simply not grown fast enough, leaving the state with an estimated shortage of two million college graduates to meets its future economic needs. In many years, thousands of Californians who are eligible for our public universities find there is no space for them, and just 55 percent of Californians who do enroll in universities are finishing their degrees at those places.

The good news is that the city of Merced is feeling some benefits. In addition to expanding its main campus on the city outskirts, the university has also expanded downtown, both by renting space and then by opening a $45 million Downtown Campus Center last year. That, in turn, has inspired new investment in downtown, including a hotel and a renovation of The Mainzer, a historic theater.

UC Merced’s downtown center is a short walk to the likely site of its high-speed rail station, where Martin Luther King Jr. Way meets State Route 99. From that spot, it’s possible to imagine Merced as a model 21st century crossroads, with integrated transit that gives educated workers a short ride to jobs and meetings on the coast, relatively cheap housing that attracts young families, and a university that has doubled or tripled in size, radically raising Central Valley education levels.

But for all that to happen, high-speed rail would have to continue past Merced into the Bay Area, California would need a massive expansion of higher education, and the state would have to provide the foresight, strategic planning and solid funding that makes big projects possible.

A more likely outcome: California can’t finish building the future it promises, so Merced must keep taking what it can get.