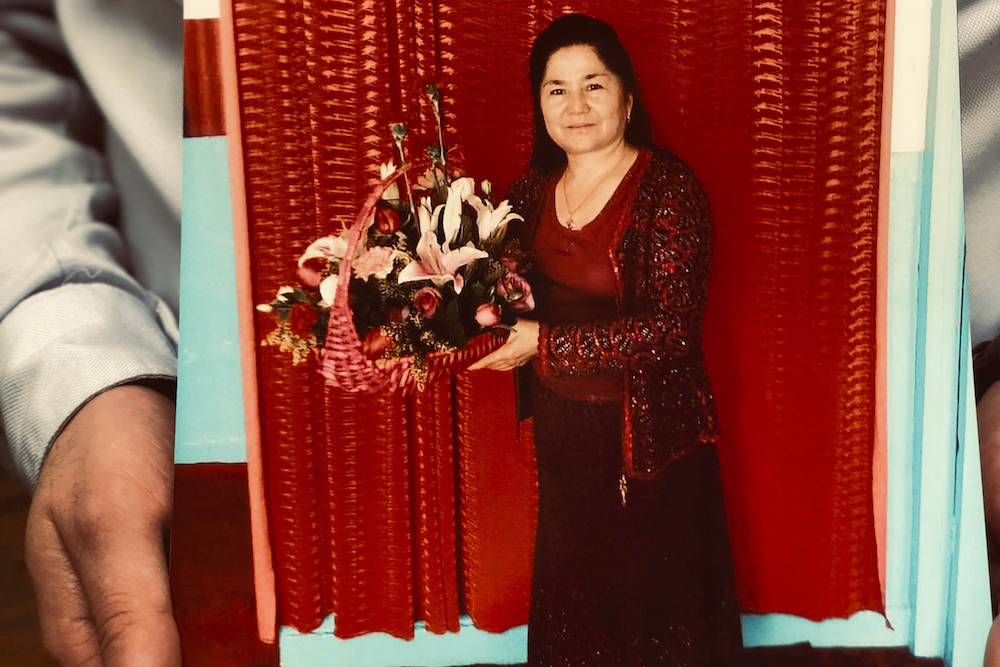 Ferkat Jawdat holds a photo of his mother who he believes is being held in a concentration camp in Xinjiang, China because he has not heard from her in more than a year. Jawdat showed the photo at a gathering in Washington, D.C. to raise awareness of people who are being held in the camps. Photo by Christina Larson/Associated Press.

To get arrested today in Western China, you don’t have to do much more than buy a SIM card for a relative. You could easily find yourself detained for having worked or studied overseas. The same goes for downloading the wrong pop song, reciting a Quranic verse at a funeral, or Skyping a relative or spouse in another country. These are among the “offenses” identified by more than a million civilian surveillance workers who have visited the homes of Muslims in the region since 2014 as part of a patriotic “educational” campaign.

The result is that approximately one million Muslims, most of them Uyghurs—an ethnic group of around 11 million who are concentrated in Xinjiang, a vast western region of China—are currently held in what many sober, cautious people, with little inclination to hyperbole, are calling concentration camps. Though authorities denied the existence of these camps throughout 2017 and most of 2018, this became unsustainable in the face of testimony from former detainees and evidence from satellite imagery and official documents authorizing the camps’ construction.

One can only conclude, as a United Nations human rights panel did in August 2018, that Uyghurs and other Muslim minorities are “being treated as enemies of the state based on nothing more than their ethno-religious identity.”

From interviews with people who’ve been released, it’s become clear that detainees in these camps (who also include Kazakhs, Kyrgyz, and other minorities from the region) have been charged with no crime and are from no particular age, class, or professional demographic. The young and the elderly, farmers and teachers, the secular and the devout: All are being held in newly built or repurposed structures surrounded by barbed wire, reinforced walls, and watchtowers. Every moment of their day is controlled by the authorities. Former detainees have spoken of cramped conditions, sleep deprivation, interrogation, torture, and a sustained campaign of political indoctrination that requires them to denigrate religion, recite political slogans, and sing patriotic songs like “Without the Communist Party, There Would Be No New China.” Though some detainees have been released after a few months, many have been held for a year or more.

The Chinese state has justified the camps by claiming that they are not what they seem. In October 2018, Shohrat Zakir, the Xinjiang governor, described the camps as vocational training centers whose purpose is “to get rid of the environment and soil that breeds terrorism and religious extremism.”

The government says that the camps are the latest installment in what the Chinese authorities have called a “People’s War on Terror.” Since September 11, 2001, China has claimed to be fighting a domestic Islamist terrorist threat in Xinjiang, which it has tried to link with al-Qaida, the Taliban, and the Islamic State. In the name of combating this threat, it has built up an extensive security network that combines surveillance technology, digital censorship, and an intrusive police and military presence across the region.

Throughout my 10 years of reporting on Xinjiang, I have attempted to pick apart this tangled claim. While the details certainly matter, my overall conclusion is that the threat has been grossly exaggerated. Sporadic outbursts of violence against the state have taken place over the last three decades, but the overwhelming majority of these incidents are better understood as local, desperate responses to cultural and economic inequalities produced by government policy rather than “terrorist” acts. Even the most violent events in which Uyghurs were involved—the riots in Urumqi in 2009 that left at least 200 dead, the killings at a train station in Kunming in 2014, and the attack on a market in Urumqi the same year—had disparate causes and motivations. Both the West’s war on terror and the consequent rise in Islamophobia have facilitated the Chinese government’s policies in Xinjiang.

In fact, these repressive policies are an attempt to find a long-term solution to a “problem” that has nothing to do with terrorism or religious extremism, but stems from the history of the region and its peoples. The geographic boundaries of the area now called “Xinjiang,” or “New Territory,” only took shape in the 18th and 19th centuries, when the Qing dynasty conquered the area—albeit partially at first. (It had been only loosely part of earlier dynasties.)

Even after the Qing took control, the area remained culturally and economically oriented toward the Ottoman and Russian Empires. Only with the founding of the People’s Republic of China in 1949 did Xinjiang become fully incorporated into China. Officially sanctioned Chinese histories today deny this by stating that, “Xinjiang has since ancient times been an inseparable part of the motherland,” a position that few Chinese historians held before the early 20th century.

Though the term “Uyghur” has a long history dating back to the sixth century, it’s been used to designate different groups of people whose attributes and fortunes have shifted with the flux of kingdoms and empires. In its current sense, “Uyghur” is generally agreed to be the result of political and intellectual debates within the region in the late 19th and early 20th century—what historian David Brophy calls a “palimpsest of Islamic, Turkic, and Soviet notions of national history and identity.” The term found purchase with the people in Xinjiang a century ago because it reflected a sense of shared identity based on common religious beliefs, social traditions, language and culture, and some degree of physical resemblance.

Uyghurs’ awareness of their deep roots in the region drives a strong sense of identification that takes precedence over contemporary notions of the “Chinese nation,” or “Zhonghua minzu.” Uyghur culture, traditions, and identity are the manifestation of this separate history.

It is this history which has now become problematic for the Chinese Communist Party. Even Uyghurs’ long attachment to the region, which the full name of the region acknowledges—the Xinjiang Uyghur Autonomous Region—has come under attack. Yasheng Sidike, the mayor of the regional capital Urumqi, wrote in a newspaper article that Xinjiang wasn’t the home of Uyghurs, but of all ethnicities, and opined that “the Uyghur people are members of the Chinese family, not descendants of the Turks, let alone anything to do with Turkish people.”

Across Xinjiang, particularly in the south, a sense of distinctness from the rest of China used to be both palpable and immediate. The blend of Uzbek and Turkish-influenced pop songs playing in shops, the smoke from lamb kebabs, and the painted adobe walls and ornate shutters of the older houses all evoked Central Asia.

It has thus been unsurprising that in recent years, as Uyghurs themselves have been subjected to more intrusive forms of monitoring and control by the state, their old residential and commercial districts have been demolished. The destruction of the tangible history of the region, coupled with the continuing influx of Han migrants from other regions of China, has been yet another way in which the state has sought to weaken Uyghur identity. As one Uyghur in Kashgar put it, “[j]ust look all around you. You’ve seen it yourself. We’re a people destroyed.”

Before the current campaign, the Chinese state paid lip service to the idea that some aspects of Uyghur culture were worth appreciating and preserving, though they remained suspicious of anything they perceived to have nationalistic or religious elements.

The Chinese Communist Party’s need for total control has grown far worse since Xi Jinping took control in late 2012. The official rationale behind the camps and other repressive policies in Xinjiang is that ethnic minority identity itself represents a threat to national unity and stability. Their aim is to “break lineage, break roots, break connections, and break origins,” so as to “strengthen interethnic contact, exchange, and mingling.” The ultimate goal is thus the assimilation of Uyghurs, Tibetans, and other minorities into one “Chinese nation.” This concept has a long history in Chinese Communist Party discourse. The camps are arguably only the most drastic part of a long process of marginalizing Uyghur culture and identity, perhaps the most explicit of which has been the removal of Uyghur language instruction from the education system.

The government’s approach does not seem like a blueprint for stability and national unity because the vast scale of this government persecution only underlines the differences between the Uyghurs and the state as a whole.

One of the most revealing aspects of the latest detentions is the large number of prominent Uyghur intellectuals, artists, and athletes who have been targeted, many of whom had previously been endorsed and supported by the state. The Chinese Communist Party is now so determined to eradicate Uyghur identity that promoting Uyghur literature or folklore is politically suspect. One impetus for this is certainly Xi Jinping’s ambitious Belt and Road Initiative, a program of infrastructure development and investment in Europe, Asia, and Africa, of which Xinjiang is “a core region.” Stability, or at least the appearance of it, is thus vital in Xinjiang.

Though there have been many waves of repression against the Muslim peoples of Xinjiang since the Communists took power, the pervasiveness and expense of the current campaign suggests it is intended to prevent the return of even the precarious (and often terrible) normality that existed before. While many of the current detainees are likely to be released at some point, the detentions won’t stop. The climate of fear, trauma, and suspicion created in Xinjiang isn’t going to dissipate.

Yet there’s also something naïvely ahistorical about the campaign. Previous targeting of minority culture during the Cultural Revolution (1966-76) arguably only strengthened people’s sense of identity in the region, as did the banning of some Uyghur cultural practices in the 1990s. Beyond China, such colonial-scale oppression has often promoted cohesion and acts of resistance among the colonized.

The government’s approach does not seem like a blueprint for stability and national unity because the vast scale of this government persecution only underlines the differences between the Uyghurs and the state as a whole. The more likely outcome is that it will lead to the kind of violent opposition the government claims the camps combat, to which the authorities will respond in even more draconian fashion. They may well end up creating the monster they claim to be fighting already. And if they are willing to take such extreme measures now, the world should wonder how much worse their tactics may become when faced with the real thing.