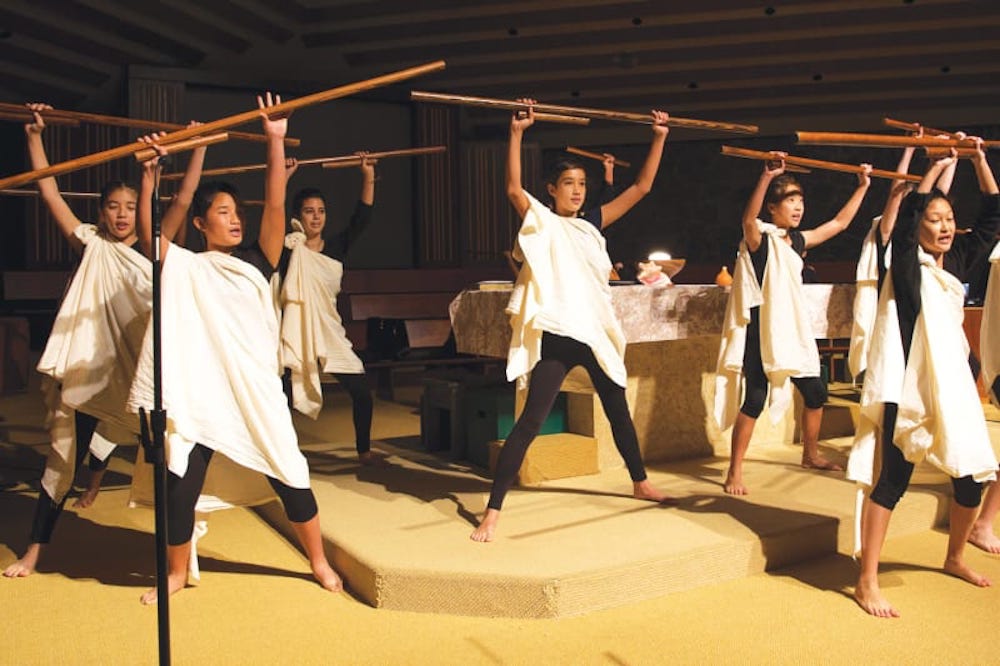 Middle school students perform a hip-hop retelling of the life of ‘Ōpūkaha‘ia for faculty, staff, alumni, and community members. Courtesy of the Punahou Bulletin.

Deborah Li‘ikapeka Lee, a young Native Hawaiian (Kanaka Maoli) woman, woke in the wee hours of an October night in 1992 to an inner sensation, impossible to define and equally impossible to ignore.

Alone and unsure of what was happening to her, she feared illness and anxiously rose from her bed, searching for the comfort of her Bible. The sensation continued to well up inside her, forcing its way out, yielding a voice that spoke as clearly as if its source was standing in front of her. She heard five words: “He wants to come home.”

The “he” in Debbie’s spiritual visitation was her seventh-generation cousin, Henry ‘Ōpūkaha‘ia, who was the first Native Hawaiian to become Christianized. Born in 1792, his parents were brutally slain before his childhood eyes by Kamehameha I’s warriors, and he contemplated leaving the Big Island in the first decade of the 19th century rather than remaining there as an orphan. While training to become a kahuna, a Hawaiian spiritual leader, at the Hikiau Heiau, a traditional place of worship in Nāpo‘opo‘o at Kealakekua Bay, ‘Ōpūkaha‘ia secured passage onboard an American merchant ship, sailing halfway around the world hoping to replace pain and memory, attempting to outrun his survivor’s guilt, and seeking peace from the violence he experienced in his youth. 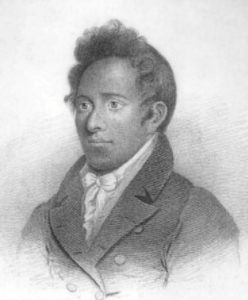 Fatefully, his journey took him to Connecticut, where he was introduced to Christianity and experienced a revelation that led to him accepting Jesus as his personal savior. He studied the Bible in hopes of returning home as a missionary to convert his fellow Hawaiians to the Gospel, but he never fulfilled his wish. He died of typhus fever in 1818 and was buried under the frozen New England sod.

And there his journey stalled, far from his homeland, until 174 years later when Debbie Lee heard of his desire in the still of the night. Soon, she launched the effort to bring cousin Henry home.

As the Connecticut State Archaeologist, a position I held for almost 30 years, I had the responsibility of supervising the disinterment and forensic identification of the surviving physical remains of Henry ‘Ōpūkaha‘ia per the request of his genealogical descendants. We worked closely with the Lee family and a team of funeral directors, forensic scientists, archaeologists, historians, and church officials to conduct the exhumation and prepare ‘Ōpūkaha‘ia’s remains for the final leg of his repatriation to the Big Island of Hawai‘i, the isle of his birthplace.

To fulfill my duties in a professional and appropriately respectful manner, I learned more about ‘Ōpūkaha‘ia from reading his Memoirs, published posthumously in New England by his tutor Edwin Dwight. He descended from a family of Hilo chiefs on his mother’s side, distant kin to Kamehameha I. He developed into a resilient, intelligent boy with a sense of humor and the ability to mimic village members. He eventually made his flight by swimming out to the Triumph, an American merchant ship anchored in Kealakekua Bay and was taken aboard as a sailor. Captain Caleb Brintnall wrote the Anglo appellation “Henry Obookiah” into the ship’s logbook, which would remain the name he would be known by during his sojourn in New England.

Arriving in New Haven in 1809, “Henry Obookiah” was introduced to Christianity by the educators and religious families with whom he resided, including the Rev. Timothy Dwight, then president of Yale College and a leading light in the Second Great Awakening. At first, Henry did not accept the new religion into his heart; he only accepted it in an intellectual sense in his great desire to learn. His full conversion came about when he had a revelation in a woodlot while working for the Rev. Samuel Mills and his family in Torringford, Connecticut.

Once converted, “Obookiah” immersed himself in the Gospels, memorizing every story and miracle, while absorbing his English spelling book so he could write and read the Bible more proficiently. He made rapid progress in his religious training, translating Hebrew chapters of the Bible into a phonetic Hawaiian alphabet he had developed. His new purpose in life was to bring his learning and the Gospel home with him to Hawai‘i. The intellectual and spiritual example of ‘Ōpūkaha‘ia led the American Board of Commissioners for Foreign Missions to develop the Foreign Mission School in Cornwall, Connecticut, to prepare young indigenous men to return to their homelands with the Christian Gospel in hand. Henry was their first and leading student.

In the midst of this time of great intellectual energy, ‘Ōpūkaha‘ia contracted typhus fever in the winter of 1818 and was soon in critical condition. According to Edwin Dwight’s moving account of ‘Ōpūkaha‘ia’s death, when Henry was asked if he was afraid to die, he cried, “No, I am not. Let God do as he pleases.” Then again, he so desperately wanted to live. Live to be a powerful witness to the one, true God. Live to bring salvation to his people. Raising his hands heavenward, Henry lamented, “Oh, how I want to see Owhyhee!” His approaching death was peaceful, and he seemed free of pain for the first time in weeks. With his compatriots beside his bed, he spoke in his native language, “Aloha oe,” “My love be with you.”

Henry ‘Ōpūkaha‘ia died on February 17, 1818, and was buried under a table-topped granite monument, which was the largest and most elaborate shrine in Cornwall Cemetery at that time, demonstrating the love the New Englanders of the Foreign Mission School had for this young Hawaiian man.

As Henry “Obookiah’s” mortal remains reposed beneath a hilltop cemetery in Connecticut, a ship christened the Thaddeus set sail from Boston harbor on October 23, 1819, en route to Hawai‘i. In fulfillment of ‘Ōpūkaha‘ia’s missionary promise, the brig carried a company of two ministers, two teachers, a doctor, printer, farmer, all of their wives and children, and four Hawaiians.

When the ship arrived in Kailua-Kona on April 4, 1820, Hawaiian society was undergoing great changes, and many native people had died since the arrival of Captain James Cook in 1778. By 1853, 90 percent of all Kanaka Maoli had perished of Old World diseases for which they had had no exposure and no immunity. Within four years of the arrival of the Thaddeus, over 18,000 Hawaiians, 20 percent of the native population at the time, had converted to Christianity. While ‘Ōpūkaha‘ia’s corporeal journey home would take another 175 years, his formidable influence had transformed Hawai‘i forever.

After she was awoken that night in 1992, Debbie Lee spent ten months polling family members until she gained their consent to exhume Henry’s remains from Cornwall Cemetery and bring him home to Hawai‘i. She resolved to give Henry’s life contemporary spiritual meaning by returning his physical remains, his iwi, back to Hawai‘i in fulfillment of his deathbed wish.

Our mandate as the state archaeologists was to remove for repatriation the physical remains of ‘Ōpūkaha‘ia, so we commenced excavations below his granite stone monument in Cornwall Cemetery. While moving my trowel gently over the soil, leveling the head region of the coffin at a depth of five feet, I heard a dulled tone.

Immediately thinking I had encountered a small stone or coffin nail, I put my trowel aside and grasped a small, fine-haired paintbrush. The material encountered felt hard, too hard for bone that had been in Connecticut’s acidic soil for almost two centuries, but as my brush swept the granular sand aside, uncovering a one-inch diameter circle, I recognized the rounded structure of the forehead and realized his skeletal remains were firm, unusually well-preserved for a grave of this time period. In fact, ‘Ōpūkaha‘ia’s skeleton continues to be the best organically preserved we have ever encountered in a historic New England cemetery. I remember thinking to myself, “Henry will return home.”

Henry ‘Ōpūkaha‘ia died on February 17, 1818, and was buried under a table-topped granite monument, which was the largest and most elaborate shrine in Cornwall Cemetery at that time, demonstrating the love the New Englanders of the Foreign Mission School had for this young Hawaiian man.

Debbie Lee, wanting the very best for ‘Ōpūkaha‘ia’s return to Hawai‘i, arranged an itinerary that would be a lasting tribute. The two-week, two-island journey began with a farewell ceremony at the United Church of Christ Congregational in Cornwall, where I, along with our archaeological team, were honored to serve as pallbearers. This was followed by services on O‘ahu at Honolulu’s Kawaiaha‘o Church, the Bernice Pauahi Bishop Memorial Chapel, and Kaumakapili Church.

Then ‘Ōpūkaha‘ia’s remains were flown to the Big Island of Hawai‘i. There, Henry’s casket was lashed between two outrigger canoes at Pu‘uhonua o Hōnaunau, “the Place of Refuge.” Among the canoeists paddling northward to Kealakekua Bay, was Henry Ho‘omanawanui, first cousin to Debbie Lee and namesake of the Christian martyr he was accompanying home. When the outrigger rounded the southern point into Kealakekua Bay, Ho‘omanawanui searched the wooded hills above the harbor for the white spire of Kahikolu Congregational Church, soon to be the site of ‘Ōpūkaha‘ia’s final resting place. Debbie had instructed Ho‘omanuawanui to swim toward the shore once the steeple came within sight. Spying the church, he dove into the cool waters, recreating in reverse ‘Ōpūkaha‘ia’s outward swim to the anchored Triumph, metaphorically completing Henry’s return home.

The final segment of the welcoming home tour brought Henry to Kahikolu Congregational Church and Cemetery in Napo‘opo‘o. After church services attended by over 200 family and friends on the afternoon of August 15, 1993, Henry ‘Ōpūkaha‘ia’s casket was lowered by ropes beneath a beautiful, black volcanic stone monument overlooking the harbor from where he had set out on his journey to find peace and self-fulfillment. This was part of a ceremony called “kao he olahou,” “the bamboo lives again.”

Bringing Henry home grew beyond immediate family interest, extending across the entire Hawaiian community, and emphasizing the significance of repatriation. Facilitating the completion of his long journey developed into something beyond the return of an individual ancestor.

The “Island Boy” who had left Hawai‘i searching for peace and purpose; who came to Connecticut and received a scholar’s education and converted to Christianity; who had found love in God and translated the Book of Genesis into his phonetic Hawaiian alphabet; whose martyrdom inspired Protestant missions throughout the world, had finally come home.