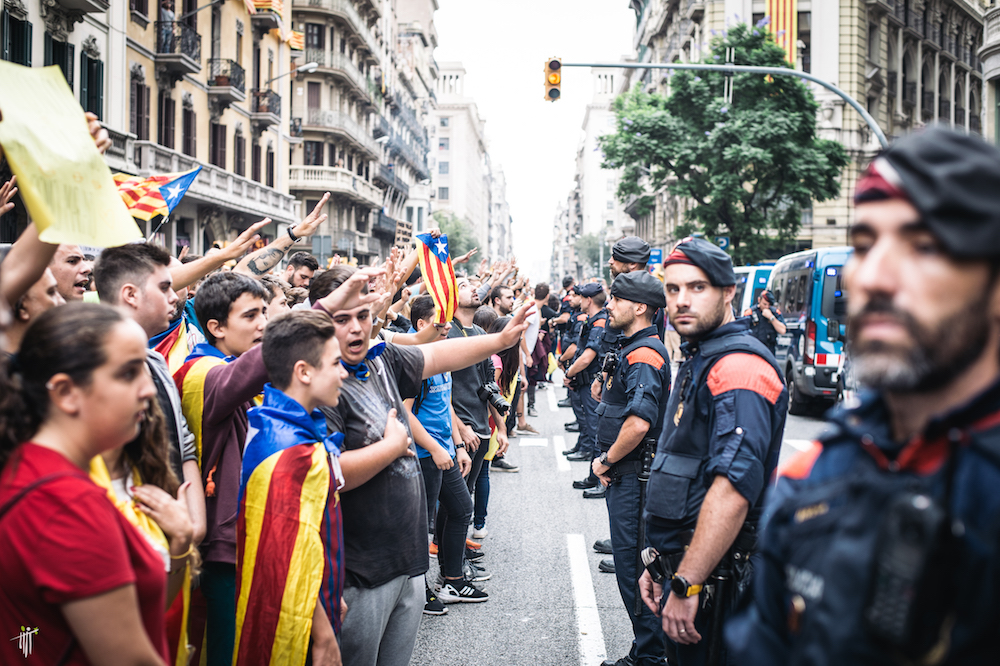 Catalan police officers secure the outside of the Barcelona headquarters of Spain’s national police force amid a protest against violence during a 2017 referendum vote. Courtesy of Flickr.

And it’s an urgent question, because recently there has been an increase in the number of movements for national self-determination and secession. Worldwide, between 1994-2017, I found 55 referendums registered, from Catalonia to Scotland, New Zealand to the Falklands, from Quebec to Iraqi Kurdistan. Most involved not full independence but rather a change in the political status of a state, or a separation or an integration of territory within an existing state. Whether such votes make sure that every voice is heard and ease difficult changes, or whether the votes tip countries towards more conflict and even violence, depends a great deal on the process around separation, and how democratic it truly is.

There are long-standing rules and processes for splitting up. The right to self-determination, as a collective right of peoples, is enshrined in all kinds of international covenants. But such secessions, or decisions to combine with another state or seek a different status internationally, cannot be unilateral under current international law. There must be a process.

There are, surprisingly, three possible methods to reconfigure one’s state—of which a referendum, or popular vote, is one, but is not required. The other two methods for applying the right of self-determination, as outlined by the International Court of Justice, include the election of an assembly of representatives entitled to such a decision, or a decision by the General Assembly of the United Nations.

As a scholar living in South Tyrol, a part of Northern Italy with a strong independence movement, I’ve made a study of self-determination efforts around the world. And I’ve become convinced that popular referendums should be a requirement when it comes to enshrining the constitution of a new sovereign state, or beginning secession or integration within a state. Referendums should also be required for changes in the political status of part of a state’s territory (such as autonomy or other forms of power sharing).

Popular votes offer a chance for participation to each legal inhabitant of a concerned area, making the plan that arises democratic, representative, and legitimate enough to have force.

But a referendum in and of itself is no guarantee of legitimacy. The world has seen many informal referendums organized in a unilateral way, outside of democratic negotiation and unregulated by constitutional processes. Territorial entities that seek to secede this way almost never gain international recognition, and they can sow international conflict as well.

For the nations of the world, the question is how to hold such votes in ways that produce accurate results that have legitimacy and don’t provoke deeper conflict or war. This is a tricky business, since most independent countries in their constitutions do not allow the right for secession of a part of their territory and thus do not provide for the right to hold referendums on such issues.

International law also doesn’t offer much in the way of specific guidance about how to hold such referendums. And the details can be complicated, in part because international law has been designed to recognize conflicting interests. The most important United Nations covenants, such as the Friendly Relations Act of 1970, recognize both the right of states to defend the integrity of their territory and the right to self-determination of peoples within an existing state.

Since 1994, many of the calls for self-determination have come from inside Europe, and their outcomes demonstrate the potential and perils of these movements. Currently, there are movements afoot in South Tyrol, in Flanders (now part of Belgium), in Greenland (Denmark), in the Basque Country, in the Republika Srpska of Bosnia-Herzegovina, in the eastern part of Ukraine (Donbass), and in Catalonia.

Troublingly, in three European regions, secession has de facto already happened, but not by constitutional methods, but rather with violent means with military support from neighboring countries or “kin states”: Northern Cyprus in 1974, now the Turkish Republic of Northern Cyprus, in Transnistria in 1994, formerly a part of Moldova, and in 2014 in the Autonomous Republic of Crimea, part of the Ukraine, later annexed by Russia after the March 2014 referendum on self-determination, an illegal act in terms of constitutional and international law.

De facto it also happened in the so-called People’s Republics of Luhansk and Donetsk in Eastern Ukraine, a still-open conflict. In the 1990s, two formerly autonomous regions of Georgia split away (South Ossetia and Abkhazia), and also the area now known as Artsakh split from Azerbaijan. Of course, all those entities held referendums—many of dubious democratic quality—recording huge majorities in favor of secession. But all of those self-declared republics failed to gain international recognition.

All these bad examples should not sour us on the power of a democratic referendum. Such votes can be done well. Take Scotland and its vote on independence from the United Kingdom in 2014. The process there demonstrated democratic maturity and gave the verdict legitimacy. One lesson is that democratic negotiation may be more important than law or precedent when it comes to constructing such a popular vote.

The British government, after negotiations and consultations with the Scottish government and Parliament, agreed to hold a popular referendum on the sovereignty of Scotland, although no U.K. constitutional law provides for such a right of a member country of the U.K.

In September 2014, 55.3 percent of Scottish voters rejected the option of secession. That verdict didn’t end the controversy entirely—after the Brexit vote in June 2016, the Scottish National Party announced it would push for a new referendum on independence—but the healthy debate settled the question for a time, and left participants on both sides satisfied with the vote. (You may wonder about Brexit, but I don’t consider it here because it belongs in a different category, since it is about an entire country leaving a union based on politics and trade.)

The first step to a democratic vote is establishing a procedure for it. Creating processes that have time to be established, and providing time for consideration, can reduce the risks of such votes. Take the recent November 4, 2018 vote in New Caledonia on self-determination. New Caledonia, in Oceania, is one of the autonomous overseas territories of France. The vote was conducted under a 1998 accord, called Nouméa, that gave New Caledonia the right to decide freely whether to keep being a part of France as an autonomous entity or become an independent country. So, when the vote was conducted 20 years later, there were no questions about its legitimacy. Other French overseas territories also had used the means of referendums to determine their political status. This fall, New Caledonians voted against independence in a peaceful, legitimate vote.

But without procedure, you may have conflict, even in a democratic society.

One lesson is that democratic negotiation may be more important than law or precedent when it comes to constructing such a popular vote.

Some countries bar such votes, causing themselves considerable trouble. The Spanish Constitution, for example, does not allow its autonomous communities to hold referendums on secession; unlike in the U.K., the constitution stresses the indivisibility of the state and considers democratic efforts for self-determination of smaller nations inside Spain as attacks on the legal constitutional order or even as acts of rebellion. For this reason, the nation’s Supreme Court banned the Basque Country in 2008 from holding a referendum on declaring a different political status; and, as a result, conflict on that subject remains.

And in 2017, after the referendum on independence of Catalonia, the president and the government of Catalonia were persecuted under penal law for having organized such a referendum. While a slight majority of Catalan voters voted yes to independence, and the independence movement was peaceful and democratic, there was no mutually agreed process. And so the result was declared illegal and invalid by Madrid. Protests followed, and the conflict became more serious. Sooner or later a new referendum will need to be held that is fair and correct under constitutional and international law—as the Catalans have this fundamental right and deserve this democratic opportunity. The 2014 referendum in Scotland may serve as a shining example.

Ultimately, studying how states acquire self-determination has led me to a simple, but slightly paradoxical conclusion: The best path to splitting up your country begins with coming together to agree on the rules of a referendum.

That’s because the kind of procedure established for self-determination sets the course for future relationships—both between the independence-seeking territory and the state it seeks to leave, and between those two entities and the rest of the world.