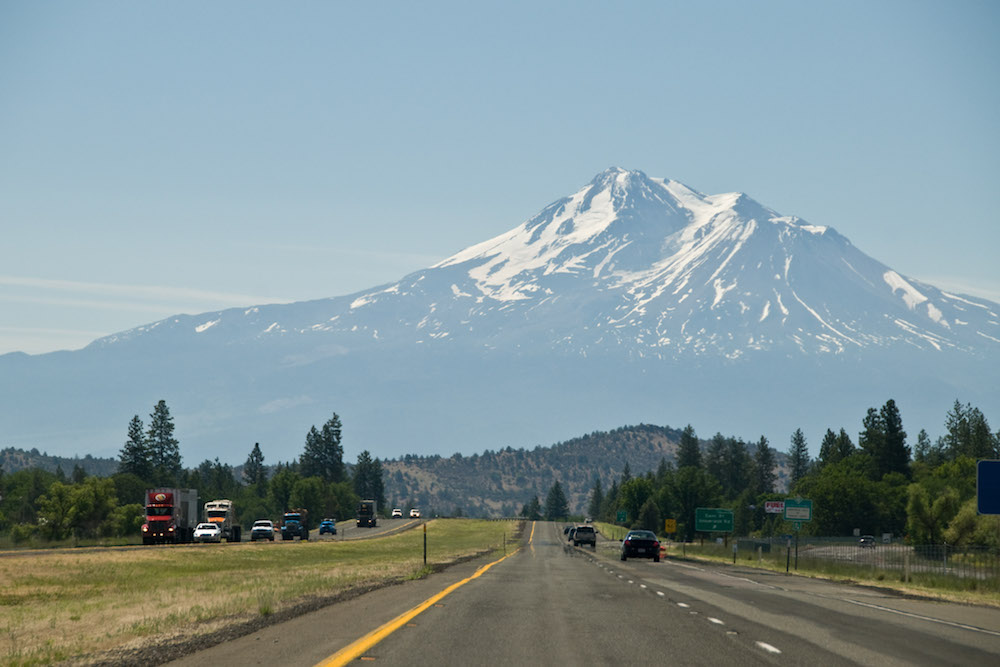 The view from Interstate 5 heading towards Mount Shasta. Courtesy of ArtBrom/Flickr.

Every Friday at Zócalo Public Square we publish a new poem. Our daily ideas journalism and free public events aim to connect people and ideas, exploring our shared human condition and the world we’ve made. The Friday poem continues that spirit, and for the last eight years, we’ve awarded a prize to the poem that best evokes a connection to place.

This year, 398 poets submitted a total of 986 poems, transporting us to places both natural—“mist, some trees, two deer”—and unnatural: a freeway interchange with a chopper hovering overhead. Coming from all over the country—Texas, South Carolina, and beyond—the poems showed how some places, while perhaps physically left behind, never really leave us.

This year’s winning poem, selected by Zócalo poetry editor Colette LaBouff and the editorial staff, evokes an almost, but not quite, imaginary place called “the State of Jefferson” as well as Interstate 5, a thruway that runs parallel to the Pacific Ocean and travels the entire length of the West Coast.

We’re thrilled to award the $500 Zócalo Public Square Poetry Prize to Erica Goss, a California native who now lives in Eugene, Oregon. She will deliver a public reading of her poem at Zócalo’s annual Book Prize award ceremony on May 2 at the National Center for the Preservation of Democracy in Los Angeles. Please see more details on the public reading here.

Erica Goss is a poet, a teacher, and co-founder of Media Poetry Studio, a poetry and film camp for girls. From 2013-2016, she was the Poet Laureate of Los Gatos, where she organized many town activities around poetry and hosted Word to Word, a Show About Poetry on KCAT Cable TV. She has published four books of poetry, most recently Night Court.

Her Zócalo Poetry Prize-winning poem is below, followed by a brief interview.

The State of Jefferson

Trucks shuffle in the slow lane.
Mt. Shasta’s a crazy white cone.
I drive as fast as I dare.
Car my shelter, my tiny house
of spiders’ nests and trash. Even
in an imaginary land,
you need to refuel: 8.5
gallons of unleaded and
I-5’s traditional cuisine:
crinkly bags of Chex Mix and
Sour Worms at Manfredi’s
Food & Gas Depot in Dunsmuir.
On the passenger seat, a
thumb-sized jar of my father’s
ashes. I’d be lying if
I said it didn’t give me
a weird little thrill to have
him sit where I sat as a
child, those deeply dull hours
in our Dodge Dart, him driving
too fast and lecturing me
about dog breeds and the French
Revolution. Just after
the sign that says “College Weed”
with arrows in front of each
word pointing in opposite
directions, I take the curve
a little fast, reach over,
right the jar of my father’s
ashes, saying, sorry, did
I scare you? We hurtle past
the “Oregon Welcomes You”
sign with its eight black trees spot-
lighted in the evening
dusk. I’m flying, faster and
faster down the mountain to-
wards Ashland but we’re still in
Jefferson, my father and
I, land of the elegantly
rusting Penelope the
Dragon, of signs proclaiming
“No Monument” and “Bigfoot
Crossing,” of few people and
a few million cows. I chew
the last of the Sour Worms.
High-fructose powder dusts my
fingers. How you doing, dad?
He doesn’t answer. Perhaps
at last, he’s fallen asleep.

We spoke with Goss about the sorts of places she’d never write about, how she came to write the poem, and the real State of Jefferson.

Are there any places you’d never write about?

I do write poems about place a lot but I think that might be a product of getting older, where details of the places where you once lived start coming back to you.

But … I think I will not write about a place I’m in, at the time I’m in it. When you’re in a place everything seems to be important, and it’s hard to see the details that make a good poem. I don’t want a poem to sound like a travel guide; I want to invoke you emotionally as a reader. I want you to smell that high-fructose corn syrup and feel that cramped, little car. And it’s only when I have some distance, that I can say, “It’s the junk food.”

The only thing I put in the poem that’s one of the things I look for when I drive on I-5 is Mount Shasta. Mount Shasta is one thing I always look for—because it’s so weird and it’s so different from all the other mountains. It’s a halfway point and you can look at it for at least an hour—it kind of comes and goes throughout the drive.

How did you start writing this poem?

I had actually intended to do a poetry video of “The State of Jefferson.” I had my video camera propped up on a tripod, and pillows in the car, and I took video as I was driving. The video wasn’t very interesting and I didn’t see how I was going to make a story of this. But then I realized that the story had to be about the place, not about the trip.

I started writing down the details of the drive. I always stop at the little town of Dunsmuir to buy gas, and I buy junk food there that I’d never eat anywhere else but while I’m driving on I-5. That’s the I-5 traditional food—and it’s usually off-brands with the crinkly plastic wrappers. And after you eat it you kind of feel sick from the sugar. … I hadn’t written any of those things down, but then when I watched the video I realized, oh, here is the poem, here’s the story.

Is “the State of Jefferson” a real place?

The State of Jefferson was first proposed by someone in the 1940s. They wanted to take the top half of California and the bottom half of Oregon and make a new state. And the reason for that is that both areas have low populations but vast areas of land, millions of acres. And so what they wanted to do was make another state, and then they’d have more political power... The other thing about the State of Jefferson is that every few years someone brings it up again and tries to create it. But they never get anywhere with it.

But they have this identity there. They’re much more politically conservative there than the bulk of Californians or Oregonians. It’s a very rural and agricultural area—which is why I put “a few people and a million cows,” because that’s really what the population is. It’s cows and people, differently proportioned.

I drive that highway pretty frequently, 1-5 between California and Oregon, and I thought, “This is a place.” It’s a place that’s longed for. It’s a wished-for place by a small number of people. And the rest of the country, of course, does not want this to happen. It’s a longed-for place. And it’s real, and it’s not real.

In the poem, there’s a second important place—your car. Can you tell us a little more about it?

I have this little Honda Fit, and it’s a very small car, and there are lots of big trucks on this road. And so, I feel like it is my little pod, and I furnish it with wrappers, and my purse, and odd little things.

The road is liminal because you’re always moving on it. You don’t want to stand still on the road because you won’t get where you’re going. But while you’re moving, you’re also sitting still in the car. When I was a kid I always wondered about that: How could I be still but still moving? I’d think about that juxtaposition.

Your poem weaves together two places in time: When you were a kid and your dad was driving, and now, when you’re driving and your dad’s ashes are in the passenger’s seat. Can you tell us about those two moments in time?

My dad was an intrepid driver, and I have written a couple of poems about him and his relationship with cars. His dad owned a garage, a Mobil station, in Downtown LA. It was nothing for my dad to get in the car and drive for hours and hours on end. But of course, my brothers and I were dying of boredom. We didn’t have a radio, and it was just hot¬—there was no air conditioning. Those were just miserable drives. My dad could either get lost in his thoughts and not say a word for hours, or he would just go and ramble about all sorts of things. He was a wonderful eccentric and a complicated human being.

And so, there was this little mean streak in me … putting my dad in the passenger seat, driving on a long, boring road, and saying: “How you doing? Are you bored?” That little story of my dad snuck in. I didn’t intend it, but once it was in, I let it be.

But being really, really bored—that’s the landscape of the West Coast, right? … Now that I live in Oregon, I-5 connects all of the major towns, and there are even fewer people here. So, it’s another reminder of how big this landscape is and how long it takes to get anywhere … the car really is your home because you’re in it for such a long time.