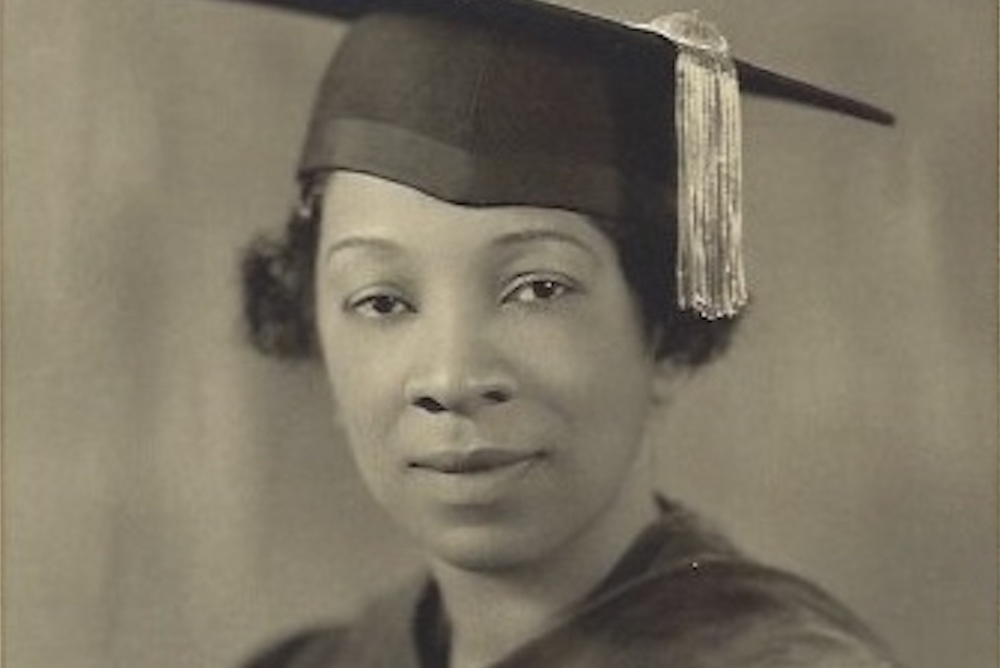 Marion Thompson Wright is best known as the first female African-American to earn a doctorate in history. Her 1940 dissertation, defended at Teachers College at Columbia University—The Education of Negroes in New Jersey, a history of segregated schools in the North—remains relevant today. Wright had a distinguished academic career at Howard University from 1940 until her death in 1962, serving as book review editor for the Journal of Negro Education and creating the university’s student advising program. In 1953, she helped draft a brief for the NAACP supporting the prosecution in Brown v. Board of Education, the U.S. Supreme Court decision that mandated school integration nationally, jump-starting the civil rights movement.

Behind those illustrious credits, however, Marion Thompson Wright had a deeply troubled life. All black Americans of her time suffered under Jim Crow; Wright also dealt with what the civil rights activist Pauli Murray called “Jane Crow,” or the limits placed on black women in a patriarchal society.

Most of her academic colleagues never knew it, but early in her studies, Wright had faced a heartrending decision: abandoning her husband and two children to pursue her career. Her acts as a teenage mother shadowed Wright for the rest of her life and ultimately led to her suicide. Wright’s struggles reflect the sacrifices that many lower-class black women of her place and time had to make if they hoped to follow a path to professional success.

Wright was born Marion Manola Thompson in East Orange, New Jersey, on September 13, 1902. Her parents were Moses B. Thompson, a laborer, and Minnie B. Holmes Thompson, a domestic, and she had three siblings. Sometime between 1910 and 1915, Moses Thompson disappeared.

Marion went to high school in Newark, New Jersey, and excelled, but then abruptly dropped out in her junior year to marry William Henry Moss of Montclair, New Jersey. The reason for the hasty marriage became apparent on January 2, 1919, when a daughter, Thelma Mae Moss, was born. Within six months, Marion was pregnant again, and she gave birth to a son, James Allen Moss, on March 27, 1920.

The burdens of parenting created tension in the young couple’s relationship, and the pair quarreled often about Marion’s ambitions. To catch up on her high school studies, Marion attended school full-time during the day and took classes at night at Drake’s College, a local business school. Alongside a heavy academic load, Thompson threw herself into high school activities, serving on the board of the Epilogue and the Acropolis, the student-run magazines, and joining the science club, glee club, and cheering squad.

The allure of school pushed her away from her family. In October 1921, as her father had done a decade earlier, she vanished from her family, never to return. One day in 1922, her husband spotted her in a crowd at Lincoln Park in Newark. William beseeched Marion to come back, but, as he claimed in his divorce suit against her, “She finally said she could not be bothered with the responsibility of children.”

William Moss didn’t know it then, but Marion Moss had dropped her married name. She graduated from high school near the top of her class in 1923 and was accepted with a full scholarship at Howard University in Washington, D.C. Howard did not accept married women or women with children, which was common practice at the time. So, Thompson reclaimed her maiden name, took three years off her age, and forsook all references to her husband and children when she enrolled there in the fall of 1923.

When William Moss learned that his wife had become a student at Howard, he sent her, as part of the divorce proceedings he had initiated, a registered letter asking her to return home and care for the children. Thompson wrote back that she was “willing and shall do all I can for the children,” but that coming back was “utterly impossible.” It would not be best, she explained, for the children to live in a home where “no affection or respect exists between the parents.” Any love that she felt toward William, Thompson added, “died long ago”—and if he did not understand that before, Thompson hoped it would be “clear to you now.”

On September 21, 1925, William Moss was granted an uncontested divorce from Marion Thompson and gained full custody of the children. He soon remarried. Thompson wrote in a letter dated around 1939 to her son James that she felt after the divorce that “everything was settled without my being in [the children’s] future … I then set up my goals and worked toward them.”

In the record of the divorce proceedings, Marion Thompson comes across as heartless and indifferent to her family—but leaving them to resume her studies, while harsh, had been an existential choice between domesticity and ambition. It was one that many other professional women, then and now, have also had to make. Thompson surveyed her surroundings and saw dim prospects for a woman with two children and no high school diploma; poorly paid and demeaning work as the servant of white people, a job her mother had endured, was the likely future. Thompson knew that school offered personal joy. Home did not.

Howard University represented the peak of black academic achievement and a pathway to success, and Washington, D.C., was home to the nation’s black political elite: professionals, politicians, and prosperous families who upheld a strict set of social mores. Young black undergraduate women were expected to be moral and ladylike above being feminist. Chastity was the litmus test for a young woman’s reputation and served as a class and cultural wedge between middle-class college women and their classmates from poorer black families.

When Thompson started at Howard, she tried to keep her past under wraps. She had been the “target of so many insulting proposals from men as to be nauseating,” she informed her son James as he entered adulthood. And if men knew her story, she worried that they would regard her as “sexually experienced and available.”

Thompson surveyed her surroundings and saw dim prospects for a woman with two children and no high school diploma; poorly paid and demeaning work as the servant of white people, a job her mother had endured, was the likely future. Thompson knew that school offered personal joy. Home did not.

She found a mentor in Lucy Diggs Slowe, Howard’s first Dean of Women. Slowe was part of the New Negro Womanhood that emphasized leadership in social affairs, voluntarism, club membership, activism toward universal suffrage, and the democratic promise of education for all black people. Under Slowe’s guidance, Thompson plunged into college life. By the autumn of her sophomore year, she had been elected to the Howard University Student Council and served as recording secretary for her class. As a junior, Thompson became president of the Women’s League at Howard, a newly formed club that lent support to the Howard football team and set up a loan fund for needy female students, among other projects. The same year, she was elected to Kappa Mu, Howard’s academic honor society, and joined Delta Sigma Theta, a black sorority that emphasized public service.

But Thompson always worried that people would find out about her past—and eventually, people did, with some mudslingers implying that both of her children were illegitimate. Instead of telling the world of her failed marriage, Thompson decided to “get along” by sticking to her ambitious goals and ignoring gossip and her sorrow. When the tattling escalated in 1927, Thompson told Slowe her secrets. Slowe asked to see Thompson’s marriage license and divorce decree. Then she told Thompson to say nothing further.

Marion Thompson graduated from Howard magna cum laude in 1927 and easily could have found employment as a school teacher in a black school anywhere in the United States. Slowe, who sought to open young educated women to broader prospects, had encouraged her to think bigger. Most college-educated black women became teachers, but it was a hard and lonely life. Black teachers were underpaid, worked in difficult conditions, had little or no contact with their white counterparts, and were often resented by poorer blacks. Few married. So, Thompson chose to remain at Howard, earning a Master’s degree in education in June 1928.

Thompson eventually moved on to Columbia University, attaining candidacy in 1931 for a doctorate in history. The same year, she returned to Newark and married Arthur Wright, a postal clerk, and in 1937, the Wrights purchased a home in middle-class Montclair, New Jersey. Wright transferred into the graduate program at Teachers College at Columbia, finished her doctorate, and rejoined Howard University’s education department in 1940.

Wright’s life in Washington could seem charmed. She lived in a comfortable apartment in Washington’s Adams Morgan district, decorated her home with porcelain figures of horses, and enjoyed embroidering her name on handkerchiefs. Wright treated herself to expensive diamond rings from a New Jersey jeweler and spent several months traveling in Europe in the mid-1950s. She joined academic organizations, gave public lectures, and worshipped at the Plymouth Congregational Church (now the Plymouth Congregational United Church of Christ), known for its abolitionist history in the district. She divorced Arthur Wright, though he continued to live in Montclair with her mother.

But under her polished, professional demeanor, Wright suffered from severe depression and anxiety. Her difficult decisions weighed on her. Now that she was a professor, her marital status shouldn’t have mattered, but if Mordecai Johnson, the autocratic, socially conservative president of Howard, ever learned that she had lied as an undergraduate, she would have been terminated immediately.

After achieving success, Wright had hoped to be more a part of her children’s lives. But Wright’s protector Lucy Diggs Slowe had died prematurely in 1937. So, to maintain her cover, Wright maintained distance from her children. As they matured and became successful adults, she kept them secret from even her closest friends. Theodora Daniels, with whom Wright traveled extensively, knew about the children but understood that she should never ask about them. Moments such as when an undergraduate rushed up to Wright in a hallway at Howard, exclaiming, “I did not know you were Jimmy’s mother!” created terror for her.

Her first attempts to reconcile with her children in the 1930s had been futile. Her children were understandably upset about her absence from their lives, but being more present, as they wanted, could have upended her career. The best policy, she told her son in a letter around 1939, was “for me to completely withdraw.” There were ways, she admonished her son James, that “you made it increasingly difficult for me to work with you, so for the time, I gave up.” What, she asked her son, would he have done in the same circumstances? Only in 1953, after her own dying mother urged her to reopen relations with the children, did Wright reach out to them. There were clandestine meetings over the years, but repairing the family remained impossible. On October 26, 1962, Marion Thompson Wright committed suicide by asphyxiating herself in her automobile.

Today, Wright is commemorated with a lecture in her name, held every February at Rutgers University-Newark. It is the most prestigious black studies celebration in New Jersey and one of the largest in the nation. In the 1980s, her children James and Thelma attended the event, and in 1989, the year before his death, James gave a stirring account of his mother’s role in the writing of black history. Today, visitors to the Marion Thompson Wright lecture can read a short bio of her on the program. As they do, they might reflect on the terrible sacrifices she made to create a better America.