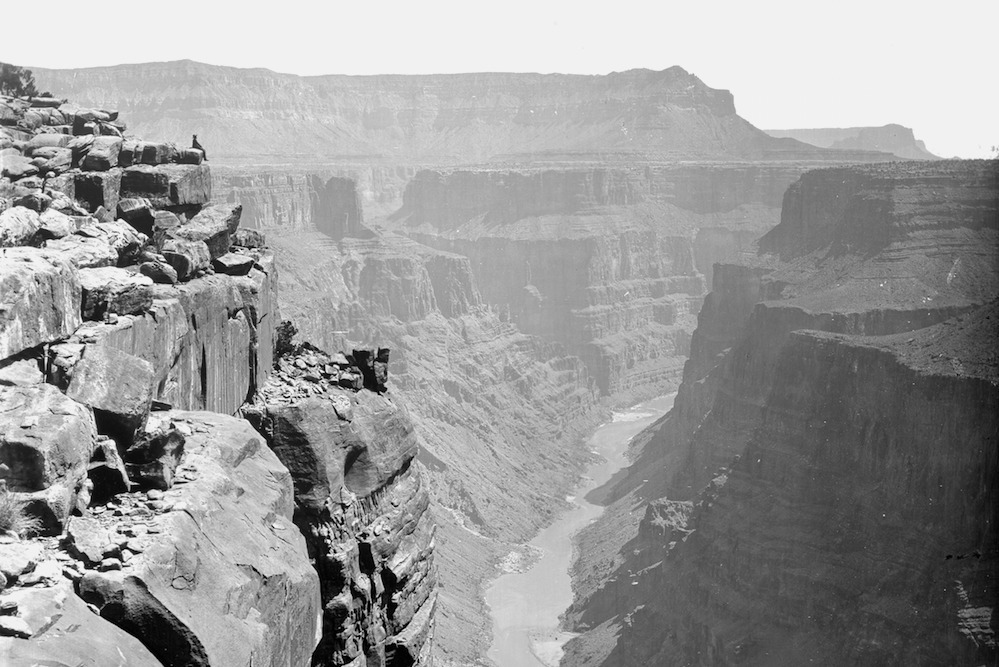 In May 1869, ten men climbed into four small, wooden rowboats to attempt what no one had dared before: descend the Colorado River through the unknown, frightening confines of the Grand Canyon. The leading explorer of the day, John C. Frémont, called it a suicide mission.

But no one could dissuade the expedition’s leader, scientist and Civil War hero John Wesley Powell, from exploring the last largely unexplored section of continental America, a 100-by-300-mile swathe of labyrinthian canyon land of the high Colorado Plateau—and finishing what Lewis and Clark had begun some seven decades earlier.

A largely self-taught geologist, Powell knew that the Canyon presented one of the greatest scientific opportunities of his generation. The canyons in the Colorado Plateau exposed wall faces more than a mile high, potentially revealing many millions of years in Earth history.

Powell had assembled his team from the toughest mountain men he could find. It was a good thing he did for they came up against conditions that few—if any—humans had encountered before. “We have an unknown distance yet to run,” Powell would famously write, “an unknown river to explore. What falls there are, we know not; what rocks beset the channel, we know not; what walls ride over the river, we know not. Ah, well! we may conjecture many things.” Powell knew less about what lay ahead than Neil Armstrong did when he went to the moon.

Only two weeks into the expedition on the Green River in Utah, a miscue caused the loss of one boat and one-third of their supplies in a ferocious stretch of whitewater. One team member quit after nearly drowning. But Powell had planned for this scenario, spreading supplies evenly among the three freight boats. 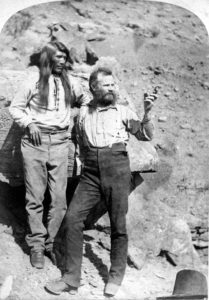 The whitewater and rock punished the men’s bodies and their boats, and rotted their clothes until they were nearly naked. Worst of all, the waves and pounding rains threatened their dwindling rations. Each time they strained their flour supplies through mosquito netting to remove the green mold, they lost more than they saved. Their robust 10 months of rations nearly petered out in just over two months. The expedition became a race to exit their rock-wall prison before starvation killed them. But if they moved too quickly—dispensing with time-consuming actions of scouting rapids and portaging the worst—then they risked catastrophe in the boulder-studded whitewater. The vise tightened.

In the heart of the Grand Canyon, the roar and spectacle of one rapid finally proved too much for three men, who decided to climb out of the canyon and trek some 75 miles across the desert to a remote Mormon settlement. The men could not be convinced to stay, so they shook hands with the others and departed.

The six remaining men negotiated a nightmarish series of rapids, then emerged from the canyon a little more than 24 hours after separating from the others. The trio who abandoned the river would not be seen again, their bodies and possessions never recovered.

The story of this daring expedition spread across a nation hungry for heroes and mythic stories. Simple bone and sinew, informed by courage, had overcome implacable rock and ferocious whitewater in a tale worthy of Homer. And Powell had completed all of this with only one arm, his right forearm lost to a Confederate minié ball at the Battle of Shiloh. The blood he had spilled to keep the Union together had only strengthened his resolve to work on behalf of the nation. When Powell set off into the unknown, he did not do it so much for his own personal glory but to help America fulfill its enormous possibilities. He believed that a nation that did not know itself—the course and contours of its geography—would not achieve greatness.

The six remaining men negotiated a nightmarish series of rapids, then emerged from the canyon a little more than 24 hours after separating from the others. The trio who abandoned the river would not be seen again, their bodies and possessions never recovered.

For that reason, Powell did not consider the expedition a success: The grueling conditions had destroyed their scientific instruments, data, and maps. Although he could have rested on his laurels, he mounted another attempt down the same river two years later to get the science right. Although less dramatic than his first, but still filled with hair-raising near misses, the second expedition yielded important data that formed the basis of an accurate map of the river and surrounding topography.

“Climbing the Grand Canyon” print from woodblock prepared by F.S. King; original artist Thomas Moran; print published in 1875 in Report of the Exploration of the Colorado River of the West and Its Tributaries. Explored in 1869, 1870, 1871, and 1872, under the direction of the Secretary of the Smithsonian Institution by John Wesley Powell. Courtesy of the Smithsonian Institution.

The indefatigable explorer then moved on to survey and map the Colorado Plateau. Eventually, he became the leading force behind the establishment of the United States Geological Survey—and helped make federal science a permanent part of the Washington bureaucracy. He introduced the scientific discipline of geomorphology, the study of how such forces as erosion and tectonic activity shape the Earth’s surface.

His work led Congress to fund the massive federal project of mapping the topography and geography of the entire United States. He created the Bureau of American Ethnography at the Smithsonian—and put together the first large-scale systematic study of native peoples in the world.

After his perilous journey in 1869, Powell wrote and lectured extensively about the West, bringing photographers and artists there. Before Zane Grey novels, John Ford Westerns, or Ansel Adams’ photography, Powell helped a nation begin to understand its Western lands. His work would prove instrumental in turning the Grand Canyon from a forbidding no-man’s-land into an American icon—a symbol of the nation’s exceptional nature.

That experience on the Colorado River in the Grand Canyon opened Powell’s eyes not only to how the Earth’s surface was under constant state of flux, but also to the fleeting nature of human’s presence on the planet. That world view came to inform his visionary ideas about how America should exploit the West’s resources. Powell became a forceful advocate for careful, sustainable development of the land and, particularly, water. Otherwise he believed the future would consist of shortages, environmental problems, endless litigation, and feuds over infrastructure and water—each one a threat to democratic society and the fabric of the Union.

Many decried his visionary words, believing that he stood between them and America’s shining future. Although the tide of antagonism and vitriol finally led him to retire from public life, he never deviated from his belief that America’s path to prosperity lay through sustainable development of the land—and he never stopped fighting for the republic he loved.

A generation after Powell’s death, the nation would pay a terrible price for ignoring his warnings when the Dustbowl—a result of severe drought and indiscriminate plowing of the prairie—displaced some 2.5 million Americans and set off one of the greatest migrations in U.S. history. Powell’s words contain particular resonance today as the world struggles with global climate change.