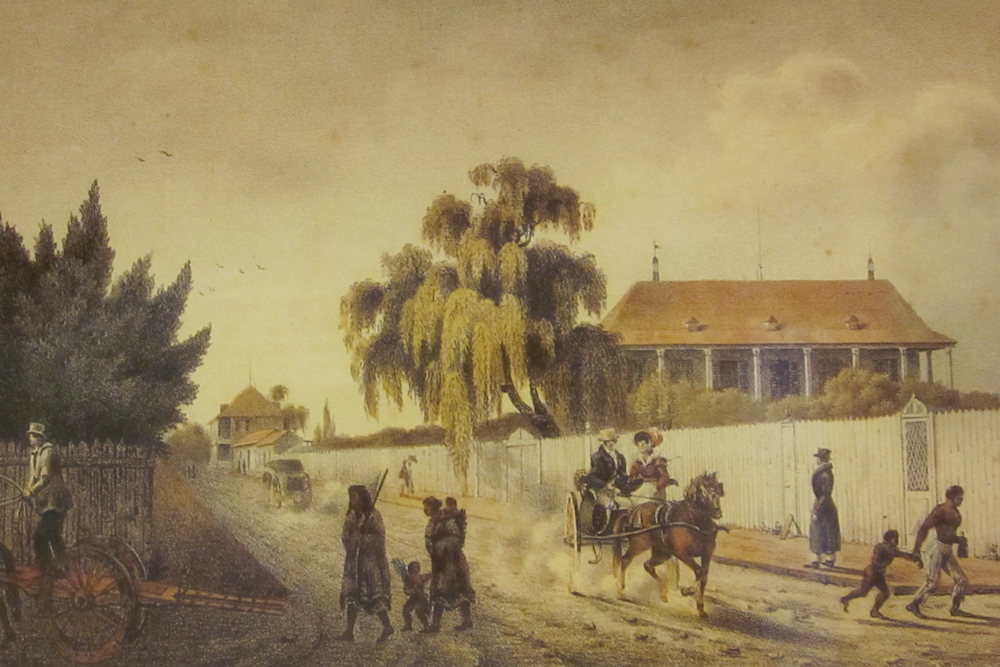 In the New Orleans pantheon of colorful personalities, Bernard Marigny is one of the caricatures: an arch-Creole with a sword in one hand and deck of cards in the other. His persona was said to be that of “swashbuckling gambler, duelist, and playboy.” High living and careless with money, his best-known but apocryphal trait was lighting his cigars with $100 bills. Less remarked upon, but far more significant, were his roles as real estate developer, politician, and slave holder.

Indeed, Marigny was all of these, as well as one of the guiding forces of the first years of American New Orleans. New Orleans has always loved the strong personalities who defy convention, cross boundaries, and disregard mainstream opinion, and Marigny was the archetype. Born of colonial aristocracy, enrobed in great wealth while just a teen, and armed with a boundless faith in his position and capabilities, Marigny was the first outsized personality of the American era and his imprint is still felt in New Orleans neighborhoods today.

Louisiana was founded as a French colony in 1699 and in 1718, the site of New Orleans was selected to be the territorial capital. New Orleans was the outlet for nearly all trade from the Mississippi Valley, and mountains of sugar, grain, and furs crossed its docks. Legitimate trade was well-supplemented by smuggling, an activity practiced high and low. French interest waxed and waned, and the costly and struggling colony was ceded to Spain in 1762.

Bernard Marigny was born in 1785 to a wealthy, high-ranking French garrison commander in the service of Spain. An ancestor in his Mandeville family had been ennobled as “de Marigny”, and so that name became his legal appellation. In 1799, at age 14, Marigny lost his father and inherited a considerable share of the family estate, then the greatest in the Louisiana colony. Marigny was sent to Pensacola, Florida, and to London for mercantile training, but he didn’t apply himself, and by 1802 he was back in New Orleans. 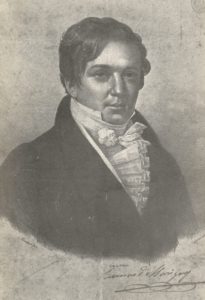 Napoleon Bonaparte, then leader of France, needed money to continue his long-running war with Britain. He ordered the cession of Louisiana from Spain to France, and gladly sold the entire territory to America in 1803. Marigny, just 18 years old at the time, hosted the French commissioner and served as his aide during the transition. Marriage to a prominent American-born woman, Mary Jones, cemented his ties with the territory’s new masters.

At the 1803 Louisiana Purchase, New Orleans was crowded into the original grid layout of the Vieux Carré, (“old square”), today’s French Quarter, with one small suburb, the Faubourg Marie, just upriver. Vacant property was scarce within the original city, and urban housing was costly for people of average means. In 1805, Bernard laid out a new suburb, or faubourg, of New Orleans, naturally naming it the Faubourg Marigny.

Here is where the legends kick in. Unsourced accounts, repeated endlessly in magazine and online articles, state as “accepted fact” that Bernard lost a fortune at cards and had to sell land to cover his losses. My research shows nothing of the kind. Bernard was rich at the founding of his faubourg, and he only got wealthier, reaching a net worth of $915,000 in 1839; in today’s money about $22 million. Although he probably gambled, any losses at the gaming table were minor compared to deficits from bad banking, national depression, and forces of nature.

The new faubourg occupied about 1,161 acres of land, just across from the eastern gates of New Orleans, and fronted on the Mississippi River. A narrow canal ran from the river to Bayou St. John, once part of the Native American portage between the river and Lake Pontchartrain. The first lots formed a triangular area bounded by the canal, the river, and the streets we know as Esplanade and St. Claude avenues.

Marigny’s engineer laid out streets that mated with their “mother” streets in the Vieux Carré, but bore names Marigny assigned, such as Greatmen, Casa Calvo, and the infamous Craps, named after the game Marigny was said to have imported from the English pastime hazard. Within two years, 68 percent of the lots were sold; Marigny held the notes on many of these mortgages. The old Marigny mansion towered over the collection of cottages that sprang up in the new suburb. Most of the new residents were working class, many operating businesses out of their homes.

Revolution in the French colony of Saint-Domingue (today’s Haiti) in 1809 washed a wave of refugees to New Orleans. Bernard created another suburb, New Marigny, to accommodate them, just northeast of his original faubourg. These refugees brought Caribbean architecture with them, including the “Creole cottages,” distinguished by four interlocking interior rooms and a roofline paralleling the street.

New Orleans has always loved the strong personalities who defy convention, cross boundaries, and disregard mainstream opinion, and Marigny was the archetype.

Marigny’s first wife died in 1808; the next year he married Anna Morales, the fiery daughter of a Spanish Florida grandee. Being of the still-prevailing aristocracy, Bernard naturally assumed the mantle of leadership of the French Creoles. Acclaimed for his eloquence in council, he took on many political roles, among them member of the Louisiana territorial legislature; president of the state senate; and delegate to the state constitutional conventions of 1812 and 1845. He also ran for governor twice but never reached that cherished goal. Most notably, he authored successful bills that ensured the validity of legal documents in the French language.

When British invaders approached in 1814, Marigny was president of the city’s Committee of Defense, marshaling resources for U.S. General Andrew Jackson. As he reported in his memoirs, it was his idea to spring Jean Lafitte’s pirates from jail to contribute their cannons to the meager American forces defending the city. Jackson was victorious, and Marigny reveled in his friendship with the general and later, president.

Marigny defined the role of wealthy bon vivant. He was a leader of revelry at the dance and early New Orleans Mardi Gras celebrations. A contemporary described him as the “glass of fashion, the mould of form, a mirror in which our young men dressed themselves.” Well-known for his directness of conversation, eating with his fingers, and singing in public, Marigny never tired of mentioning his friendships with Jackson, King Louis Phillipe of France, and other men of power. Legend holds that he also fought 15 duels. However, the Creole tradition was that the first draw of blood would end the contest, so it is doubtful that Marigny took the lives of most of his opponents. After his son Gustave was killed in a duel in 1830, Marigny turned against the practice.

The height of Marigny’s wealth and influence ran from about 1815-1839, with his apogee of political power in the 1820s as the political and cultural leader of the French Creoles. His wealth was founded upon land, which was the ultimate surety for the overlapping loans and mortgages on holdings that stretched across four parishes. In 1834 he created a new town, Mandeville, north of Lake Pontchartrain, and took prospective purchasers by steamboat to view the property.

Marigny was a backer of the Citizens Bank of Louisiana, whose mission was to increase credit available to planters. A large portion of his wealth was tied up in the bank’s bonds. In 1839, while Marigny was in France, visiting his old friend King Louis Phillipe, the bank’s bonds lost much of their value, and his fortune began its long decline. Levee breaks in 1849 and 1851 washed away most of his sugar crop. His last major asset, a brickyard, went bankrupt and was sold at auction in 1852. Marigny was given a sinecure as recorder of mortgages, which kept his extended family afloat.

The tide of politics seemed to have passed him by, but in 1855 Bernard Marigny had a final, if minor and bizarre, hurrah. The American, or Know Nothing party, dominated New Orleans in the late 1850s. This party was anti-immigrant and anti-Catholic in the extreme and often used violence to suppress voting and to control the city. Marigny, a French-Creole Catholic, threw in with the party and probably entertained fantasies of riding this ugly wave of repression back into office. This was not to be, and the Know Nothings governed New Orleans without him.

Bernard’s thoughts on Southern secession remain unknown, but I doubt he was enthusiastic. As a fan of Andrew Jackson, who forced South Carolina to acknowledge federal authority, it is unlikely that Bernard saw secession as anything but the disaster it was. His third son, Mandeville, was a colonel in the Confederate Army and served in the early battles in Virginia. But after New Orleans fell to federal forces in 1862, both father and son took the Union oath of allegiance, saving their property from confiscation.

Postwar New Orleans was a town greatly diminished by ruined trade and high taxes. In this grim setting, Marigny lived out his remaining years in a little house at the intersection of Frenchman and Royal streets, just steps from what is now the bustling Frenchman Street music scene.

Like his city, Marigny was quick in anger; quick in laughter; quick in love; unfazed by contradictions; and secure in his “exceptional” greatness. Even in his last years, Marigny retained his sense of singular nobility. When son Mandeville reproached him for sitting at a table on the sidewalk in his dressing gown, the patriarch replied that the light was better outside, and the gown was cashmere. Then added: “Finally, no matter what anyone thinks, I am Bernard de Marigny. Now you can go.”

The nobly bearded old man was fond of strolling around his faubourg and the Vieux Carré. He passed like a grey ghost down the sidewalks that had witnessed so much history in which he had played a part. On one such French Quarter stroll in February 1868, the 82-year-old Marigny fell from a stroke and died shortly thereafter.

Besides leaving New Orleans the iridescence of his personality, Marigny also set the pattern for individualistic development in his city. Many politicians and real estate moguls of later years envied his personal authority, vision, and freedom from most regulation.

The Faubourg Marigny slumbered as a working-class enclave well into the mid-20th century. and the old name fell into disuse. Over a period of three decades beginning in the 1970s, renovation efforts led by the gay community made the old suburb once again a desirable place. New Orleanians renewed their interest in the memory and lore of Bernard Marigny, with one of the pioneers in the rebirth of the old neighborhood portraying him in public celebrations. The name of Faubourg Marigny was revived in a way that echoed Marigny’s individuality and freedom of expression. Today “the Marigny” has become an internationally recognized historic district, and a pricey neighborhood.