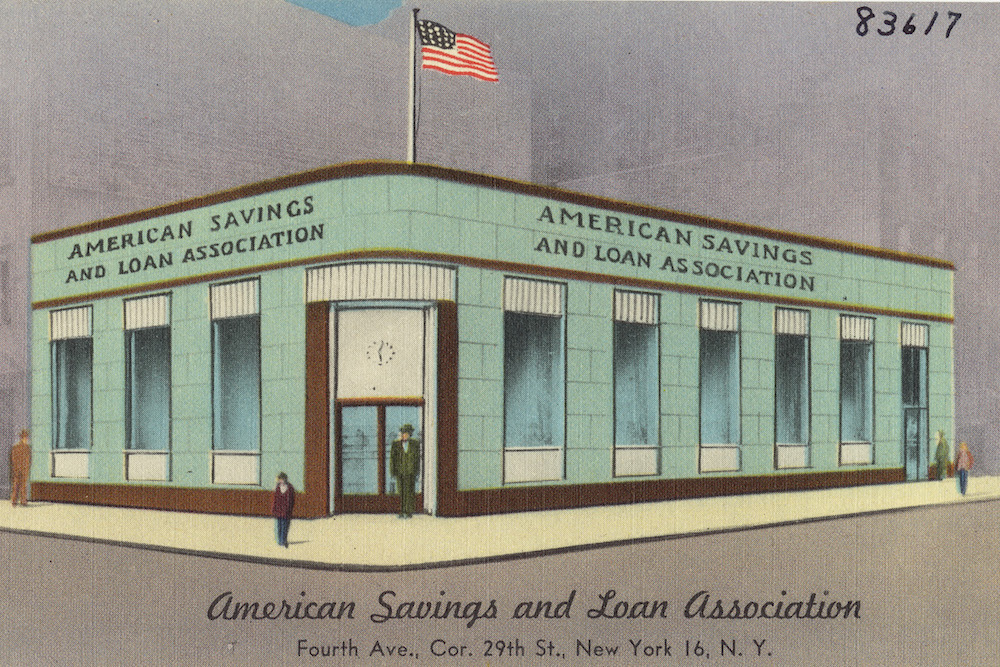 Postcard with an illustration of the American Savings and Loan Association building in New York City, circa 1930-45. Courtesy of Boston Public Library/Flickr.

In 1986, Citicorp vice chairman Hans H. Angermueller sat before Congress, complaining that federal red tape made a nightmare of buying a special type of bank that specialized in making home loans and was known as a “thrift” or “savings and loan”—or “S&L” for short.

“So why bother?” he asked lawmakers.

He was posturing. Citicorp, the nation’s largest banking holding company at the time, very much wanted to bother with those kinds of banks. Even as Angermueller complained, his colleagues a few blocks away were wrestling with oil billionaire Gordon Getty over the right to buy the second biggest S&L in the nation’s capital. The bank in question was an odd prize: It was on the brink of failing. Federal regulators wanted to sell the Washington, D.C., thrift for that very reason, hoping a deep pocketed buyer would spare the government the cost of having to close it and pay off depositors.

Thrift regulators had thousands of such sick banks across the country. These so-called zombie banks were insolvent and should have been shut years earlier. Instead the Reagan White House kept them open for political reasons, which meant their losses were growing. And these were losses taxpayers would eventually have to pay. Any chance to sell a zombie to avoid paying off depositors was worth taking because the fund that insured deposits at thrifts was itself insolvent—with so many thrifts underwater.

As desperately as the government wanted to sell the thrifts by the mid-80s, Angermueller, Getty, and executives at scores of other companies—from Sears to Ford Motor Company to insurance behemoths like American International Group Inc.—wanted to buy them. Sure, buyers had to agree to absorb some of the losses of the thrifts they were buying, thus reducing the government’s—and ultimately, taxpayers’—burden in paying depositors. But the buyers agreed to do this because they could use thrifts to create larger financial supermarkets in which banking, securities, and other financial products could be sold in one place. And so, ironically, the reason there was demand for zombie banks was that they contained a way to avoid bank regulations.

But to understand how the debacle of the savings and loan scandal (as it was eventually called) came to be, you have to go back to the Great Depression and then see how well-intentioned policies were overwritten—for all the wrong reasons. In the 1920s, Citicorp’s predecessor, National City Bank, had created a financial supermarket that was instrumental in causing the Crash of 1929, which started the Great Depression, when 10,000 banks collapsed. Sixty years later, buying a savings and loan and assuming some of its liabilities was the easiest way around the regulatory barriers erected in the 1930s, largely because of National City.

After 1929, Congress created a regulatory regime to end the self-dealing, conflicts of interest, and out-and-out fraud that led up to the crash, and to cope with the fallout afterwards. To dismantle the one-stop financial supermarkets that had sprung up in the 1920s, it separated commercial and investment banking. Congress also started the U.S. Securities and Exchange Commission to police publicly traded companies and the exchanges on which their shares were bought and sold. It capped the interest rates that commercial banks and thrifts could pay depositors, reasoning that competition for deposits in the 1920s led to dangerously high rates among institutions desperate to stay solvent.

But no change was more hotly debated or more lastingly significant than the creation of federal deposit insurance.

The essence of the deposit insurance debate was simple: President Herbert Hoover and smaller banks favored it as a way to calm depositors and thus stop the thousands of bank runs and subsequent failures that were plaguing the country. Incoming President Franklin Delano Roosevelt opposed it. He argued that while deposit insurance might end bank runs, it would do so by making depositors’ indifferent to whether the banks into which they put their money were run prudently or not. That, he saw, could lead banks to act irresponsibly and saddle taxpayers with enormous liability.

FDR finally agreed to federal deposit insurance but only in exchange for tighter oversight of banks to mitigate risks to taxpayers. It was a social contract: On behalf of the public, the government would provide banks with the safety net of deposit insurance. In exchange, the government, on the public’s behalf, would police banks to ensure they weren’t acting against the public’s interest. Two funds were created—one for thrifts (the Federal Savings and Loan Insurance Corporation) and another for commercial banks (the Federal Deposit Insurance Corporation).

FDR proved to be correct: Although insurance calmed depositors, it also made them indifferent to how their bank was run. Depositors’ indifference is an instance of what economists call “moral hazard,” a situation where someone receives the benefits of a financial action or decision but is shielded from any downside. Indifferent to risks, depositors were encouraged to take bigger and bigger ones. But the plan did accomplish its primary purpose: As soon as Congress passed federal deposit insurance, bank runs—and bank failures caused by runs—stopped.

Fast forward to the late 1970s and early 1980s, when oil prices and other economic shocks sent inflation soaring, and with it interest rates, which peaked at 21.5 percent in 1980 and hovered in the double digits for years. In response to savers who railed against the single-digit interest they could earn on deposits at commercial banks and thrifts, Congress lifted the cap on rates it had imposed in the 1930s.

This upended the 3-6-3 business model that thrifts had lived by for decades: Pay 3 percent on deposits, lend that money out as mortgages at 6 percent, and go play golf at 3 p.m. Those days were now over, and with it the future of specialty banks that focused solely on mortgage lending. 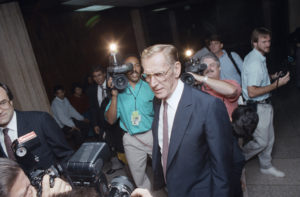 Thrifts, which were holding mortgages that earned single digits, suddenly had to pay double-digit interest rates on the deposits funding those assets. Those same depositors who demanded double-digit interest were not willing, however, to take out equally high-priced mortgages. The result: overnight, much of the thrift industry was caught in this interest rate squeeze and made insolvent, meaning their liabilities exceeded their assets. This was true even though the assets—the home loans—were performing. They simply weren’t performing well enough to pay for the double-digit rates thrifts had to pay for the liabilities—deposits—they needed to stay liquid. Commercial banks suffered too but far less because, unlike thrifts, they didn’t focus on only one product as thrifts did but made a range of loans of varying maturities. That blunted the squeeze they felt.

Thrifts fortunes sank in the early 1980s just as President Ronald Reagan and Vice President George H.W. Bush came to office promising less government and lower taxes. Through no fault of their own, the newly elected, free market duo was faced with thousands of sick institutions that should have been shut immediately. But that would have required a taxpayer bailout of $30 to $60 billion to make up the shortfall that the federal deposit insurance fund would have to pay to the closed banks’ depositors. And there was no question that all retail depositors would have to be paid as promised: To do otherwise would undermine trust in the U.S. government and the role its securities played as the benchmark of financial safety world over.

But, Reagan and Bush worried the public would interpret the bailout as a tax—which is was—and accuse them of breaking their campaign vows. So, with plenty of help from Democrats and other Republicans in Congress in whose districts the sick thrifts sat, the Reagan-Bush White House implemented a series of accounting tricks to create the illusion the thrifts were solvent so they could stay open.

This, the White House hoped, would buy the institutions time to grow out of their problem by diversifying into new businesses with varying returns: commercial real estate and credit cards, for example. To allow this diversification, Congress and the White House deregulated the thrift industry, allowing them to do three things commercial banks by law could not: jump state boundaries; sell any financial product they wanted, from insurance to stocks to mortgages; and be owned by any type of financial company or even any nonfinancial company, like a car manufacturer.

The problem was, the White House also cut the number of regulators keeping watch. Thrift executives, allowed to invest in pretty much anything without any watchful eyes, proceeded to make riskier and riskier investments, like in junk bonds, race horses, even brothels in Nevada. And why not? They ran insolvent institutions that they knew wouldn’t stay afloat forever, even with accounting tricks. Why not double down and hope for a big win? Instead bigger risks brought bigger losses—the classic slippery slope. In this way, the interest rate mismatch became a bad asset problem.

Just as FDR feared, deposit insurance bred moral hazard among depositors, who during the 1980s eagerly deposited money in thrifts paying the highest rates, which invariably were the sickest and most desperate. Depositors didn’t care. They knew they would get their money whether or not a bank fell into ruin. They just wanted those higher rates.

By the time the Reagan administration realized the cost of the problem had grown enormously, the 1988 presidential election loomed on the horizon, with Bush intending to make his own bid for the White House—famously promising no new taxes. They decided to continue to use bogus accounting to keep the thrift industry afloat, using the prospect of running a fully deregulated financial institution as a lure to find buyers for the biggest money-losing zombies. Congressional Democrats and Republicans, whose complicity made them equally vulnerable politically, went along with the plan.

Thrift executives, allowed to invest in pretty much anything without any watchful eyes, proceeded to make riskier and riskier investments, like in junk bonds, race horses, even brothels in Nevada. And why not? They ran insolvent institutions that they knew wouldn’t stay afloat forever, even with accounting tricks. Why not double down and hope for a big win?

That’s why Citibank, an oil billionaire, and scores of others spent the mid-1980s battling each other to buy a dog of a bank.

Bush won the election and immediately announced a multibillion-dollar bailout, hoping taxpayers would forget by the next election. The ensuing $500 billion bailout was 10 times more expensive than if the thrifts had been closed eight years earlier when they first became insolvent. The S&L bailout remains the costliest in U.S. history.

Bush lost reelection, but not because of the thrift fiasco. And the legacy of the thrift crisis? It demonstrated the dangers of deposit insurance when the grand bargain FDR struck is undone. It also began the deregulation of American’s financial services industry—but not for the right reasons. The Reagan-Bush White House and Democrats and Republicans in Congress deregulated not because it was the right policy but because they wanted to keep the problem under control until after elections. That decision, and the ones that followed, would eventually cause the crisis of 2007, but that’s another story.

The indifference that enabled this misuse of power reflects a disconnect between the public’s view of itself as a consumer—“My deposits are safe so I’m not concerned”—and as a taxpayer—“Why should my money pay for a bailout?” As an angry guest on Phil Donahue’s TV talk show said at the time, with no hint of irony, “Why can’t the government pay for these debts instead of taxpayers?” The audience erupted in cheers.