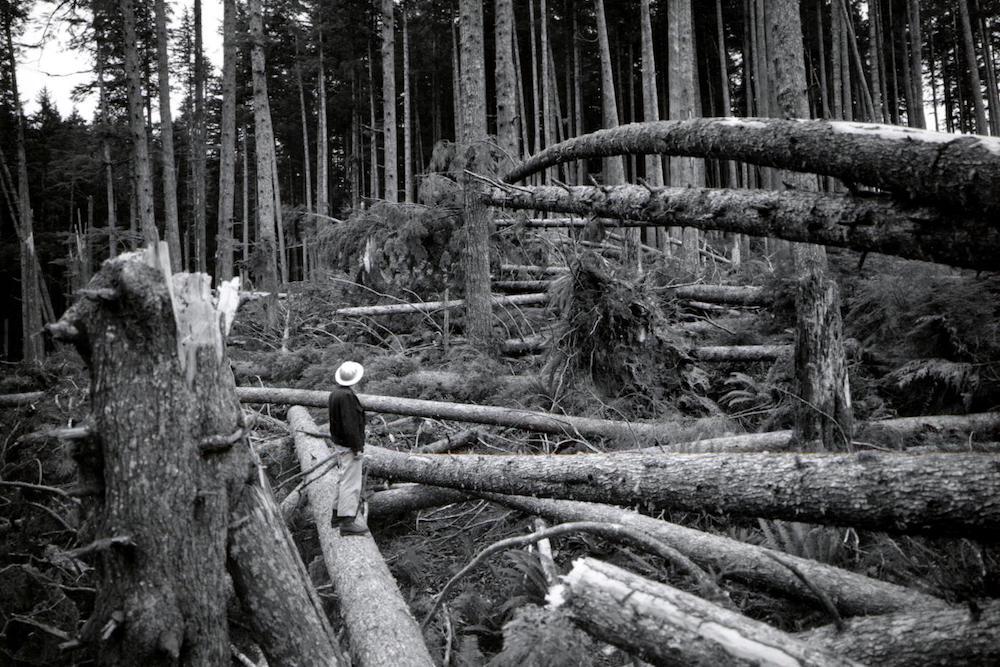 The Columbus Day Storm of 1962 was the largest, most violent windstorm in the recorded history of the West Coast. Starting on October 12, it swept from Northern California to southern British Columbia over the course of 24 hours, with winds gusting over 100 miles per hour. It killed dozens, injured hundreds more, and damaged or destroyed some 53,000 homes in western Oregon and western Washington.

Fifty years after the storm ripped through the Pacific Northwest, meteorologists still marvel at its might. “There has yet to be another tempest that even comes close to the furor of the Columbus Day Storm,” said Steve Pierce, president of the Oregon Chapter of the American Meteorological Society. This storm was so violent, and so unprecedented, that it changed not only the forests of the Northwest, but also the way the economy and the culture around them functions—and its effects continue to be felt today.

The Columbus Day Storm reshaped the Pacific Northwest timber industry, which had been the mainstay of the region’s economy since the mid-19th century. Blowing down vast swaths of trees, the storm prompted an explosion of roadbuilding to help loggers reach fallen timber, giving birth to a new log-export trade with Asia, and causing timberland owners to change the way they manage forests under the threat of natural disasters. These new forestry practices, in turn, inspired an environmental movement that remains a powerful counterforce in the region today.

The storm hit some of the mightiest conifer forests known to man: the softwood forests of the Pacific Northwest that cover roughly half of the land mass in Washington and Oregon. Douglas fir (Pseudotsuga menziesii) is the dominant species in the region. A heavy-limbed evergreen tree with a trunk that can reach diameters of 10 feet or more, it can tower higher than 200 feet. If left alone, a Douglas fir can live five centuries or more.

When American conservationist John Muir visited Puget Sound in 1888, he marveled at the ancient trees that pressed “forward to the water … coming down from the mountains far and near to offer themselves to the axe, making the place a perfect paradise for the lumberman.”
And indeed, the lumbermen came in droves. By 1910, the U.S. Bureau of Corporations reported, 63 percent of working people in Washington owed their jobs to the forestry industry, directly or indirectly, and the state had become the nation’s top timber producer. A few decades later, Oregon’s logging business would surpass Washington’s, but by 2017 Oregon and Washington still ranked first and second, respectively, in lumber production in the United States.

Over the years, the logger’s axe gave way to chain saws, and fallen timber that once made its way to sawmills over rivers began traveling on trains and logging trucks. Twenty years before the epic windstorm, only about 40 percent of the 200-year-and-older trees in Washington were still standing. By 1962, any old-growth trees that remained were mostly at hard to reach elevations above 2,000 feet.

The forested landscape was still vast, but it was interrupted by a creeping checkerboard of clear-cuts and lightly managed forests. On tens of thousands of acres, trees gave way to postwar, suburban sprawl—housing subdivisions, strip malls, and parking lots. In the meantime, private timber companies and state and federal agencies scrambled to meet an insatiable appetite for wood products, including trusses, beams, flooring, plywood, particleboard, pulp, and paper.

Even in such a somewhat-thinned landscape, the Columbus Day Storm packed a brutal punch. Hurricane-force winds chewed their way through more than half of the region’s remaining forests, tearing down enough wood to build a million homes—an estimated 15 billion board feet of timber (a board foot is the measure of the usable wood in a tree, equivalent to a piece of lumber one foot long, one foot wide, and one inch thick.)

As dawn broke on October 13, 1962 in Pacific Northwest timber country, locals began to get a sense of the storm’s toll. “I don’t suppose I’m going to be going hunting this year,” Glen Hawley, a forestry manager in southwest Washington, mused to his boss that morning, which was the opening day of deer hunting season. Hawley was right. He would be preoccupied by timber salvage operations for months. Hawley’s Kelso District typically yielded a harvest of 40 million board feet of timber per year, but over the next three years his crews would clear away nearly 22 times that amount.

Salvage operations needed to move quickly to ward off a crippling infestation of the Douglas-fir beetle, which would lay eggs in the dead timber. Those eggs would morph into young adult beetles, emerging in the spring of 1964 eager to devour standing timber, too. On October 15, timberland owners met in Portland to figure out how to get as much wood as possible off the ground over the next 18 months.

The other major threat was wildfire fueled by the downed timber, which was everywhere. Washington state forester Roy Friis described what it was like to navigate the forest floor. “A lot of times you were ten or twenty feet off the ground, walking on fallen trees and limbs. You could cruise all day without your feet touching the ground,” he said.

Men clearing the forests worked unencumbered by regulations to protect fish, wildlife, and water quality—those all came along in the ensuing decades. “The good ol’ boys went to the back room, had a couple of beers and decided what to do,” recalled Kenhelm Russell, a Washington state forester who chaired the October 15 meetings. Timber sales took place practically immediately. On the rain-soaked Siuslaw National Forest along the Oregon coast, the first sale was advertised just four days after the storm.

The hasty cleanup ignited a flurry of roadbuilding. The Weyerhaeuser Company, a private timber giant based in Washington state, estimated that as much as 70 percent of the three billion board feet of storm-damaged timber on its property could not be reached without new roads. In the Siuslaw National Forest, the network of logging roads grew by more than 35 percent.

All of this activity resulted in a timber glut that transformed the marketplace. The volume of timber blown over by the Columbus Day Storm far exceeded the capacity of mills in the Pacific Northwest and other domestic markets, so the industry turned to Japan, a country that needed wood to fuel its own growing, post-World War II economy, and which had ample mill capacity but scant timber supplies.

For Japan, the Columbus Day Storm was a perfect storm. Seemingly overnight, the 375 million board feet shipped from the Pacific Northwest to Japan in 1961 steadily rose to two billion board feet in 1968. By 1988, the figure was 3.5 billion board feet. This rapid growth in the log export market was controversial. Timber companies, longshoremen, and free trade boosters were thrilled, because logs sold in Asia commanded higher prices than those sold domestically. But small mill owners and conservationists decried the loss of raw material for local mills, and worried about preserving the old forestry culture of the region.

The Columbus Day Storm delivered a dramatic reminder that forestland owners’ harvest plans could be upended overnight by a mighty windstorm or wildfire—and as a result the practices of the timber industry were transformed. High-yield forestry emerged, designed to grow trees faster and boost the volume of wood per acre. With Weyerhaeuser paving the way, timberland owners grew tree seedlings in controlled orchard settings, keying on genetically superior seed stock. They began fertilizing the forest soil, thinning tree stands to promote vigorous growth, and spraying herbicides broadly to combat brush and unwanted trees, including alder.

By 1975, Weyerhaeuser’s high-yield forests in the Pacific Northwest were growing twice as much wood as unmanaged forests, and breathing new life into what had been a shrinking business. “The Columbus Day Storm jumpstarted the timber industry,” noted Bob Dick, a forester whose father, Malcolm Dick, helped establish Weyerhaeuser’s Japanese log export market. “It forced landowners to really start managing their lands.”

The Columbus Day Storm delivered a dramatic reminder that forestland owners’ harvest plans could be upended overnight by a mighty windstorm or wildfire—and as a result the practices of the timber industry were transformed.

But as high-yield forestry took hold, a newly ecological view of the region’s forests grew, too. Buoyed by federal laws such as the 1972 Clean Water Act and 1973 Endangered Species Act, conservation groups began working to save what remained of the Pacific Northwest’s old-growth forests. By the end of the 20th century, timber harvesting on federal land in the region had ground nearly to a halt, reducing regional timber harvests by some 50 percent.

The spate of roadbuilding for logging, spurred by the Columbus Day Storm, also brought environmental destruction. The roads, many carved out of hillsides at high elevations, served as conduits during rainstorms, delivering tons of sediment to rivers and streams, and smothering salmon spawning habitat critical to the recovery of depleted salmon runs. By the 1990s, public and private timberland owners were spending tens of millions of dollars to decommission orphaned and substandard roads, many of them the by-products of the Columbus Day Storm. The road removal budget for some timberland owners equaled what they spent on new, more fish-friendly roads.

Today in the Pacific Northwest two big outgrowths of the storm—high-yield forestry and old-growth environmentalism—share an uneasy truce in the face of climate change. Scientists predict that global warming will lead to more frequent and intense wildfires in the Pacific Northwest. The forests of the region have proven resilient in the past when confronted by severe weather. They will be tested again.