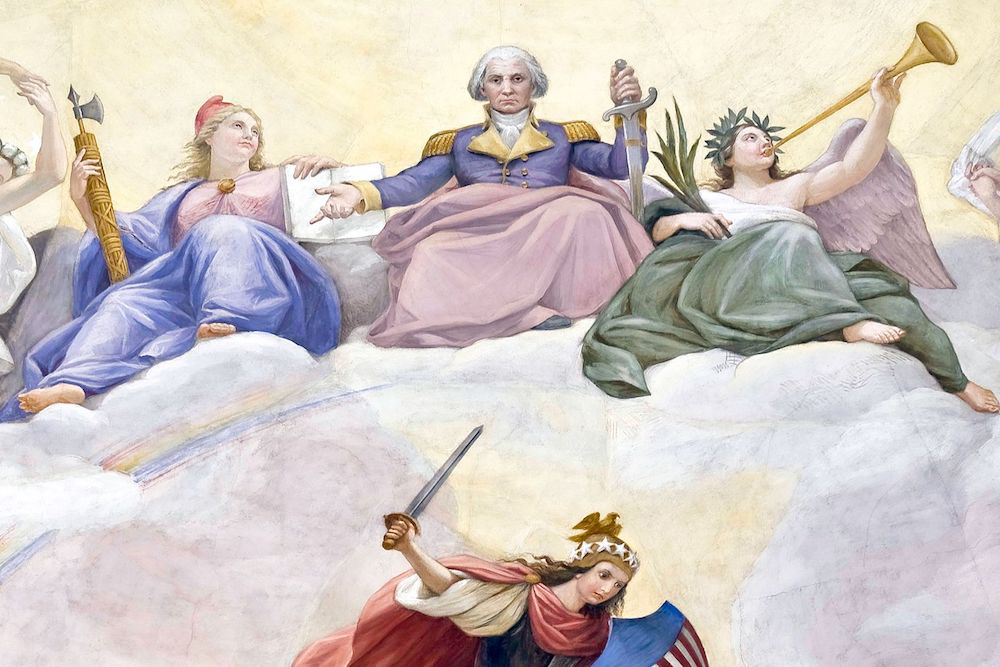 This detail of The Apotheosis of Washington, a fresco painted in the 19th century by Constantino Brumidi in the eye of the rotunda of the U.S. Capitol Building, depicts George Washington rising to the heavens, flanked by the Roman goddesses of liberty (left) and victory (right). Courtesy of Wikimedia Commons.

George Washington issued what might be considered the first executive order. To commemorate the end of a bloody Revolutionary War, Washington set aside the last Thursday of November as a day of thanksgiving and prayer. His 1789 Thanksgiving Proclamation was short, a mere 456 words, punctuated by references—“Almighty God,” “the Lord and Ruler of Nations,” “the great and glorious Being,” “the beneficent Author of all the good that was, that is, or that will be”—to a Supreme Being.

Pointing to sources like the proclamation, today’s religious leaders often count Washington as one of their own. The late Tim LaHaye, whose Left Behind series sold over 11 million copies, cast Washington as a “devout believer in Jesus Christ” who had “accepted Him as His Lord and Savior.” David Barton, founder of WallBuilders, an evangelical Christian advocacy organization, and the former vice chairman of Texas’s Republican Party, pictured a reverent Washington kneeling in prayer at Valley Forge on the cover of his book, America’s Godly Heritage. And politicians look to texts like Washington’s proclamation as proof that America was founded as a Christian nation. All doubters need to do, according to Sarah Palin, is “go back to what our founders and our founding documents meant.”

But what did Washington’s talk of this “glorious Being” really mean at the time? Are these references proof that Washington would, in LaHaye’s words, “freely identify with the Bible-believing branch of evangelical Christianity?” Or do they mean something else—something that would have been clear to Washington’s audience in 1789—but which eludes us today?

To find out, research psychologist Eli Gottlieb and I conducted a study in which we asked people with varied levels of historical knowledge and religious commitment to read Washington’s proclamation and tell us what they thought. At one end of the spectrum were members of the clergy; at the other were agnostic and atheist scientists. We also questioned professional historians, religious and nonreligious alike.

Clergy and scientists agreed that Washington was deeply pious. Where they parted ways was about whether his piety should be applauded—or denounced. A Methodist minister found support in Washington for the claim that the United States was founded on a “general Christian faith” and that “religion and spirituality played a significant role” in American life, more so than people are willing to admit today.

For their part, scientists chaffed at Washington’s “violation of church and state.” A biologist compared the president to a “country preacher” who arrogantly assumed “that everybody believed the same thing.”

And the historians? They reacted so differently that it seemed as if they had read a different document entirely.

Regardless of their religious leanings, historians focused less on what was in Washington’s address than what wasn’t. One historian remarked that the proclamation would “depress Pat Robertson,” the evangelical media mogul and chairman of TV’s Christian Broadcasting Network, who would fume at the fact that the proclamation made “no mention of Jesus Christ.” In lieu of recognizable markers of Christian piety—Jesus, Son of God, the cross, the blood of salvation, the Trinity, eternal life, the Resurrection—one finds airy and nondescript abstractions like “great and glorious Being” or “the Lord and Ruler of Nations.”

Historians were not deaf to Washington’s religious references. While the clergy and the scientists saw them as evidence of Washington’s devotion, the historians stressed the president’s precision in crafting a vocabulary that would unite the dizzying array of Protestant denominations in post-revolutionary America without alienating the small but important groups of Catholics, Jews, and freethinkers dotting the American landscape. It was precisely because he understood that Americans did not believe the same thing that Washington was scrupulous in choosing words that would be acceptable to a wide spectrum of religious groups.

In his own time, Washington’s reluctance to show his doctrinal cards dismayed his Christian co-religionists. Members of the first Presbytery of the Eastward (comprised of Presbyterian churches in Massachusetts and New Hampshire) complained to the president that the Constitution failed to mention the cardinal tenets of Christian faith: “We should not have been alone in rejoicing to have seen some explicit acknowledgement of the only true God and Jesus Christ.” Washington dodged the criticism by assuring the Presbyterians that the “path of true piety is so plain as to require but little political direction.”

Similarly, a week before his 1789 proclamation, Washington responded to a letter from Reverend Samuel Langdon, the president of Harvard College from 1774-1780. Langdon had implored Washington to “let all men know that you are not ashamed to be a disciple of the Lord Jesus Christ.” Once again, instead of affirming Christian tenets, Washington wrote back offering thanks to the generic “Author of the Universe.”

Even historians who have spent a lifetime studying Washington find his religious beliefs difficult to pin down. (John Adams once remarked that Washington possessed the “gift of silence.”) According to historian John Fea, himself an evangelical Christian, Washington’s Christianity took a back seat to his republicanism. Washington believed that personal interests and commitments of faith should be, as Fea put it, secondary to the “greater good of the nation.”

The last state to ratify the Constitution was Rhode Island. Only after they had done so did Washington agree to visit the state. Arriving in Newport on August 17, 1790, Washington listened to the town’s notables offer greetings, among them a representative from Yeshuat Israel, Newport’s Hebrew congregation. Moses Seixas thanked Washington for “generously affording” the “immunities of Citizenship” to a people “deprived as we heretofore have been of the invaluable rights of free Citizens.”

Reverend Samuel Langdon, the president of Harvard College from 1774-1780, had implored Washington to “let all men know that you are not ashamed to be a disciple of the Lord Jesus Christ.” Once again, instead of affirming Christian tenets, Washington wrote back offering thanks to the generic “Author of the Universe.”

Moved by these words, Washington responded four days later by making clear to the members of Yeshuat Israel that citizenship in this new country was not a matter of “generosity” or the “indulgence of one class of people” by another. America was not Europe, where tolerance of religious minorities, where it occurred, was an act of noblesse oblige. In the United States, Washington explained, “all possess alike liberty of conscience and the immunities of citizenship.”

Today, George Washington has been conscripted into the culture wars over the religious underpinnings of this country. The stakes are high. As one prominent theologian put it, if Washington can be shown to be an “orthodox Trinity-affirming believer in Jesus Christ” then “Christianity today is not an interloper in the public square” but can be mobilized to counter “the secular assault against the historic values and beliefs of America.” Those who summon the first president to the contemporary battlefield must pay a price: They must scrub Washington of the ambiguity, prudence, nuance, tact, and caution that so defined his character.

In the rare moments when Washington was forthcoming about religion, he expressed fear about using faith as a wedge to separate one American from another. He understood how religious disputes tear at civic union. “Of all the animosities which have existed among mankind,” Washington wrote Sir Edward Newenham in the midst of the bloodletting between Ireland’s Protestants and Catholics, “those which are caused by a difference of sentiments in religion appear to be the most inveterate and distressing.”

Washington dreamed of a nation, as he wrote to Newport’s Hebrew Congregation, that gives “bigotry no sanction … persecution no assistance.” What makes Americans American, he believed, is not the direction they turn to in prayer. Rather, it is the respect they owe fellow citizens who choose to turn in a different direction—or in no direction at all.