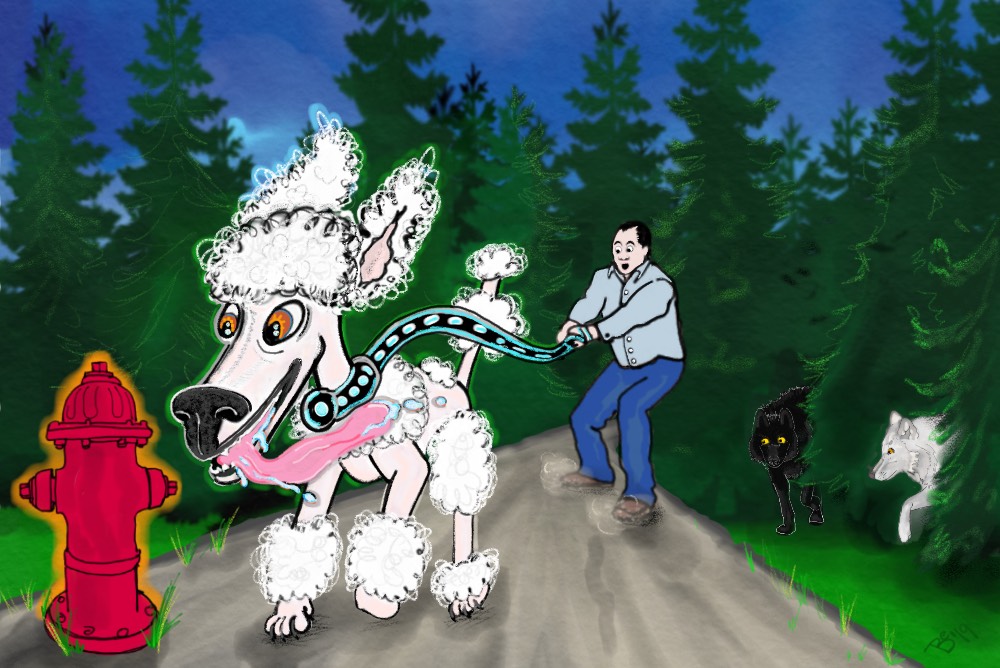 Traffic is slow as I work my way down 28th Street in Boulder, Colorado. In the car edging ahead of me, I can see the outline of a bushy-haired human in the driver’s seat and the two pricked ears of a dog in the passenger seat. Waiting for a red light, I watch the driver turn to the dog and make a remark. I smile to myself and turn to Bella, who is splayed out across the back seat. “Isn’t that sweet?” As the light turns green and we start moving, I add, “I’m going to stop for coffee—and you can get your biscuit.”

This dog-centric commute is a familiar sight where I live. And it isn’t just dogs in cars. Dogs are everywhere—brushing past me in the aisle of McGuckin’s Hardware; watching me from under the sidewalk tables of the coffee shop; running up to me on the hiking trail with wagging tail, sniffing my hand, and leaning against my leg while I provide a back rub. Luckily, I love them.

We seem to be in a “Dog Moment,” and at an apex in the history of humans keeping dogs as pets. Dogs have personal stylists and social media accounts with millions of followers. They are eating vegan, and paleo, and keto, wearing smart collars that are synced with our smart watches and our smart phones, and getting acupuncture and CBD tinctures for their aches and pains. Nearly everyone seems to have an emotional support dog. In San Francisco and Seattle, there are now more dogs than children.

According to a popular narrative being floated by the media and discussed within academic circles, humans have entered a new and unprecedented phase in our relationship with dogs. We have domesticated dogs to such a profound degree that they are no longer really dogs, but quasi-humans—they are fully integrated members of human families, with all the needs and desires and thoughts of small, furry people. We are treating dogs as we would like to be treated.

Ironically, perhaps the extreme humanization of dogs will finally prod us to see that dogs are not, nor do they want to be, furry versions of us. Although dogs live in relationships with humans, they are individuals in their own drama, not just ornamentation in ours.

This narrative, however compelling, goes wrong in important ways. The “humanization of dogs” narrative misrepresents the evolution of dog-human relationships by suggesting that our current dog-human situation is radically different from anything in the 15,000-odd years of the dog-human past. It also oversimplifies the story of dog identity and fails to account for the variety of ways in which dogs live in and around humans. Perhaps most importantly, it shapes (and maybe misshapes) how we understand our ethical responsibilities toward companion dogs. Emphasizing the “humanness” of dogs may reinforce the idea that we have strong obligations to treat them with kindness and provide them with a good life; yet raises the question of whether we are obscuring the “dogness” of our canine companions.

Let’s start with the first issue: Is something different in the way humans are now living with dogs? Yes, dogs now have smart collars and gluten-free dog food. But these changes are minor compared to what has remained constant: The fact of humans and dogs living alongside each other and the remarkable success of the dog as a species. While many of Earth’s other creatures are in sharp decline, the global population of Canis familiaris continues to expand. Dogs inhabit nearly every geographic region around the world.

Dogs and humans have long had a companionable relationship—or at least this is the best guess of archaeologists, who infer it from fossil evidence. There is a sense among scholars that the wolf ancestors of dogs entered close association with humans willingly, as did humans with wolves. Ethologist Konrad Lorenz, for example, wrote, “To me it is a strangely appealing and even elevating thought that the age-old covenant between man and dog was ‘signed’ voluntarily and without obligation by each of the contracting parties.”

But the covenant should not be understood as an evolutionary “agreement” that being fully integrated into a human home and family and outfitted with a smart collar is the dogs’ ultimate telos. Humans and dogs have co-evolved in close, mutualistic relationships because it has been, on the whole, beneficial for both species.

This is where the story of the modern dog starts to get complicated and the second issue inherent in the “humanization of dogs” narrative becomes apparent. How “humanized” is the life of a typical dog?

Not all dogs—not even most dogs—live like the pet dogs of Boulder, Colorado. Nor would they necessarily want to. Roughly a billion dogs currently inhabit planet Earth, and between 75-85 percent of these are “free-ranging,” a category that includes feral, owned-but-free-roaming, street, village, and stray dogs. While nearly all free-ranging dogs live in loose association with humans, either being deliberately fed or, more frequently, scavenging for garbage and waste within and along the edges of human settlements, a relatively small percentage of the world’s dogs live as pets within human homes.

This revelation brings us to the third question: What do dogs want and need?

Do they want to be our pets? And do those dogs living as pets want to be treated like furry humans? Could it be that dogs living in loose association with humans enjoy more freedom and have more interesting lives than our intensively homed pets? If we begin to look more closely, the life of the pet dog at home may emerge as one with a unique set of challenges.

This will seem, at first blush, totally counterintuitive. Don’t pets have it easy? All they have to do, after all, is give us their undying love and loyalty, and in return we bring them into our temperature-controlled homes, provide them Posturepedic dog beds, feed them machine-extruded kibble, and buy them squeaky toys and tartan sweaters. In the best-case scenario, pet dogs have consistent access to good food, exercise, and veterinary care. But what they may gain in these areas of care and feeding, they may pay for with sacrifices in other realms, such as the increased psychological costs of under stimulation, boredom, and frustration.

Many pet dogs rely on their owners for access to food, water, social companionship, the outside world, and even the opportunity to relieve themselves. They have no control over their environment, little opportunity to make choices, and often few chances to engage in natural, species-specific behaviors. They cannot work to procure food and find shelter, nor can they choose mates, rear young, or engage in the complex social dynamics of pack-living. As any “responsible” dog owner knows all too well, it requires hard work and a lot of patience to create a “good” dog, because homed dogs must be painstakingly taught to constrain their natural desires, to not be dogs: They must be trained to wear a collar and walk nicely on a leash, not to chase prey, not to roll in dead stuff or poop, not to bark at intruders wearing UPS uniforms, and not to roam the neighborhood in search of a nice-smelling partner.

It is precisely these skills of self-control that are necessary for dogs to live successfully within human environments, that make us humans have specific ethical responsibilities to our dogs. In a sense, all those “good dog” behaviors are another paragraph in the covenant between humans and dogs, and just the fact that dogs must modify their behavior for us means that their very dogness remains an important part of our relationship.

To understand what our obligations may be, we can work to understand how dogs experience the world, and become fluent in “Dog” by observing our dogs as they interact with other dogs and people. Dog owners can try to see their dog as an ethologist might—as an animal in her “wild” habitat—looking to understand what kinds of sensory stimuli are most salient, which might be aversive, and what kinds of behavior a given dog is highly motivated to perform.

For example, unlike humans, who are by and large visual creatures, dogs “see” the world through their nose. Dog noses are much more prominent than human noses, and the olfactory center of the canine brain is proportionately larger—so more of the brain is dedicated to processing olfactory information. A dog’s sense of smell is approximately 1,000 times more sensitive than ours. Understanding that dogs are “nosed animals,” a term introduced by canine scientist Alexandra Horowitz, we can give our dogs ample opportunity to sniff and give them access to things that will smell interesting to them (like the urine of other dogs). One study of off-leash dogs found that they spent about one-third of their time sniffing, so this is a nice goal: For a 30-minute walk with a dog, give at least 10 minutes of pure sniffing time, without tugging on a leash to hurry him or her along.

Similarly, we need to check our human instincts at enforcing human standards on dogs. For instance, if you spend any time in a dog park you will see people constantly interfering with their dog’s interactions—such as breaking up a rough-and-tumble play bout or scolding a dog for sniffing another dog’s butt or sticking a tongue on a fresh spot of pee—all perfectly natural dog behaviors. Sometimes the constraints we place are excessive, and often we can safely allow our dogs to just be dogs.

Perhaps, in the end, we are not in a new dog world, but rather we have reached an inflection point in our collective thinking about dogs. Perhaps our “Dog Moment” is a shift in human perspective about who dogs are. Ironically, perhaps the extreme humanization of dogs will finally prod us to see that dogs are not, nor do they want to be, furry versions of us. Although dogs live in relationships with humans, they are individuals in their own drama, not just ornamentation in ours. This isn’t a shift in who dogs are or how dogs interact with us; it is simply a shift in our own perspective so that we can pay more attention to dogs as dogs.