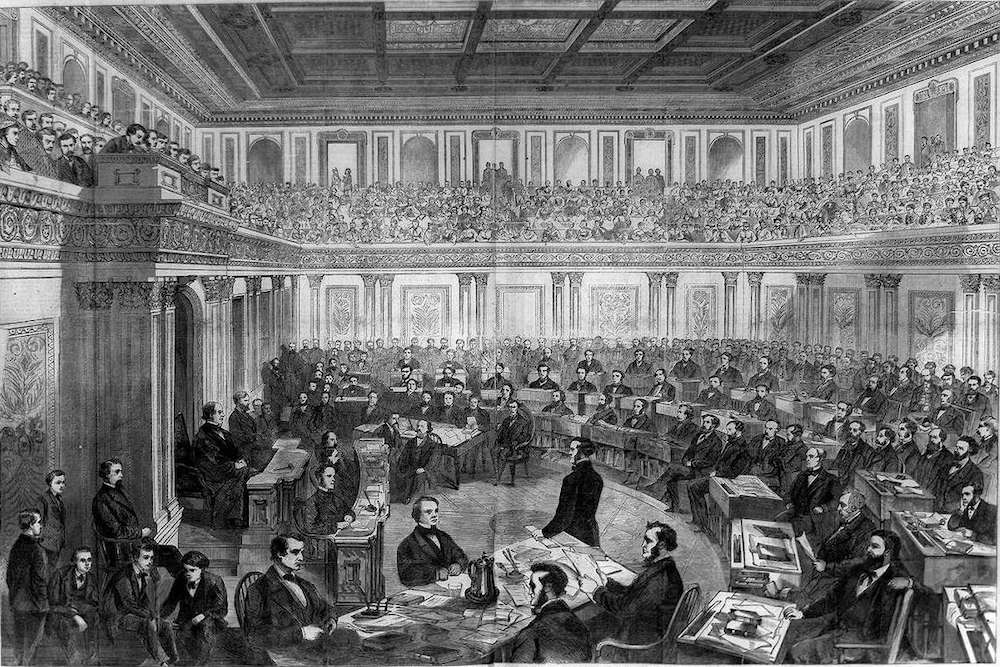 President Andrew Johnson’s impeachment trial in the Senate. The illustration, created by Theodore R. Davis, was published in Harper’s Weekly in April 1868. Courtesy of Wikimedia Commons.

In light of sharp disagreements about whether House Democrats should impeach President Donald Trump, it is worth noting that, by their very nature, impeachment efforts have always stirred controversy, and surely none more so than the first one, which finally resulted in President Andrew Johnson retaining his office by a single vote in 1868. Revisiting that first impeachment and the conflicting narratives that grew out of it can provide a clearer sense, both of the fundamentally political nature of the process and of the critical importance of historical context in assessing the likely consequences of removing any president from office.

The earlier of the narratives, which emerged not long after the episode itself and proved remarkably tenacious, has left many Americans today still dubious, not only of the legitimacy of the move against Johnson, but of the efficacy of the entire impeachment process. The more recent vision of what transpired in 1868 holds that, not only was Johnson’s impeachment justified, but if successful, it could have led to sweeping political advances for the recently freed slaves at a critical juncture in the nation’s racial history. Accordingly, this view offers a more optimistic perspective of what might be accomplished through impeachment.

Certainly, the older, widely prevalent historical impression of the first impeachment did little to inspire further attempts. This enduring—and ultimately distorted—narrative presented President Johnson as a man of humble origins and unyielding conviction, struggling to preserve the constitutional powers and prerogatives of an office thrust on him by the assassination of Abraham Lincoln. Johnson’s plan for returning the departed states to the Union differed but little from what Lincoln initially envisioned. Yet, he soon ran afoul of a self-righteous and vindictive Radical Republican minority in Congress, hell-bent on removing any encumbrance, presidential or otherwise, to their efforts to permanently enfranchise the freedmen at the political expense of their former owners.

According to this narrative, in opposing the Radicals’ agenda, Johnson acted strictly out of constitutional concerns, rather than pure racial animus on his part. Nevertheless, undeterred by constitutional scruples of their own, the Radicals launched a highly questionable impeachment effort in February 1868. Their case was based almost entirely on his refusal to abide by a hastily conjured, flagrantly unconstitutional statute requiring him to gain Senate approval before firing a member of his own cabinet, particularly, in this case, their fellow Radical, Secretary of War Edwin M. Stanton. When the Radicals came up a single vote short of conviction in the Senate, they had succeeded only in intensifying sectional animosity, while seriously damaging their own credibility and undermining their campaign to permanently empower the formerly enslaved black masses in the South. 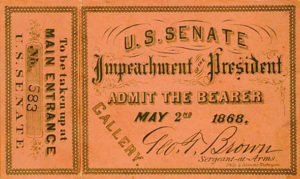 A major problem with this narrative was that it effectively gave Johnson a pass for his racism and obstructionism while making severe criticism of the motives and methods of the Radicals the centerpiece of a long-lived and deeply disillusioning perception of the entire Reconstruction effort. Throughout the country, whites who were tired of the seemingly futile struggle for black uplift and eager for national reconciliation rushed to embrace a near-epic indictment of the Radicals as reckless and wrong-headed in their attempts to remake the Southern racial order. This portrayal remained a fixture in college history texts well into the 1960s and was even reinforced by John F. Kennedy in his 1957 book, Profiles in Courage, where he paid tribute to U.S. Senator Edmund Ross of Kansas, a Republican so revulsed by the “unfairness” of the impeachment effort that he cast the deciding vote for Johnson’s acquittal.

The civil rights movement ultimately spurred a number of historians to begin a long overdue reappraisal of the actual realities of Reconstruction, which shed more light on Johnson’s racism while doing greater justice to the Radicals as, by and large, the only white Americans of their era who were sincerely committed to assuring black Americans of full political participation in a “fair, equal, and just republic.”

Yet it remains to be seen, even today, whether the earlier, thoroughly sordid impression of Johnson’s impeachment has been so indelibly inscribed in our national historical memory that any subsequent such attempt, however justified, is still likely to meet with some degree of knee-jerk skepticism. Historian C. Vann Woodward’s fear that this lingering impression might sour Americans on the idea of impeaching Richard Nixon in 1974 led him to warn that “the abuse of a constitutionally granted power is no argument for its abandonment, especially on the basis of one precedent.”

Nixon’s resignation obviated the need for his impeachment. But the blatant partisanship and outright meanness of Bill Clinton’s impeachers, whose endeavors subsequently led to their own comeuppance rather than his, hardly made the process seem any more palatable or politically astute the second time around.

Today, however, the steadily intensifying debate over whether the House of Representatives should have a third go at impeachment has led to further scrutiny of the case against Andrew Johnson by historians who readily affirm the righteousness of Radical efforts to unseat a president so bitterly intent on denying political equality to black Americans.

Of Johnson’s intense racism there can be no doubt, for he left no room for any, either in his assertions that “this is a country for white men,” or in his unvarnished attempts to protect white supremacy in the Southern states by vetoing the Civil Rights Act of 1866 and a measure extending the term of the Freedmen’s Bureau, not to mention his active efforts to discourage ratification of the 14th Amendment.

This is why renewed attention to the first impeachment has led some distinguished commentators to suggest the Radicals genuinely believed that unseating Johnson would lead to substantial improvements in the lives of many thousands of former slaves. Historian Annette Gordon-Reed has recently cast the 1868 conflict as “a fight over the future direction of the United States,” while historian Brenda Wineapple sees it as a genuine attempt “to restore faith in America’s ideals.” The central issue for both is how Johnson’s ouster could have furthered the cause of black political equality. It is hard to quarrel with Gordon-Reed’s carefully phrased suggestion that replacing the incorrigibly racist Johnson with the staunch Radical Benjamin Wade (who, as president pro tempore of the Senate, stood next in the line of succession) “might have altered the course of American history.” But the key word here is “might.”

Even if the Radicals were correct in sizing up Andrew Johnson as unalterably opposed to their most assuredly worthy aims, it does not follow that they were necessarily realistic in their promises of what might be accomplished simply by removing a president, even one so obstructionist as Johnson. Even if Wade had replaced Johnson, he could hardly have counted on the full backing of his own party, nor could he have reasonably expected to hold an office bestowed on him in late May 1868 any longer than the inauguration of his successor the following March. In fact, the final Senate vote for acquittal quite possibly amounted to more of a rejection of Wade than a vindication of Johnson. Historian Eric Foner has suggested that concerns about Wade’s pro-labor sentiments and his support for expanding the money supply may have led seven of his more conservative Republican colleagues to vote against elevating him to the White House and choose simply to bide their time until the more moderate and definitely more popular war hero, Ulysses S. Grant, could be installed as the party’s standard bearer in that November’s presidential election.

This portrayal remained a fixture in college history texts well into the 1960s and was even reinforced by John F. Kennedy in his 1957 book, Profiles in Courage, where he paid tribute to U.S. Senator Edmund Ross of Kansas, a Republican so revulsed by the “unfairness” of the impeachment effort that he cast the deciding vote for Johnson’s acquittal.

In this respect, the stance of those Republicans is not unlike that of today’s centrist Democrats, who feel it more prudent to leave the ouster of Trump to the voters in 2020. Nor, for that manner, do the Radicals of that era seem entirely different from the liberal Democrats of 2019, who also clamor for impeachment with no certainty of the support of the rest of their own party for that position, much less for the ambitious social and economic reforms they envision for the future.

We may reasonably assume that, as president, Benjamin Wade would have used his bully pulpit to preach the gospel of black suffrage at the top of his lungs, but that doesn’t mean he would have exactly expected a chorus of “Amens!” from anywhere other than his own Radical corner. Although we know that Northern white support for protecting the civil rights of black Americans at some level was more common during Reconstruction than we once believed, for too many of these whites, black voting was still a commitment too far, regardless of who was president in 1868.

Frederick Douglass may well have believed in 1868 that Johnson’s impeachment “will mean the Negro’s right to vote,” but at that point, black Americans enjoyed that right in only six Northern states accounting for less than 10 percent of the Northern black population. A few months after Douglass’s pronouncement, the Republican platform on which Grant was nominated for president declared that, while “equal suffrage to all loyal men of the South (black and white) … must be maintained,” in the rest of the country, the decision on black voting “properly belong(ed) to the people of those states.”

Ballot proposals for black suffrage had been defeated repeatedly in the Northern states. And even as Congress considered the proposed 15th Amendment in February 1869, no more than a handful of members were ready to see it mandated nationwide. Instead of directly assuring black Americans of the vote, as passed by Congress, the 15th Amendment went only as far as prohibiting states from denying the vote to an adult male solely on the basis of “race, color, or previous condition of servitude.” In its vagueness on what would constitute a violation of this provision, the amendment, as one of its Republican champions made clear, otherwise left the “whole power” to determine suffrage requirements to the states, which, he added, might include “property and educational tests.” These and other tests were already in place in some Northern states, and, with the ensuing national retreat from the ideals of Radical Reconstruction, they would become key weapons in the arsenal of white supremacy throughout the old Confederacy.

The Radical Republicans and others who publicly invested so much hope for the future in their campaign to oust Andrew Johnson might well have acknowledged privately that he was hardly the only impediment—or even the biggest one—to securing political equality for all black Americans in 1868.

In any case, the most important lesson we can draw from the first impeachment experience may be that if we undertake another such venture, we should not proceed solely on the assumption that all the menacing and iniquitous forces astir in our land can be stilled simply by changing the occupant of the White House.