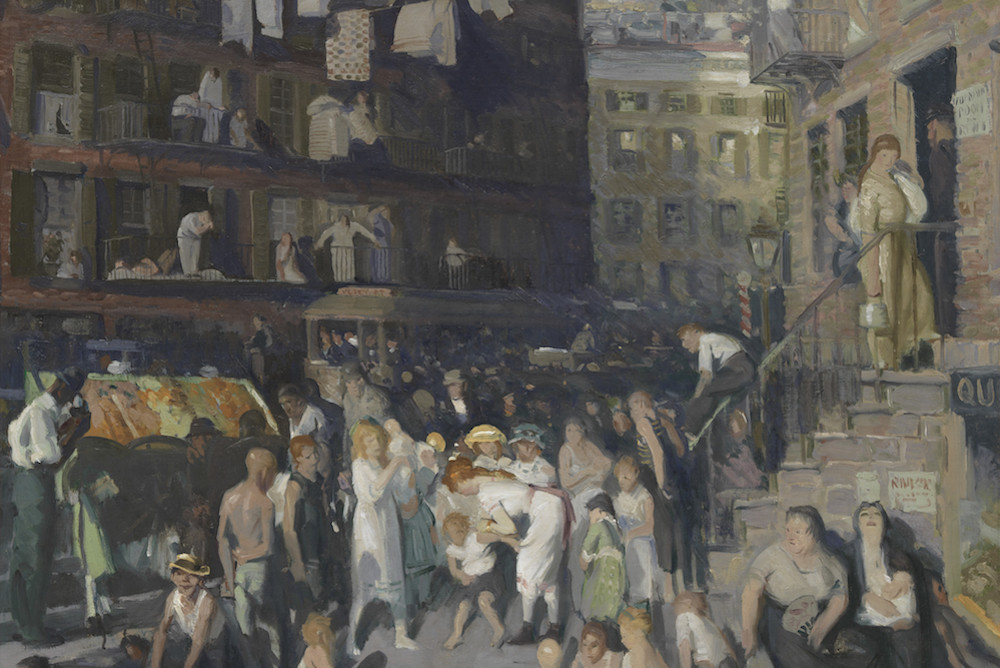 Cliff Dwellers, an oil painting completed by George Bellows in 1913, depicts Manhattan’s Lower East Side in the early 20th century when it was home to many immigrants. Courtesy of the Los Angeles County Museum of Art.

He came to me in a dream,
wet as a newborn in his new skin.
I readied him for a bowl of bitter world
(the cathedral two blocks away from our flat in the city),
like an invitation I didn’t dare open,
like one long road of night, cold, and hard as hail,

with no reason to make anyone salute or hail
(after all, this is America’s fright-dream:
doors and windows refusing to open,
flesh-eaters and fear devouring our lengths of skin
in this most desolate, unforgiving city,
in this brief heyday of a gone-mad world).

Is the planet even recognizable as a world,
life of its flora and fauna fading, hail
falling upon once-proud cities
nothing more than a Hollywood dream?
It appears nothing matters but skin
and the ways our mini-gods have found to open

it to malevolence and decimation, to open
its veins to intolerance just as the world’s
natives try to celebrate their colorful skins,
just as every man and woman is ready to hail
Dr. King who preached that once, he had a dream
of Colorado’s Rockies, the Alleghenys, of every city

becoming more than the sum of its parts, every city
refusing calls to wall the people in, trying to open
into the truth of the dirge I Dreamed A Dream
and it is of this moment and it is of this world
and it is something to see, something as rich to hail
as our black, brown, white, yellow or red skins

because the common bloodline pulsing our skins—
whether we live in Harvard Square or Yuma City—
shouldn’t be one long road of night, hard as hail;
should be an invitation for each person to open
as everyone knows anyone who comes in a dream
is hungry to rise above this bowl of bitter world.

Open the city doors. Open into the world.
Hail one thousand skins. And dream.