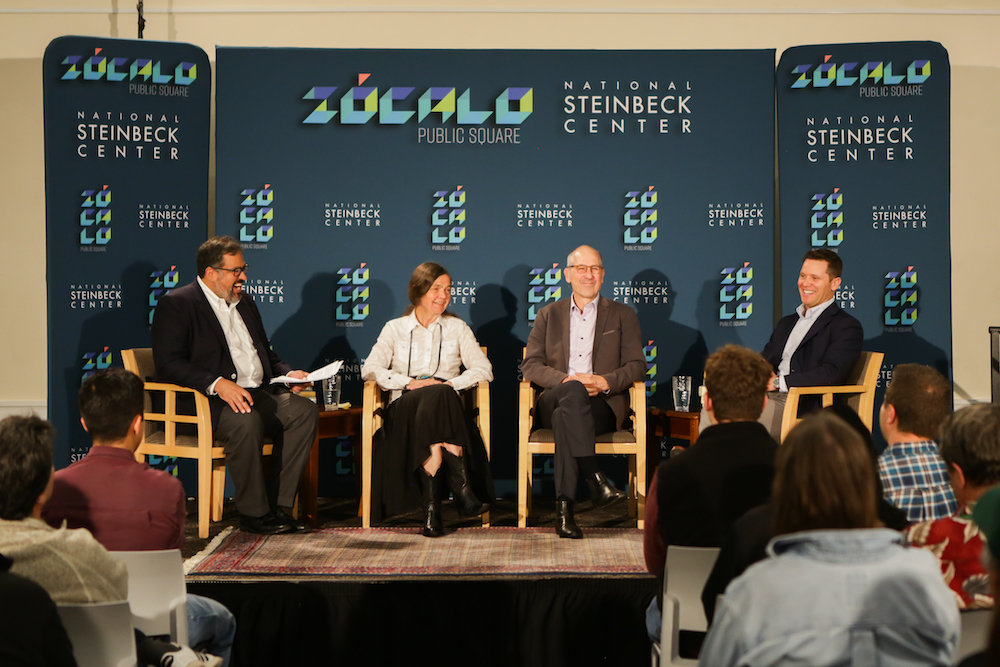 Americans of wildly disparate backgrounds have managed to find common ground over the course of the country’s history. But the process of cohering has been haphazard, raucous, messy and cruel, said distinguished scholars at a Zócalo/National Steinbeck Center event.

The panel discussion—titled “Did Americans Ever Get Along?” and held before a full house at the National Steinbeck Center in Salinas, California—took as its starting point the essay “E Pluribus Unum,” by the Nobel laureate and author John Steinbeck, from his 1966 collection America and the Americans.

Zócalo founder and publisher Gregory Rodriguez, who served as the event’s moderator, kicked off the conversation by reading three sections of that piece, including the following:

From the first we have treated our minorities abominably, the way the old boys do the new kids in school. All that was required to release this mechanism of oppression and sadism was that the newcomers be meek, poor, weak in numbers, and unprotected—although it helped if their skin, hair, eyes were different and if they spoke some language other than English or worshiped in some church other than Protestant… It occurs to me that this very cruelty toward newcomers might go far to explain the speed with which the ethnic and national strangers merged with the Americans.

Rodriguez then asked all three panelists whether Steinbeck was right. Has America really cohered through a process of hazing?

Yes, the scholars answered, though each gave different reasons, and caveats, for their answers.

“The first thing [the Steinbeck essay] made me think of was my mother who is 93 and an immigrant herself,” said the American historian Gary Gerstle, now at Cambridge University in England. “I caught her once saying, ‘The immigrants today are not what the Founding Fathers imagined.’” Gerstle said he chided her for complaining about today’s immigrants by asking what made her such an expert on the Founding Fathers, since she had immigrated only in 1938.

Steinbeck’s argument, Gerstle said, “captures the raucous character of American society and reminds us that … a sense of unum does emerge but it does not emerge easily, blissfully.”

Pressed by Rodriguez to describe the major ways that Americans cohere, Gerstle said that unity here has come through integrating institutions, like the military. But he also stressed that the United States has always been governed by two conflicting ideologies when it comes to society and cohesion.

The first he calls “civic nationalism”—the idea that anyone can come to America and—if you’re willing to work hard and obey the law and subscribe to American ideas—you can make a good place for yourself here. “It’s a remarkably welcoming creed,” he said. But the second ideology is “racial nationalism”—the idea that “America is a place for Europeans and descendants of Europeans. And if you don’t come from that part of the world… this is not going to be a welcoming place for you.”

Americans fight over these two ideologies, he said, but the real war between them is internal—since both impulses are often present inside the very same people. He added that, despite the country’s troubles today with race-based nationalism, “I have a great confidence in the ability of civic nationalism to renew itself, but it will never completely defeat the racial nationalism.”

Patricia Limerick, a University of Colorado historian and faculty director at the Center of the American West, also observed that Steinbeck’s hazing concept of American integration had some accuracy. She noted that for diverse peoples “there are worse ways to get to know each other” than through the process the author described, and that such integration is never easy. “We might set ourselves up for bitter disappointment if we think this should be a group hug,” she said.

But Limerick, along with Gerstle, noted that Steinbeck’s framing of American integration as a series of hazings didn’t fit the experiences of Native Americans and African Americans. And she argued that the finding of common ground has been vastly more complicated in the American West, which “has so many different lines of identity and division” that are rooted in its history of being conquered.

Stanford University sociologist Tomás Jiménez said that one thing Steinbeck left out of his description is the degree to which American assimilation changes not just the immigrants, but also native-born Americans whose families have been here for some time. As new arrivals integrate into the American mainstream, they change the mainstream in the process.

“As immigrants give up something to come here and gain something… the people who have been here a long time feel like they lose something,” said Jiménez. “The process is turbulent,” he added. “It’s a story of ambivalence. It’s a story of gain and loss.”

One question facing the country today, Jiménez said, is whether, in another 40 years, Americans will be able to write the same story about the process of integration for the Central Americans and Muslims and East Asians who are coming to the country now.

The panelists struggled with Rodriguez’s persistent questions about what “getting along” means for Americans. Is “getting along” love? Tolerance? Or just not killing your neighbor?

“As immigrants give up something to come here and gain something… the people who have been here a long time feel like they lose something,” said Jiménez. “The process is turbulent,” he added. “It’s a story of ambivalence. It’s a story of gain and loss.”

Gerstle suggested that the answer lay in the ability to create and maintain a common culture, including a mass culture that has been shaped by immigrants, which the United States has successfully exported. “One of the interesting things about American society is that the understanding of what the common culture constitutes has the capacity to change,” he said. “And often the agents of change are the newcomers.”

He noted that the country was founded by Protestant fanatics—the Puritans—but it later integrated Jews and Catholics and became a “Judeo-Christian” nation. As the Muslim population grows, America might someday even reinvent itself as an “Abrahamic-Christian” nation.

And yet, ideals are not the only things that make people live as peaceful neighbors. Limerick pointed to the role of commerce—and the value of hypocrisy, of people pretending to like each other—as a “spectacular way of making people behave better” and get along.

Jiménez said that getting along meant agreement that “we are playing by the same rules” but that it also meant, at least in an aspirational sense, “an absence of conflict.” To that, Limerick and Gerstle countered that conflict can be good, if it’s “productively managed” or leads to further integration.

“I think what’s worrying us now is we don’t know where the current conflict is going to go,” Gerstle said. “Or whether it’s going to have the same kind of positive resolution” as previous conflicts in America.

During a question-and-answer session with the audience, one young man rose to ask if the U.S. is ever going to run out of newcomers and minorities to haze?

The scholars agreed on this point: No. Jiménez noted that when immigration slowed to a trickle in the middle of the 20th century, the country identified a new enemy in Russians and the Soviet Union. Limerick said Americans have an “amnesiac quality” and may simply repeat earlier waves of scapegoating that they’ve forgotten.

Gerstle said that not only will we never run out of people to turn into “the other,” but the likelihood of a growing climate crisis will create new migrants and “intensify the search for scapegoats.” 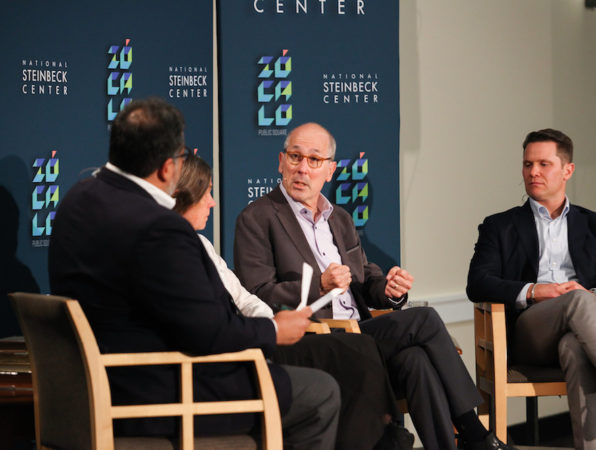 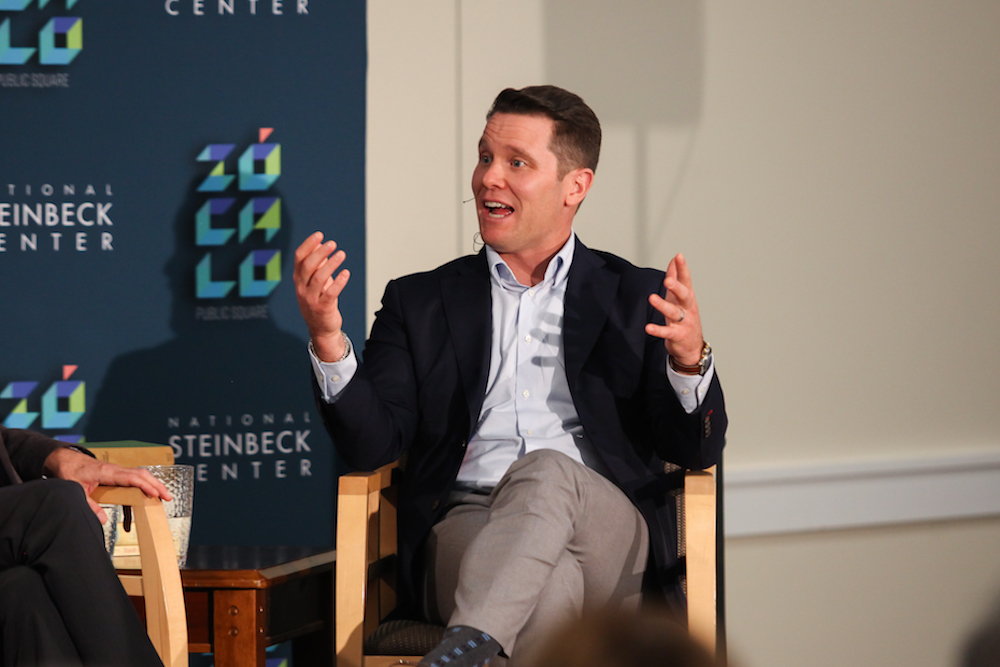 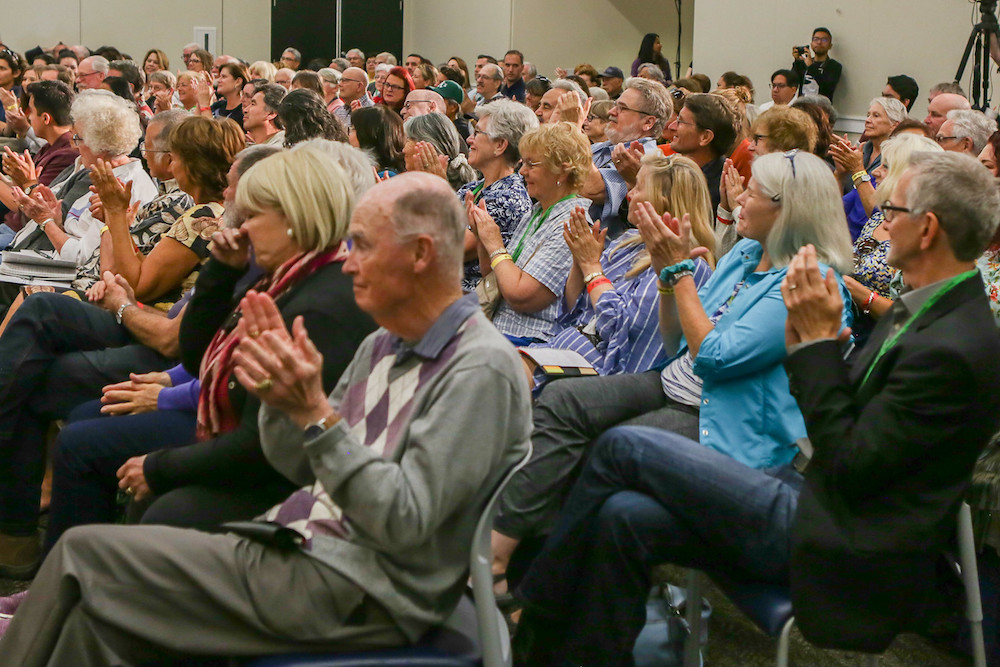 A full house at the National Steinbeck Center. 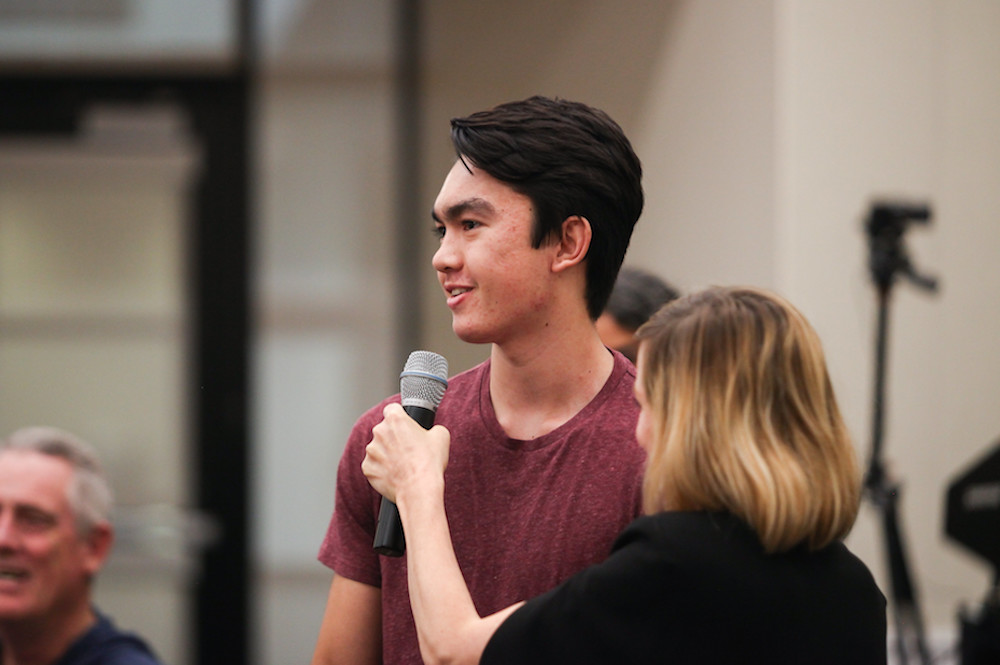 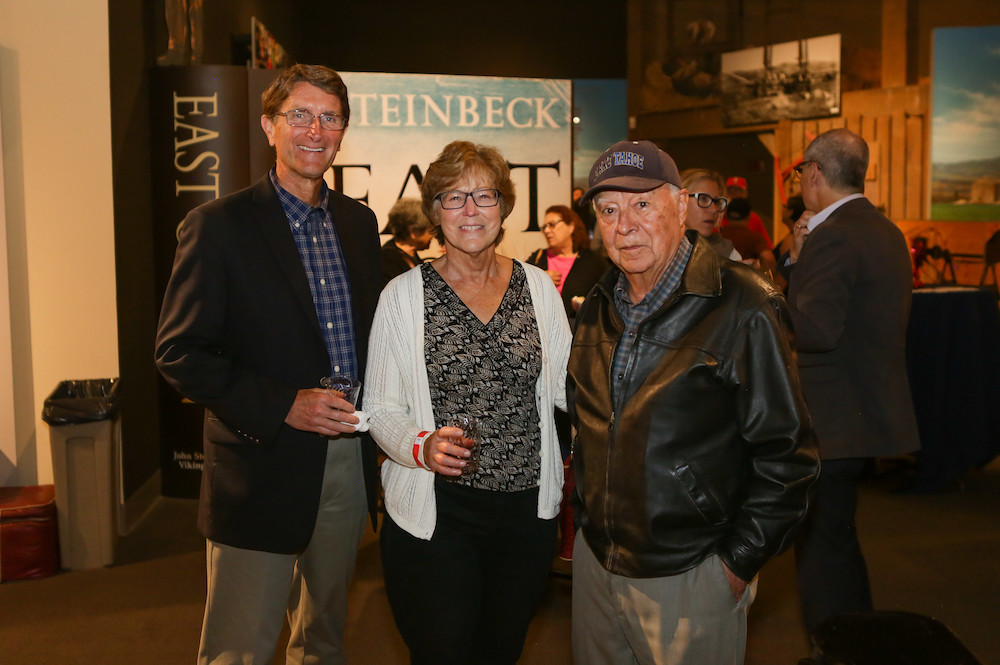 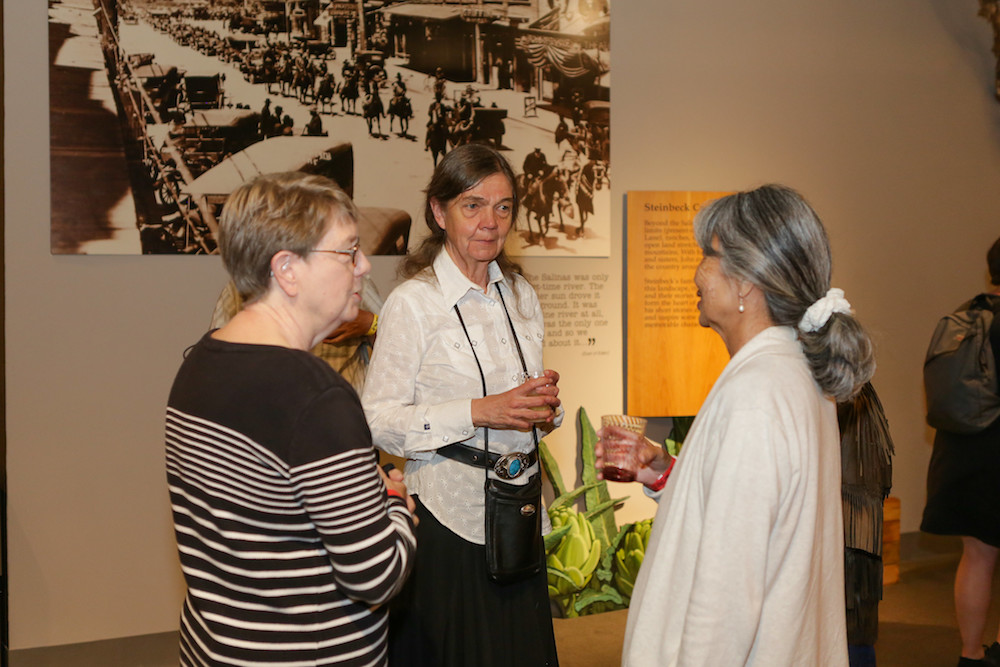 Patricia Limerick, University of Colorado historian and faculty director of the Center of the American West, speaks with guests at the reception.