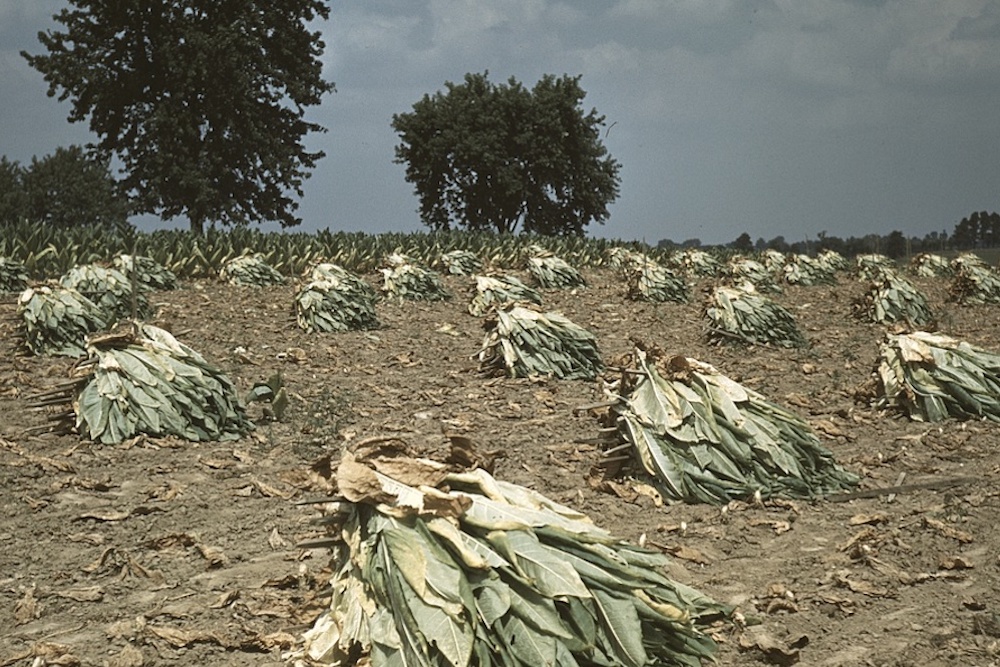 Burley tobacco is placed on sticks to wilt after cutting before being taken into the barn for drying and curing. Courtesy of the Library of Congress.

In the summer of 1619, some of England’s first American colonists were carving up land seized from the Powhatan empire along the James River in Virginia. While the first settlers had arrived back in 1607, they had only recently discovered that they could turn a profit growing tobacco. Tobacco production had increased 20-fold over the past two years, and agricultural land was suddenly at a premium.

Yet the surveyors, instead of laying out private estates for upwardly mobile colonists, were mostly tracing the bounds of thousands of acres of common land. These vast tracts of public land were intended to accommodate hundreds of new colonists and their families, who would serve as tenants, raising crops and paying rents to support infrastructure while learning agricultural skills.

This symbiotic vision of common land and public institutions was one of the most dramatic innovations in the history of English colonialism to that point. But we have lost sight of that original vision and how it was undermined.

In late July of 1619, delegates gathered at the colony’s first representative government for white men. Just a few weeks later, two ships arrived in the colony and traded away a cargo of African prisoners seized from a Portuguese slaving vessel, inaugurating a bitter history of slavery and racism in English North America.

This confluence of events happened seemingly by chance. But slavery and exploitation were not unforeseen by-products of an American drive for free land and free enterprise. They were bound up with a conscious decision to turn away from public land and public institutions in early Virginia. The full story of 1619 is the tragedy of how early English Americans’ desire for private land and individual freedom, which we have long celebrated, went hand in hand with their determination to exploit and enslave. Virginia’s leaders made a conscious choice to abandon the commons by privatizing land and purchasing laborers, choices that would reverberate for centuries.

Because Virginia had been settled by a company, all profits were supposed to be shared between investors and settlers. By 1617, though, colonists were reporting that acting governor Samuel Argall had seized company property and was forcing them to grow tobacco for his own private gain.

This news enraged the most idealistic shareholders. These men, led by veteran politician Sir Edwin Sandys, envisioned Virginia as an ideal new English society. Sandys seized control of the Virginia Company in 1618 and dispatched a new governor, Sir George Yeardley, with instructions for comprehensive reforms that became known as the colony’s Great Charter—a Magna Carta for English America.

This is perhaps one of the most misunderstood events in early American history. The instructions have long been remembered for establishing a system of private grants on the land the English had seized from indigenous people, and for establishing the 1619 General Assembly as a representative body for the new class of private landowning individuals. Yet Sandys’s charter mandated not the distribution of private land but rather the division of Powhatan land into large commons—an aspect that has been all but lost to public memory.

The Great Charter actually organized Virginia colonists into “four Cities or Boroughs”; anyone wanting to receive private land had to be a member of one of these communities. Rather than focusing on the private grants, the charter carefully outlined the allocation of thousands of acres of conquered land to each of these new communities to hold in common. Each borough’s public lands were to be farmed by new tenant families that the company would ship to Virginia. The new families would pay rent, with the revenues used to fund infrastructure, capitalize new industries, and pay public officials, and all the while they would gain the experience necessary to become independent farmers.

This was a public version of the American dream, albeit one limited to white men. All English male colonists would have access to land while also having a stake in common resources and a shared sense of identity. Public servants would be able to count on a reliable income that would “take away all occasion of oppression and corruption” and encourage evenhanded regulation of trade.

From the outset there were practical problems. For the system to work, large numbers of new migrants needed tools and supplies to clear and cultivate land, so they could pay rents. Although company leaders dispatched throngs of new migrants to Virginia, the people they sent were poorly provisioned, and many arrived at the wrong time of year to begin planting. Thousands of these new migrants died. Although as many as 4,000 new colonists had arrived by 1624, the total English population of Virginia only grew by a few hundred.

These practical problems, though, were vastly compounded by the actions of those who opposed the vision of the Great Charter. Some investors in England actively worked to undermine the public structure and replace it with a more hierarchical system of large private estates controlled by aristocrats. A faction including two former Virginia governors sabotaged the plan by withholding investment until the communal structure was revoked and the colony’s governance was placed in the hands of men recognized for their “Eminence, or Nobility.”

Meanwhile, in Virginia, some colonists went even further to stymie the realization of a communal vision. When asked to contribute labor to their communities, colonists protested “as much as if all their goods had been taken from them,” one commentator said. Such reports—true or not—helped to justify the argument that the whole communal enterprise was failing, inaugurating a myth about the “tragedy of the commons” that perpetuates to this day.

Delegates at the much-celebrated 1619 General Assembly neglected to take any action to shore up the colony’s common land or protect new tenants. Instead, individual planters petitioned company officials in London to send not tenants, but bound servants who could be “let out” to them—forced to labor for five to seven years on private estates. Ready access to easily exploitable labor, one planter claimed, was the only way to “restore the fire in the hearts of the Adventurers.” These proposals set out a privatized vision of the colony’s economy and society, in which individual gain was the only effective motive.

Virginia’s leaders made a conscious choice to abandon the commons by privatizing land and purchasing laborers, choices that would reverberate for centuries.

Over the next few years, Virginia’s leaders used the pretext of limited supplies and facilities to commandeer new immigrants. The system of indentured servitude would soon result in men and women being traded and even gambled away.

It was into this context, with Sandys’s vision of public land and the common good under attack, that the privateering vessels White Lion and Treasurer (well-known to many of the colony’s leaders) landed on Virginia’s shores with their African prisoners in the late summer of 1619. Given their knowledge of enslavement in the Spanish and Portuguese Empires, English colonists almost certainly assumed that, unlike white migrants, the Africans would be held in perpetual bondage. More important than the precise legal terms of their exploitation, though, was the fact that the Africans arrived outside the company’s framework of tenants and common lands that still controlled the arriving English immigrants. Not coincidentally, then, just as colonists were appealing for the chance to convert company tenants into servants, these ships, crewed by their friends and fellow Englishmen, brought laborers who could be even more easily commodified for private purposes.

This was precisely what happened. The prisoners were commandeered by a small group of planters. John Rolfe, who first reported the arrival of the so-called “20 and odd” Africans, cagily noted that they were purchased by the “Governor and Cape Merchant,” the company’s official trade coordinator in the colony. This official involvement implies that the men and women were exchanged for public supplies.

When this group of prisoners next appeared in the records, however, most of them were laboring on the private estates of the colony’s leading figures, where they would remain for the rest of their lives. Although it would take years for African slavery to be formalized in Virginia law, the experience of these first Africans set an important precedent. Their vulnerability to sale played into the hands of English colonists who were eager to overturn the system of common land that America’s Magna Carta had stipulated.

Within a few years, the English Crown revoked the Virginia Company’s control over the colony. The Great Charter and its vision of shared public infrastructure nurturing colonial opportunity was abandoned. Virginia became a place where bound and coerced workers satiated planters’ abstract demand for cheap labor to cultivate isolated private estates.

The effort to balance public and private interests was crushed by a race to both privatize land and commodify labor. The fate of the African arrivals in 1619 and the future of representative government in English America were ultimately driven by the undermining of the commons.

Americans have begun to absorb some of the lessons of 1619, from the horrors of the theft of land from indigenous peoples to the bitter legacy of the trans-Atlantic slave trade. But the critical insight we have missed from that year is that the weakening of public institutions leaves vulnerable groups exposed to exploitation. As we grapple with the legacies of racism and abuse from 17th-century Virginia, we would do well to remind ourselves of Sandys’s observation that “the maintaining of the public in all estates” is “of no less importance, even for the benefit of the Private, then the root and body of a Tree are to the particular branches.”