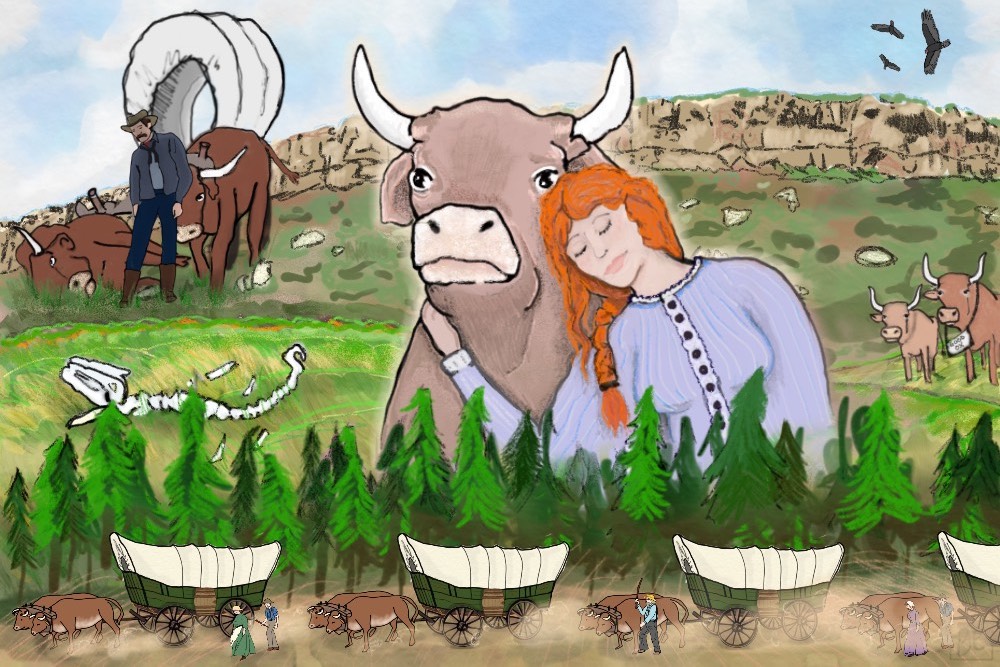 Between 1840 and 1869, approximately 300,000 people crossed the United States on their way to settle in Oregon, find gold in California, or practice religion as they desired in Utah. The story of these emigrants, who were soon known as “overlanders,” is well known, taught in every school in the United States. Despite the popularity of Hollywood films on the experience, and even a now-classic 1971 video game, The Oregon Trail, we rarely talk about the animals that took the pioneers west. These draft animals played roles that proved them to be more than simple haulers of goods, as the overlanders and their oxen came to form relationships that the emigrants themselves never anticipated.

In movies, it is horses that pull the wagons through the Great Plains, through the deserts, and over the Sierra Nevada: Horses are graceful and elegant, and Hollywood producers and directors chose beauty over reality. But over the three decades of westward emigration, oxen comprised half to three-quarters of the animals that pulled the wagons. Unlike horses, they were steadier, stronger, and less likely to be stolen by Native Americans.

The 2,000-mile journey west took three to five months, depending on the route. Emigrants brought many things with them, including household goods, farming equipment, and supplies for the animals, such as whiffletrees—a swinging bar that connects the harness and the wagon—and, of course, yokes for the oxen.

The emigrants also carried with them religious ideas about how to care for their animals. By the mid-19th century, Protestant ministers taught the importance of being kind to animals and reminded emigrants that Sabbath rest also applied to livestock. Ministers, such as the Reverend J. H. Avery, pastor of the Congregational Church in Austinburg, Ohio, delivered sermons to travelers warning them not to overdrive their teams, and to walk alongside the oxen instead of riding in the wagons to save the animals from pulling the extra burden of the travelers’ weight. Avery could only hope that his congregation listened carefully to his words of advice. During the same era, teachers also taught schoolchildren to be kind to animals, and taking care of animals became part of middle-class ideology.

While they were well-versed in what religion and schoolteachers taught them, the emigrants never anticipated they would develop a relationship with their oxen that turned into a type of friendship and companionship. The overlanders came from all over the United States, as well as Europe, and not all of them knew how to take care of the animals. For many on the trails, working with oxen was a new experience.

Generally, emigrants purchased their oxen at jumping-off towns near the eastern end of the trail, such as Independence or St. Joseph, Missouri, for $13 to $30 each. In these Missouri River towns, it was often Mexicans who participated in the trade on the Santa Fe Trail who taught the emigrants how to handle the oxen. The trainers and even some emigrants offered tips: The emigrants must speak to the oxen in a manner that the oxen preferred, giving commands in English rather than in the emigrants’ native languages. The emigrants should avoid cuss words, because foul language might provoke the oxen into behavior such as running or generally being unwilling to take orders. Whistling songs often calmed the animals as they pulled the wagons.

During their few days of training, the emigrants and oxen learned to understand one another, opening the door to a closer relationship as their time together went from days to weeks to months. The emigrants came to consider the oxen gentle, calm, patient—even noble.

We rarely talk about the animals that took the pioneers west. These draft animals played roles that proved them to be more than simple haulers of goods, as the overlanders and their oxen came to form relationships that the emigrants themselves never anticipated.

Once the journey began, overlanders quickly learned the significance of the proverb “haste makes waste,” and tried to travel distances that lessened the number of miles to their journey’s end while keeping their oxen as strong and healthy as possible. The health of the oxen came first—so much so that travelers put themselves in danger to protect the animals. During hailstorms, emigrants stood next to their oxen holding blankets or tarps over them so the animals would not be injured by hailstones that were sometimes the size of hens’ eggs or peaches. During thunderstorms, they rushed to their oxen when lightning struck close to the wagon train, which might cause the animals to fall to their knees.

Finding good campsites with water and grass nearby often proved difficult, requiring teams to push further on to find a good location to rest, sometimes arriving only at midnight. Scarce water and food caused health problems for the emigrants and their oxen companions. Other ailments arose, too. Occasionally, oxen’s hooves broke off, causing death within days; bad shoeing, or no shoeing, likely caused the deterioration. Sometimes emigrants poured hot mutton tallow on oxen’s hooves to help. In 1852, Mary Jane Long, a traveler headed to Oregon, cried for wounded oxen as they received this treatment. She knew the journey was especially hard on their hooves, she wrote in her diary.

Overlanders fervently wished to heal their animals, but they possessed few medicines to ease the pain of sores caused by ill-fitting yokes and other wounds. Sometimes solutions materialized. Overlanders initially believed that one series of mysterious and rapid oxen deaths, for example, had been caused by anthrax, which causes blisters to become ulcers and can form in the lungs, on the skin, or in the intestines. But in 1859, when traveler William Babcock cut open an ox that had died suddenly, he discovered that the ox’s lungs and windpipe weren’t infected by the disease, but instead were filled with dust from the trails. Immediately, Babcock’s group began putting more space between each wagon and its team so that the oxen next in line were not forced to breathe in so much dust.

When the trials of the journey proved too much for the oxen, they sometimes simply laid down on the trail. If overlanders could spare the time, they pulled off the trail to let their oxen rest and recover for a few days. More frequently, the oxen had to be abandoned and left behind to fend for themselves. Overlanders often despaired when this happened, their writings show. Some reported that the oxen tried to follow the wagons, but soon fell victim to the wolves.

In 1849, Joseph Bruff found three abandoned oxen in Nevada’s Humboldt Desert, and wrote that their eyes seemed to beg for help from the passing emigrants. Sometimes overlanders believed that the abandoned oxen cried their last farewells to the other animals that slowly passed by them. The oxen’s human companions admitted to shedding tears as they walked by starved and worn out oxen that had given the overlanders their last efforts before collapsing on the side of the trails. Many didn’t have rifles, so they could not end the animals’ suffering.

Emigrants occasionally wrote of returning to a spot where they had abandoned an ox hoping to find it and return it to the wagon train. Sometimes luck was with them and the ox rejoined the journey. Other times abandoned animals were found by another overlander several days later and added to that traveler’s team. In 1852, Lodisa Frizzell encountered an abandoned animal with a note pinned to its head asking that whoever found it should not “abuse her as she had been one of the best” and deserved a good owner if she was found alive. Frizzel’s family took the recovered animal with them as it had recuperated enough to continue the journey.

To describe the innumerable dead animals on the trails, the emigrants used words such as “thick,” “everywhere,” and “scarce out of sight.” They also understood that those that they saw were only a small percentage of the animals that died helping the emigrants cross the continent. In their diaries, some hoped that the oxen might now “rest in peace.”

When the animals were put on the auction blocks in California and Oregon—where draft animals were scarce—many emigrants reported that their hearts ached. But they could not turn down $150 to $200 per yoke, which was an increase of nearly three hundred percent over their initial cost—even though the animals were worn out by the journey.

In the end, the emigrants understood that the relationship they forged with the oxen was temporary and practical. Still, the animals reminded some travelers of the families and friends they left at home. In diaries and letters, overlanders admitted being surprised that they paid as much attention to the oxen as they did—attention far greater than simply using the animals to pull their goods west.

On the long journey, the emigrants and oxen had suffered together, but the travelers came to understand that their success in crossing the continent depended more upon the oxen than their own actions. The special bonds they’d formed with the oxen, although temporary, brought them to their new lives in the West. On the journey, they learned the true merit and meaning of the lessons they’d been taught by ministers and teachers—their success depended on the oxen.