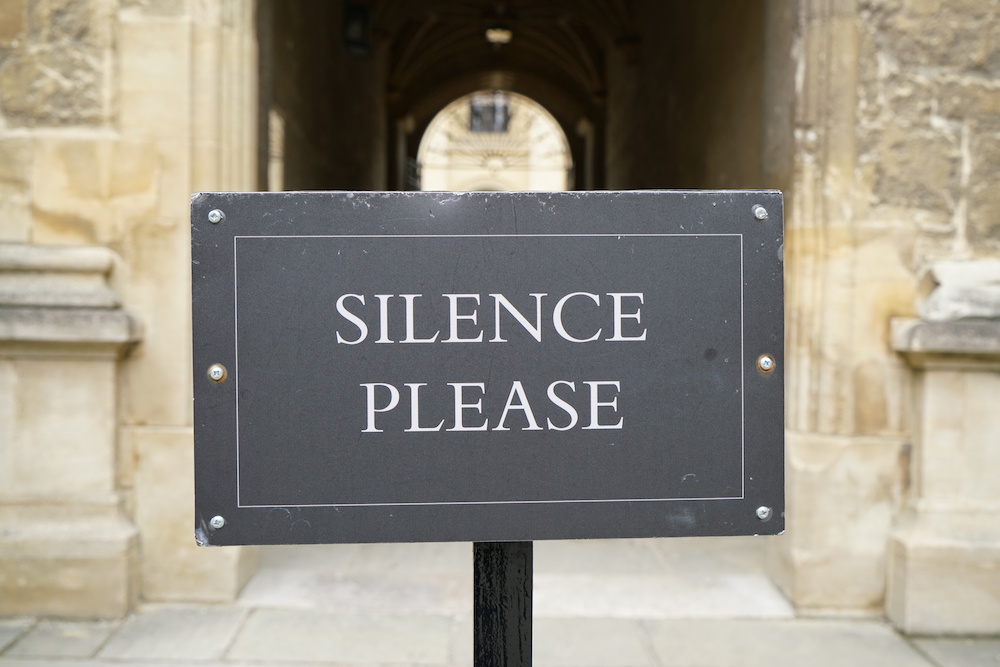 Sign in front of the University of Oxford’s Bodleian Library. Courtesy of Shutterstock.

Everyone claims to want silence right now. Uber is trialing the use of a mute button so you can ride in peace. A British newspaper columnist has finally found a way to forget all her problems—floating in the sea, both ears underwater, the world’s noise blocked out. Even Pope Francis has been at it: In April of this year, he invited opposing South Sudanese leaders to a spiritual retreat at the Vatican and, rather than facilitating verbal negotiation, asked them to meditate on the country’s national anthem.

But once we find silence, how should we respond to it? Words demand skillful listening—attention both to detail and to the big picture, awareness of rhetorical trickery, sensitivity to emotional ambience, alertness to subtext. Silence is equally complex and also requires nuanced readings. Perhaps even more so.

For anyone attempting to make a serious study of silence, the obvious problem is that silence, by its very nature, is difficult to categorize. When he was only 14, the 18th-century poet Alexander Pope—not someone ever to be at a loss for words himself—wrote a poem about this very difficulty. In “On Silence,” the teenage Pope pointed out that silence is the refuge of both the wise person and the fool. Kindly silence is where “routed Reason” can retreat to safety—a dignified option when we feel the argument is going against us—but silence is also a cloak for “Dullness” masquerading as profound thought. Yet how can you tell whether someone who is silent during a discussion is a deliberating genius or a genuine dimwit? Or just somebody whose mind is on other things?

What kinds of silence are there, and how should they be listened to? At its weightiest, silence can be a political expression of pain and complexity, one that compels those who notice it to consider their responsibilities. In her essay, “Can the Subaltern Speak?,” the academic Gayatri Chakravorty Spivak tells the story of her unmarried relative, Bhuvaneswari Bhaduri, who, in 1926, hanged herself in British India, a notoriously restrictive society. According to Spivak, Bhuvaneswari killed herself because, as a member of a militant anti-colonial organization, she had been entrusted with a political assassination which she could not bring herself to carry out. Knowing that it would be assumed that she had decided to die out of shame over an illicit pregnancy, she timed her suicide carefully. When Bhuvaneswari killed herself, she was menstruating. Her body proved what mere words could not, because they wouldn’t have been listened to or believed.

In the age of social media, it’s almost reflexive to react to this silent act of testimony with outraged demands that people in similarly oppressed circumstances be advocated for, amplified, or otherwise enabled to speak. But this is not what Spivak counsels. Bhuvaneswari made her case in her own, very powerful way. It might be more helpful simply to curate such wordless actions, not trying to account for them but drawing attention to them and allowing them to resonate in the wordy cultures that surround them.

But what exactly would it mean to “curate” an act like Bhuvaneswari’s, without involving words of explanation? Talking about experiences brings people together, which is the beginning of political action. Some kinds of silence are oppressive, the opposite of empowerment. Silencing can be punitive; even—as Atul Gawande argued in a New Yorker article on solitary confinement—a component of torture. When we come across silencings, shouldn’t we scream the place down?

Or would a concerted act of group silence—a deliberate public silence—be more effective? In chapter 8 of the Book of Amos, the prophet describes a vision of the destruction of Israel. So many people will be slaughtered, God tells Amos, that their bodies will be brought out of the temples in silence. It is a prediction of a massacre too horrific even for the traditional noises of mourning, remarks Diarmaid MacCulloch. Amos is envisioning people traumatized to speechlessness, so grief-stricken that their lack of verbal reaction becomes something of massive weight. The political impact of such a weight can scarcely be imagined.

Emma Gonzalez imagined it when, on March 24, 2018, she paused in the middle of her speech at the March for Our Lives, until six minutes and 20 seconds had passed: the precise amount of time it took a gunman to kill 17 people at Marjory Stoneman Douglas High School. Franklin Leonard, founder of The Black List, called it “one of the most remarkable political moments” he’d seen. 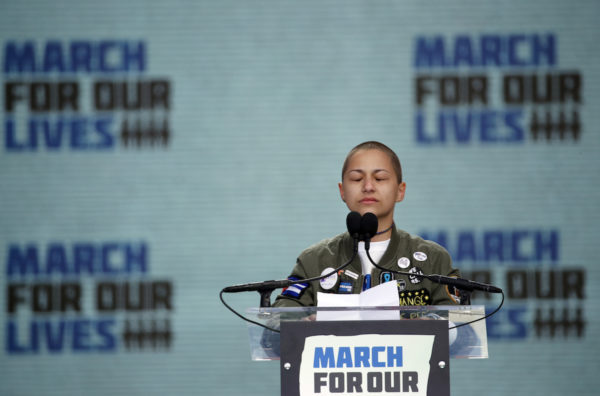 Emma Gonzalez, a survivor of the mass shooting at Marjory Stoneman Douglas High School in Parkland, Florida, pauses during her speech at the March for Our Lives rally in Washington, D.C., on March 24, 2018. Courtesy of Alex Brandon/Associated Press.

Silence, then, is a radical tool.

Not least, it is a route to understanding other people and other points of view. When Pope Francis invited South Sudanese leaders to the Vatican, he was bringing together enemies in a civil war which had left at least 400,000 dead. What did he think that silent reflection would achieve? A colleague of mine, a former headmaster of British Quaker schools, describes experiences that might hold the key. Despite not being a Quaker himself, he came to highly value the role silence played in school policy meetings. Opposing sides would come together and, after putting forward their views, sit in silence. Discussion would begin again and, if there was still disagreement, further silence would be kept. And kept and kept until compromise was reached, as it inevitably was. It’s possible that the silences worked in these instances simply by wearing everyone down: Let’s agree to anything to get this meeting over. But it’s also possible that the reflective opportunities offered by silence do begin to dissolve entrenched positions.

For other kinds of silence, the most appropriate response is likely to be individual compassion rather than political action. In Old Norse legend, Prince Sigurd’s death renders his wife Gudrun catatonic with grief. “Gudrun could not weep; she was so impassioned by the death of the young man,” runs Carolyne Larrington’s translation of the Poetic Edda. Centuries later, the death of another young man had a similar effect on his friend, the Poet Laureate-to-be Alfred Tennyson. When Arthur Hallam died of apoplexy at the age of 22, the 24-year-old Tennyson was devastated. For the next 16 years, from 1833 to 1849, he worked on a long poem about his grief. How can such sorrow be communicated to those who are not feeling it? In In Memoriam A. H. H., Tennyson drew a vivid analogy with the way the sea and rivers interact near the village in southwest England where Hallam was buried. Twice a day the mouth of the River Severn fills with saltwater from the Bristol Channel, and this has the effect of stopping the flow of the River Wye. “The Wye is hushed,” Tennyson wrote, “and hushed my deepest grief of all.” But the flow of tears brings relief, “I can speak a little then.” The very deepest grief of all, that is, is not marked by tears or lamentations. The very deepest grief is silent, and skillful listening to it requires sympathy and consolation.

Such sympathy and consolation may themselves be silent, for silence can arguably produce far deeper communication than words. Henry David Thoreau realized so much when he left his home in Concord, Massachusetts, in 1845, to live a simple life by Walden Pond. Conversing with his neighbor across the pond, Thoreau came to a conclusion about human interaction, “if we would enjoy the most intimate society with that in each of us which is without, or above, being spoken to, we must not only be silent, but commonly so far apart bodily that we cannot possibly hear each other’s voice in any case.”

One can only feel for Thoreau’s spurned neighbor, but this observation about silence extends beyond other human beings to the wider natural world. Nature isn’t completely silent, as any walk in the woods will make clear, but to listen to those silences that do occur in natural environments allows us to become more attuned to the life going on around us. In a beautiful poem by the Pre-Raphaelite poet and painter Dante Gabriel Rossetti, “Silent Noon,” two lovers lie silently in a sun-drenched meadow. Above them, a dragonfly hangs “like a blue thread loosened from the sky.” The silence is nothing less than a love song.

If silence facilitates human intimacy, it is also, in various religions, the way to a closer relationship with God. In her Revelations of Divine Love, for example, the 14th-century mystic Julian of Norwich wrote that God is peace, and the soul is truly joined to Him when it is at peace in itself. Soul-peace is an absence of contrariness, all disturbing thoughts banished away. In the Buddhist tradition, “noble silence” is an internal state of peace, equanimity, and concentration. Such a state is not so much to be listened to as achieved, through skilled meditation. This is intensely private silence, to be listened to—if at all—with respect, awe, and humility.

Where do you find your silences? I find mine in the 12th-century church in the English village in which I live, where, despite being a secular humanist, I attend a monthly Taizé service. Between the simple chants and readings, we keep silence, watching the light shine on the whitewashed walls or following through the windows the waving of the branches of the trees. In these moments, I listen carefully to the silence and come away enriched.