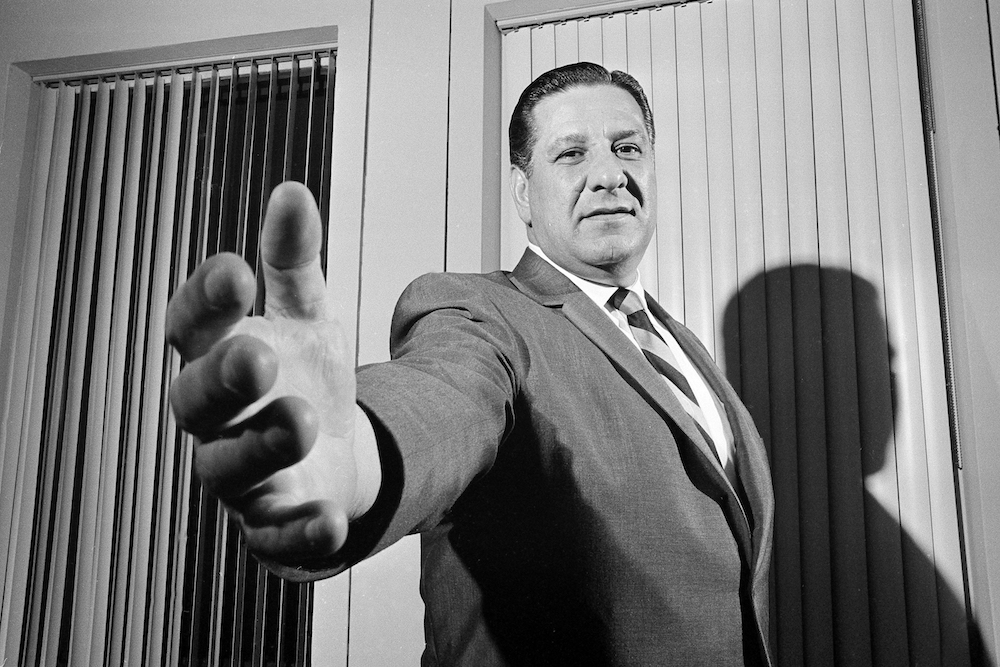 Philadelphia’s City Hall was the largest municipal building in the United States when it opened in 1901. Its most outstanding feature towered 548 feet above the street below: a 37-foot-tall statue of William Penn, keeping watch over the city he founded. For most of the 20th century, the tip of Penn’s cap was the tallest point in what once was the fourth largest city in the country.

The grand building, with its elaborate stonework, also provided a fitting home for a man two local journalists called “the cop who would be king,” Frank Rizzo, who occupied the mayor’s office from 1972 to 1980.

Few figures have ever loomed as large over a time and place as Frank Rizzo did over Philadelphia. Like the statue of Penn high atop City Hall, Rizzo cast a long shadow—figuratively and literally. “Big Frank” stood 6 foot, 2 inches tall, and towered over most contemporaries. More important, he was the quintessential “backlash” politician of the late 20th century, an emblem of urban, white ethnic populist conservatism.

Rizzo opposed public housing, school desegregation, affirmative action, and other liberal programs he deemed “unfair advantages” for people of color. He had a combative style and a penchant for divisive and offensive comments. And he defied partisan politics; Rizzo was a Democrat when he campaigned for Republican Richard Nixon’s reelection campaign in 1972.

Rizzo’s controversy-stoking positions and personality attracted a significant base of support in white ethnic, blue-collar Philadelphia. But he and his Philadelphia supporters were more than products of a specific time and place. They were harbingers of a broader shift in American politics—blue-collar conservatism—that remains a potent political force today.

Rizzo and his brand of blue-collar politics developed at a critical point in modern U.S. history. He owed his rise to the most powerful social movement of his era: the push for African-American civil rights during the 1960s and 1970s. Protests against segregation roiled northern cities like Philadelphia every bit as much as their Southern counterparts—and spurred the rise of a conservative response that proved just as transformative as the civil rights movement it opposed. In Philadelphia, this response grew out of a white, working- and middle-class effort to safeguard “neighborhood” and white ethnic institutions and traditions. As civil rights activists sought to integrate neighborhoods, schools, and work sites, white Philadelphians—many first- and second-generation Americans of European ancestry—fought back, treating African-American advances as a zero-sum game they were losing.

As civil rights protests intensified, blue-collar white ethnics joined a nationwide clamor for “law and order.” Rizzo personified “law and order” and promised to restore it in Philadelphia.

Born in 1920 to Italian immigrants, Rizzo had grown up in a row house in a heavily Italian-American section of South Philadelphia. Blue-collar, white ethnic Philadelphians liked that Rizzo was no “egghead,” as they put it. He had dropped out of high school and followed his father’s footsteps into the Philadelphia Police Department. Starting out as a beat cop, he later earned promotions—and a reputation for taking on vice and illegal gambling, and for leading raids on hot spots favored by gay people.

As Philadelphia’s top cop, Rizzo was fond of saying that the way to treat criminals was “scappo il capo,” an Italian phrase he translated as “crack their heads.” Critics, especially African-Americans, argued that his aggressive policing and “Gestapo tactics” went too far. In 1970, to choose just one example, he ordered police raids on Black Panther Party headquarters throughout the city, allowing police to conduct strip searches in full view of the media. But Rizzo’s admirers never wavered in their support for the controversial police commissioner, and enthusiastically backed him when he resigned his position to run for mayor as the “toughest cop in America” in 1971. When he won, he became the first former police commissioner elected mayor of a U.S. city, and he quickly placed his supporters’ concerns atop his agenda.

Responding to demands for neighborhood sanctity during his campaign, Rizzo promised he wouldn’t allow new public housing in any neighborhood that didn’t want it. In office, he followed through, fighting the construction of several planned public housing projects and either killing them entirely or delaying their completion for years. Rizzo was also a vocal opponent of “busing”—a widespread euphemism for opposition to school desegregation—and he personally intervened to stop state-mandated public school integration efforts. The city halted all student transfer plans in favor of something called “voluntary desegregation.” As a result, Philadelphia’s public school system became one of the most segregated in the nation. It remains so today.

Rizzo and his brand of blue-collar politics developed at a critical point in modern U.S. history. He owed his rise to the most powerful social movement of his era: the push for African-American civil rights during the 1960s and 1970s.

These controversial policies made Rizzo incredibly popular with his base, which supported him through scandals and political fights. Charges of misappropriating public funds and using the police as a personal spy ring, along with frequent public gaffes, made Rizzo a target among liberals in his own Democratic Party. Rizzo survived a primary challenger in 1975 and coasted to his second term in the mayor’s office, but he was enraged by his liberal critics and promised retaliation, telling reporters that he would “make Attila the Hun look like a f****t” when dealing with his political enemies. The comment became one of the most famous of his entire career—an incendiary statement typical of his aggressive masculinity.

None of the controversies around Rizzo ever jeopardized the support he received from white ethnic, blue-collar Philadelphians. They applauded his inflammatory remarks as the mayor “speaking his mind” and “telling it as it is.” They cheered his opposition to public housing, school desegregation, affirmative action, and other liberal programs they perceived as “unfair.” These voters helped Rizzo overcome a recall drive in 1976. They even supported his 1978 campaign to change the city charter to allow him to run for a third, consecutive term as mayor—an effort that only fell apart after the mayor told an audience to “vote white” for charter change, mobilizing a new anti-Rizzo coalition.

Rizzo served out his remaining two years in City Hall before being termed out. But he made several more attempts to regain the mayor’s office, first as a Democrat in 1983, and then as a Republican in 1987. He lost both of those races to W. Wilson Goode, who helped pull together the anti-Rizzo coalition and Philadelphia’s first African-American mayor. Rizzo ran his final mayoral race as a Republican in 1991, but he died after suffering a heart attack on the campaign trail.

Rizzo came to exemplify a larger movement of white working- and middle-class Americans away from liberal politics. In Richard Nixon’s America, for example, Rizzo was a key part of the president’s efforts to wrest white, blue-collar voters away from the Democratic Party. While Nixon employed the famed “Southern strategy” to attract white voters in the South, he similarly considered Rizzo essential to his “urban strategy.”

Racism and resentment fed Rizzo’s political appeal and usefulness to Nixon, but there was also a positive, affirmative aspect to his supporters’ enthusiasm, based on a cultural identity built on shared values of hard work, sacrifice, toughness, pride, and tradition. Rizzo’s backers saw a bit of themselves in an immigrants’ son who had dropped out of high school and worked his way up to the highest position in the city. He often played up his humble ethnic roots, especially as he grew wealthy. As one supporter said when Rizzo ran for mayor in 1971, “He’s one of us. Rizzo came up the hard way.”

There is another way to understand this support. Working- and middle-class whites of the time were engaged in a newly emergent form of identity politics—which amounted to white racial identity politics, cloaked in the language of class pride. Rizzo’s supporters used class identity and class-based rhetoric to avoid accusations of racism. When white neighborhood activists in South Philadelphia fought the construction of the Whitman Park public housing project that Rizzo halted in 1973, they never publicly mentioned race. Rather, they argued that public housing tenants would not take the same pride in their homes as homeowners.

These white identity politics, combined with the politics of relatability in Rizzo’s “one of us” populism, transferred easily to the national stage. Ronald Reagan was especially adept at making appeals to blue-collar whites. In the 1980s, the press dubbed the white working- and middle-class voters who responded to Reagan’s appeals blue-collar values “Reagan Democrats.” But back in 1970s Philadelphia, these same voters had already been “Rizzocrats.”