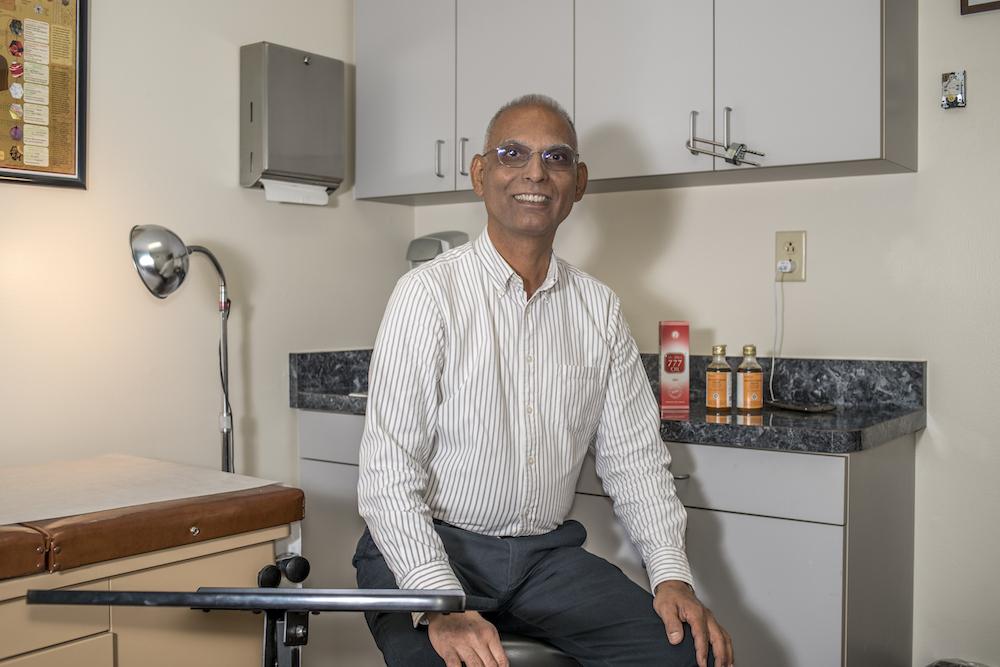 By helping people stay healthy—practicing preventive health, as well as treating disease—we enable them to do what they find meaningful and purposeful. Photo courtesy of Pamela Palma.

How can we help Californians manage chronic conditions and live better lives?

As an immigrant and a doctor of ayurvedic medicine, this has become my calling, but I came to it late in life, through a personal illness, and a chance encounter with a doctor. It so happened that around that time, momentous questions about health care were being debated in the legislatures of a few states in the United States. The questions were: What kinds of alternative health care do people utilize? And, is it legal to practice these various systems of health?

The biggest change in how California practices health care came in 2003, when the Freedom of Health Act was enacted, making it legal to practice all types of alternative medicine in the state. The law recognized that millions of Californians were already receiving a substantial volume of health care services from complementary and alternative health care practitioners. The law opened the door for these practitioners to practice legally under clear guidelines and restrictions, and gave Californians the choice to access the types of therapies they desire.

I hadn’t known much about the traditional Indian practice of ayurvedic medicine until I had been living in the United States for many years. I grew up in India and though my upbringing was very Indian in terms of language, food, and culture, I received a rather Westernized education with an emphasis on science. I came to the U.S. as a graduate student in mechanical engineering at Stanford in 1983. I found the university campus charming and loved everything about the Bay Area. So, after graduating, I found a job in the semi-conductor industry here. I worked in control systems engineering for many years before switching to a career in publishing.

Then, in my 30s, I developed an issue with my gastrointestinal system. I consulted two GI specialists, who did a number of investigations. They could identify, “Okay, this is what is happening.” But how to treat it? How to resolve it? They couldn’t really help me with that. So I resigned myself to living with the problem.

Meanwhile, I chanced upon a course in ayurveda being offered in Watsonville by Dr. Vasant Lad. All I knew about ayurveda then was that it is an ancient system of health that originated in India. Curious to learn more, I registered for the course.

In the class, I was immediately fascinated by the ayurvedic perspective of a wholistic understanding of the entire human being: body, mind, and consciousness. Diagnosis and treatment are informed by a theory of three physiological forces, the doshas—vata, pitta, and kapha—carrying out all the functions of the body, their balance helping to maintain health, and their imbalance leading to disease.

I see ayurveda, and the work that I do, as part of an ongoing shift in health care in California to emphasize preventive health. My patients are already reading about healthy lifestyles, and they’re highly motivated to change. At the same time, I see that interactions between physicians and patients are changing so that the participation of the patient is more important.

I had never used ayurvedic medicine before, but now I eagerly sought a consultation from Dr. Lad. I first told him about the digestive issues that had bothered me for the previous five years. He asked about how my problems started; other symptoms; and my diet (he smiled when I told him how much I like hot green chilies). He carefully examined my tongue, eyes, and nails; and then held both wrists and felt the radial pulse on both hands.

His assessment was that one of my doshas was out of balance. Now, when I look back, it is not surprising because I was eating a lot of very spicy food, and also snacking between meals. Both contributed to acidity and indigestion. To reverse the condition, he recommended a dietary plan, a change of habits, and a mix of herbal medicine. He reassured me that this was not a very serious issue and I would be fine in three to four weeks.

I followed his recommendations strictly, and sure enough, within two weeks I was feeling better. And within four weeks, I was absolutely fine. And not just my symptoms; I could feel that my general health had improved.

The fact that a treatment that benefited me had come from my own culture made me proud—and intrigued. I resolved to learn more. Eventually, when I turned 50, I decided to go to India to study ayurveda in the city of Jamnagar. Because there are thousands of years of writings on ayurveda in Sanskrit, the program, which takes five-and-a-half years, includes daily classes in Sanskrit. Then, with the millennia-old classics as references, we were taught the science of life (“ayur” means life, and “veda” means science). We learned anatomy, physiology, pathology, herbs, and treatment methods. It was quite mind-blowing. It meant some hardship because I had become accustomed to physical comforts, but my passion for ayurveda kept me going. I completed four-and-a-half years of coursework and one year of internship in two ayurveda hospitals.

When I graduated, I came back to San Jose in 2013 and began my practice as a doctor of ayurvedic medicine.

I quickly found that my patients here are very different from the ones I saw in India during my internship. They’re well-educated, and most have already consulted their primary care physicians, done their own research, and chosen ayurveda as a complementary therapy. What usually brings them to me is a chronic health condition like diabetes, acid reflux, or arthritis, for which they prefer a wholistic assessment and treatment. They may want to avoid adverse side effects of long-term use of pharmaceuticals. Also, they seek advice about preventing illness in the first place.

An ayurveda consultation begins with a detailed conversation with the patient not only to note their complaints but also to understand who they are as a person. I observe their individual traits—physical traits, physiological traits, psychological traits—in order to design a personalized treatment plan for them. And just having this extended conversation helps the patient feel that they’re being heard. In a sense, I am helping my patients hear themselves. And that’s what starts the healing process.

I see ayurveda, and the work that I do, as part of an ongoing shift in health care in California to emphasize preventive health. My patients are already reading about healthy lifestyles, and they’re highly motivated to change. At the same time, I see that interactions between physicians and patients are changing so that the participation of the patient is more important. Some of this comes from the patients’ experiences with alternative therapies like ayurveda: They have realized that they can be in charge, deciding what works for them or not. For ayurveda this approach works well because ayurveda also asks for a lot from the patient. The sort of lifestyle changes we recommend do require a lot of cooperation.

Built into each treatment plan are strategies for preventing recurrence of illness, including guidelines for a daily practice of hygiene, massage, and exercise. There’s an old statement than an ounce of prevention is worth a pound of cure. Therapies like ayurveda can back up what is available in the conventional medical system in terms of good eating habits, exercise, stress management, and immunizations. And by helping people stay healthy—practicing preventive health, as well as treating disease—we enable them to do what they find meaningful and purposeful.

In the future, patients will have even more choices about how they receive health care as alternative therapies are integrated into standard care. I believe that ayurveda’s perspective—that the patient is a whole person with a mind, body, and consciousness, all three working together and affecting each other—will become mainstream.