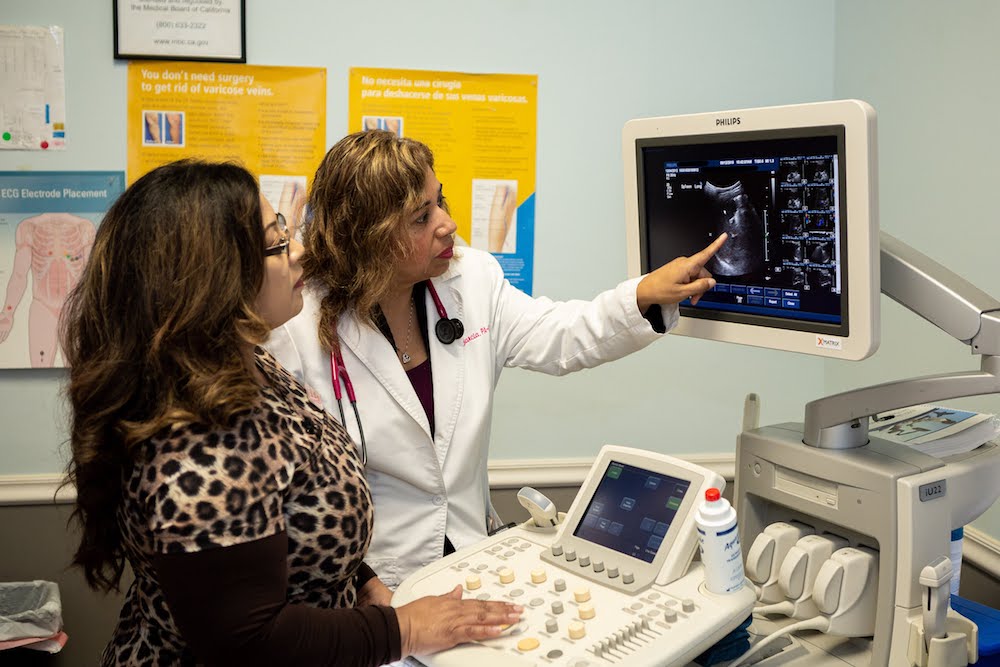 We organize everything here to the benefit of those patients who are hardest to serve. Image courtesy of Ronnie Esparza.

If you walk into the local pharmacy in downtown Gonzales and turn to the right, you’ll see an examination room with an ultrasound machine. It represents more than just a cheaper alternative to an ultrasound at a hospital or other facilities in the Salinas Valley. It’s an example of the health care system I think we should build—one that meets our patients’ and their families’ medical needs first, treating them at the most accessible times and most convenient places for them, and at an affordable cost, regardless of whether they are insured, uninsured, or underinsured.

Because I’m from an immigrant family in this part of California, I had the desire to serve the agricultural community in Gonzales and across the Salinas Valley. Throughout my entire life—growing up in Watsonville and East Salinas, and working professionally in a local hospital and federally-funded clinics—I have seen firsthand what it’s like not to be able to get medical care during an illness. This experience has inspired me to work harder and differently to make sure health care is accessible, affordable, and high-quality.

Lack of accessibility to health care has been an issue in my family for decades. My grandmother died in Mexico from “sick sinus syndrome,” a heart rhythm problem related to the cardiac sinus node. Living in poverty, she didn’t have access to a cardiologist, and couldn’t get the pacemaker and specialty care that would have given her an opportunity to live longer.

My interest in medicine dates from my childhood and adolescence. I happen to have been born in Santa Cruz to migrant farmworker parents who then lived in a farmworker camp in Watsonville. Transportation, and thus access to care, were problems for them; they had to ask for a ride to reach the nearest hospital that accepted the state Medicaid program, 45 minutes away. Consistency of care was also a challenge. Our family—my parents and their five children—were binational; we would live six months in Mexico and six months in the United States, as my parents couldn’t afford to stay here in the winter when the strawberry season and lettuce harvesting were over.

On long family trips to Mexico by car, we would encounter accidents on the roadside where people were injured, and I remember wishing I had the skills to help the wounded. Seeing the complications of diabetes in family members and friends—including premature deaths that could have been prevented with prescriptions, diet changes, and other medical care— strengthened my own desire to become a medical professional.

My interest also stemmed from having had a younger sister who was born with congenital anomalies. She only lived 9 months—three months longer than my parents were told she would survive. My parents at the time were accused of causing the congenital malformation from exposure to drugs or alcohol, but they didn’t use such substances at the time. The more likely cause of her malformations, I later learned, was exposure to pesticides in the fields.

Education was not a priority in our family. My parents, who only had first and second grade educations, wanted me to stop school at the eighth grade. When I didn’t, they stopped supporting me economically, so I had to work, to support myself—and, as the oldest, to support my siblings. Work meant picking strawberries. During the summers, the shifts were 10 hours a day, seven days a week.

As a first-generation high school student, I lacked mentors or even a good counselor; I didn’t know about college prep, honors, or AP classes, and the counselor enrolled me in general education classes during my freshman year at Alisal High School in East Salinas. But I was blessed with having a teacher, Mr. Terry Espinoza, who took an interest in me during his world history class. He asked to look at my schedule, and then he picked up the phone in his classroom, called the counselor, and insisted I be put in college prep and honors classes.

In high school I applied to the Monterey County Youth Program, which placed low-income students in summer jobs. I was lucky to be selected and matched to a job in the x-ray department at Natividad Hospital, a county hospital that provides care to the underserved and uninsured. I found I liked being part of serving these patients; I would go down to the emergency room to pick up x-ray films and translate between doctors and Spanish-speaking patients. The x-ray staff was very supportive, keeping me on after the summer so I could work there for the rest of my high school years.

I married during my junior year of high school, and was pregnant with my son as I applied to four UC schools. I got accepted at each and was offered a full ride at UC Berkeley (I would have paid just $90 a year). But I didn’t have much guidance from the school and didn’t understand my options. In May of my senior year, my son was born prematurely, at just 32 weeks, and my husband underwent back surgery. In support of me, he suggested that I leave my son behind with him so I could continue my education, but as a mother I couldn’t do this, even in pursuit of the dream of becoming a physician. I turned down Berkeley (I wish I had deferred admission, but didn’t understand how that worked), and took care of my premature baby and my husband.

Fortunately, Salinas has an excellent community college, Hartnell College, which I attended before transferring to UC Santa Cruz, where I earned a biology degree.

I have lasting regret that I never became a doctor. I was pre-med and, after graduation, I attended a post-baccalaureate program at UC Davis that was supposed to guarantee med school admission to all 24 students in the program. But it didn’t happen. I recommend UC Davis to people, but, unfortunately, while at the post-bacc program, I was aggressively discouraged from applying to medical schools, and even told by one official that I would be insulting medical schools to think I would get in with my MCAT scores. I was heartbroken, stopped the application process, and didn’t even open the envelopes I received from med schools. Years later, when I did open those envelopes, I discovered that the medical schools at USC and UCLA wanted me. It still brings tears to my eyes when I think about it, and it taught me a lesson that I share with students today: don’t let anyone tell you you’re not good enough, don’t be discouraged, apply and pursue your dreams.

Throughout my entire life—growing up in Watsonville and East Salinas, and working professionally in a local hospital and federally-funded clinics—I have seen firsthand what it’s like not to be able to get medical care during an illness. This experience has inspired me to work harder and differently to make sure health care is accessible, affordable, and high-quality.

My own dream was shattered, but I did return home to serve families like my own, as a physician’s assistant. My family’s own doctor said I could do much of the work a physician does with more flexible hours to raise a family. I now have three children, the youngest of whom is six. (That premature baby is now a strong and healthy Santa Cruz police officer). I worked at the local federally-funded community clinic for over a decade, about 10 miles away from Gonzales, where I live.

The problem in small towns like this is that it is difficult to attract physicians, physician assistants, and other medical professionals. It’s even harder to get them to stay; most leave after a few months. To have reliable providers and continuity of care, we need physicians and physician assistants who have roots in the community and the drive to serve the people here.

At the clinic, I saw many patients who came from Gonzales to my clinic, so, since I live there, I started a project to open up a family practice clinic in Gonzales to provide affordable medical care and ultrasound services. I approached a local doctor, Ignacio Guzman, who grew up in Gonzales in an immigrant family, and shared my vision of providing medical care in our agricultural community at an affordable price. We have started with one examination room and a small waiting room, and we offer affordable ultrasound and lab services inside the pharmacy.

We organize everything here to the benefit of those patients who are hardest to serve. We stay open until 6 p.m., and we don’t take a lunch break until 2—so that we can see people during their own lunch. Our small clinic is open to everyone who needs and seeks medical care, including the uninsured and those on almost any kind of insurance, including Medicare, Medi-Cal, and Central Coast Alliance, a regional nonprofit health plan. (In addition, I helped open and staff a local federally-funded clinic that was about to lose their funding because they couldn’t find a local provider.)

We also advocate for our patients. We don’t offer immunizations yet: We’d like to, but need funding for the refrigerator required for vaccine storage. In the meantime, families seeking vaccines have to drive to Salinas, which is 20 to 30 minutes away, depending on traffic, or take a bus, or pay $50 for a ride to the local public health department.

I also advocate for local students to become medical professionals. I’ve been disappointed that universities like California State University Monterey Bay don’t accept more local students into their physician assistant programs. This contributes to the shortage of medical professionals in the area, and adds to the challenges of providing accessible care and continuity of care, with long-term relationships between the providers and patients. We also need ultrasound technicians and well-qualified medical assistants.

With financial assistance from the city of Gonzales, we were able to purchase the ultrasound machine that now sits inside the Gonzales pharmacy. Our services are open for patients from other medical facilities and open to doctors from other medical practices. We prefer to provide ultrasound in the pharmacy because, in Mexico, people are used to seeing doctors and getting whatever else they might need at the pharmacy. (The local pharmacist, Jimmy Eitoku, shares the vision of making medical services as affordable and accessible as possible).

Before we offered ultrasound services, it was difficult for patients in the south part of Monterey County to access medical imaging at affordable prices. (The cheapest was an hour north, in Gilroy). Because we’re not in a hospital with all that overhead, our ultrasounds are cheaper. While they charge $1,600 in King City for a pelvic ultrasound, here in Gonzales we charge $400. We offer testicular ultrasounds at $180 and abdominal ultrasounds at $225.

But staffing the ultrasound site, and our clinic, has been an issue. We are hurting for local medical staff that are bilingual and invested in the community. We need certified sonographers who are trained in vascular ultrasounds, carotid ultrasounds, and ultrasounds of other body parts.

In other words, we need more people who dream of building a new health system, starting in this small agricultural community.