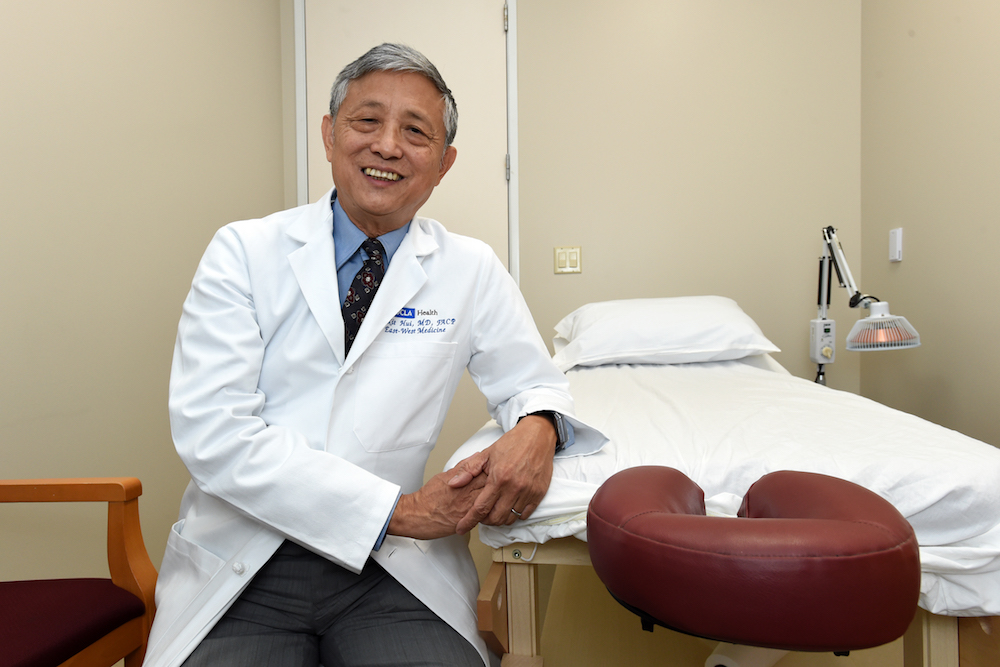 I’ve devoted my life and career to trying to create an integration of American and traditional Chinese medical approaches. Photo courtesy of Juan Ocampo.

I’ve devoted my life and career to trying to create an integration of American and traditional Chinese medical approaches, with the goal of making people all over the world healthier.

Coming from my native Hong Kong to the United States has been crucial to my ability to do this work.

The strong presence of immigrants in medicine is inspiring a reevaluation of medicine and the development of new ideas. Immigration, after all, is a risk, and we need to see more risk-taking to make health care safer, more effective, more affordable, and more accessible.

I see my own journey as a miracle. I arrived at UCLA in late 1968 to study chemistry, with the goal of introducing the Western world to a new drug derived from the Chinese herbal pharmacopoeia. The 2015 Nobel laureate Tu Youyou achieved this in her discovery of artemisinin, the anti-malarial drug derived from a Chinese herb used for fever and chills.

Instead, I decided to dream bigger than just the discovery of new drugs and pursue the vision of establishing an integrative health model of East-West medicine, with an emphasis on health promotion, disease prevention, treatment, and rehabilitation. My method of integrative medicine, established through the UCLA Center for East-West Medicine, which I founded more than 25 years ago, is not like an international buffet, where a provider picks randomly from a disjointed assortment of therapies, such as adding acupuncture or massage to a drug therapy. Instead, it is like a carefully curated dinner menu, with the most appropriate therapies working together to address the specific needs of each patient.

We combine Western biomedicine’s strengths in disease detection, acute condition management, and vital system stabilization with Traditional Chinese Medicine’s concept of balance and emphasis on the body’s innate ability to heal. This approach has been embraced—by hundreds of Western-trained doctors who refer their patients to us, by the thousands of students who have joined our educational programs, and ultimately by medical journals and institutions with which I have worked, from the U.S. Food and Drug Administration and the National Institutes of Health to the World Health Organization.

Coming to the U.S. was a challenge, but pursuing this approach was even a bigger gamble. In my early decades as a doctor, Chinese medicine was seen as quackery, but my mentor, Dr. Sherman Mellinkoff, who was dean of UCLA’s School of Medicine, encouraged me and believed in me as I dug more deeply into the subject and applied the knowledge I learned. I also faced skepticism about the possibility of integrating Traditional Chinese Medicine with Western biomedicine. And I’ve had to reassure the people who work with me as they took career risks to build this field.

In the future, healthcare should be people-centered and community-centered, and should solve problems at their roots—whether those roots are biomedical, or psychosocial, ecological, and spiritual.

My late wife, Shirley Hui, who married me when I was in medical school because of my aspirations to change our system of health, allowed me to devote my full energy to realizing this dream, including using our own money to launch the Center before philanthropic support became available. (I also relied on gifts from friends and patients; our first folding massage table at the Center was donated by a patient). I believe that stress related to this early work contributed to her developing metastatic breast carcinoma that took her away from me, but integrative medicine kept her going for 11-and-a-half years to enjoy our five beautiful grandchildren.

One irony is that, to get to China and understand its traditional medicine, I had to leave Hong Kong for the U.S. Since arriving here, I’ve been able to travel to China, where the government has provided Western-trained medical doctors in China with education in traditional medicine and encouraged Chinese medicine practitioners to pursue Western medical training. China deserves more consideration as a medical model—since it has been able to care for 22% of the world’s population with only 1% of the world’s health care budget.

In my career, I’ve seen an increasing interest in this integration of medicines—including the development of new drugs and approaches to the epidemic of diabetes, the emphasis on considering the natural and social environment of patients, a greater interest in balance and the flow of energy (as opposed to the Western focus on drugs), and the ways we reckon with aging.

This integration is not merely a response to the failures of American medicine, which is not only the world’s most expensive but also engenders high rates of medical errors and produces inadequate beneficial outcomes. Instead, this integration represents a movement to a truly global system of medicine that integrates different healing traditions from around the world.

To draw upon these different traditions, I feel it is crucial to combine rigorous research with treatment. In 1995, we launched our education programs, which seek to learn from each patient we treat, while generating questions for our research. Our goal is that what we learn from each patient will enhance the quality of care of subsequent patients. This generates an educational ripple effect: the physicians and nurses we train become change agents in the transformation of our health care system.

Our progress has been accelerated by greater evidence of efficacy, safety, and cost effectiveness, including studies that that show that acupuncture and body-mind approaches (like meditation or yoga) reduce pain and mood disorders.

We often see patients who have been unable to solve their problems with state-of-the-art Western medicine. First, we assess the diagnostic work-up and treatment they’ve had so far. Then, we do a more complete history of their health, looking at psychosocial, nutritional, and lifestyle factors, and do a conventional physical exam supplemented with a Traditional Chinese Medicine diagnosis that looks at acupoints and the tongue. Treatment might include anything from changes in nutrition or medication to the use of acupressure or tai chi exercises.

Here’s what this looked like for a 72-year-old who came to us with left hip and lower back pain. Medicare had spent $34,000 over 18 months administering six epidural steroid injections, doing several neuroimaging studies, and implanting spinal catheters for morphine infusions four times. At our center, she had seven treatments over three months, which included acupressure massage and education in self-massage and exercise. She experienced complete relief of her pain; Medicare paid $600 for the all of this. (This was the difference in cost in 1999. Now the gap is even greater.)

Such an integration is not radical. Indeed, our center merely matches the broader definitions of health that are starting to take hold around the world. The World Health Organization’s current definition of health is “state of complete physical, mental and social well-being and not merely the absence of disease or infirmity.” Desire for change is strong in many other countries. And we are developing several collaborative projects abroad.

Locally, we collaborate with the Los Angeles County health system to share what we learn in online courses to help health professionals. We also share our knowledge with the Tzu Chi Foundation, an international humanitarian and non-governmental organization that provides medical services in El Salvador, Sri Lanka, Haiti, and Honduras and operates free and mobile clinics, a large bone marrow bank, and hospitals in Taiwan.

I believe that the full potential of this integrated model has not been seen yet, because we are still limited by inadequate financing for its development. But systematic change is possible—I know this as a researcher, educator, clinician, and immigrant. In the future, health care should be people-centered and community-centered, and should solve problems at their roots—whether those roots are biomedical, or psychosocial, ecological, and spiritual.