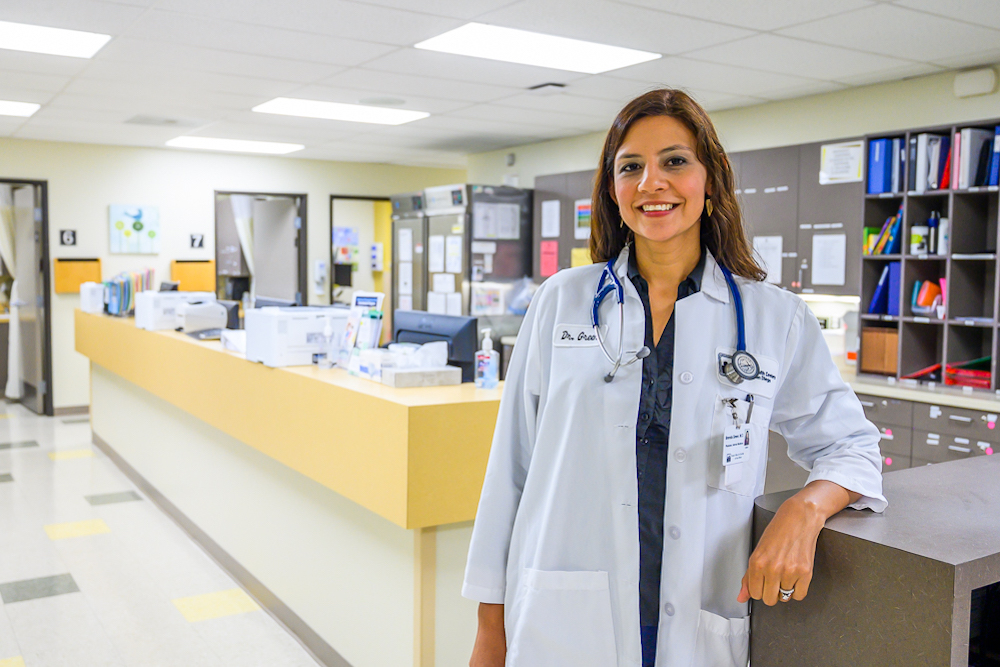 The value of having foreign-trained doctors is not only about speaking the language, but also about understanding the culture. Photo courtesy of Vito Di Stefano.

I practice family medicine at a clinic just a few miles away from the Tijuana medical school where I earned my medical degree. But the journey from medical school to practice was long—not least because the U.S.-Mexico border stood in the way.

My experience—I was trained in Mexico and now practice over the border in Chula Vista, in San Diego County—has taught me about just how vital immigrants are to California’s health care. It’s also shown me that immigrant physicians, like me, can play special roles in medical training and provide services and new perspectives in places where doctors are needed most.

I was born in Monterrey, Mexico, but moved to Tijuana when I was young. Medical school in Mexico is a seven-year program that starts right after high school, giving extensive contact with patients right from the beginning. At the medical school at the Universidad Autonoma de Baja California, I encountered all sorts of people and medical problems, reflecting the diversity of people who live and pass through that border city. I also volunteered as a medical student in the shockingly poor indigenous communities in Baja California del Sur. Mexican medicine is less dependent than American medicine on lab tests, so I became quite good at giving physical exams and talking with the people I treated.

In my 20s, I decided to immigrate to San Diego, as my family grew concerned about violence and crime. I could immigrate quickly with the help of my mother, who is a U.S. citizen, originally from Texas.

At first, I didn’t think I’d be able to stay in California, earn a medical license, and win a residency here. Such positions are very competitive. But then I had the good fortune to get into UCLA’s International Medical Graduate (IMG) program.

The IMG program solves two problems. Medical school graduates from Latin America find it difficult to make the transition to practicing here. And California faces a shortage of doctors in primary care, with more than 600 areas that are defined by the federal government as having a shortage of primary care physicians. Many of those areas are Latino, but fewer than 10 percent of doctors in the state are Latino.

I intervened on behalf of a patient who kept getting injections for an aching back and wouldn’t speak up despite the injections not working. I often remind patients that they have a right to have a translator when they are referred out of our system to see a specialist.

So the IMG program prepares bilingual, bicultural immigrant medical school graduates who reside in the U.S. legally to earn a California medical license and obtain a residency in family medicine. In return, the program’s participants promise to practice in one of the state’s underserved communities for two to three years after their residency is over.

UCLA was great. The program didn’t just help prepare me for the licensing exams and score in the 99th percentile for U.S. students; it also gave me an introduction to the culture of American medicine. I helped teach a Medical Spanish course at Geffen School of Medicine, and, as part of a clerkship, I rotated through the UCLA hospital system. That, and my subsequent internship and residency in family medicine, came with surprises. For all the Latino patients I encountered, I didn’t encounter many Latino doctors. And I was shocked by all the resources and how quickly things happened: in Mexico, my patients had waited days and days to get CT scans, for example.

My patients here remind me of the diverse working people I helped treat in Tijuana. And I’ve tried to use my background and experience on behalf of the community. I started a Spanish-language version of the diabetes group classes here. I often counsel patients who get assigned to specialists but struggle to communicate their needs.

But the value of having foreign-trained doctors is not only about speaking the language, but also about understanding the culture. Sometimes, that makes patients originally from Mexico more willing to share things with me. I’ve had a patient open up to me about rectal bleeding she was experiencing when she wouldn’t talk with other doctors.

In certain circumstances, my background gives me the chance to advocate, or convince my patients to be more assertive. I intervened on behalf of a patient who kept getting injections for an aching back and wouldn’t speak up despite the injections not working. I often remind patients that they have a right to have a translator when they are referred out of our system to see a specialist. And I’ve been able to make some progress convincing mothers from Mexico, where baby formula is highly popular, of the virtues of breast milk.

In family medicine, I have the advantage of seeing multiple generations of a family, from the grandma to the baby. That allows me to understand the family environment and diet and suggest changes that can reduce the risks of diabetes. With elderly patients, who sometimes struggle to read, I’m able to communicate clear dosage instructions through younger relatives. When dealing with a colicky baby, I talk with a grandmother about not feeding them in ways that may contribute to the problem.

And in border communities, I’ve seen treatment become broader and more culturally sensitive because we have both physicians and patients who have migrated from so many different parts of the world. We screen people for a variety of diseases from around the globe, and are very attentive to the risks associated with hepatitis B and other infectious diseases.

When it comes to health care, at least, the border isn’t much of a barrier anymore.