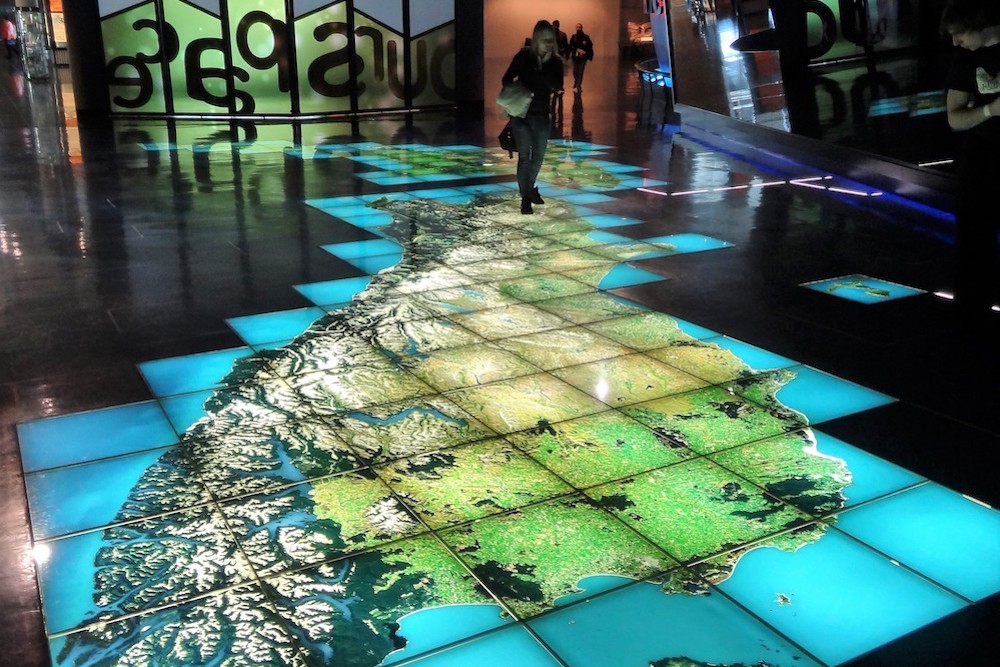 Museums are often dismissed as irrelevant diversions, as places apart, as tombs for pasts that don’t have much to do with the present.

But I study the world’s heritage museums—the national, state, or city museums that tell stories from the past—and I am convinced that the best of these institutions forge national identity and impact our civic actions far more profoundly than we recognize. National identity is a myth we create together in order to cooperate as large societies, and heritage museums tell the stories that perpetuate—and also modify—those national myths.

Te Papa avoids the classic trap of national museums which sometimes assert either that the old story of national history has always been right or that a new story of national identity is vastly superior, by instead embracing the ambiguity of these stories. My research, focused on the rhetoric used by heritage museums, convinces me that one-sided assertions only persuade those who already believe them. Te Papa and other persuasive museums instead ask visitors to think about the highs and lows of a society rather than merely demand their allegiance. Paradoxically, what is more persuasive in developing national identity is asking people to contemplate alternative views of and paths for their nation.

Te Papa, which opened in 1998, draws approximately one-fifth of New Zealand’s population each year, alongside hundreds of thousands of foreign visitors. “Identity” is such a focus that its logo is a giant fingerprint, and it asks visitors from the moment they enter to think about what it means to be a New Zealander today.

This starts with its name. “Te papa tongarewa” translates as “the place where treasured things are held,” according to the guide provided for visitors. Its collections—indigenous Maori, European settler, and (most recently) Pacific Islander artifacts—demonstrate that the common heritage of the nation includes treasures from multiple cultures. The dual-language (English/Maori) signage and careful depiction of multiple viewpoints emphasize this hybridity as well. Its Te Marae meeting house, a traditional Maori structure, incorporates symbols from Maori, European, Asian, and Pacific cultures and “embodies the spirit of bicultural partnership that lies at the heart of the Museum, and is based on the idea that Te Papa is a forum for the nation,” according to the Te Papa website. The first two of the museum’s four exhibit floors repeatedly emphasize two unifying traits: the connection to New Zealand’s landscape that Europeans and Maoris share, and the history that all New Zealanders share as seafarers who arrived relatively recently (Maori settlers arrived in the 13th century, Europeans in the 17th to 19th centuries, Pacific Islanders largely after World War II).

The interactive exhibit Ourspace, which ran from 2008-2014, involved visitors themselves in creating a shared nation. Ourspace was a giant floor map of the country onto which visitors’ footsteps triggered preset images of New Zealand’s people and places. Visitors were invited to upload their own images to “create your vision of New Zealand … mix it, own it, share it.” Over 10,000 images were contributed by the time the exhibit closed. Crucially, these individual images were mixed with those of others for the next visitors to see. So, rather than visitors selecting the New Zealand they wished for themselves, they were contributing to a hybrid communal identity—the same hybridity embodied in the design of the newer Te Marae exhibit.

Only after firmly cementing these commonalities does the museum shift to presenting the nation’s divergent challenges. A recent exhibit chronicled the European/Maori wars of the 19th century, for instance. A permanent exhibit considers refugee struggles. And until 2016, a final exhibit on the many social changes of 20th century New Zealand summed up the Te Papa identity as both glue and goad in its final placard:

Us and Them: Entering the 1950s, New Zealand society seems prosperous, peaceful, and integrated. The ‘us’ behind this image of unity are heterosexual Pākehā blokes (male European New Zealanders)—the country’s dominant players. Other groups, however, find themselves marginalised. In the 1970s and 80s different voices start to speak out … By the century’s end, many diverse groups have a say in New Zealand society and politics. ‘They’ have become part of ‘us.’

Who is this new “us”? The Essential Guide to Te Papa defines the new “Kiwi identity” as someone who sees unity and values diversity: “Kiwis live in a broadly egalitarian society and believe that everyone deserves a ‘fair go.’ … Widespread protests have reflected Kiwis’ willingness to oppose injustice or back a principle … Kiwis have grown wings—many have travelled extensively or lived in other countries … [But] Kiwis retain a strong identity … Home or abroad they feel a strong affinity with the land.”

The assertion of unity in diversity is, admittedly, a common theme in many forward-looking museums. It is the master narrative of the Smithsonian’s National Museum of American History, where citizen groups historically unite across differences to forge “a more perfect union.” In today’s divisive times, unity-in-diversity is a good message—but it can also become so much pablum, a broadly pleasant statement that all can agree with but few need to act upon.

The Te Papa goes further. Its new Pacific Islander exhibit, for instance, asks visitors to consider a fundamental aspect of their own identity: “Aotearoa [New Zealand] is a Pacific place in location and history. But do New Zealanders consider themselves Pacific Islanders? Do you?” And in a central section of the museum hangs a key artifact of the museum: The Treaty of Waitangi, an 1840 agreement between the British Crown and Maori chiefs. Largely ignored for more than a century, its provisions, which took much from the Maori, have been used since the 1970s as a template to redress breaches of Maori rights. In the new New Zealand it has assumed the role of a foundational document.

Museums, if well designed, can provided rare public spaces where different people from the same place can engage thoughtfully with the basic questions of who we are, what we value, and, therefore, what we may be willing to do next.

In Te Papa, signage informs visitors that the Treaty deals with “ideas vital to modern New Zealand,” and New Zealanders today walk in with an understanding of the Treaty principles learned in school. Yet it also points out that the document is still controversial, its purpose in the modern nation still a matter of debate. The Treaty, therefore, is surrounded by speaker poles broadcasting the voices of different people debating the treaty. Some voices praise it as transformational to New Zealand society in righting old wrongs, while others wonder if society has gone too far in protecting Maori rights and redressing legal disputes over land/resources. Do the values the Treaty represents embody the “fair go” of Kiwi identity, and if so, what should happen next? Allowing this new story to be debated within a museum that celebrates points of national commonality means that debate is not seen as antithetical to nationhood. What divides can be discussed—and so the work of persuasion is ongoing.

The divided United States might learn from this example. In fact, these lessons are already being applied in some surprising places. Just last month I visited the Minuteman Missile National Historic Site in Philip, South Dakota. For the past 20 years, the site has told the story of the mutually assured destruction of the Cold War. The missiles scattered throughout the Dakotas “[hold] the power to destroy civilization, but [are] meant as a nuclear deterrent to maintain peace and prevent war,” the National Park Service introduction says.

Thirty years ago I spent my college years active in the Nuclear Freeze movement; when I visited the museum last month I happened to be sharing a guest house with a Cold War-era member of the U.S. military, and both of us found the exhibit surprisingly balanced. Both of us, in fact, spent the next morning persuading a young Russian guest to stop at the exhibit as well—which, we both assured our new friend, included a surprisingly significant recounting of Russian perspectives.

The site’s exhibit manages to cover not only the obvious divisions of that time—mistrust and miscommunication, hysterical ideology—but also the less-discussed commonalities that included the mutual fear of global annihilation and how it shaped identity on both sides of the Cold War. It begins with the bravura of cold warrior missileers (“Minuteman II: World-wide delivery in 30 minutes or less” boasted a hand-painted silo door in the shape of a pizza box), but ends with the sobering placard “Too Close for Comfort”—five narratives of specific dates when accidents and false alerts “came close to ending the world as we know it.”

Most crucially, the site asks its visitors to think, with panels posing questions ranging from “Would you do your duty?” to “Do you think nuclear weapons make the world more safe? Less safe?” At the very end, a prominently placed guest book invites visitors’ thoughts on all these questions.

Reading through comments from just the day I was there, I saw diverse opinions, rather like the Treaty of Waitangi speaker poles: “It was a scary time growing up in Washington, DC.” “Nuclear weapons are only safe if put in the right hands.” “I grew up in Finland in the ‘80’s … It was a source of constant anxiety.” “The strategy succeeded for all of humanity. Would a strategy without Minuteman have been successful?” “Nobody wins.” “Kill em all and let God sort em out! Trump 2020.” “Never again, please.”

A Swiss visitor nicely summed up the purpose of the book, and the exhibit, in German (my translation): “There were a lot of interesting comments … some I do not agree with, but it is very cool that it was free!” I like to think he meant both “free” access (there is no admission charge) and “free” debate. Did this small museum change my opinion on nuclear weapons? No. But it left me better able to have a real discussion with someone who believes in their necessity.

In today’s heterogeneous societies, public speeches and pageants are too homogeneous and too propagandistic to unite people. When societies know they are divided, one response is to let those differences rest side by side. But a more nuanced response, demonstrated by some of the world’s best heritage museums, is to seek to consider competing and difficult ideas together. Museums, if well designed, can provided rare public spaces where different people from the same place can engage thoughtfully with the basic questions of who we are, what we value, and, therefore, what we may be willing to do next.