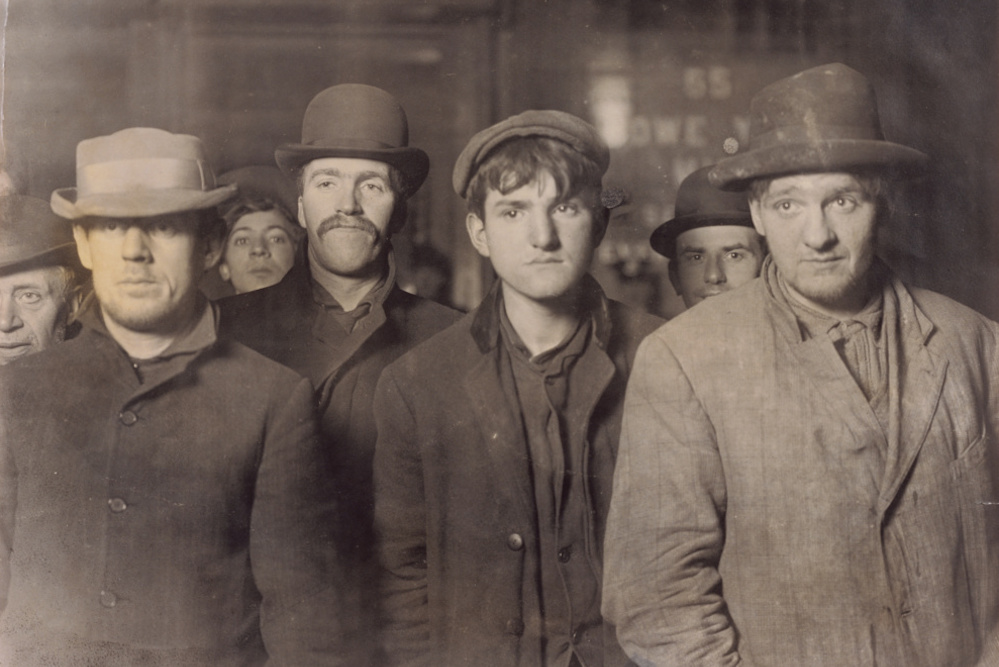 Men await free bread and coffee distributed to the homeless and unemployed at the Bowery Mission in NYC. Photograph taken by Lewis W. Hine around 2 AM, 1906. Courtesy of Samuel Wagstaff, Jr./The J. Paul Getty Museum.

On May 10, 1900, the Navy steamship Quito sailed from Brooklyn, New York, to deliver 5,000 tons of corn and seeds to the “starving multitudes” of India. This “great work of rescue” was the brainchild of Louis Klopsch, proprietor of the Christian Herald—the most influential religious newspaper in the United States. Since his purchase of the publication in 1890, the enterprising Klopsch and his editorial partner, the charismatic Brooklyn preacher Thomas De Witt Talmage, had combined scriptural injunctions about charity with emerging technologies of modern journalism—gripping headlines, heartrending reporting, and graphic photographs of suffering people—to convince readers that aiding the afflicted was the obligation of every American.

Although we’ve forgotten his name, Klopsch and the Christian Herald fostered a popular movement of faith-based philanthropy that rivaled the achievements of competing humanitarian agencies like the American Red Cross and provided a sharp contrast to another trend in American giving at the time: the rise of scientific philanthropy, championed by Andrew Carnegie. During its heyday, the Christian Herald engaged ordinary citizens from across the U.S. in efforts to assuage all kinds of adversity: from homelessness among New York City’s unemployed to poverty among formerly enslaved people in the American South; from disease and destitution among survivors of massacres in Armenia to hardships following natural disasters in India, China, Scandinavia, Macedonia, Japan, Italy, and Mexico. By the time Klopsch died in 1910, Christian Herald subscribers had donated over $3.3 million (equivalent to approximately $89 million in 2019) to domestic and international causes. No other relief organization in this period came close to matching its fund-raising record or ability to arouse popular concern for suffering.

Key to Klopsch’s success in making the Christian Herald “a medium of American bounty to the needy throughout the world” was his insistence that philanthropy was not the province of the privileged elite but a popular practice in which all citizens ought to participate. In a humanitarian crisis, each dollar made a difference—even a nickel could buy a loaf of bread. Every person who could spare a penny should share with sufferers in distress.

By democratizing philanthropy, the Christian Herald’s campaigns made charity a distinguishing mark of American character, Klopsch contended, and helped unify an increasingly diverse population. The common enterprise of serving others, he argued, let people overcome political disagreements, social prejudices, economic antagonisms, regional animosities, cultural conflicts, and religious discord—all of which were on the rise in the late 19th and early 20th centuries as Americans argued over immigration, race, income inequality and labor unrest, imperialism, women’s rights, evolution, and the Bible. Whatever their differences in these arenas, Klopsch insisted, surely American citizens could unite around the commandment: “You shall love your neighbor as yourself.”

The Christian Herald was particularly well-positioned to build solidarity, Klopsch asserted, because the newspaper avoided controversial subjects, attracted subscribers from all across the U.S., and appealed to adherents of many different denominations. Although the overwhelming majority of readers were white Protestants, the editors took pains to include stories about African American churches and charities, to report on the plights of Native Americans and Asian immigrants, to highlight the work of Jewish philanthropists, and to build bridges with Catholics. At a time when many Protestant leaders supported racial segregation, expressed anti-Semitism, and accused the Pope of conspiring to take over the United States, the Christian Herald’s ecumenism was noteworthy.

Klopsch’s sympathy for the downtrodden “whatever their color, race, or religion” stemmed from his own experiences. As a young man, he was forced to quit school to help support his struggling immigrant family. When run-ins with the law landed him in jail, he came face-to-face with men of many different backgrounds for whom crime had seemed the only means of providing food for their wives and children. These encounters prompted Klopsch to empathize with those whose misfortunes contributed to their distress, dissipation, or even delinquency.

“There is no depth of human misery and degradation so low that it cannot be reached by the love of Christ,” he concluded. Everyone deserved a second chance.

After his release from prison, Klopsch strove to put these convictions into practice. While working to establish himself in the newspaper industry, he began teaching Sunday School at Talmage’s church. He soon formed a friendship with the popular minister, and the two devised a plan to acquire the Christian Herald and accomplish “many good works” by publicizing humanitarian crises and urging readers to help the poor. Klopsch landed at “the front in almost every national and international enterprise of benevolent or humane character,” his biographer wrote; his energetic outreach and innovative methods “gave the man and his journal the highest imaginable prestige, and put the Christian Herald upon a pinnacle of popularity as an organ of wide-spread humanitarianism.”

Key to Klopsch’s success in making the Christian Herald “a medium of American bounty to the needy throughout the world” was his insistence that philanthropy was not the province of the privileged elite but a popular practice in which all citizens ought to participate.

Yet even as Klopsch persuaded many that being American meant serving those in need, not everyone agreed with his ideas. Klopsch faced criticism from those who believed that charity perpetuated poverty. Many of his contemporaries insisted that indigence was the product of indolence, intemperance, or iniquity. Wealth came to the worthy who worked hard, stewarded resources wisely, and lived virtuously. Although mishaps might sometimes cause unmerited hardship, most often the destitute were responsible for their distress. According to this logic, providing disaster assistance was permissible (as long as the damage could not have been avoided through better preparation), but aiding the poor ought to be prohibited. Helping those who refused to help themselves encouraged a “vicious and willful pauperism” that would only “increase in proportion to the relief provided.”

One of the most prominent advocates of this position was industrial magnate Andrew Carnegie. In a series of essays published just prior to Klopsch’s purchase of the Christian Herald, Carnegie chastised practitioners of “so called charity” who gave assistance to “the slothful, the drunkard, the unworthy.” Aiding such reprobates, he argued, interfered with “the survival of the fittest” and posed a “serious obstacle to the improvement of our race.” Rather than risk abetting “irreclaimably destitute, shiftless, and worthless” beggars through “the practice of indiscriminate giving,” philanthropists should distinguish between the deserving and the derelict—or, even better, avoid almsgiving altogether and instead invest in institutions that would place “within reach ladders upon which the aspiring can rise”: public parks, free libraries, universities, music halls, art galleries, bathhouses, and churches.

Carnegie’s “Gospel of Wealth” inspired the growth of scientific philanthropy, an influential movement that developed systematic processes for segregating the meritorious from the miscreants. Charitable organizations that adopted this approach required the needy to apply for aid. Investigators interviewed candidates, asking about their work habits, health, spending patterns, housekeeping, children’s education, and even religious practices. Sometimes “Friendly Visitors” would call on supplicants in their homes to confirm that the information they provided was accurate and their needs were genuine. Petitioners judged worthy might receive monetary assistance. Those found wanting were offered training in self-reliance, or deemed intractable and cut off from any support.

As scientific philanthropy gained authority, the Christian Herald’s work came under increasing attack. When the Quito sailed for India, critics questioned sending aid to people who might be responsible for their own plight. The famine, some suggested, was the product of “improvident” choices made by “backward” peasants who failed to adopt modern irrigation techniques or “sow their seed at the proper season.” The Christian Herald’s sponsorship of domestic charities also troubled detractors. The newspaper’s support for New York City’s Bowery Mission—an organization that provided food and shelter for the hungry and homeless—drew especially virulent condemnation from “professional philanthropists” who charged that breadlines, soup kitchens, and “indiscriminate doles” attracted “tramps, panhandlers, and vagrants” who refused honest work in favor of free handouts.

Klopsch refuted these allegations. Although he and his colleagues at the Christian Herald acknowledged that modernizing agricultural methods might mitigate food shortages in India and elsewhere, they insisted that providing emergency relief to famine sufferers was a moral and spiritual duty. And while they conceded that scientific methods could improve efficiency in philanthropy, they repudiated the claim that charity encouraged delinquency. Klopsch knew from personal experience how difficult it was to get by in a volatile economy with few social safety nets. “What ‘pauperizes the people,’” he proclaimed, “is not the helping hand they occasionally get at a pinch from their sympathetic brothers and sisters, but low sweatshop wages, exorbitant rents, high prices for food … wholesale enforced idleness, privation and sickness. For how much or how little of this the poor themselves are responsible any fair-minded person can judge.”

Rather than blaming the needy for their penury or condemning the Christian Herald for trying to help, Klopsch argued, proponents of scientific philanthropy ought to recognize that the “real root of the problem” of poverty lay in structural inequalities. If anyone was to be held accountable for suffering, it was greedy industrialists who amassed colossal fortunes by extracting resources from colonized peoples, paying employees a pittance, and inflating prices. Instead of building colleges, libraries, and other institutions designed to “uplift the masses,” Klopsch and his associates suggested, millionaires like Carnegie should expand employment opportunities, offer higher salaries, and support legislation to ensure fair labor and living conditions.

Throughout his tenure at the Christian Herald, Klopsch endorsed social reforms, legal regulations, and religious enterprises designed to redress the adverse effects of laissez-faire capitalism. In his later years, he promoted the platform of “Christian Socialism” put forward by the Rev. Charles Sheldon, who coined the slogan “What Would Jesus Do?” This ambitious program called for substituting cooperation for competition in commercial enterprises and instituting “common ownership of … common needs” such as transportation facilities, heating and electric utilities, water and food sources, and health care in order to create “a new and different order of social life” based on “the teaching of the Golden Rule and the Sermon on the Mount.”

None of these proposals came to fruition during Klopsch’s lifetime—and after his death, the establishment of large philanthropic foundations, the professionalization of social work, the expansion of the welfare state, and the federalization of foreign aid diminished the Christian Herald’s stature as a premier humanitarian aid agency.

The newspaper ceased publication in the 1990s, but the issues it raised persist. Today’s debates about poverty assistance, immigration, and global inequality reveal that Americans remain divided over who deserves help and the best ways to create a just society. Still, Klopsch’s legacy lives on among the millions who believe that alleviating affliction is the moral obligation of every individual and carry forward Klopsch’s conviction that the gospel of grace trumps the gospel of wealth.