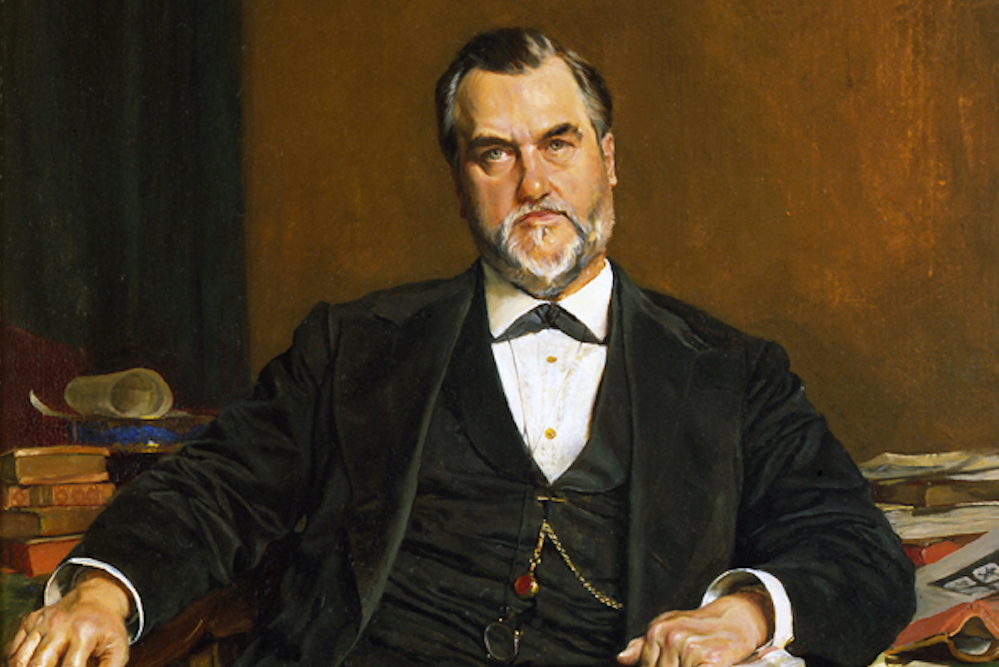 Born in his father’s East Coast backwoods bar, dying in a magnificent West Coast mansion built from his self-made fortune. Condemned as the complete robber-baron, consecrated as a singular titan of American enterprise. Exalted as the magnanimous founder of a world-class university, damned as a thief, liar, and bigot.

With all of the stark contradictions in his character, Leland Stanford—a man best known as a railroad magnate, California governor, and putative philanthropist—embodies American typecasts that have bedeviled us for centuries. Today’s infamously disruptive, get-rich-quick, world-altering, ill-mannered, entrepreneurial culture traces directly back to this enigmatic, mythical man.

He had a quintessential American provenance. His earliest American ancestor arrived in New England a few years after the Mayflower moored at Plymouth Rock. A later Stanford fought in the Revolutionary War. (That ancestor’s widow had to fight the government to get his pension. How American is that?) Stanford’s people moved west to what is now Albany, New York and ran a bar called the Bull’s Head tavern, where he was born in 1824.

Leland’s real first name was Amasa, after a troublesome Old Testament figure who joined a failed rebellion against his own uncle, the duplicitous warrior king, David. Leland dropped Amasa in favor of his benign middle name—which means meadow, although Stanford was hardly so open and agreeable.

He spent most of his life altering himself, moving about, shifting. And he failed at just about everything. As a student, he was a repeated dropout who never graduated from what today would be high school. He claimed to have passed the New York State bar, but the record indicates he did not. He was, not surprisingly, a classic American anti-intellectual, who disparaged people with better educations. Later in life he liked to boast that he hired Harvard and Yale graduates to run his San Francisco street cars, his point being they had wasted their time at university.

By the time he was 28, Stanford was dead broke. Letters, manuscripts, and other documents reveal he fled in 1852 to California, where his brothers had already established a successful retail business. With understandable skepticism, the brothers sent Stanford up to the mountainous Gold Country to open a branch store, to see how he would do—and for the first time ever, he did fine. He got himself appointed local justice of the peace, opened a bar he called the Empire Saloon to honor his New York tavern past, and used the joint to dispense justice and liquor.

When the brothers moved out of their Sacramento headquarters and on to other enterprises, Stanford came back down the hill to take over—and met the partners who would help him accrue his vast wealth. A hardware store next door was run by two successful entrepreneurs named Collis Huntington and Mark Hopkins. Another prosperous merchant of carpets and shoes by the name of Charles Crocker worked just around the corner. These men recruited young Stanford into one of the biggest, most audacious gambits in American history: financing and building the transcontinental railroad.

The new-found associates—soon to be forever known as the Big Four—made Stanford titular head of their start-up, the Central Pacific Rail Road, and secured a contract to build the western end of the rail line, to be financed largely by American taxpayers. The money was supposed to be paid back in 30 years.

Almost a year, hundreds of witnesses, and some 6,000 pages of testimony and conclusions later, the commission found Stanford and his people had lied to and defrauded the American people. “I have never seen vouchers in such a state before in my life,” an independent expert accountant with 30 years’ experience working for railroad companies testified. “They are all in disorder, and nine-tenths of them are merely scraps of paper without receipts.”

Almost immediately, Stanford and his partners began a ceaseless—and successful—campaign to get still more money out of American taxpayers. They set up dummy companies to launder the proceeds into their own accounts, effectively hiding their true expenses and profits. Consequently, they began amassing great power. The Big Four, riding the coattails of Abraham Lincoln’s victorious 1860 election, engineered the election of Stanford, a Republican, as governor of California in 1861.

Becoming governor awakened something in Stanford, and his all-American paradoxes and opportunities began working in singular rhythm. He conflated government service with personal profit, and began bullying the state legislature, local counties, and cities to issue bonds to further fund his railroad and, by extension, his fortune. The railroad construction itself was borne largely on the backs of the pariahs of the time: Chinese immigrants, whom Stanford denigrated, along with Native Americans and others. The Big Four paid their Asian laborers less than their white workers and demanded much more of them as the project crossed the formidable Sierra Nevada and the scorching desert.

This was the mid-19th century American success story—four men had traveled west and struck figurative gold. But not many people knew what was really happening behind the mythic narrative, and of course, no one knew what consequences it would bear.

Leland Stanford would soon become embroiled in scandals, including one of the greatest in American history.

The eastern end of the transcontinental railroad—a scandalous enterprise in itself—met the Stanford group’s western end at Promontory Summit, Utah, in 1869. Stanford and partners then raced to acquire every railroad in California and much of the West. Their monopoly exploited freight and passenger customers, charging outrageous prices and laundering the profits through veneer corporations. Furthermore, Stanford declared that his company should not have to pay back the loans to American taxpayers. A series of subsequent state attempts to investigate the railroad, which would soon change its name to the Southern Pacific, failed in large measure because Stanford bought off the so-called investigators. 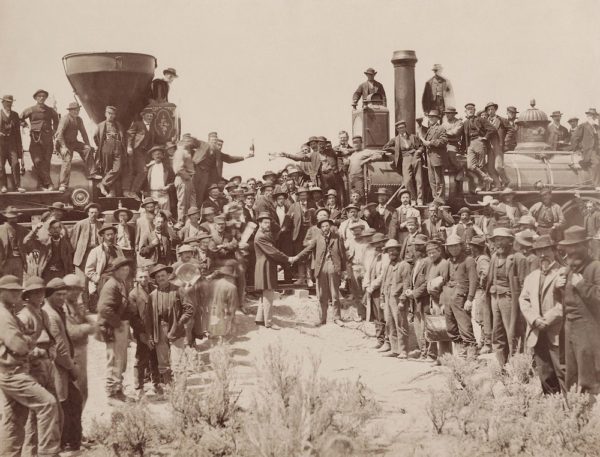 Leland Stanford drove in the golden spike, connecting the Central Pacific Railroad with the Union Pacific Railroad and marking the completion of the transcontinental railroad line, on May 10, 1869, at Promotory Summit, Utah. Photograph by Andrew J. Russell. Courtesy of Wikimedia Commons.

A fed-up federal government finally stepped in. In 1887, Congress created the Pacific Railroad Commission, “authorizing an investigation of the books, accounts, and methods of railroads which have received aid from the United States.” That launched a sweeping and granular investigation into the businesses at both ends of the transcontinental railroad, starting with the Stanford group.

Almost a year, hundreds of witnesses, and some 6,000 pages of testimony and conclusions later, the commission found Stanford and his people had lied to and defrauded the American people.

“I have never seen vouchers in such a state before in my life,” an independent expert accountant with 30 years’ experience working for railroad companies testified. “They are all in disorder, and nine-tenths of them are merely scraps of paper without receipts.”

The investigators found that millions of dollars had been “used for the purpose of influencing legislation and preventing the passage of measures deemed to be hostile to the interests of the company, and for the purpose of influencing elections.” In other words, the Stanford group had used millions of government money dollars to fight the government.

But that wasn’t the best—one should probably say the worst—of it. Essential accounting books that would have shown exactly where taxpayer money went had simply disappeared. Vanished. Vamoosed. “These books were not produced, and in the opinion of the Commission, were purposefully destroyed by direction of Stanford, Huntington, Hopkins, and Crocker. The evidence on this point appears to be conclusive.”

“The result,” the commission determined, “is that those who have controlled and directed the construction and development of these companies have become possessed of their surplus assets through issues of bonds, stocks, and payments of dividends, voted by themselves while the great creditor, the United States, finds itself substantially without adequate security from repayment of its loans.”

The Big Four made an estimated $62.6 million “surplus” on transcontinental railroad construction and a similar $55.5 million from the other many railroads they controlled, the commission concluded. For some context of what that money was worth in 1887, the California state budget that year was about $6 million (It’s over $200 billion today). The United States government couldn’t sue the railroad at that time because the debt was not yet officially due, and stockholders wouldn’t sue because they would likely lose their investments.

When Stanford got fed up answering the commission’s increasingly tough questions, he simply shut down, saying he had no knowledge, didn’t recall, or would not answer on advice of counsel. The commission brought him to court. In 1887, two members of a panel of three judges—personal friends of Stanford’s whom he had appointed to the bench—ruled against Congress and for Stanford.

He had won, but his fortunes would soon turn. The next year Stanford and his underestimated wife Jennie suffered the greatest loss imaginable. Their beloved only child, Leland Jr., died during a Grand Tour of Europe at age 15. The parents set out to memorialize him with the establishment of a university on their vast country estate in Palo Alto.

A few years later, Leland Sr. was betrayed by his business partner Huntington, when the wily old hardware store salesman engineered a corporate coup, had Stanford deposed as head of the railroad, and assumed the presidency himself. Huntington remained in the position for the rest of his life.

This American story of failure, reward, tragedy and duplicity has a tragic coda: murder.
Eight years after Leland Stanford died in his Palo Alto country mansion, on the brink of bankruptcy, his unassailable widow Jennie, who had saved Stanford University from shutting down by successfully fighting all the way to the Supreme Court for the return of a government loan, was murdered in a luxurious Honolulu hotel room. A coroner’s investigation found someone had purposefully poisoned her with pharmaceutical-grade strychnine.

The president of Stanford University, David Starr Jordan, made sure the investigation went nowhere—he could not afford to let another scandal rock the young, fragile institution. The killer was never discovered. And the university would go on to be a force for altering lives around the planet, as birthplace, incubator, and sustainer of Silicon Valley.

Today we often hear American stories of corporate chicanery, political fraud, coverups and crime—and they coexist with tales of our fathomless capacity for ambition, invention, and philanthropy.

Leland Stanford led the rare life big enough to contain them all.