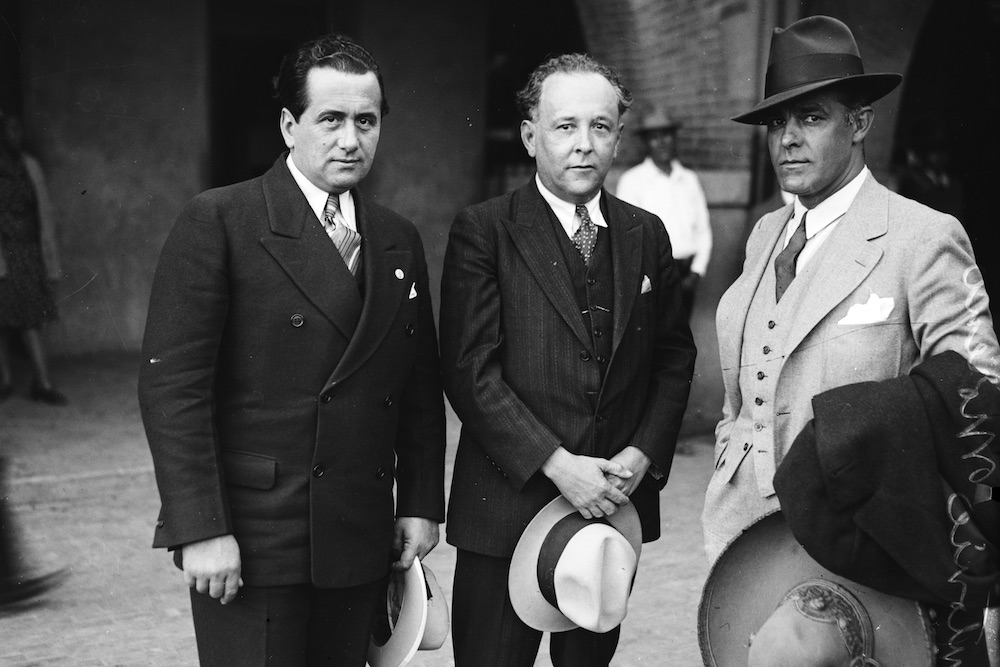 Mexican tenor Alfonso Ortiz Tirado, La Prensa publisher Ignacio Lozano, and Hollywood actor Antonio Moreno pose for a photograph on the occasion of a performance to benefit the Mexican Clinic in San Antonio. Courtesy of the San Antonio Express-News.

The Trump administration’s endless, bigoted campaign against immigrants may seem shocking. But the rhetoric accompanying that campaign, down to the metaphors comparing immigrants to small, loathsome animals, is nothing new. Much of what we hear today echoes opinions like the ones expressed in that editorial, published in the San Antonio Light, during the early years of the nation’s worst economic downturn, the Great Depression.

William Randolph Hearst’s own eugenicist views were proliferated throughout the newspaper titan’s media empire, which included the San Antonio Light. Hearst, who, as Fortune noted, owned “the biggest pile of newspapers in the world,” had a platform that reached an estimated 5 million daily and 7 million Sunday subscribers in major American cities.

In San Antonio, the Hearst editorial messages reverberated through both English- and Spanish-language media. The Light’s “vermin” editorial, along with its other anti-immigrant diatribes, were at once xenophobic and ironic, as they were published in a city that represented the crucible of Spanish-colonial culture and the U.S.’s Mexican American future. These immigration arguments, however, were far from parochial—they were regional, national, and even transnational. In turn, they made San Antonio’s print culture a case study for the nation’s immigration debates of that day—as well as our own.

While media technology was very different in the early 1930s, at least one important thing was the same then as now: News organizations were divided into camps with polarized ideas about who might be considered American. Many newspapers, including the Spanish-language outlet La Prensa, met the Hearst attacks with equally vociferous counternarratives extolling the virtues of immigrants to the United States.

In examining the 1930s back-and-forth between the news camps, something emerges that might be called “the mediated immigrant.” Unlike the real-life immigrant, composed of flesh and blood and known through personal experience, the “mediated” or “newspaper” immigrant is constructed of the themes, narratives, and rhetoric that U.S. broadsheets and tabloids offered their readers.

In Hearst’s newspapers, Mexicans were vicious criminals who constituted vermin. On La Prensa, Mexicans were indigenous heroes who conquered vermin. For the San Antonio Express, the immigrant was a critical economic component whose existence Texas depended upon to thrive.

San Antonio was a perfect environment for cultivating this mediated immigrant. There, the arguments over immigration weren’t theoretical; the United States was in the process of kicking hundreds of thousands of immigrants out of the country, and Texas sat at the center of the story.

During the Great Depression, approximately 500,000 jobless Mexicans and Mexican Americans were repatriated to Mexico, courtesy of city and county governments nationwide. The formal and largely voluntary repatriation program—which required immigrants to process through local Mexican consulates—was the gentle way to go. Many people were rounded up by law enforcement and deported after a court hearing.

As a result, hundreds of thousands of Mexicans and Mexican Americans, some who had never lived in Mexico, were forced from the United States through Texas, whose 1,254-mile frontier with Mexico is the longest of any U.S. border state. Caravans of hundreds of immigrants crossed the state as they fled with their worldly goods and farm animals packed up or tied to cars, trucks, and horse-drawn wagons. Others poked their heads out of train windows, taking in the dry, dusty landscape of Texas—their last view of the U.S. home they were leaving for an uncertain future in Mexico.

It was an exodus of biblical proportions. Yet the actual story received scant news coverage in papers such as Light, whose editorial page preferred broader, bigoted denunciations.

Meanwhile, the independent English-language San Antonio Express—a powerhouse which represented the Southwest’s banking, ranching, and railroad interests and their investments in Texas’s economic, cultural, and social relationship with Mexico—focused its reporting not so much of farmworkers being removed, but of their employers, U.S. farmers and ranchers, who were suddenly left with fruit and vegetables rotting in fields, and chores undone. The Express’s editorial page campaigned against legislation being debated in Congress that for the first time would restrict Mexican immigration, arguing that Mexicans did “work native white men generally will not do.” In making this argument, the Express called Mexicans “indispensable,” even as it marked them as racially distinct.

It was left largely to La Prensa to convey the exodus’s human dimension, including the starvation and poverty that befell many when they returned to an economically paralyzed Mexico.

Under the Mexican immigrant publisher Ignacio Lozano, La Prensa had become the foremost exemplar of Spanish-language news in the country. Founded in 1913, it circulated in almost every state in the nation, and also in Mexico. Its sister publication, La Opinión, which Lozano started in Los Angeles three years before the stock market crash of 1929, is still in business today. Through his news outlets in these two major American cities founded by Spanish-speaking immigrants, Lozano would help define what it meant to be Mexican and American.

La Prensa emerged as a champion of Mexicans in the face of attacks during this period of forced migration. For instance, one U.S. official in El Paso—referred to only as one “high North American bureaucrat”—characterized the Mexican deportees as “‘lunatics,’ demented people, and prostitutes,” providing a veneer of justification for their removal. La Prensa was quick to report the Mexican consul general’s protests of the smear.

Likewise, La Prensa sprang into action when John C. Box, a congressman from East Texas and a leading proponent of closing the door to Mexican immigration, complained in the language of white nationalism about the “Mexican peon population … injuring farmers and farm life and working and middle class Americans of every group” as well as “injuring public health, burdening charities.”

Countering this image of Mexicans as weak, undesirable, and racially inferior, La Prensa quoted Texas railroad builder Col. Samuel Robertson’s homage to the Mexican role in developing Texas: “Neither the Americans of the pure white race, Englishmen, Welshman … not even the negroes could have opened these lands, infested with snakes, coyotes and vermin; no race other than the Mexican has been macerated in the hands and legs, by the strong spines of the cactus; these workers of Indian blood are forgotten heroes who have made civilization possible in the [Rio Grande] Valley.”

Through this vivid prose of the early 20th-century press, the mediated immigrant took on a form still recognizable today: In Hearst’s newspapers, Mexicans were vicious criminals who constituted vermin. On La Prensa, Mexicans were indigenous heroes who conquered vermin. For the San Antonio Express, the immigrant was a critical economic component whose existence Texas depended upon to thrive.

However they were characterized, as La Prensa assured its readers, Mexicans would remain a part of the nation. Presciently, and on its front page in a banner headline, the paper offered the most vigorous rebuttal to the anti-Mexican hysteria that fueled calls for limiting immigration from Mexico, when its columnist Rudolfo Uranga declared:

There will always be Mexicans in the United States, whether temporarily or permanently … Even though some anti-Mexicanists and xenophobes shout furiously for their removal and exclusion … they will not achieve it because it is no longer possible in our century.

Uranga wrote those words in 1929. Now almost a century old, his writing carries all the more relevance.