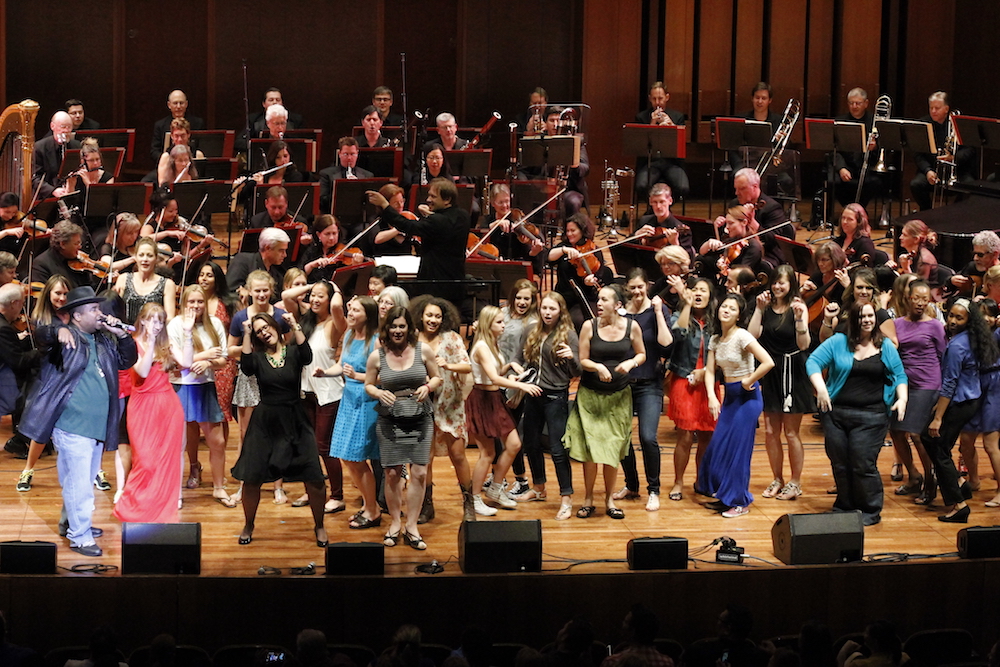 Women rushed the stage during Sir Mix-a-Lot's 2014 performance of "Baby Got Back" with the Seattle Symphony Orchestra. Photo by Ben VanHouten.

Throughout 400 years of the nation’s history, street dance has always been a tool for Americans who lack the social power to resist and seize control of public spaces. In more recent times, the subversive power of dance can be understood through the story of Sir Mix-a-Lot’s breakout 1992 hit, “Baby Got Back.”

Like many hip-hop artists in the ’80s and ’90s, Sir Mix-a-Lot, a Seattle-based rapper born Anthony Ray in 1963, developed a diversified career out of early success in the niche market of a regional rap scene. With “Baby Got Back,” from the 1992 album Mack Daddy, Mix created a cross-market anthem.

The song and its accompanying music video in praise of the backsides of curvaceous women broke new ground. In an age before Kim Kardashian or the dance style of twerking made it acceptable for a white middle-class fan base to celebrate the posterior, “Baby”’s paean to that specific part of the female anatomy was seen as so salacious and exploitative that the video was even briefly banned by MTV. (The footage was deemed not suitable for a channel aimed at a youth market.)

In hindsight, “Baby” can be seen as a great novelty record—in the venerable R&B tradition of “blue” records like 1954’s “Work With Me, Annie” and “Annie’s Aunt Fannie.” Simultaneously, it also serves as a sly parody of dominant culture’s beauty norms, as the expectations for how women “should look” in pop music were directly confronted—quite intentionally—by Mix’s text, rap, and video.

But “Baby” didn’t just reflect a shift toward more inclusive body images—it, in fact, helped bring about that change.

In the late ’80s, mainstream women’s beauty magazines like Vogue and Cosmopolitan—as well as music videos by rock bands like Whitesnake, Ratt, and Bon Jovi—objectified big-haired thin-hipped Caucasian models. “Baby Got Back”’s idea of celebrating contrasting body types among women was, in and of itself, revolutionary—but what made it all the more so was that Mix was explicit in saying that “Baby” represented a celebration of black and brown female bodies.

In stark contrast to the ornamental white models in mainstream rock videos of the period, the women in “Baby Got Back” are not posed semi-nude around the frame like appliances or trophies. Instead—as was common in hip-hop videos and live dance of the period—the women in the video serve as a powerfully physical, visible, and independent counterpoint to the rhythm track.

The “Baby” video was direct in its objective of challenging white female beauty norms. In an echo of the comic “race” or “hillbilly” records of earlier eras, the video begins with a bit of parodic dialog as two teenaged Caucasian actresses observe an African American model in a tight-knit dress through a stylized keyhole:

Oh, my, God, Becky, look at her butt
It is so big, she looks like
One of those rap guys’ girlfriends.
But, ya know, who understands those rap guys?
They only talk to her, because,
She looks like a total prostitute, ‘kay?
I mean, her butt, is just so big
I can’t believe it’s just so round, it’s like out there
I mean gross, look
She’s just … so … black

Then, in an abrupt cut, Mix’s baritone roar enters:

The camera pulls back on Mix in his iconic Mack Daddy leather coat and fedora perched atop a giant abstract peach-shaped pair of honey-colored hills, surrounded by his crew and African American dancers in tight workout shorts.

In stark contrast to the ornamental white models in mainstream rock videos of the period, the women in “Baby Got Back” are not posed semi-nude around the frame like appliances or trophies. Instead—as was common in hip-hop videos and live dance of the period—the women in the video serve as a powerfully physical, visible, and independent counterpoint to the rhythm track. 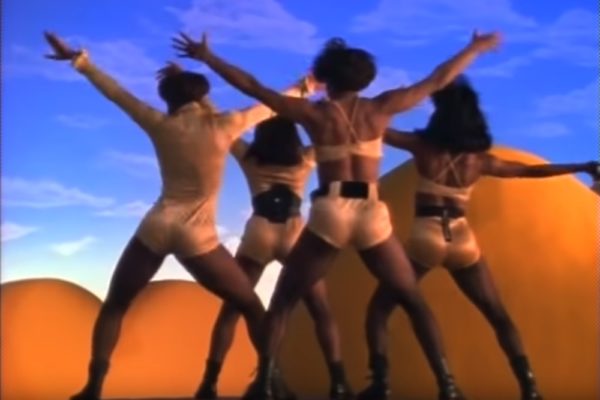 Screenshot from Sir Mix-a-Lot’s “Baby Got Back” music video. Courtesy of SirMixALotVEVO/YouTube.

Certainly, camera angles and editing do not neglect the female posterior. But more significantly, the dancers are depicted as powerful individuals: they interact verbally with one another and with Mix. (When he yells, “Ladies!” they respond, in unison, “YEAH!”—“Ladies!” “YEAH!”) And one climactic moment in the rhythm track, a whiplash electronic crack over a stop-time pause is mirrored in the video by one dancer’s flawlessly executed martial arts side-kick.

“We let each dancer freestyle,” the music video’s director Adam Bernstein told Vulture in a 2013 oral history, “so I would edit in shots coordinated with the song wherever appropriate. One dancer did that great flying kick, and it made sense to sync that shot with the kungfu movie Whopppish! sound in the track.”

The video is loaded with visual references to differing body ideals among women. For example, a short but rich sequence shot in sepia tones references Josephine Baker’s iconic banana skirt, contrasting it with the brassy metallic Aryan bustier designed by Jean-Paul Gaultier for Madonna’s Blonde Ambition tour. (There’s an argument to be made that “Baby” also offers a semiotic debate between two couture-designers’ aesthetics: Gaultier’s statuesque Aryanism and the aesthetic of Goude, who, in the words of Bernstein, the director, “happened to be ass-obsessed.”)

The video also includes repeated visual references to Cosmopolitan magazine and heavy-metal videos, and to the tall, thin, pale female couture models who dominated such media. It even includes a parody of the cover of Cosmo, which is rendered as Cosmo-pygian. Without interfering with the fun, the framing and the content of the “Baby Got Back” video directly confront high-low art dichotomies, white-versus-black aesthetics, and intellect-versus-body oppositions.

I’m tired of magazines
Sayin’ flat butts are the thing …

So your girlfriend rolls a Honda, playin’ workout tapes by Fonda
But Fonda ain’t got a motor in the back of her Honda …

To the beanpole dames in the magazines
You ain’t it, Miss Thing

The entire video—its text, visual imagery, music track, and the interplay of timbres, rhythms, and sampled sounds—is designed to employ street-based dance to push back against dominant-culture body norms.

When “Baby Got Back” exploded on MTV, Mix and its other producers were explicit about the work’s political message: they pushed back against network executives’ timidity regarding both the topic and representation of empowered booties. Patti Galluzzi, who served as MTV’s senior vice president of talent and music at the time, recalls Mix telling her that the song was a response to the constant bombardment of women and girls by images of superthin models in the media. Galuzzi felt the message was political and also personal. “He was also speaking directly to me: I had back and front, then and now. So I said, ‘You know what? I’ll go back to NYC and bring this to the top.’”

During the video shoot, Mix even objected to the skimpy costumes initially intended for the dancers, telling the director, “This song is called ‘Baby Got Back,’ not ‘Baby’s a Ho.’”

Perhaps the most relevant argument in favor of “Baby Got Back” as a subversive statement comes from Amylia Dorsey-Rivas, the song’s original inspiration and voiceover artist. “Even if I’d never contributed to it, I would still have appreciated what it did,” she said for the 2013 oral history of the video. “When people said it was degrading, I would say there’s not one thing degrading about that song to anyone who felt like me.”

Mix affirmed in the piece: “Black women got the song immediately. Everybody [from] my mom, to Amylia, to every black woman I knew or met said ‘about time’ and ‘thank you.’ Girls who didn’t have big butts thought the song was cute, but girls who did have butts thought it was a revolution.”

The subversive politics embodied by “Baby” were, of course, not new. From the defiant, anti-middle-class hobo’s celebration of Mack McClintock’s 1928 “Big Rock Candy Mountain,” to the multiple versions of “Yankee Doodle,” which originated in a 1755 British surgeon’s mockery of “Yankee Simpletons,” and was tussled over as much as any other bit of Revolutionary War contraband, show how song could be a means for those on the fringes to push back against mainstream culture.

Poignantly, “Baby Got Back” also pointed toward the future. In 2013—two decades after the song dropped—Sir Mix-a-Lot returned to his hometown to perform with the Seattle Symphony in its “Sonic Encounters” series, a program undertaken precisely with the intention of drawing in new and more diverse audiences. The tumultuously joyful reception that met “Baby”—and the magnificent diversity of body types among the women Mix invited to rush the stage in celebration—came together to deliver the clearest possible illustration of dance music’s capacity to infiltrate, subvert, empower, and liberate the imagination.