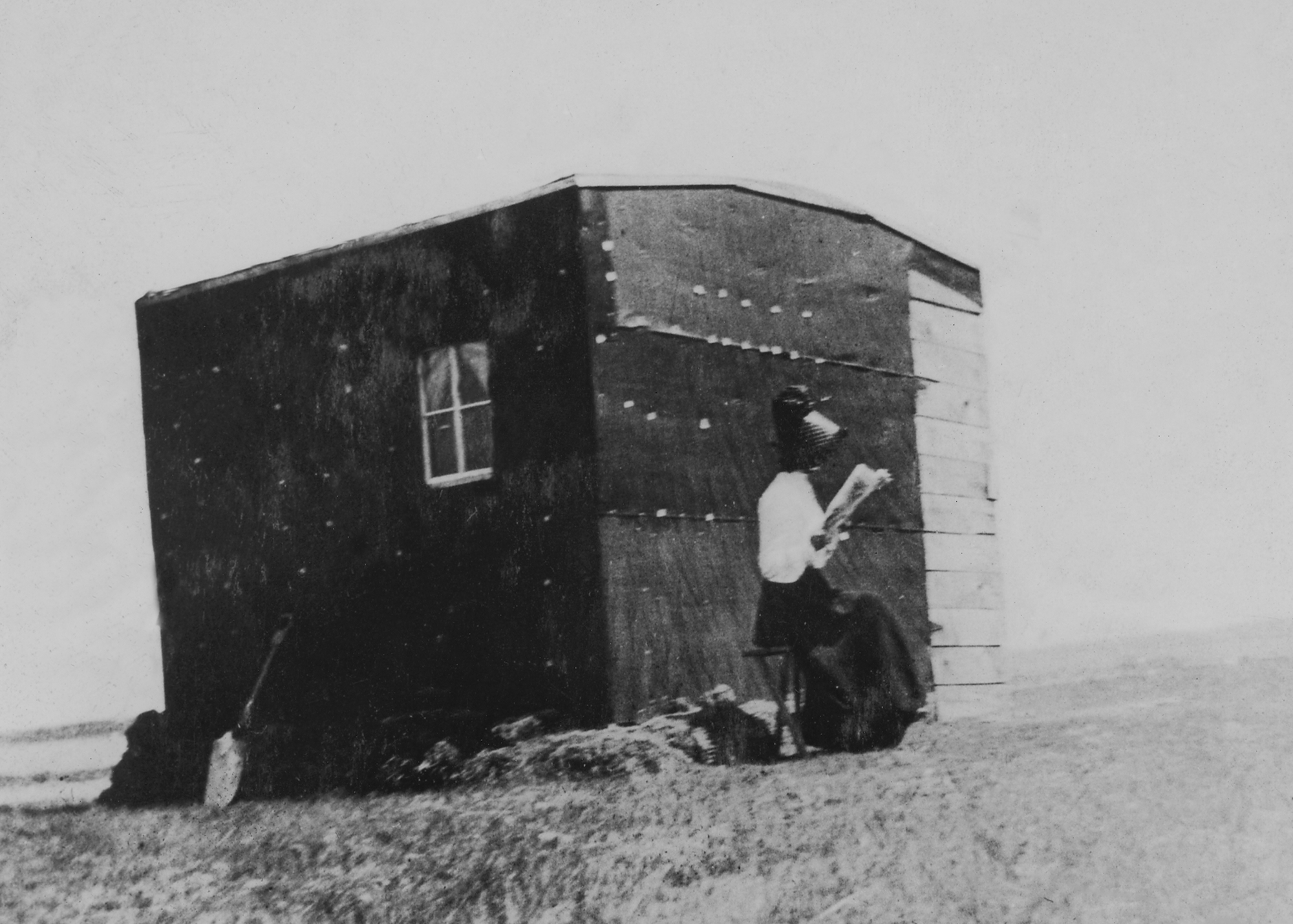 Mina Westbye left Norway for a better life in America. Before her new life began in earnest, she lived in a “claim shanty" in North Dakota, biding her time. Courtesy of Sigrid Lien, private collection. Photographer unknown. 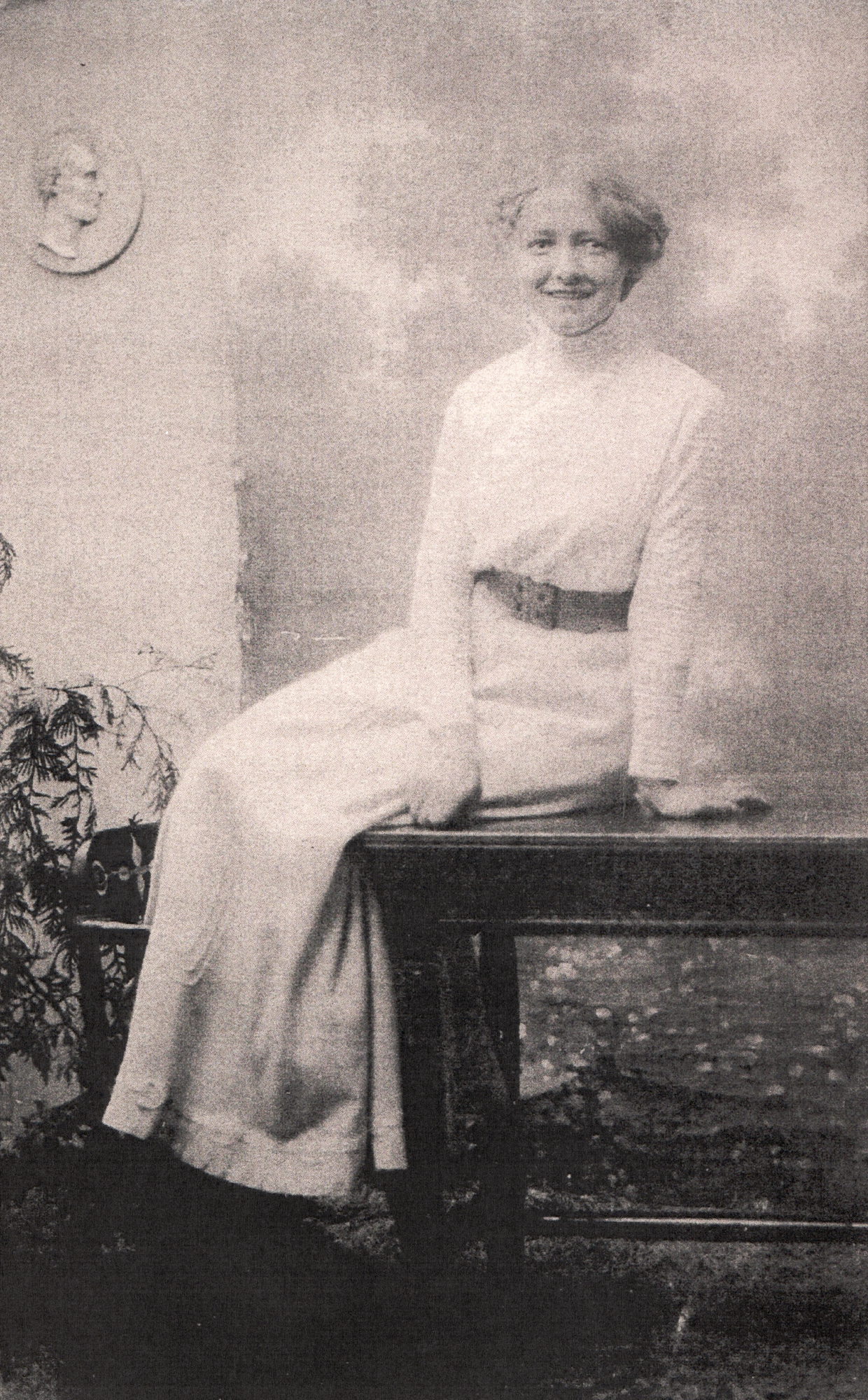 Mina Westbye arrived in the U.S. in 1902, and posed for this picture not long thereafter. Courtesy of Sigrid Lien, private collection. Photographer unknown. 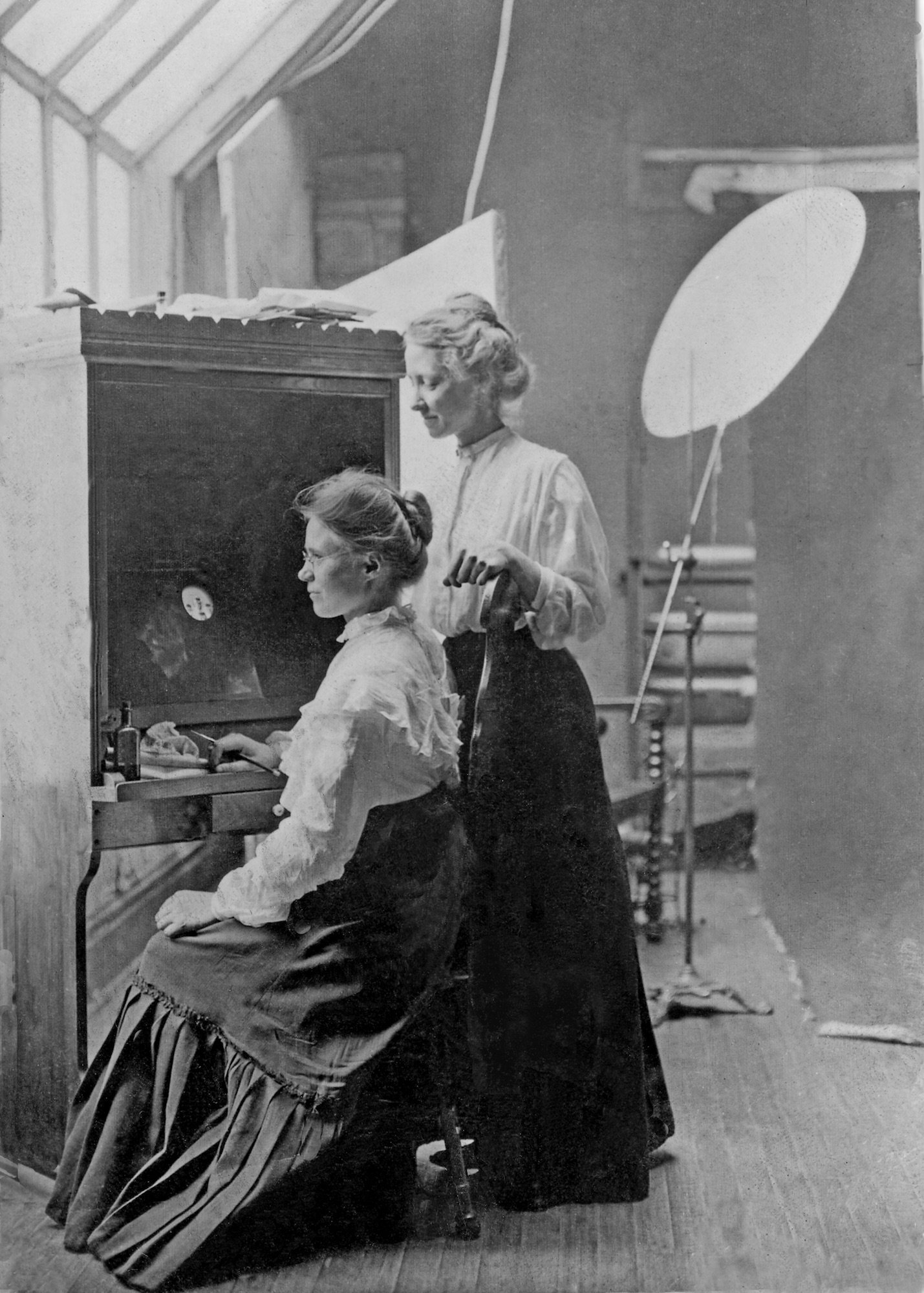 Once settled in the U.S., Westbye worked as a photographer. Here she stands beside a colleague. Courtesy of Sigrid Lien, private collection. Photographer unknown. 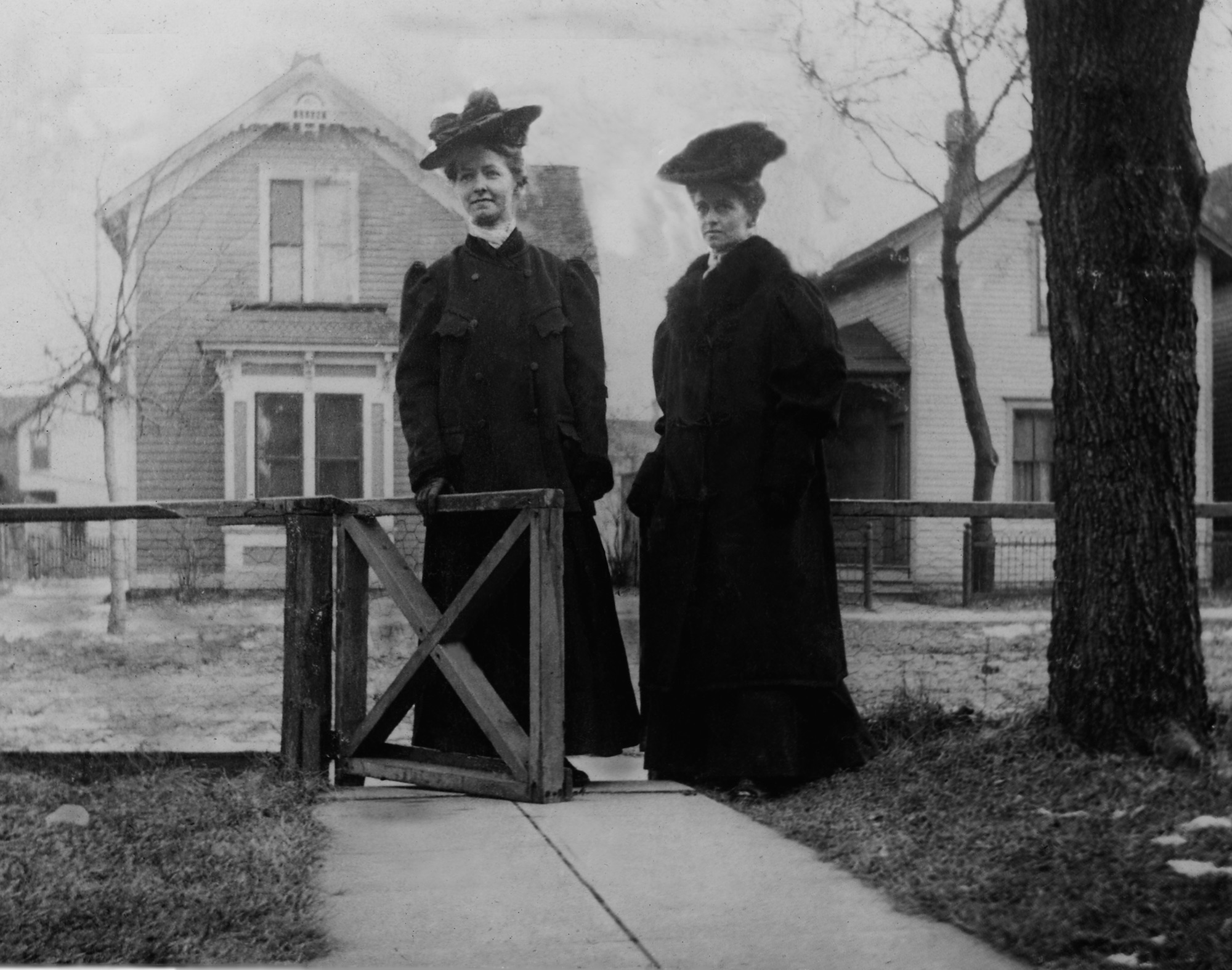 Westbye and a friend, in an unidentified American town, between 1903 and 1908. Courtesy of Sigrid Lien, private collection. Photographer unknown. 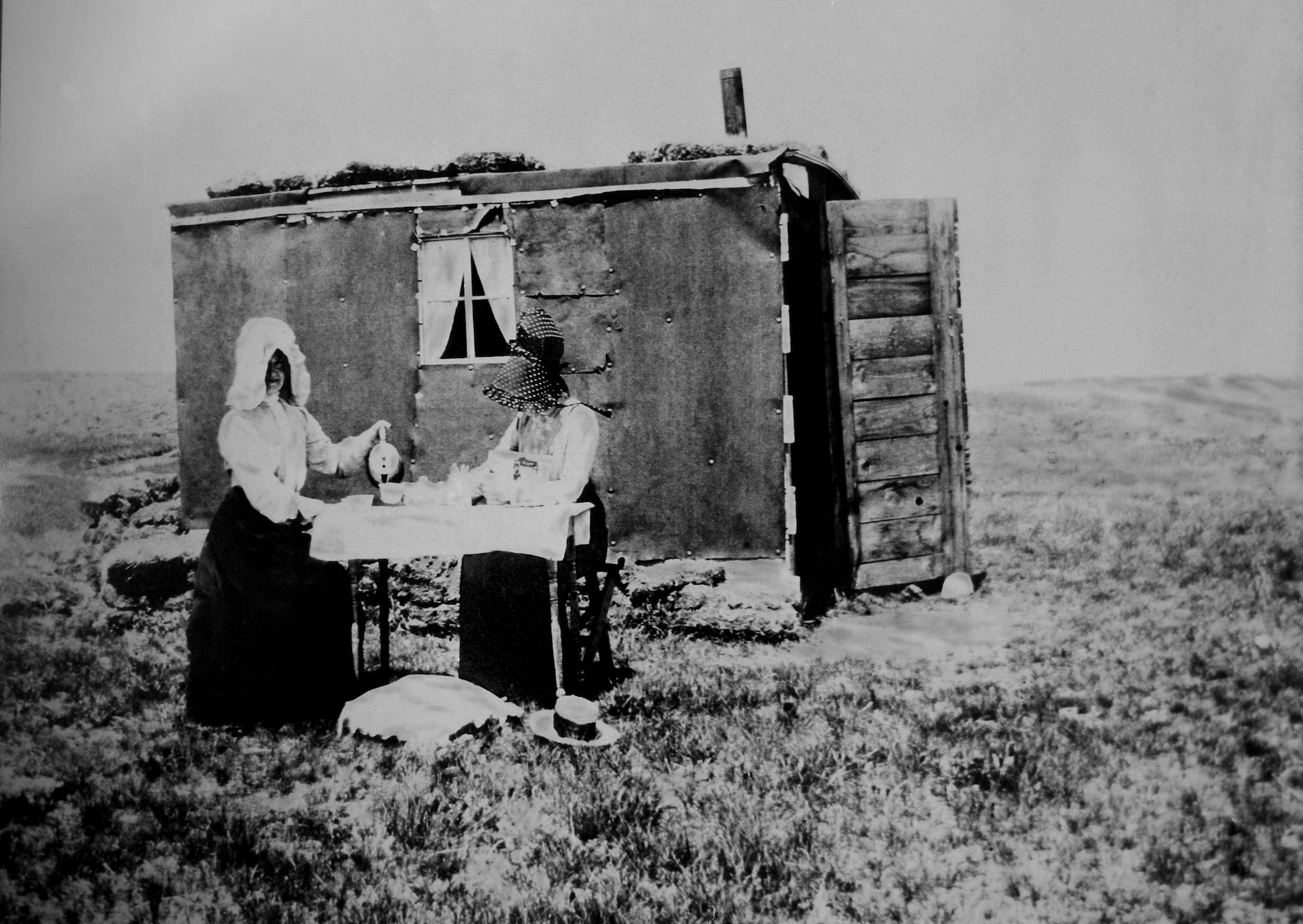 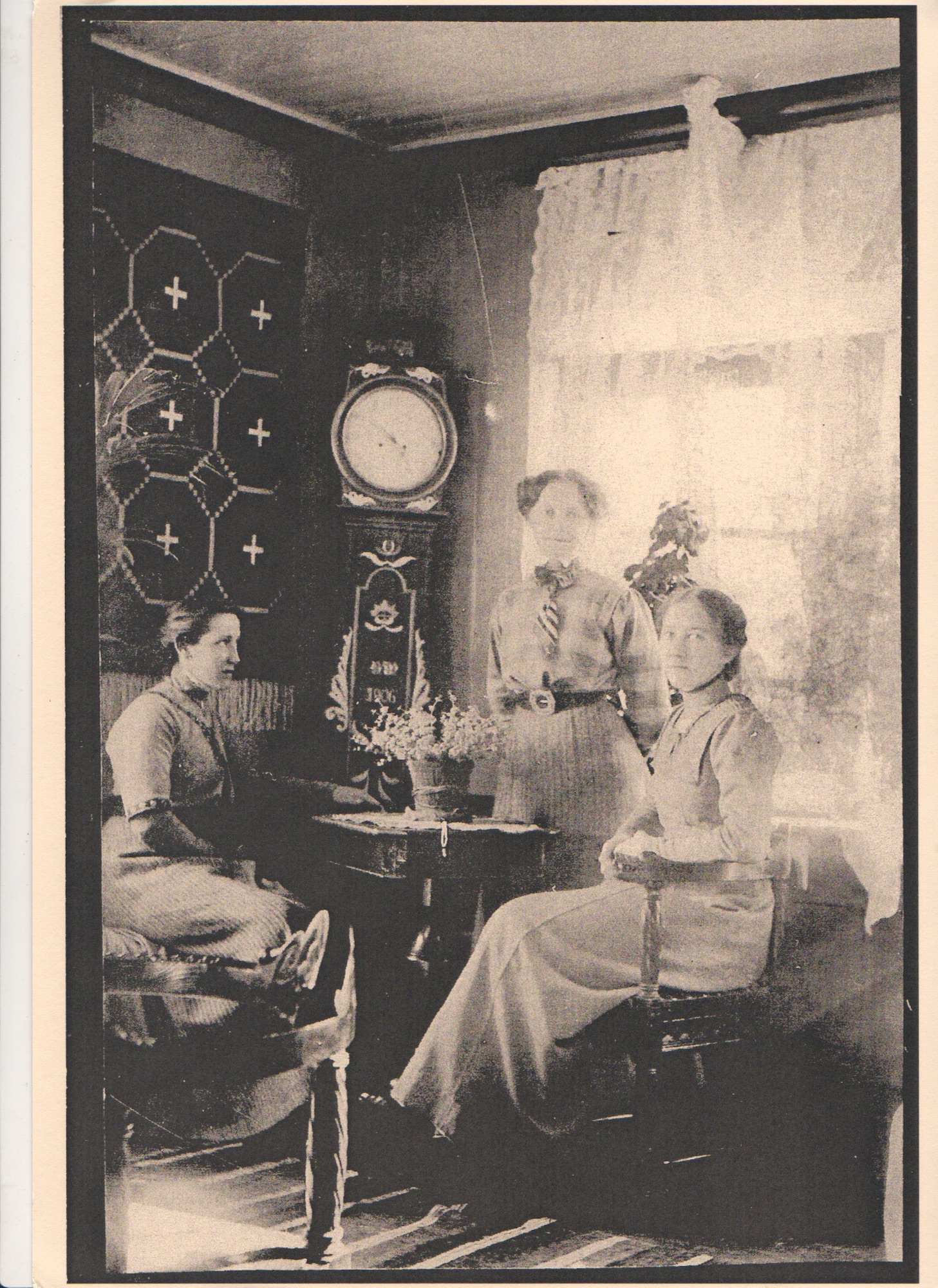 Westbye in 1908, joined by her sisters at their childhood home in Tyrsil, Norway. She had gone back to Norway, but returned to the United States in 1911 to marry Alfred Gundersen. Courtesy of Sigrid Lien, private collection. Photographer unknown. 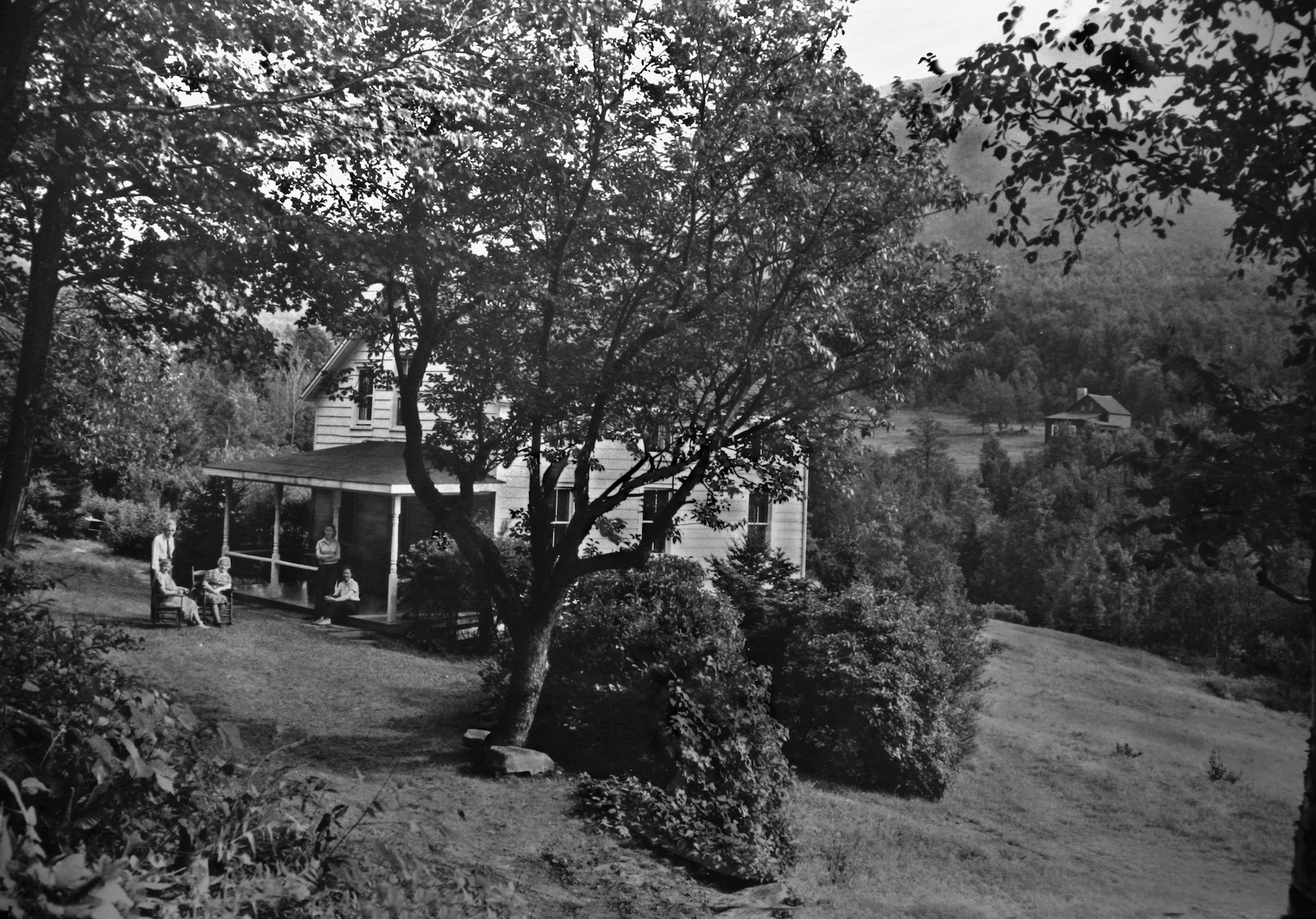 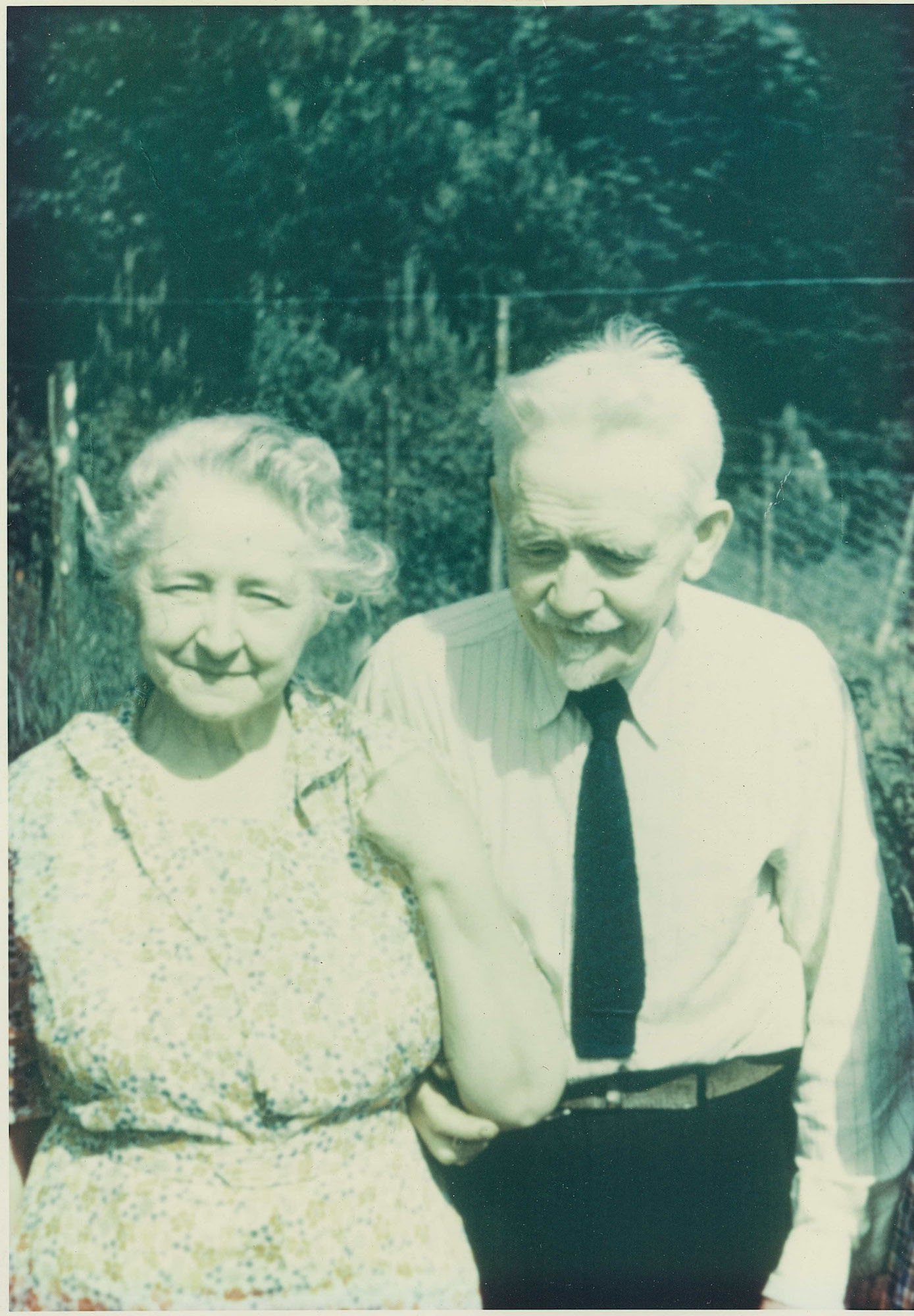 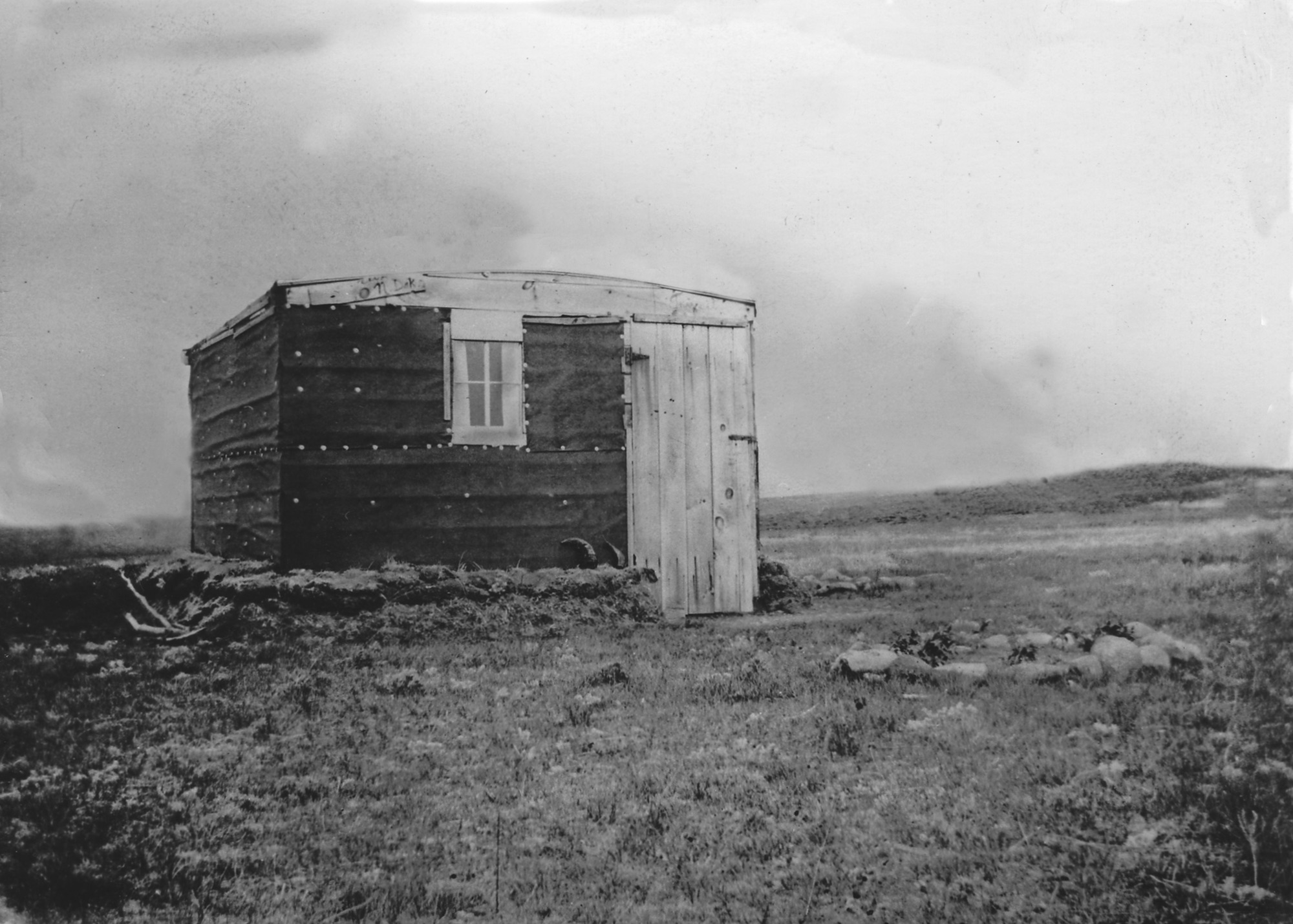 In the photograph a young woman sits all alone on the prairie. The sky is big, the horizon low. She is in front of a modest building: a tiny shack of planked wood, covered with tar paper. A flat, seemingly endless landscape of grassland recedes in the background. The house is small and humble, but the young woman presents herself and her world with deliberate dignity. Her name is Mina Westbye, she was born in 1879 in Trysil, Norway, and she emigrated to North Dakota in 1902.

In many ways, Westbye was typical of the Norwegian immigrants who arrived in the U.S. around the turn of the 20th century—one of many young people who left home and embraced a hardscrabble life on the prairie in hopes of building a better future. Between 1836 and 1915 no fewer than 750,000 Norwegians emigrated to North America as part of a broader wave of European migration that has been called history’s largest population relocation. Up until 1890 only Ireland had a higher emigration rate than Norway. Norwegian emigrants moved to the New World to buy cheap land, to achieve personal success, and to enjoy a greater sense of freedom than they had experienced back home.

In other respects, Westbye was special. We know more about her than of most immigrants of her time, and the photographs that tell her story highlight a striking contrast between high culture and rough living conditions that many Norwegians—and other immigrants who came to the U.S.—must have experienced as they arrived. In the record of her life on the prairie, Westbye sometimes seems like a passing guest, adapting herself to a foreign environment while waiting for her life to take a new, American turn.

Norwegian immigrants sent home thousands of photographs and letters, and I have spent around a decade studying this material. Known in Norway as “America-photographs,” these images convey in immediate, visual terms the migration experiences not of heroes, but of ordinary people. Families pose before their homes or workplaces; ears of corn and wheels of cheese suggest American bounty. My family lives in Norway, and we have a photo of my grandfather Tor Lien, mounted on horseback in Montana in 1915. He had hoped to remain in the U.S. but had to return home after the death of his wife, who had stayed behind with their children.

I first discovered the portrait of Mina Westbye at the archives of the Norwegian Emigrant Museum. Amazingly, when I showed the image to a colleague at the University in Bergen, he recognized the young woman as his great-great aunt. He introduced me to Westbye’s then-90-year-old son-in-law, and to her grandchildren. I went to visit them in the U.S., and they let me study their family letters and photographs.

Gradually I was able to assemble an outline of Westbye’s life. Her father was a military officer of lower rank, who deserted his family in 1888 to emigrate to the United States. At the age of 21, his daughter followed, apparently to live with him—though her descendants say he had alcohol problems and had remarried, so she likely understood the necessity of shaping her own future in America.

At the time, one way to make money was to speculate in real estate by becoming a homesteader. According to migration records, Mina Westbye purchased a plot in North Dakota in 1903. She wrote in her letters that she planned to sell the property and use the capital to make her new start in life.

But homesteading laws required that she had to live on the property for three years before she could cash in—so while she sat there, waiting for her real life to begin, Westbye took photographs and wrote letters. The photo of her sitting outside her house on the prairie captures her circumstances neatly. Through the little window facing the photographer, we glimpse ironed curtains. Westbye wears a white lace blouse and a bonnet, and she poses like a young woman from the urban middle class—straight-backed and deeply absorbed in what appears to be a book or magazine. Her posture and grooming stand in strong contrast to the dismal shanty where she lives. A shovel leans against the wall, but her relationship to the landscape seems to be quite different than that of a farmer’s practical, utilitarian perspective. She is focused on what’s next, a world beyond.

The photographs … highlight a striking contrast between high culture and rough living conditions that many Norwegians—and other immigrants who came to the U.S.—must have experienced as they arrived. In the record of her life on the prairie, Westbye sometimes seems like a passing guest, adapting herself to a foreign environment while waiting for her life to take a new, American turn.

The photograph of Westbye’s house on the prairie went home to Norway, but most of her letters during this waiting period were addressed to her future husband, Alfred Gundersen. Gundersen had a degree in physics from the University of Minnesota in Minneapolis, and was teaching there while he continued his academic education in botany. It was probably in Minneapolis where he met Westbye and began writing letters to her while she was living alone in her claim shanty. Their correspondence stretches over a seven-year period, from 1904 to 1911.

The letters are written partly in Norwegian and partly in English. They make clear that Westbye did not always feel safe homesteading on her own. She writes that she owns a gun, but that she is not completely certain how to use it. She doesn’t hide her lack of interest in farming, but she never complains about it either. She spends most of her time on the prairie walking, around 10 miles every day. She tells Gundersen that it is a half mile to fetch milk and water, 16 miles to the nearest store and post office, and 35 miles to the railroad. She reads a lot (though she complains about the difficulties of getting hold of new literature). She embroiders, undertakes botanical studies, presses plants in her herbarium, and studies the moon and stars through a borrowed telescope.

“This is such a peaceful spot, but it can be lonely sometimes, like today,” she wrote Gundersen on April 28, 1905. Westbye tells Gundersen that she loves being “so far away from people and good manners,” and rhapsodizes about the nights, so “beautiful—clear and starry!” But a more civilized life beckons. “It’s blowing, snowing, and raining so much it’s practically impossible to go outdoors … When it is not windy—which by the way is quite infrequent—it’s so quiet you almost feel afraid,” her letter went.

Before too long, Mina Westbye’s life was firmly set on its new path. She began spending part of the year working as a seamstress and photographer in Minneapolis, and later in the small town of Hanska, Minnesota, where she lived with a liberal Unitarian pastor and his wife. She was finally able to sell her homestead property in 1908, and soon returned to Norway.

But perhaps realizing that life had changed her, or perhaps longing for the freedom she had enjoyed in the U.S., she returned in 1911 to marry Gundersen, who had accepted a position as a conservator at the newly-established Brooklyn Botanic Garden. The couple settled north of New York City, a long way from the shanty on the prairie. They had two daughters and vacationed in the Catskill Mountains of New York, an area they chose because of its resemblance to Norway.

Mina Westbye’s descendants are now perhaps more American than Norwegian-American, though they maintain connections with the relatives in Norway. Not long ago I met a member of the Norwegian Westbye branch, who told me that a baby girl had just been born into that family and named after Mina. In Norway they have not forgotten their strong and adventurous aunt.

Other Norwegian Americans who traveled to the United States at the same time as Mina Westbye also saw their lives changed dramatically by the experience of migrating. Today, many of their descendants are searching for their roots back in Norway, perhaps inspired by these images and letters once sent back and forth, still to be found, framed on the wall, in albums, drawers or cupboards, on both sides of the Atlantic.