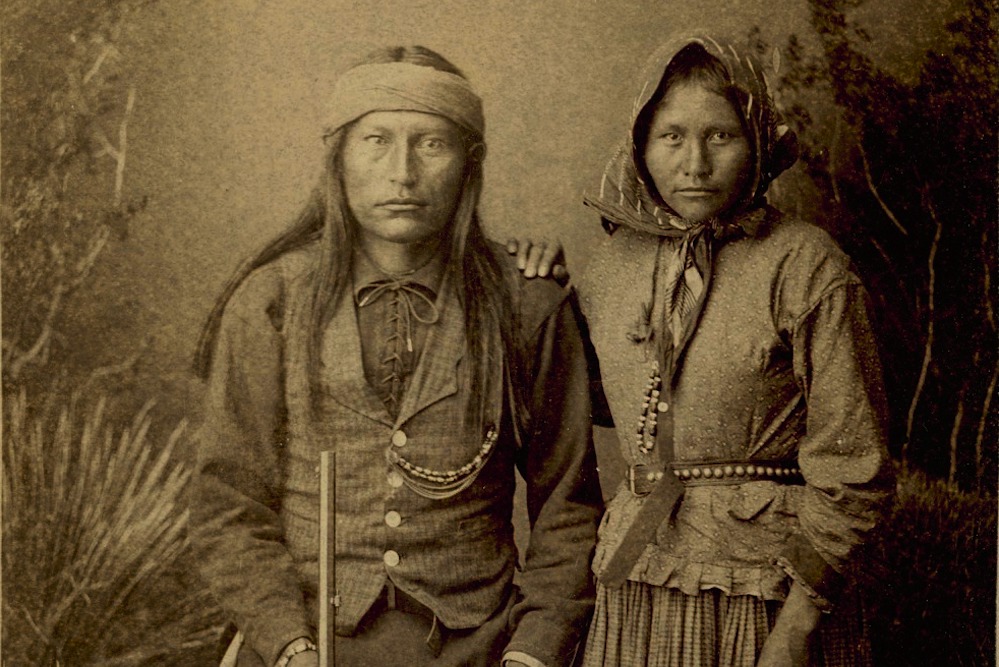 On February 3, 1873, representatives of the U.S. Army met with Chiricahua Apache leader Cochise at the foot of the rugged Dragoon Mountains. It was a tense meeting. Cross-border relations had been troubled ever since the U.S. had annexed a third of Mexico in the 1840s, and the Americans wanted Cochise to use his influence to stop raids from the Apache reservation across the border into northern Mexico.

But Cochise confidently let it be known that he would have nothing of it. He had only “made peace with the Americans,” but, he said, “the Mexicans did not come to ask peace” from him “as the Americans have done.” The old leader held that it was the Chiricahuas who were still the dominant power in the U.S.-Mexico borderlands. All others, including the Americans and the Mexicans, were newcomers. If they wanted to live on this land, they had to talk to Cochise. He was the authority. The Americans abandoned their plea, and returned to their army posts located outside Cochise’s reservation. Cochise’s authority, built over decades, reveals that this international border was fluid for a long time, and testifies to the scope and resilience of the Apaches’ power in their dealings with both official and unofficial representatives of the governments of the U.S. and Mexico.

American dominance near the border was never assured, even after the government had annexed the Apache homelands following the U.S.-Mexican War in 1846-1848 and the Gadsden Purchase in 1853. Over the years Cochise had always been able to maintain autonomy—even forging a treaty with the U.S. in 1872 that allowed him to dictate the kind of reservation he wanted for his people, and where it should be located. It was a testament to the Chiricahuas’ long standing clout that Cochise yet again could turn his would-be overlords away. For the better part of 50 years, in fact, the Apache tribe tolerated quests in their domain—from the Dragoon Mountains in Arizona to the Black Range in New Mexico—at their discretion. In many meetings with American invaders, from trading and diplomacy missions to massacres, from friendships to intense hatreds, it was often the Chiricahuas who maintained the upper hand, even as the Americans were supposedly in control.

The Apaches’ complicated relationship with the Americans began early in the 1800s, with the arrival of trappers-turned-scalp hunters. At the time, during the first decades of the 19th century, thousands of Chiricahua Apaches lived in northern New Spain on “peace establishments”—where the Spanish provided them with food, horses, and manufactured items. After Mexico’s independence, this system collapsed and the Chiricahuas launched raids to take the supplies they had grown accustomed to having. Mexicans, in turn, massacred peaceful Apaches and issued scalp bounties.

By the 1830s American trappers, including the notorious James Kirker, got involved in border trade with the Chiricahuas. An Irish immigrant who had arrived in New York in 1810, Kirker was first a frontier merchant in Missouri, before he began trapping beaver in the Rocky Mountains. One of his trapping expeditions brought Kirker to the Apache lands, where he quickly grew familiar with the Chiricahuas. Kirker’s ranch near Santa Rita, New Mexico, came to function as a crucial trade nexus, where Chiricahuas traded the livestock they stole from Sonoran and Chihuahuan ranches for food, guns, ammunition, blankets, and whiskey that Kirker and his associates hauled from the States. Yet the Chiricahuas also grew to hate Kirker. During the 1840s, Mexican authorities offered 100 pesos for the scalp of an Apache man, 50 for that of a woman, and 25 for those of children 11 years or younger—which led Kirker to recalibrate his business focus. With his band of mercenaries Kirker relentlessly hunted Apaches across the borderlands, using trade as a ploy to bait prospective prey before he slaughtered them. When Apaches proved too perilous a catch, Kirker was not above taking scalps from defenseless Mexicans peasants and claiming they were Apache scalps to earn his pesos. In a newspaper interview in 1847, Kirker boasted having killed 487 Apaches—most likely a gross exaggeration, but perhaps not.

All others, including the Americans and the Mexicans, were newcomers. If they wanted to live on this land, they had to talk to Cochise.

American newcomers like Kirker both empowered and hurt the Chiricahuas. Eager to trade, the Americans turned out to be useful to have around for supplying food items and manufactured commodities the Apaches could not produce themselves. But the Americans’ sense of justice was flawed, and their moral integrity completely absent; they cowardly and viciously slaughtered the elderly, women, and children, and lied to make a buck. Chiricahuas knew violence, and revered a fighting man, but this was something else—and it fueled the Apaches’ sense that they maintained standing in their dealings with the U.S.

Not all the Americans in the Chiricahuas’ orbit wallowed in contraband and blood, or swaggered publicly of their murdering deeds, like Kirker. In 1851 John Bartlett’s international boundary survey crew, nearly 300 men, took up residence near Kirker’s old place, at the Santa Rita copper mines, abandoned since the 1830s. Bartlett came from a Rhode Island middle-class background, was politically connected, and had sought appointment as minister to Denmark. He got the boundary commissioner job instead, tasked with drawing and affirming on the ground the new international border between United States and Mexico.

Bartlett’s view of the natives was colored by James Fenimore Cooper’s visions of a “noble savage,” an idealized vision of American Indians as premodern and innocent, uncorrupted by civilization. Yet the reality Bartlett encountered was multifaceted. Delegations of Chiricahua Apaches visited him, bringing food to share and goods for trading. Among them were many Chiricahua leaders, such as Mangas Coloradas, Cochise’s father-in-law. Bartlett seemed to know how to play his cards. “To show our good feelings towards them, I would make them some presents, and accordingly directed … to distribute among them some shirts, cotton cloth, beads, and other articles, which pleased them,” he wrote in his official report, later published by the federal government. The atmosphere in these meetings was filled with mutual curiosity and attempts toward cordial diplomacy as the Apaches became, Bartlett noted, “daily visitors to our quarters, entering the tents and houses … with perfect freedom and the most entire confidence.” The surveyors could do their work freely and in safety, and they had plenty of Chiricahuas to keep them company.

Still, tensions were never far away, especially as Bartlett began to question Mangas about the Chiricahuas’ raids and plundering in Mexico, at one point even snatching two of the Chiricahuas’ Mexican captives. Mangas must have wondered why this guest was trying to tell his hosts how to go about their own business. Bartlett, for his part, believed he was merely fulfilling the requirements of Article Eleven of the Treaty of Guadalupe Hidalgo—the peace agreement that ended the U.S.-Mexican War in 1848—which bound U.S. authorities to “forcibly restrain” Indian raiding across the border, to rescue Mexican captives held by Indians, and to punish those raiders who managed to slip across the borderline.

The Chiricahuas did not recognize the treaty and would never succumb to its demands. Captive-taking was a widespread practice, and stolen people were often bartered between indigenous and Mexican communities, some sold into slavery and others adopted as kin. The Chiricahuas saw it as their right to decide how to treat captives—and they refused when Bartlett tried to calm the situation by offering to compensate the Apaches with merchandise worth a little over $200. It was too little, too late. Soon the Apaches began to steal animals from the surveyors, reportedly taking as many as 150 horses and mules. By the time the boundary crew, after a stayover of several months, exited the Chiricahua area and continued their westward course, the Chiricahua outfits had already left the mines for Sonora, where they talked armistice with Mexico, saw nothing concrete come out of it, and raided local ranches and travelers. Again, American authority had fallen short in the Apaches’ estimation.

As the 1850s wore on, there came to be an unofficial understanding between the Chiricahuas and the Americans along the border. Chiricahuas could live independent lives and raid Mexico as often as they liked, while drawing rations from the U.S. government as payment for leaving overland traffic, including mail delivery, unmolested. The first mail run, operated by James Birch across southern New Mexico, left San Antonio on July 9, 1857, arriving in San Diego seven weeks later. Birch’s “Jackass Mail,” which relied entirely on mules, was superseded in 1858 by the significantly larger Butterfield Overland Mail, which used some 250 coaches, thousands of head of stock to pull them, and 141 stations, of which nine were located in the Chiricahua lands between Mesilla and Tucson.

Butterfield coaches followed this “Oxbow Route” from St. Louis via Fort Smith to El Paso, Mesilla, Tucson, and Yuma to Los Angeles and San Francisco, crossing the Chiricahua domains regularly, usually without any trouble from the Apaches. James Tevis, an Anglo connected with the Butterfield operation, commented that the Chiricahuas were instructed by their leaders “never to lay hands on anybody or anything within the boundary of the United States.” One U.S. soldier visiting the Butterfield station at Stein’s Peak in June 1859 also noticed that the Apaches were “on most friendly” terms with the mail company people. Occasionally hunger and disappointment over the randomness and meagerness of the rations caused Chiricahuas to steal some cattle, but these were minor incidents.

The Chiricahuas also had friendly relationships with area mining companies, who respected them as hosts. The Sonora Exploring and Mining Company had been started by Charles Poston and his associates in 1857, claiming Tubac, an abandoned town, as its headquarters. Poston had wisely made private treaties with various Apache communities, giving the Apaches gifts and promises not to interfere with their raiding in Mexico in exchange for peace and protection, while hiring some Apaches to work in his mines. The Chiricahuas left the company’s Mexican miners alone, though the operation ran into labor troubles with its Sonoran workforce and barely turned enough profit to cover expenses, and operations had mostly ground to a halt by the end of the decade.

Of course, none of this would last. By the 1880s, U.S. settlement on Apache territory ramped up with the Tombstone silver boom, the coming of the transcontinental railroads, and the growing copper mining industry. Men like Bartlett, Poston, and even Kirker were long gone, replaced by a monolithic U.S. that advanced its influence by diplomacy and violence. Soon, the Chiricahuas were in a war against the U.S. government, which no longer tolerated indigenous sovereignty within its realm and instead contained, destroyed, segregated, and deported the Chiricahuas it looked upon as competition. By 1886 any Chiricahuas still alive were taken by the U.S. Army as prisoners of war, and removed to Florida.

But in the cracks and layers of this settler colonial empire, individual Chiricahuas and Americans had traded with each other, befriended and antagonized each other, and sometimes slaughtered each other. Their Arizona contacts marked a world and a border that was never black and white, where Apaches like Cochise maintained their power even in the face of a superpower-to-be.