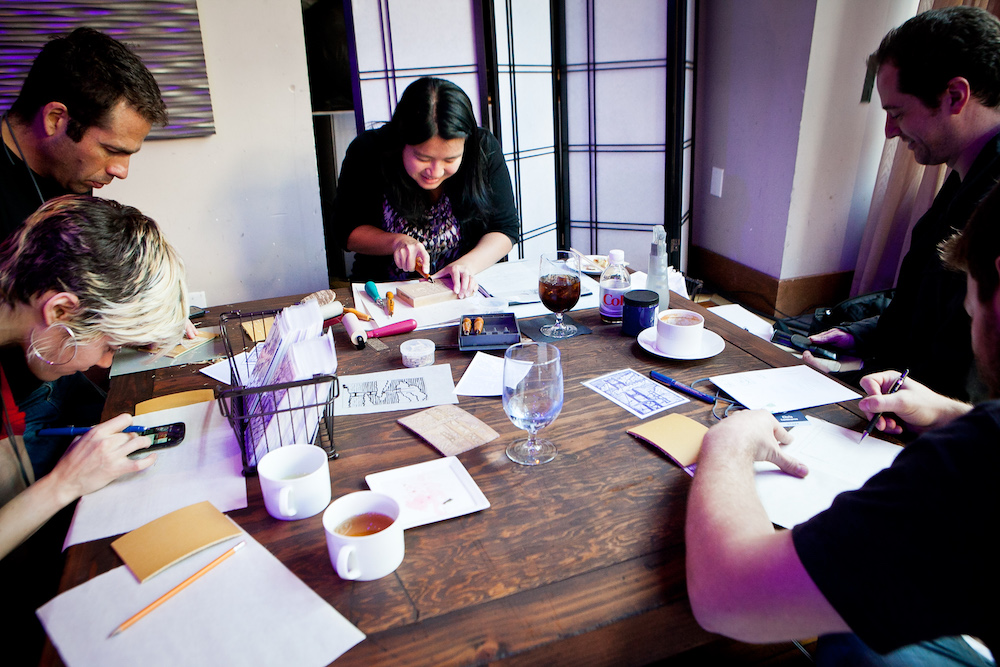 When 19-year-old Swiss medical student Johannes Hofer first coined the term “nostalgia” in 1688, he had wanderers on his mind.

With this neologism, Hofer was describing the deep melancholy—a “wasting disease”—of students and soldiers, “principally young people and adolescents sent to foreign regions.” These fledgling travelers wandered international campuses, landscapes, and cultures, encountering new experiences that changed how they viewed the world.

Like so many college freshmen today, sometimes they got homesick, wishing for some semblance of stability and normality amongst a tumult of new things and ideas. But even when they returned home (nostos, in the Greek) they were often confronted by the painful (algos) realization that they could never really go home again. Because things had changed.

Most contemporary accounts of nostalgia forget these origins. Instead, nostalgia conjures images of wistful old men: “Back in my day …” Sometimes it’s imagined as tyrannical, circulating repressive pasts (e.g. President Trump’s “Make America Great Again” jingoism). Or it’s trivialized as spinning the muddy wheels of pop culture (endless film remakes and BuzzFeed listicles recounting “28 Things That’ll Make Every ’90s Kids Say, ‘Wait, I Had That In My House Too!’”).

Often, nostalgia is mocked, as in this commercial for the Cree LED light bulb: “The light bulbs in your house were invented by Thomas Edison in 1879. Now think about that with your 2013 brain. Do you still do the wash down by the crick while your eldest son keeps lookout for wolves? No. You don’t. This is a Cree LED bulb. It lasts 25 times longer. Nostalgia is dumb.”

Seen this way, nostalgia is stupid, regressive, stuck in the muck. And yet ingenious potentials sprout from that grime if we only think back to the transformed horizons of Hofer’s intrepid young travelers. Their stories remind us that nostalgia is often about change.

In fact, most contemporary social psychologists argue that nostalgia isn’t just the homesickness that Hofer depicts. It’s the full balancing act people perform when they are faced with instability and must consider their past, their present, and their future possibilities.

Whether switching jobs, confronting political turmoil, or traveling abroad to study, people facing existential flux look back to secure ideal pasts and the identities therein. In this light, true nostalgia is a tool of wellbeing. It’s also omni-temporal. That is, nostalgia is simultaneously a pride for the past, a feeling of loss in the present, and a hopeful longing to recover an ideal future.

My work over the last decade has focused on the final link of this chain—the recovery of lost futures. I’ve unearthed the ways designers (from computer programmers who knit to ER physicians who negotiate patients’ values) have communed with nostalgia, wandering through the ashes of lost ideals, traditions, and timelines in order to forge better futures. Such nostalgic design inspires creativity because it provides opportunities for innovators to question the inevitability of the current form of things and to explore alternative ideal pasts and the new futures that might stem from them.

Let me give you some examples:

In 2013, the cloud platform Heroku held its Waza developer conference in San Francisco. Waza, Japanese for art and technique, featured the typical motivational talks, demonstrations of novel coding methods, and philosophical musings on new kinds of programming. But the event also juxtaposed these high-tech discussions with hands-on sessions of nostalgic making.

Participants communed at tables across the San Francisco Design Center and learned from experts at origami, quilting, woodblock printing, book binding. Attendees, that is, were invited to wander nostalgically through the creative making of the past.

“Why do we care about crafts?” Heroku COO Oren Teich asked in his opening address. “Because I want you to be thinking not just about ‘how do I write the best line of code,’ but ‘how do I open myself up to world of what’s possible.’ … If you’re just working with what you know, you have a very narrow view of the world, but if you can look at origami or printmaking, you’re going to be a better programmer.”

Essentially, Teich was priming his audience to use longing for the slow care of handicraft to rupture their everyday fast-tech beliefs and see their programming in a fresh light. Innovation + tradition = revolution.

Whether switching jobs, confronting political turmoil, or traveling abroad to study, people facing existential flux look back to secure ideal pasts and the identities therein. In this light, true nostalgia is a tool of wellbeing. It’s also omni-temporal. That is, nostalgia is simultaneously a pride for the past, a feeling of loss in the present, and a hopeful longing to recover an ideal future.

Though this formula may seem lofty—and Teich’s conference might sound like empty Silicon Valley bullshit—such ruptures have often borne ingenious fruit. We could ask, for instance, what if traditions of Japanese origami had transformed aerospace engineering in the 21st century?

We don’t have to look too far for an answer; the career of physicist Robert J. Lang illustrates such a trajectory. Lang, who has experimented with origami since age 6, received a PhD in applied physics and then worked at NASA’s Jet Propulsion Laboratory. Plying an origami-based nostalgic design, he then consulted with the German manufacturer EASi to make a better folded airbag and collaborated with the Lawrence Livermore National Laboratory on folding a football-field sized telescope into a small rocket.

But such nostalgic design works both ways. Lang has also used his mathematical know-how to transform traditional origami, becoming a world-renowned master for his intricate works from scaled fish to cuckoo clocks. His ability to hold tradition and innovation in his mind simultaneously, each sculpting the other, makes him a virtuoso of both.

Latvian mathematician Daina Taimina’s groundbreaking work on non-Euclidean geometry is a similar example of the power of nostalgic design. For almost two centuries, mathematicians struggled to find ways to model the abstract concept of non-Euclidean hyperbolic space. But it wasn’t until 1997 that Taimina had a eureka moment: she could use crochet to craft durable non-linear planes. Taimina’s crochet (now housed at the Smithsonian) allowed students to touch a form of mathematics they previously could only picture in their heads; it sparked interest in geometry in female fiber artists across the world; and it highlighted the systematic exclusion of women’s ways of knowing from the sciences. 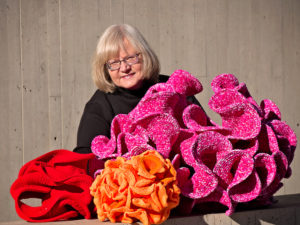 This last point shouldn’t be underestimated. Nostalgic designers like Taimina, Lang, and Teich are driven by listening for lost, undervalued, and excluded peoples’ ideals. We might call this a neostalgic ethic, longing for futures that could have been. Along this path, nostalgia becomes a form of expertise: the ability to creatively navigate an adaptable repertoire of temporal lifeworlds (craft and coding, origami and engineering, geometry and fiber art) rather than keeping them artificially separate.

In contrast to such temporal adaptability, one of the core models of innovation over the last 40 years has been Everett Rogers’s diffusion of innovations curve, which charts who adopts new tech, why they do it, and what designers can learn from them. Rogers calls his ideal users “innovators” and “early adopters”—the bleeding edge consumers who experiment with the latest tech, influence others to purchase it, and give feedback on changes that might make it better. Inventors listen to early adopters incredibly carefully.

But there’s another set of users who are ignored in this model: those citizens Rogers bluntly labels “laggards,” whose decisions not to adopt shiny new tech “are often made in terms of what has been done in previous generations.” By overlooking these people—a population who often can be a combination of working-class, older, disabled, or minority users—innovators leave the transformative worldviews of innumerous peoples and cultures on the cutting room floor. Such a model excludes a huge swath of the population from the future.

Conversely, Taimina, Lang, and Teich each embody not only the benefits of nostalgic design but also the cross-cultural interlacing of ideal traditions and innovations. Preferably, such layering puts disparate communities, cultures, and peoples directly into conversation.

Take the rise of makerspaces in U.S. middle school and high school libraries. As reported by the School Library Journal, “About three-quarters of librarians overall say they coordinate maker activities with other teachers.” As these high-tech spaces proliferate, however, the traditional “makerspaces” of the public school—woodshop, autoshop, and trade programs—are fading. In California, for instance, three-quarters of high school shop programs have disappeared since the 1980s.

By the logic of nostalgic design, rather than replacing autoshops with maker labs, we would do better to host them in the same space, layering innovation and tradition. And, as Taimina’s crochet work hints, we might add a Home Ec lab for good measure.

The value of these merged spaces would lie less in the equipment (technology goes out of date so quickly) and more in the collaborations among people there and the social bridges built as a result. The networks of cross-cultural friendship, giving, and trust that could emanate from such places are increasingly important in an era where digital echo chambers and political filter bubbles breed ideological isolation.

We need spaces where different people from different traditions can wander, wonder, and work together to produce different thinking. This is innovation. This is how we use tradition to rupture our way into the future.

“Nostalgia can be a poetic creation, an individual mechanism of survival, a countercultural practice, a poison, a cure,” wrote the late Svetlana Boym, the artist, playwright, novelist, and Harvard comparative literature professor, who launched contemporary nostalgia studies. “But it is up to us to take responsibility for our nostalgia and not let others ‘prefabricate’ it for us.”

It’s up to all of us, that is, to use the past to wander into new futures.