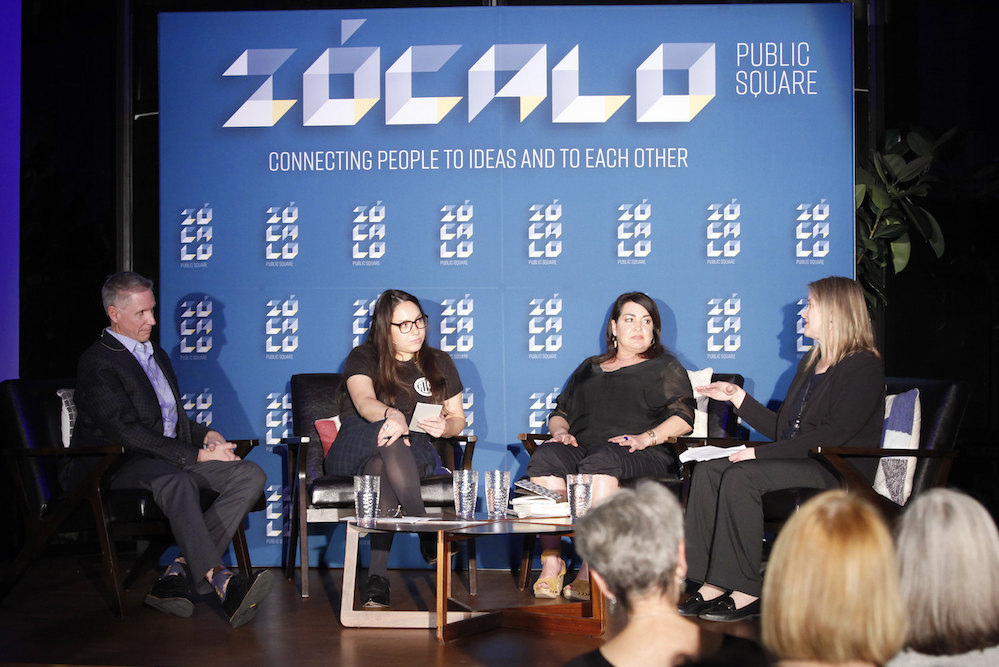 Over the last 50 years, futurity has become an important theme among native people and artists, said Harvard historian Philip J. Deloria during a Zócalo event entitled “How Are Native American Artists Envisioning the Future?” and held at Cross Campus in downtown Los Angeles last night.

Deloria said that this deep interest in the future is unsurprising. If the goal of settler-colonialism is the removal and erasure of Indigenous peoples, the historian said, then one of the most powerful weapons to counter erasure is the creation of powerful visions of a future for native people. “Not just a present,” Deloria emphasized, “but a future.”

Deloria was responding to a question from event moderator Manuela Well-Off-Man, chief curator at the Museum of Contemporary Native Arts, which is based in Santa Fe. She kicked off the evening’s discussion by asking: “What is your idea of Indigenous Futurisms?”

Over the course of the evening, the three panelists responded to the question by discussing specific artistic projects, representations, and explorations.

Aja Couchois Duncan, writer and librettist for the new experimental opera Sweet Land, said that challenging erasure was on her mind when she was writing Sweet Land with fellow librettist Douglas Kearney.

“We were interested in the act of erasure and resistance and the ways in which that resistance looks different in different contexts,” she said. “In art you can sketch the line and erase the line but there will always be some residue of that action.”

“A common saying in our communities is you always want to plan seven generations ahead. That’s now a pan-Indian, shared concept,” visual and performance artist Kite said. “But to me what’s important about futures is that these ideas—indigenous ideas of futures, Lakota ideas of futures—are already built into our epistemologies, ontologies. So the solutions are already there for being able to consider what’s going to happen seven generations down the line.”

Duncan, who is of Ojibwe, French and Scottish descent, said she also sees the power of Indigenous Futurisms when it comes to topics like climate resilience. “What is interesting to think about Indigenous Futurisms is all futures require us now,” she said. It’s this moment, she says, where native people are saying “yes, we actually know how to deal with climate change and shifting conditions of land and animals and plants.”

Another panelist, the visual and performance artist Kite, introduced the concept of the seventh generation principle to the conversation. “A common saying in our communities is you always want to plan seven generations ahead. That’s now a pan-Indian, shared concept,” said Kite, who is Oglala Lakota. “But to me what’s important about futures is that these ideas—indigenous ideas of futures, Lakota ideas of futures—are already built into our epistemologies, ontologies. So the solutions are already there for being able to consider what’s going to happen seven generations down the line.”

Deloria, who is Dakota, offered a historical perspective on native arts and futurism through his book Becoming Mary Sully: Toward an American Indian Abstract, which reexamines the art of his great aunt Susan “Susie” Mabel Deloria. “I’m not here as a person who thinks about the future. I’m here as a historian who’s thinking about someone from the ’30s,” he said to laughter.

Deloria’s aunt, who went by her pen name Mary Sully, was a futurist of her day, exploring modernism in her transformative and often deeply political three-panel “personality prints” of public figures that she made from the 1920s through the mid-1940s.

In the past, as today, Deloria explained, there are two major forms of resistance to colonialism. One form, anti-colonialism, challenges the status quo and takes on how things are. The other, what he called “de-colonial,” thinks past today’s status quo and conflict. Both forms of resistance—the anti-colonial and the de-colonial, require a conversation about what the future looks like, Deloria said. “And not just think about what it looks like,” the historian added, “but claim the future as one of the most important things in dialogue.”

During a question-and-answer session, one audience member asked the panelists about their thoughts around “data sovereignty,” a term for the concept that digital information should be subject to the laws of the place where it is located.

Kite spoke about how native people share a vision of data sovereignty with the general population as well. “People don’t want their things stolen,” she says. “My goal is through Lakota ontology to say, first of all, everything involving technology, including our data is a material thing. Our human bodies, our being, we are material. And to consider all things as worthy of being. We cannot steal from anything.” 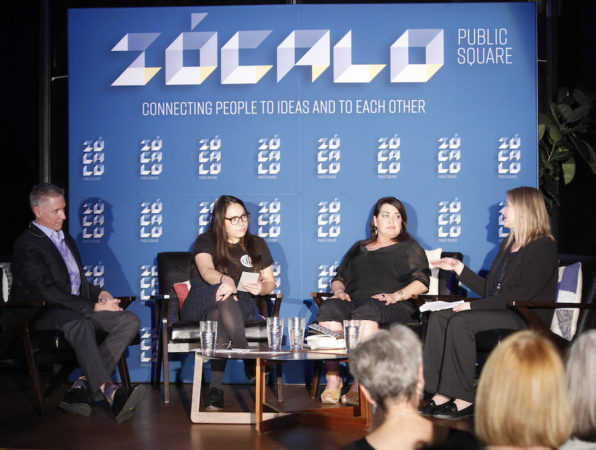 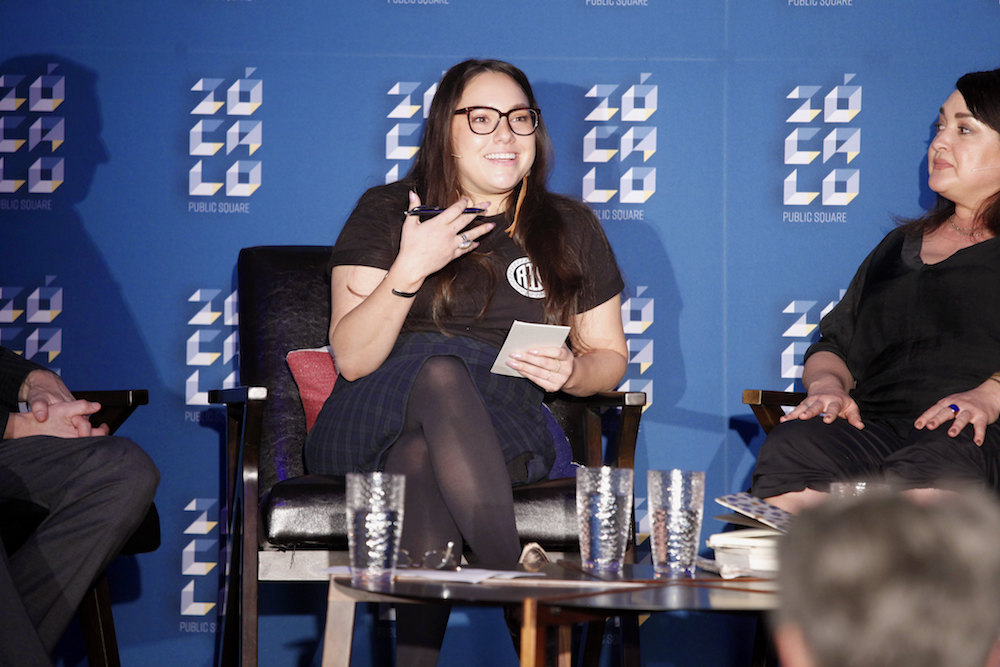 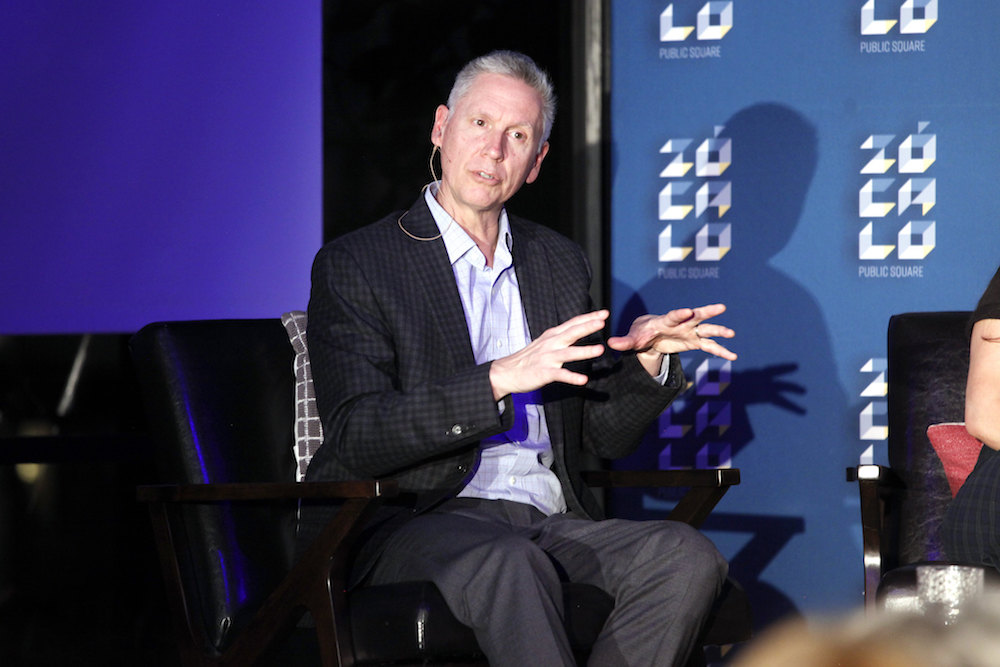 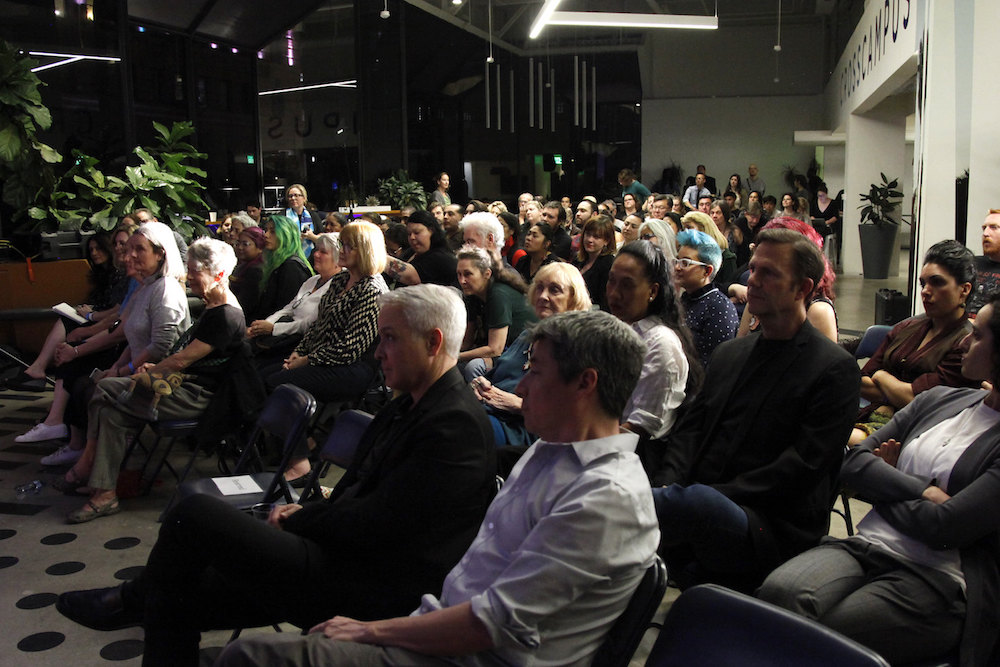 Standing room only at Cross Campus in downtown Los Angeles 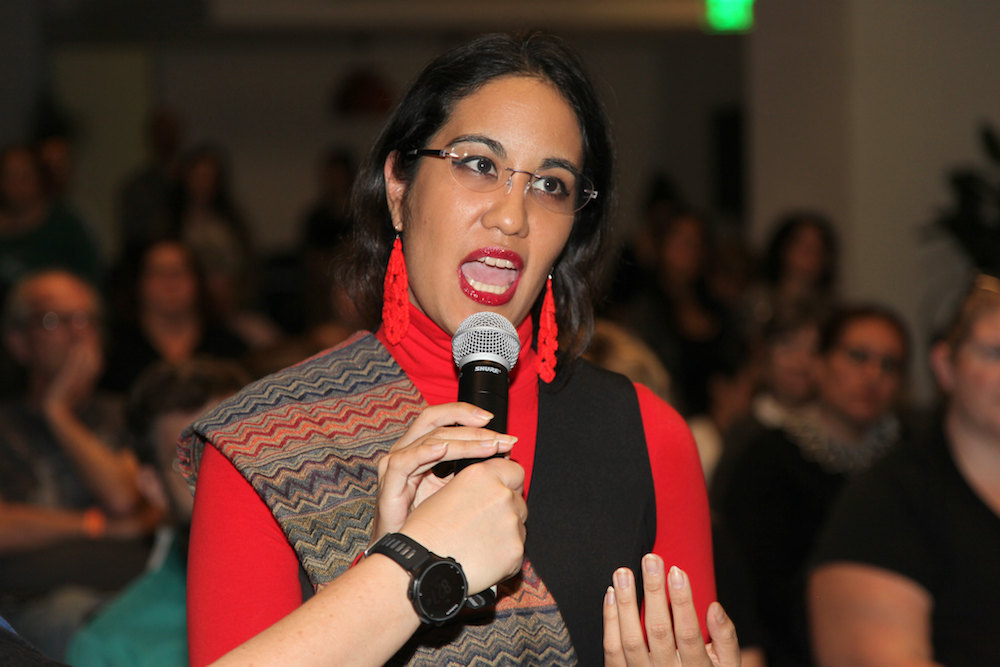 An audience member, during the question and answer portion of the evening 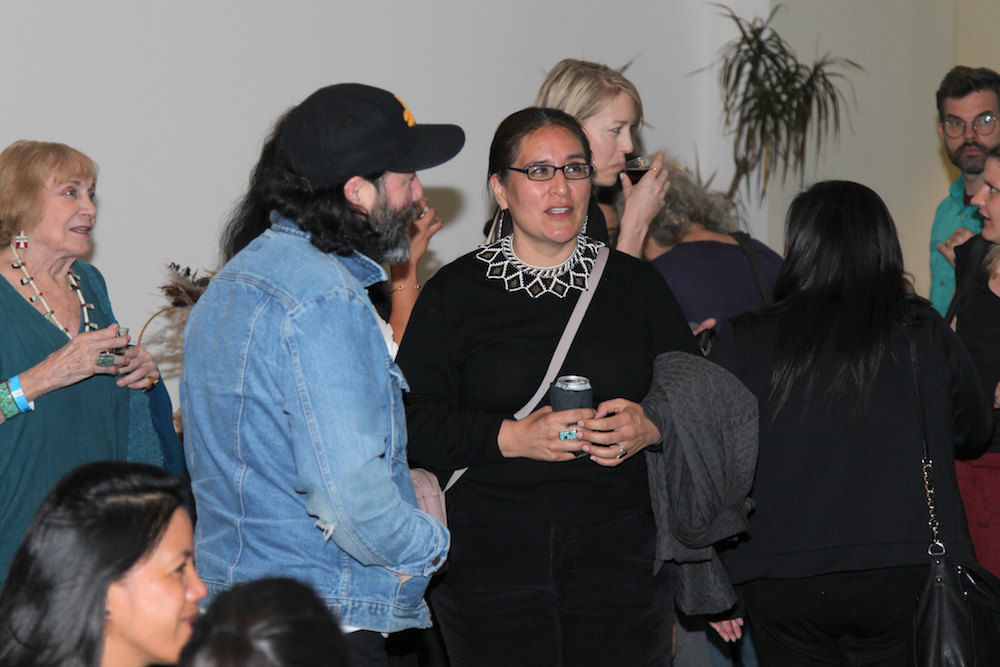 Guests mingle during the post-discussion reception