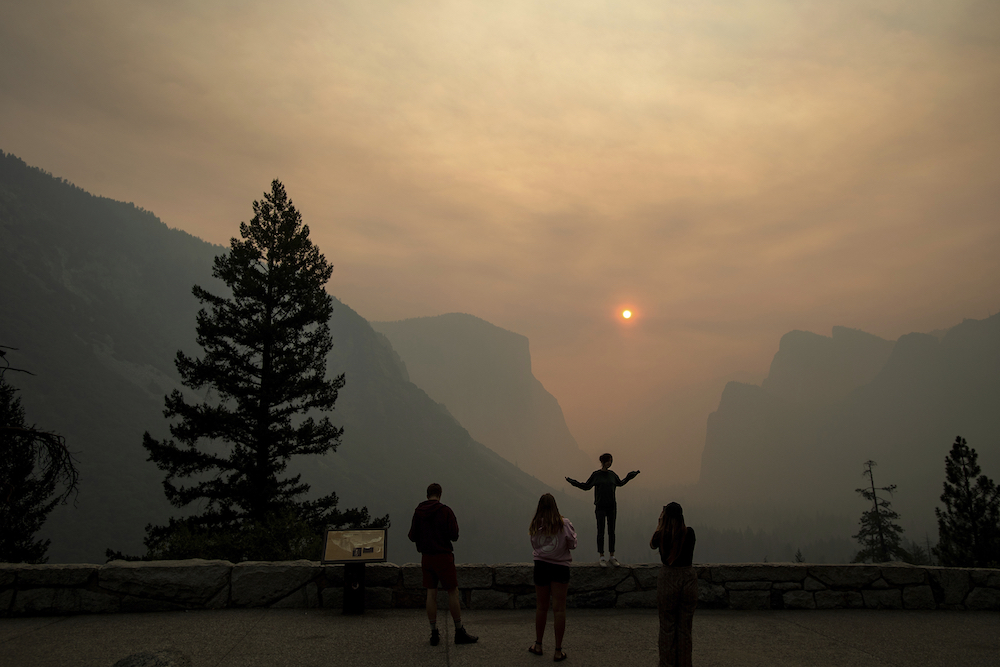 A hiker poses for a photo against the backdrop of smoke from the Ferguson Fire at Yosemite National Park in 2018. Courtesy of Noah Berger/Associated Press.

America, I see you flailing—and failing—to respond to this pandemic. Why don’t you just let California handle it?

No joke. In normal times, you’d be wise to avoid letting Californians run anything. While our artists and businesses are strong at creating culture and technology, our elected leaders typically struggle with everyday issues like managing budgets, schools, housing, and traffic. And in our daily lives, Californians famously flout the rules in favor of going our own way.

But in emergencies, we transform into very different people—calm, competent, and cooperative. You’ve seen it during the novel coronavirus crisis, as Californians in both the public and private sectors have moved faster, more aggressively, and with clearer intent than leaders in Washington.

We’ve moved so fast, in fact, that other states have followed our lead. The strategies of social distancing and shelter-at-home began in the Bay Area, were adopted statewide, and have since been copied from Louisiana to West Virginia, and from Illinois to New York.

Our government agencies, businesses, and unions have led the way in securing necessary medical equipment while the feds have failed. And our state and local leaders have consistently provided the public with timely and accurate information, which cannot be said for the White House, the Centers for Disease Control and Prevention, and the Food and Drug Administration.

California was among the first out of the gate with a plan to limit the spread of the virus. Early in March, California banned public gatherings, and closed restaurants and bars except for takeout and delivery—while other big states, like Texas and Florida, dithered. Regular Californians have been relatively diligent about complying with restrictions that keep them at home.

While the president and his allies have lashed out at others, our governor—an ideologically and politically combative man—has studiously avoided blaming others and acted pragmatically. (Even Trump had to concede: “They’ve done a good job, California.”) Despite our reputation as being hostile to business, our state has lifted regulations and rules, on everything from commercial trucking to construction, with great speed.

Why are Californians so much better in a crisis? In a word: experience. We’re masters of disaster because we’ve had so much more practice with calamities than other Americans.

Indeed, disasters—both natural and man-made—are in our state’s DNA. The California we know was not formed by any deliberate plan, but through responses to our never-ending emergencies: The banking collapses in the years after the Gold Rush first forced us to diversify our economy. Epic floods in the early 1860s begat the system of waterworks that have made the state’s rapid growth possible. Economic depressions of the 1870s produced our current constitution.

Why are Californians so much better in a crisis? In a word: experience. We’re masters of disaster because we’ve had so much more practice with calamities than other Americans.

The progressive California government we know today is in large measure an accidental product of the biggest disaster in our history. In 1906, an earthquake and fire completely destroyed what was then our biggest, richest and most populous city, San Francisco.

In the aftermath of San Francisco’s destruction, survivors did more than rebuild the city. They constructed an entirely new modern state government for California, with new agencies and commissions, university campuses, and a system for civil defense and emergencies. This early modernization of government and marshalling of expertise turned California into an early capital of American technocracy.

As our technocratic state has evolved, our emergency strategies have advanced too. The State Council of Defense, launched after the earthquake, morphed into the State Emergency Council. Then with 1945’s California Disaster Act and a 1950 agreement, state emergency services were reconstituted into a single state agency, connected to a powerful network of local mutual aid. Through evolution and consolidation, that agency became, in 2013, the Office of Emergency Services, a full Cabinet-level department.

California has honed its emergency response through the trials and many errors of dealing with regular earthquakes, relentless fires, endless droughts, and sudden mudslides, not to mention two of the largest urban riots in our nation’s history. In the process, Californians have come to understand that frequent calamity is the price of living in such a beautiful and open place, and we’ve come to take bipartisan pride in our preparedness.

“California has excellent emergency response infrastructure and experience,” Rob Stutzman, a Republican strategist and a former senior aide to Governor Arnold Schwarzenegger, tweeted recently. “One might say, it’s an excellent deep state of expertise and ability.”

That emergency infrastructure can wither. In routine times, California’s dysfunctional budget process has led to foolish cutbacks in capacity, including the shuttering of 11 state public health labs and three mobile hospitals that would be useful now. But in emergencies, California ignores its fiscal rules and ramps up, with the help of a public highly attuned to disaster.

In California, even disorganized people, like your faithful columnist, have emergency plans for their families. And though we may be careless in other parts of our lives, we bolt our houses to their foundations, and install automatic gas shut-off to prevent fires after earthquakes.

Our culture of preparedness extends to our businesses. From Apple to Tesla, companies have quickly corralled medical equipment and protective gear and shared them with medical providers. Facebook donated a huge cache of masks that it had bought to prepare for last year’s massive wildfires.

California, not generally known for its discipline or practicality, also has been diligent in focusing on what’s necessary. While the federal government bashes the Chinese government, California is chartering planes to get medical supplies from China. While the Trump administration and other states pursue the overturning of Obamacare at the U.S. Supreme Court, California has re-opened enrollment in its health insurance exchange. While governors in Texas and Florida refuse to tap emergency funds, our state government recently beefed up emergency supports for workers, seniors, the homeless, renters, and homeowners with mortgages.

Californians expect—and even want—that intensely pragmatic guidance. While officials in Washington, D.C., and other states questioned whether Governor Newsom was moving too fast and too forcefully, criticism from inside California has dwelled on whether the governor and the state have moved fast enough.

Indeed, Newsom and the state have often trailed our cities and counties in enacting new measures; San Francisco, a place that knows its own history, declared a COVID-19 emergency way back on February 25, before it had any confirmed cases. This “bottom-up” leadership makes sense in California, given our century-long tradition of mutual aid and the fact that our local governments are so experienced with disasters.

In times of emergency, some Californians, including this columnist, have wondered why we can’t move this quickly, and behave this responsibly, in normal times. Why does it take an earthquake or an epidemic to suspend all the budget formulas and insane environmental regulations that make the act of building something such a costly endeavor? Why do we have a state that’s so good at solving disasters but can’t manage everyday problems?

But right now, there’s no time to think about the yin of our highly flexible hyper-competence in emergencies and the yang of our dysfunctional governance the rest of the time.

I, for one, must restock my family’s “red bag” of masks and other emergency supplies that I’ve had stored in my laundry room for earthquakes, but that I’ve just unexpectedly tapped for COVID-19. I’m equipped for this disaster, but as a Californian, I know there is another one just around the corner.